CHICAGO — A former Illinois State University student was sentenced Tuesday to probation and home confinement for his involvement at ISU in an international gambling ring.

U.S. District Judge Virginia Kendall ordered Matthew Namoff, 25, to serve two years of probation and six months of home confinement instead of sending him to prison for up to a year. The judge also handed Namoff a $10,000 fine.

Prosecutors said Namoff brought 60 gamblers to the Chicago-based large-scale operation, which resulted in federal charges against 10 people. Namoff also was a 50/50 partner with DelGuidice, prosecutors said.

The gambling business lasted from at least 2016 to 2019, pocketing DelGiudice $8 million, according to the indictment.

DelGiudice pleaded guilty in February to conspiring to conduct an illegal gambling business and money laundering. A sentencing hearing has yet to be set for him. 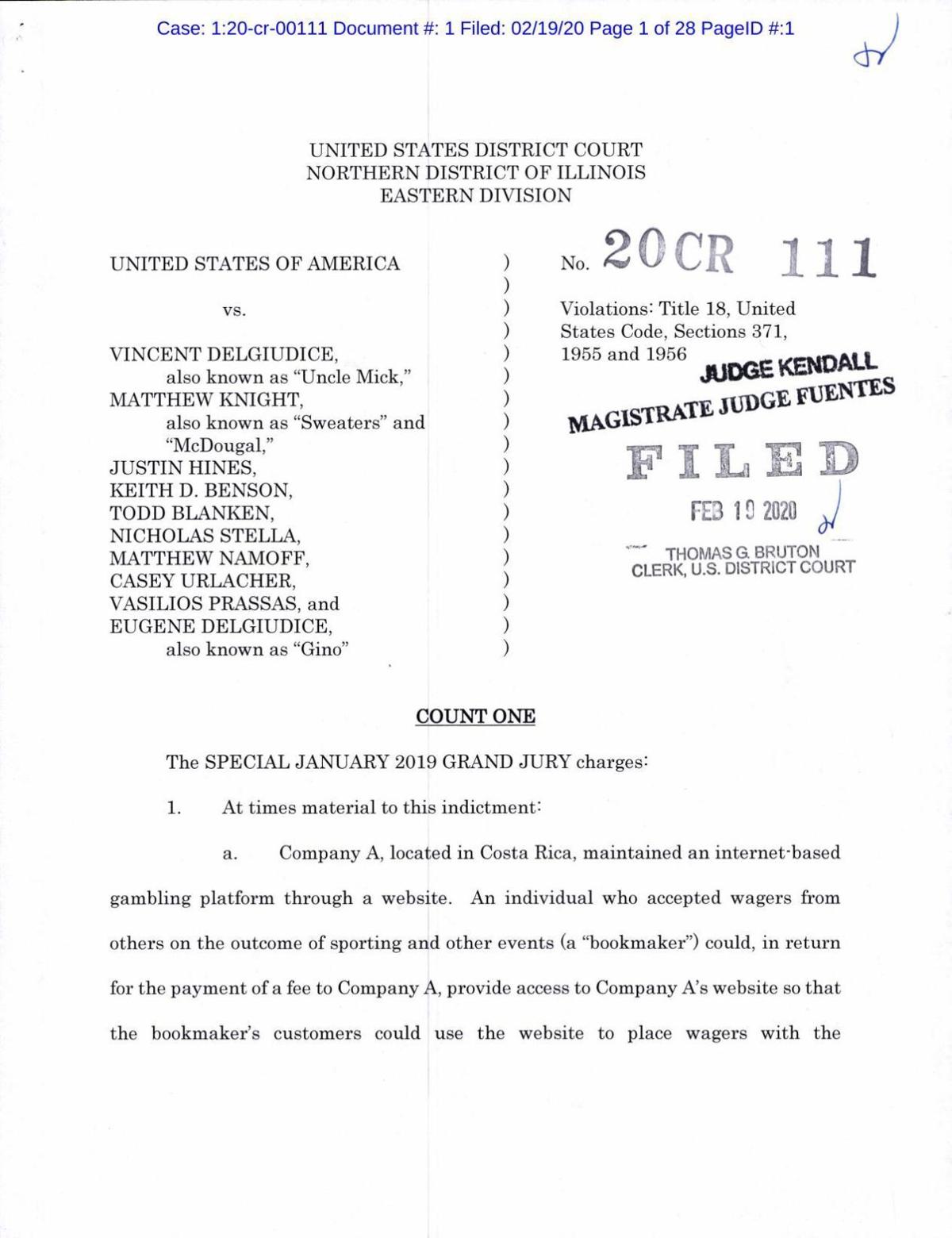 Assistant U.S. Attorney Terry Kinney said Namoff had more gamblers than most of the others charged in the scheme. Prosecutors asked the judge to issue a prison sentence of between six and 12 months.

Defense lawyer Darryl Goldberg said the bets Namoff took averaged about $20, characterizing them as “peanuts in the picture of things,” compared to his co-defendants.

Goldberg emphasized that Namoff made a “dumb” decision to use gambling as a way “to find connection and camaraderie among fellow students.” He said Namoff “had a hard time socializing,” based on a history of being bullied and trauma from when he was held at gunpoint in a robbery.

He also pointed to Namoff’s non-existent criminal history, his age, his current employment, and that he paid taxes on his earnings in the gambling ring, which Kendall acknowledged during the sentencing.

Goldberg said in a court memo that what began as $1 to $3 wagers “morphed into something else.”

Goldberg said DelGiudice was a family friend who Namoff knew would provide support and financial backing.

Namoff apologized while addressing the court Tuesday at a federal courthouse in Chicago.

“I stupidly saw gambling as a way to socialize in college, but through all this I now know it’s not a victimless crime,” Namoff said, concluding his comments to the judge by saying, “You’ll never see me again.” 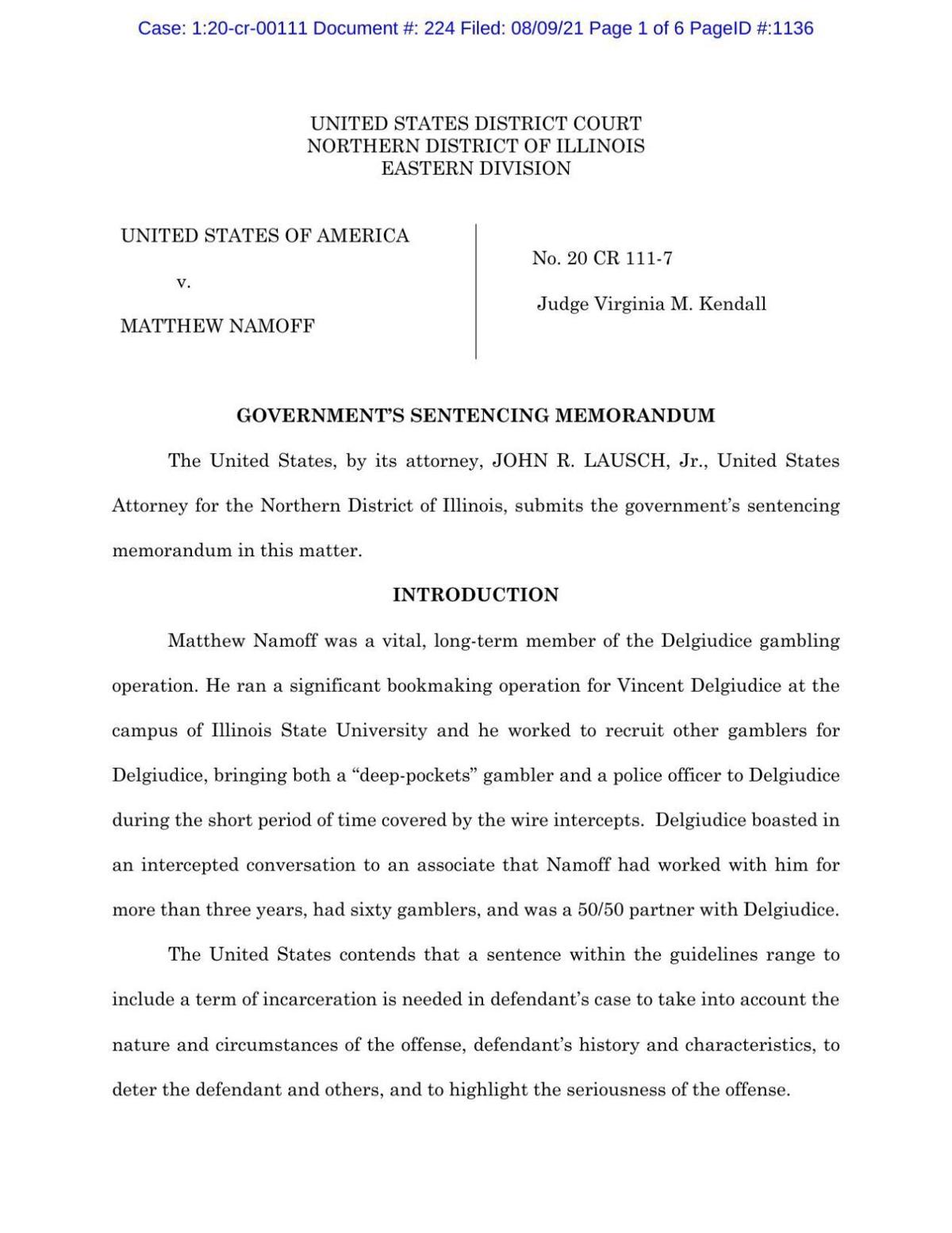 Namoff pleaded guilty in April to conspiring to conduct an illegal gambling business.

The judge acknowledged that “it was a sophisticated gambling operation.”

“I think the fact that it was run on a college campus is aggravating,” Kendall said. “The fact that we are really looking at young people who could become seriously addicted at that age in their lives to gambling, to the risk-taking, when they are that age makes it a serious offense.”

However, Kendall said Namoff would not be well-served in prison “as such a youthful offender.”

“I’m not going to send you to prison,” Kendall said. “I do think you need to have a sentence that has you reflect on the serious nature of this offense.”

Namoff became the fifth defendant in the case to be sentenced – one of which was sentenced to prison.

Nicholas Stella, a former Chicago police officer, was sentenced in July to 15 months in prison.

Among those charged in the indictment was Casey Urlacher, the brother of Chicago Bears legend Brian Urlacher. Casey Urlacher also was mayor of northern Chicago suburb Mettawa. 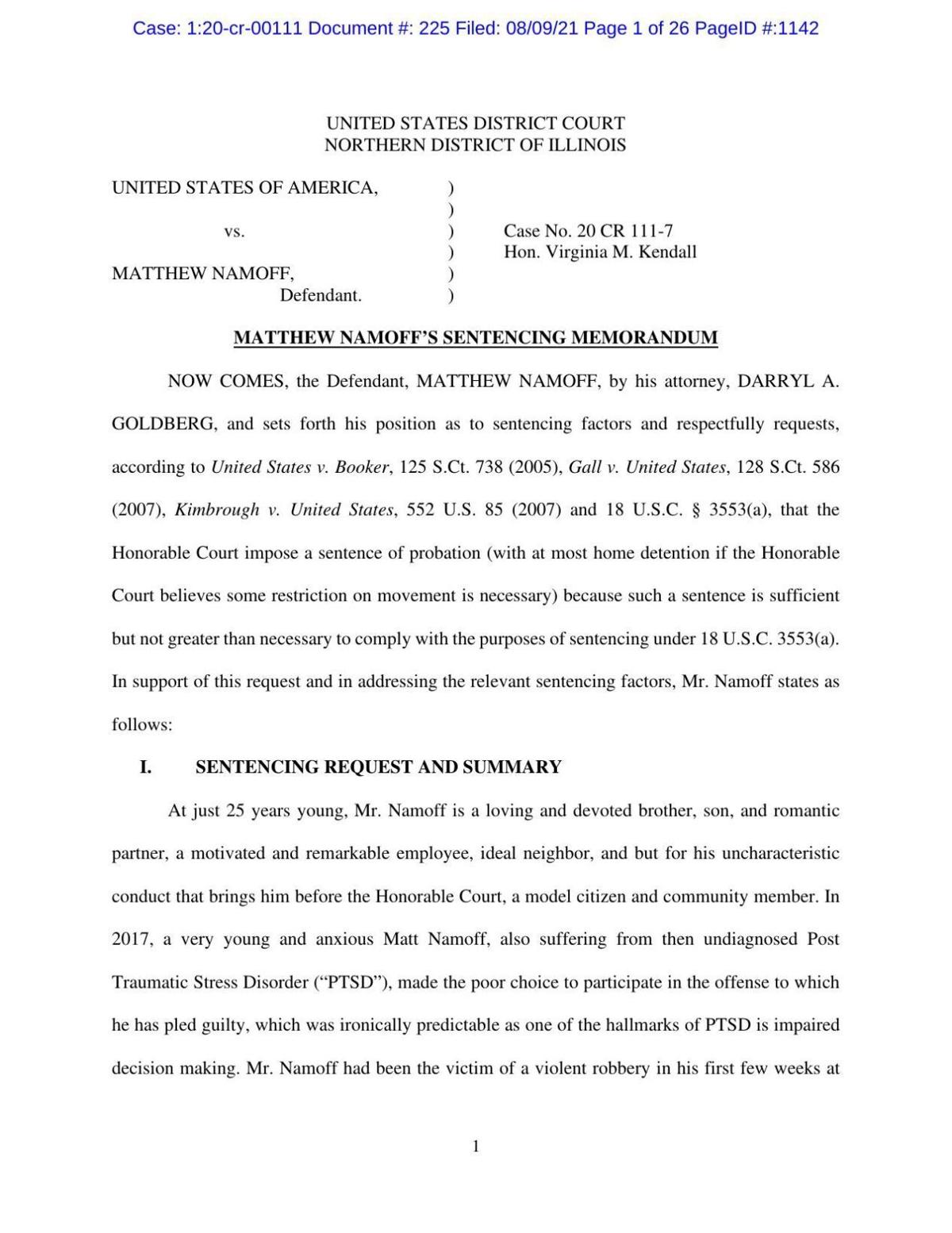 According to the indictment, Delgiudice paid a Costa Rica-based sportsbook a service fee to use its online platform and recruited gamblers to place wagers on his website.

Agents searching his home in 2019 found $1.1 million in cash and nearly $500,000 in silver bars, gold coins and jewelry, the indictment said.

Updated mug shots from The Pantagraph

Newest invasive pest is creepy, crawly and now it's in Illinois

Jumping worms — also known as crazy worms or snake worms — first were seen in Illinois in 2015 and have spread across the state.

Union workers: Deere needs to show us 'we're part of this family'

Members of that union say they were already experiencing mandatory overtime, an increasing workload, and lack of support from managers.

Prosecutors are asking a judge to prohibit defense attorneys from referring to the men shot by Kyle Rittenhouse as rioters or looters.

A 2-year-old girl and five other people were shot late Friday afternoon on the city’s South Side.