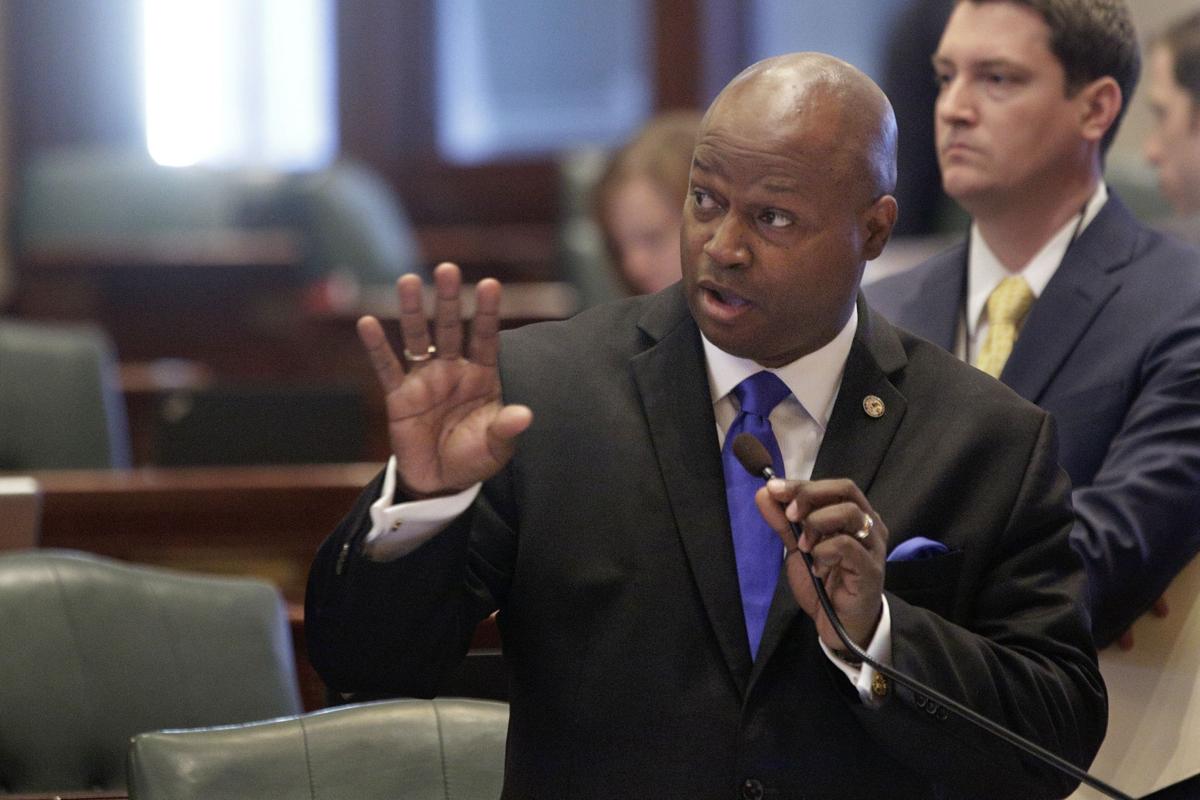 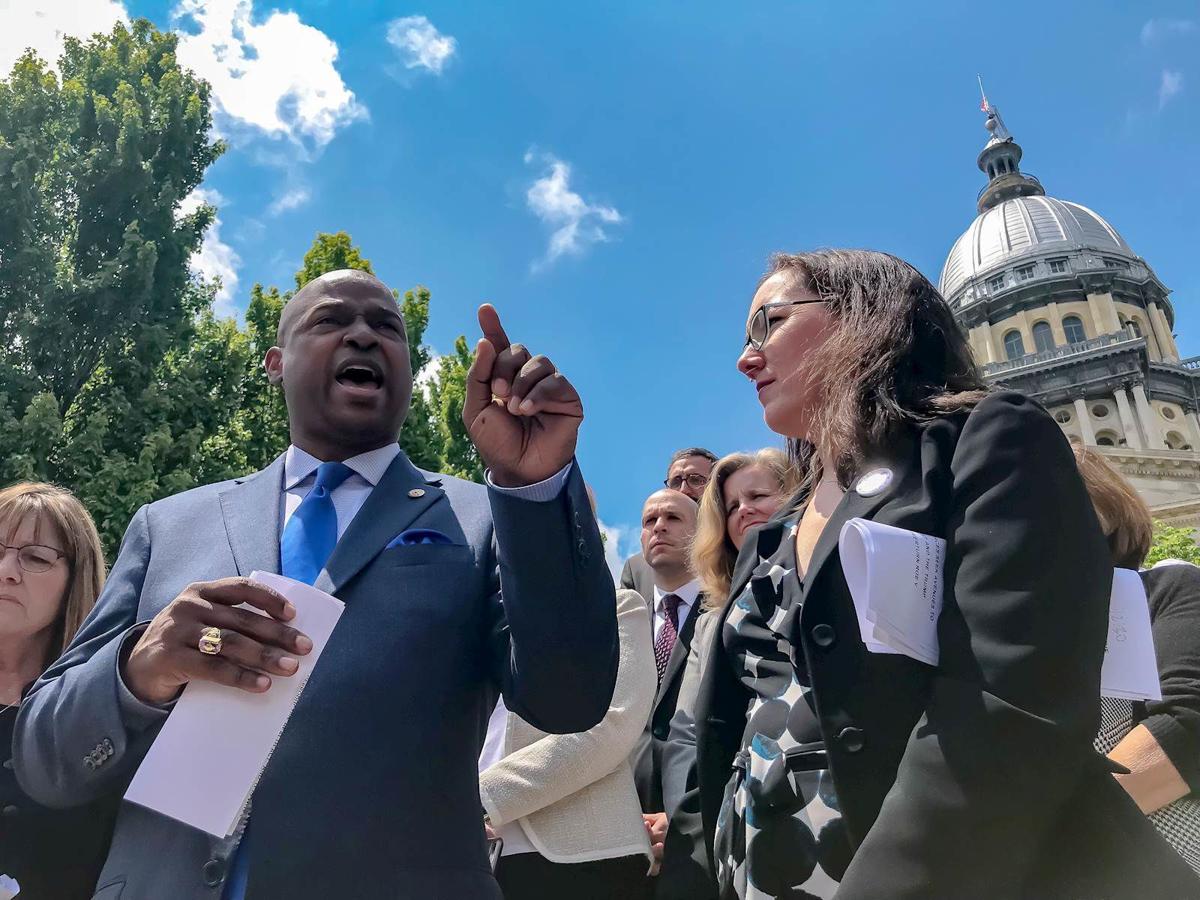 Rep. Emanuel "Chris" Welch, D-Hillside, says he is a longtime supporter of women's issues because they are "fundamental." He co-sponsored the Reproductive Health Act, which he spoke in favor of at a rally on May 27 in Springfield.

SPRINGFIELD – One day after state House Speaker Michael Madigan, D-Chicago, announced a suspension – but not a withdrawal – of his campaign for another term as speaker, a state representative who has been accused of being a staunch Madigan protector has launched a bid for the post.

But in a closed-door meeting of the Black Caucus Monday evening during a pause in floor debate of its massive legislative agenda, Welch was put forward as a candidate in the race that is not scheduled for an official public vote until Wednesday.

“I am honored to be called upon my colleagues from the Illinois Legislative Black Caucus to put my name in for consideration,” Welch said in a Tuesday morning statement. “This historic moment in Illinois and across the country calls for new representation and unity of democratic beliefs. I want to thank Speaker Madigan for his leadership – it has been a challenging year for us all but I am grateful for his commitment to serving the public.”

Despite Madigan’s campaign suspension, Steve Brown, a Madigan spokesperson, said in an email Tuesday morning that Madigan “has no plans to support another candidate. Announced or otherwise.”

Meanwhile, another declared candidate, Rep. Ann Williams, of Chicago announced her withdrawal Tuesday night, as the wrangling for votes continued on the House floor.

Welch has most recently been in the news as the chairman of a House committee launched by Republicans to investigate Madigan’s ties to Commonwealth Edison, the state’s largest public utility which admitted in a bombshell court document in July to seeking to influence the speaker to pass favorable legislation to the company in exchange for jobs for Madigan’s associates.

Madigan has not been charged and denies wrongdoing, but the House investigating committee sought to prove conduct unbecoming of a legislator, not to charge him with a crime.

Welch and two other Democrats on the committee voted to end the investigation after just three meetings in four months.

“It was our duty to conduct this investigation to support and try to rebuild the integrity and trust of the House of Representatives,” Rep. Tom Demmer, R-Dixon, the committee’s ranking GOP member said at the time. “But what we saw under the leadership of Chairman Welch was a process that sought not to hear from additional witnesses, sought not to have adequate number of hearings and sought to bring the committee to a conclusion before we had the information necessary to make a qualified judgment.”

But Welch contended Republicans, by calling the investigating committee, were engaging in a “power grab” and “political show” ahead of November elections in an attempt to weaken Madigan.

Now, the Hillside Democrat has been thrust into the spotlight as a leading challenger to Madigan’s decades of power, along with Rep. Ann Williams, D-Chicago, who received 18 votes in an initial ballot taken Sunday night behind closed doors prior to Welch’s candidacy and Madigan’s suspension of his campaign. Madigan received 51 votes in that ballot, while Rep. Stephanie Kifowit, D-Oswego, received three votes.

Williams, who received 18 votes in an initial ballot taken Sunday night behind closed doors prior to Welch’s candidacy and Madigan’s suspension of his campaign, announced her withdrawal from the race Tuesday night. Rep. Stephanie Kifowit, D-Oswego, who received three votes in that ballot, also dropped out. She was the first candidate to challenge Madigan.

“I couldn’t be more grateful for all those who encouraged and supported me along the way. I am proud of what we accomplished and the steps we took to begin a new chapter in the Illinois House. We made history,” Williams said in a statement Tuesday. “The House Democratic Caucus continues to debate the best path forward and I am confident that we will reach a decision together and get to work for the people of Illinois. I will continue to push for strong and independent women to lead - not just in the Illinois House, but at all levels of government.”

Neither a woman nor a person of color has ever served as speaker in Illinois.

The House speaker is chosen by members of the Illinois House of Representatives every two years. There will be 73 Democrats and 45 Republicans seated for the vote for a new speaker, and 60 votes are needed to gain the speakership.

Normally, votes for leadership are decided before they get to the House floor. And Madigan has, until now, had the votes locked up for his speakership in every election since 1983, except for a two-year period in the 1990s when Republicans took control of the chamber.

A speaker can be elected with either Republican or Democratic votes, but historically the majority party has unified behind a candidate.

Tuesday marked the final day of the 101st General Assembly, and the Black Caucus was working to pass several pieces of transformative legislation from health care reforms to economic equity measures and an overhaul of several criminal justice statutes in the state.

Action on those measures may continue into Wednesday morning prior to the seating of new and reelected lawmakers for the 102nd General Assembly, which was scheduled for noon Wednesday. Once new lawmakers are seated, they must name a speaker before action can continue.

Thomasboro Mayor Tyler Evans, who has faced calls to resign since he posted the video, issued a statement Thursday apologizing for his comments and condemning the violence at the Capitol.

The Illinois General Assembly on Wednesday approved a sweeping overhaul of the state’s criminal justice system that would end cash bail and eventually require every police officer in the state to be equipped with a body camera.

Members of the Illinois House and staff were told to self-quarantine if they were at the Bank of Springfield Center on Thursday because someone who was at the facility tested positive for the coronavirus.

New state House Speaker Welch made commitments for reform to force out Madigan. Can he keep them?

One of the first tests for Welch will be rather mundane and arcane, yet all important — writing the rules under which the chamber will operate. Without offering specifics, he said the rules should provide an initial indication of how he plans to distinguish himself from Madigan’s leadership.

Despite promises that cannabis legalization in Illinois would fund more minority business participation and neighborhood improvements, the state has yet to spend $62 million collected for those purposes.

Scandal-plagued Speaker Michael Madigan on Monday suspended his bid to keep running the Illinois House, even as he left open the possibility he could reemerge if Democrats can’t agree on a replacement.

Republican leadership offered harsh criticisms for their Democratic counterparts Tuesday as the Illinois General Assembly neared the end of its lame duck session.

Rep. Emanuel "Chris" Welch, D-Hillside, says he is a longtime supporter of women's issues because they are "fundamental." He co-sponsored the Reproductive Health Act, which he spoke in favor of at a rally on May 27 in Springfield.