The legislation is made up of several provisions that touch all facets of the criminal justice system. The Pretrial Fairness Act, a longtime passion project to end cash bail in Illinois by Sen. Robert Peters, D-Chicago, and a complete overhaul of police certification crafted by Illinois Attorney General Kwame Raoul were both absorbed into the omnibus package.

The legislation, an initiative of the Illinois Legislative Black Caucus, was tied to a new amendment to House Bill 3653, introduced in the early-morning hours Wednesday following mostly private negotiations that stripped down many controversial provisions in the bill.

“Abraham Lincoln once said ‘Plant your feet in the right place and stand firm.’ We are standing firm,” Sen. Elgie Sims, a Chicago Democrat who sponsored the bill, said in his closing speech before voting began. “We are fundamentally changing the way we do criminal justice in this state.”

Many of the most debated aspects, such as ending qualified immunity for law enforcement, were reduced or removed from the bill following heavy opposition from law enforcement, labor unions, prosecutors and municipal representatives.

Points of contention were highlighted over three days of subject matter hearings in the House, where Rep. Justin Slaughter, D-Chicago, also a sponsor of the bill and chairperson of the Judiciary Criminal Committee, fielded testimony and criticism from Republicans on the committee and representatives from the Illinois Association of Chiefs and Police and the Illinois Sheriffs’ Association.

Still, the scaled down version that made it to the Senate floor was attacked by Republican lawmakers who said its changes were too drastic and would negatively impact the safety of Illinois communities. Some Democratic senators joined Republicans in voting against the bill or didn’t vote at all.

“It is bold, it is transformational, it is supposed to be,” Sims said in response to challenges during Senate debate.

“The people of Illinois sent us here. They sent us here to do better by them, not by ourselves. This bill is not about who we are, it’s about the Illinois we strive to be.”

Effective Jan. 1, 2023, all bail bonds and conditions of bail will be replaced by a system of pretrial release to be developed by the Illinois courts based on a detainee’s alleged crime, their risk of not appearing for their court date, and the threat or danger they may pose to the community if released.

“For too long, people in this state have spent time in jail only because they could not afford to pay their bail,” Peters said in a statement released shortly after the successful Senate vote. “The end of that practice is near. I’m thrilled that ending cash bail was part of the package we passed today.”

The original version of the bill abolished cash bail effective immediately, but that was extended by two years to accommodate the transition and allow for uniform standards to be developed, according to Sims.

According to the bill, the General Assembly intends to establish statewide use-of-force standards by 2022 while making changes to what are acceptable and unacceptable uses of force in Illinois statute.

The bill provides that use of force is permissible only when an officer has determined it is necessary to defend either themselves or others from bodily harm when making an arrest. When a suspect is attempting to escape, officers would not be permitted to use deadly force to stop them, unless that person cannot be apprehended at a later date and is likely to harm others.

The law prohibits certain uses of force. Chokeholds and restraints above the shoulders that can restrict breathing are banned, unless explicitly used as deadly force. It also prohibits using force as a punishment or in retaliation when it is not authorized; using nonlethal projectiles like tasers and rubber bullets on someone’s head, groin area or back; firing rubber or any type of round into a crowd; and using tear gas and pepper spray without first allowing a crowd to disperse after being warned.

Officers are also restricted from using deadly force against a person who poses a danger to themselves but does not pose an imminent threat to the officer or another person.

The police reform provisions also add two new duties to the Illinois statutes that officers must follow. The first requires law enforcement to give immediate medical assistance to an injured person, regardless of whether they were injured by the officer’s use of force. The second is the duty to intervene when another officer uses excessive force and to file a report of that incident within five days.

One of the largest changes to the bill was the gutting of a provision that would have ended qualified immunity for officers, eliminating their protection from liability in civil suits if they violated rights guaranteed in the Illinois Constitution.

Instead, the legislation creates a yearlong Task Force on Constitutional Rights and Remedies, an 18-member body that will investigate and develop procedures to protect constitutional rights and remedies should those rights be violated. The task force will specifically look at qualified immunity as applied to law enforcement.

A report with policy recommendations must be submitted to the governor’s office and the General Assembly by May, with the task force being dissolved by the legislation at the start of the new year.

A police certification provision backed by the attorney general’s office was also added to the bill. It gives the state more power over who can be a member of law enforcement and makes it easier to decertify and terminate the employment of problematic officers.

Before this legislation, the Illinois Law Enforcement Training and Standards Board could decertify an officer only if they were convicted of a felony or a limited set of misdemeanors such as offering a bribe, prostitution or criminal sex abuse.

The criminal justice omnibus bill grants ILETSB greater discretion to decertify officers based on whether a Certification Review Board determines they violated conduct guidelines.

An officer could be decertified if it is determined they committed a felony or a disqualifying misdemeanor, even if they were never convicted or charged. Other actions that could result in an officer being decertified include using excessive force; failing to intervene when another officer uses excessive force; tampering with dashboard cameras, body cameras or evidence; and committing perjury or engaging in “unprofessional conduct” such as deceiving or harming the public.

Under a new statute of Law Enforcement Compliance Verification, all officers must verify their certification with ILETSB every three years to prove they’ve completed all mandatory trainings and have not engaged in misconduct worthy of decertification.

No law enforcement agency can hire a person who is not ILETSB certified.

Under this new legislation, the Law Enforcement Officer-Worn Body Camera Act is amended so that all law enforcement agencies must eventually use body cameras.

Originally, this provision was touted as the “defund the police” bill by law enforcement groups opposing the Black Caucus legislation due to a noncompliance penalty that reduced how much state funding municipalities received for each year law enforcement agencies under their control violated the mandate.

Now, compliance is rewarded and the penalty has been removed, with ILETSB giving preference in grant funding to agencies following the mandate.

The bill expands rights of people who are taken into custody by police. The state’s 1963 Code of Criminal Procedure is amended and modernized regarding phone calls.

Suspects in custody must be able to make three phone calls within three hours of being taken into police custody. Every time they are detained in a new location, this right is renewed for the purpose of speaking to their attorney and notifying family and friends of their situation.

The new provision also gives detainees the right to access the contact list on their cellphone to obtain numbers as part of their three phone calls, even if the cellphone is being used as evidence in a criminal investigation. This must be done before the phone is officially placed into police inventory.

Other provisions give judges more discretion to disregard mandatory minimums for certain crimes, change how prisoners are counted when drawing representative district maps and create a new process for how deaths in custody are handled.

Rep. Emanuel "Chris" Welch, D-Hillside, will be the next speaker of the Illinois House of Representatives, ending Mike Madigan's long tenure in the leadership position. 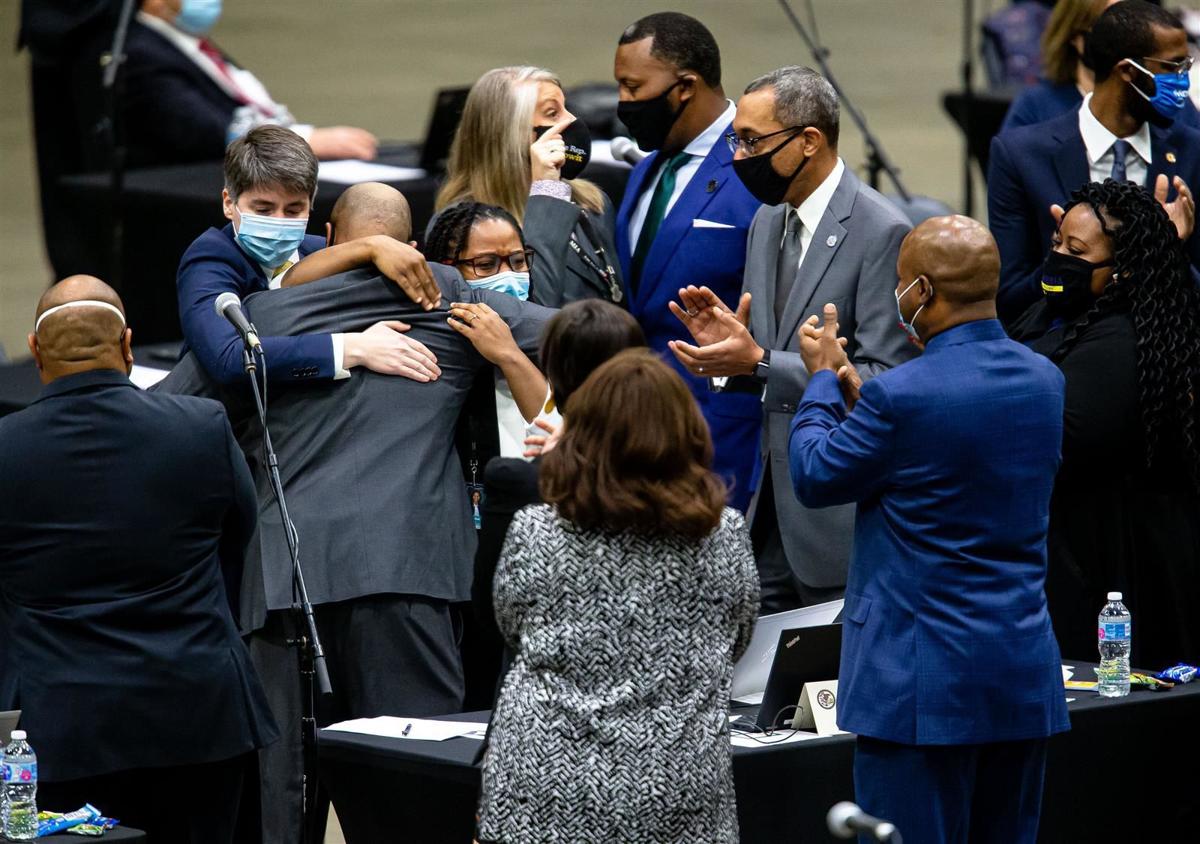 Rep. Justin Slaughter, D-Chicago, is swarmed after the criminal justice reform bill passes the Illinois House during the lame-duck session for the Illinois House of Representatives on Wednesday morning at the Bank of Springfield Center. 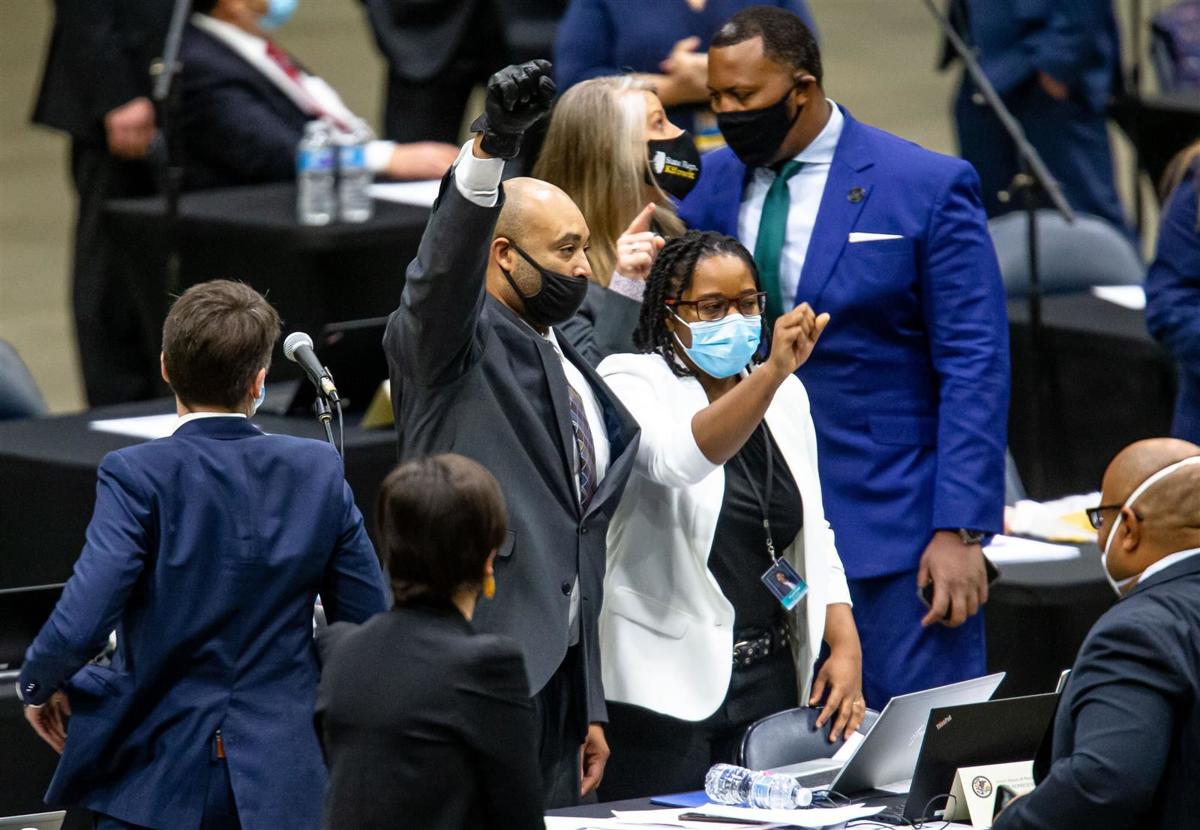 Rep. Justin Slaughter, D-Chicago, holds up his fist while wearing a black glove after the criminal justice reform bill passes the Illinois House during the lame-duck session of the Illinois House of Representatives held Wednesday morning at the Bank of Springfield Center.