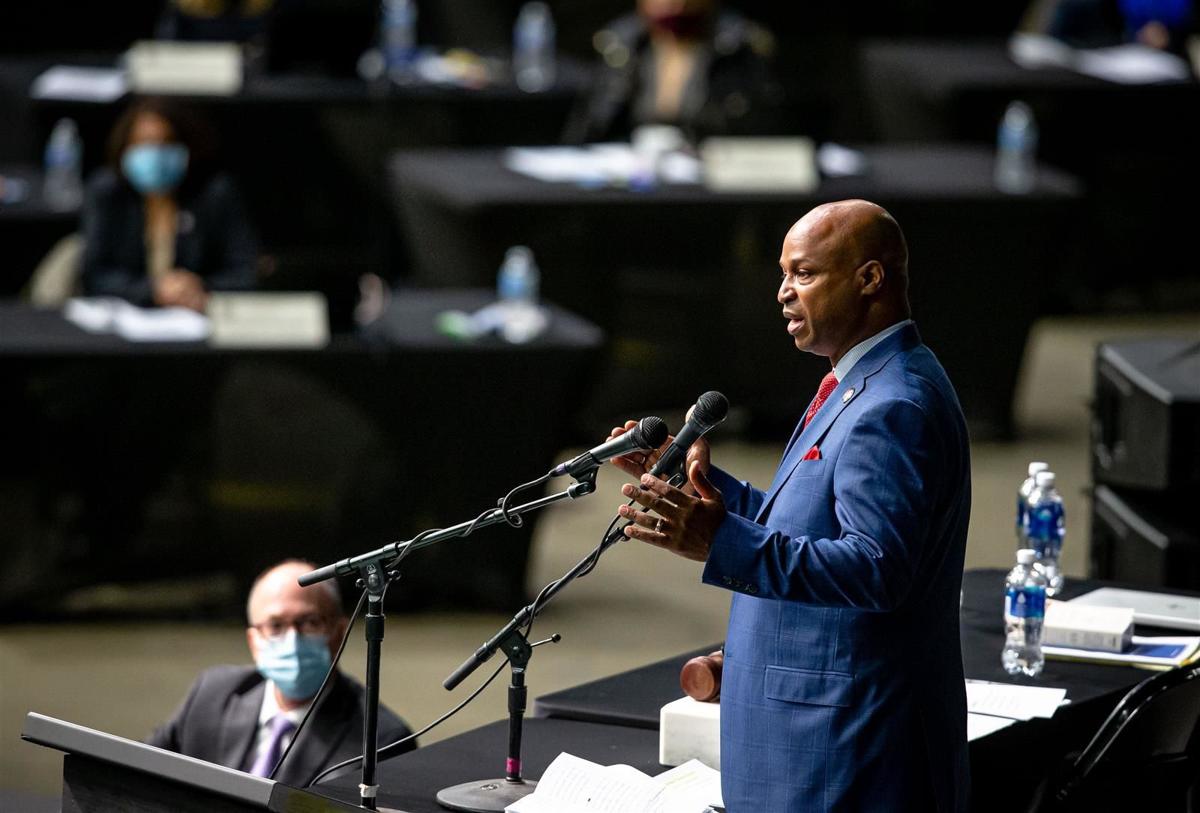 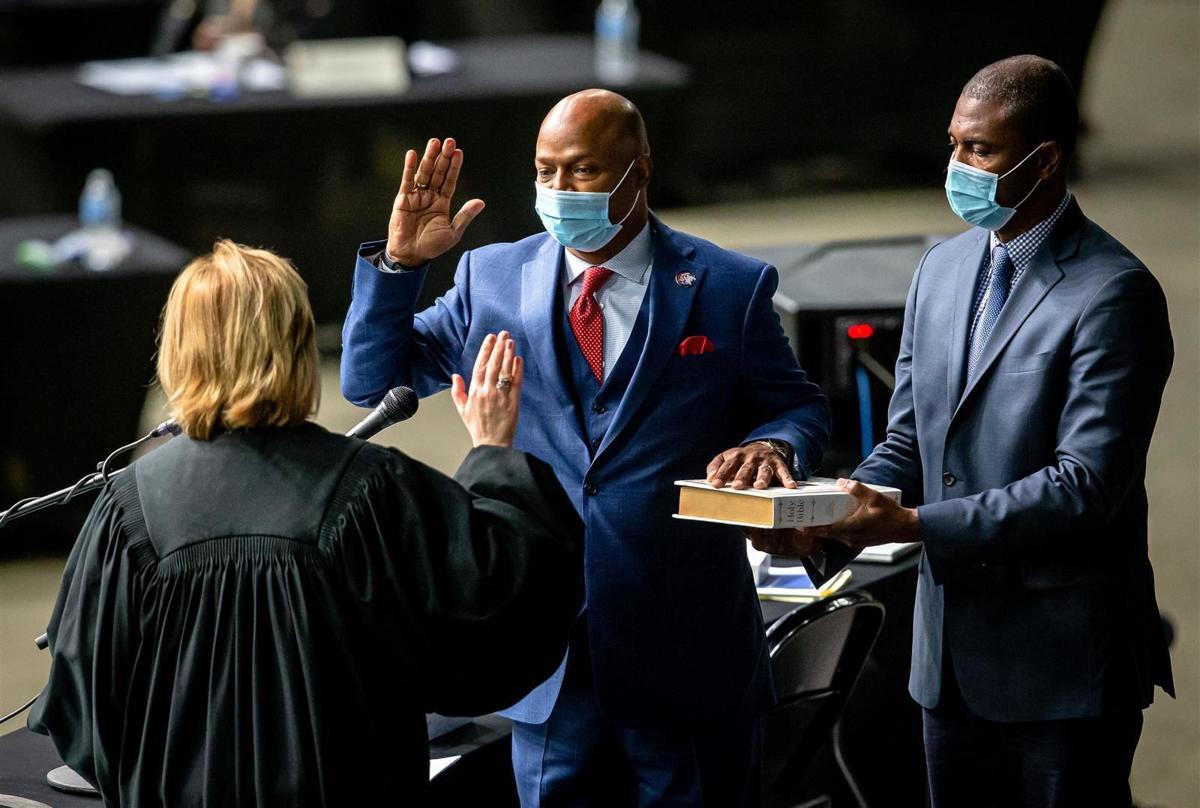 Rep. Emanuel “Chris” Welch is sworn in as Illinois speaker of the House on Wednesday. He replaces Michael Madigan, the longest-serving legislative leader in modern U.S. history. 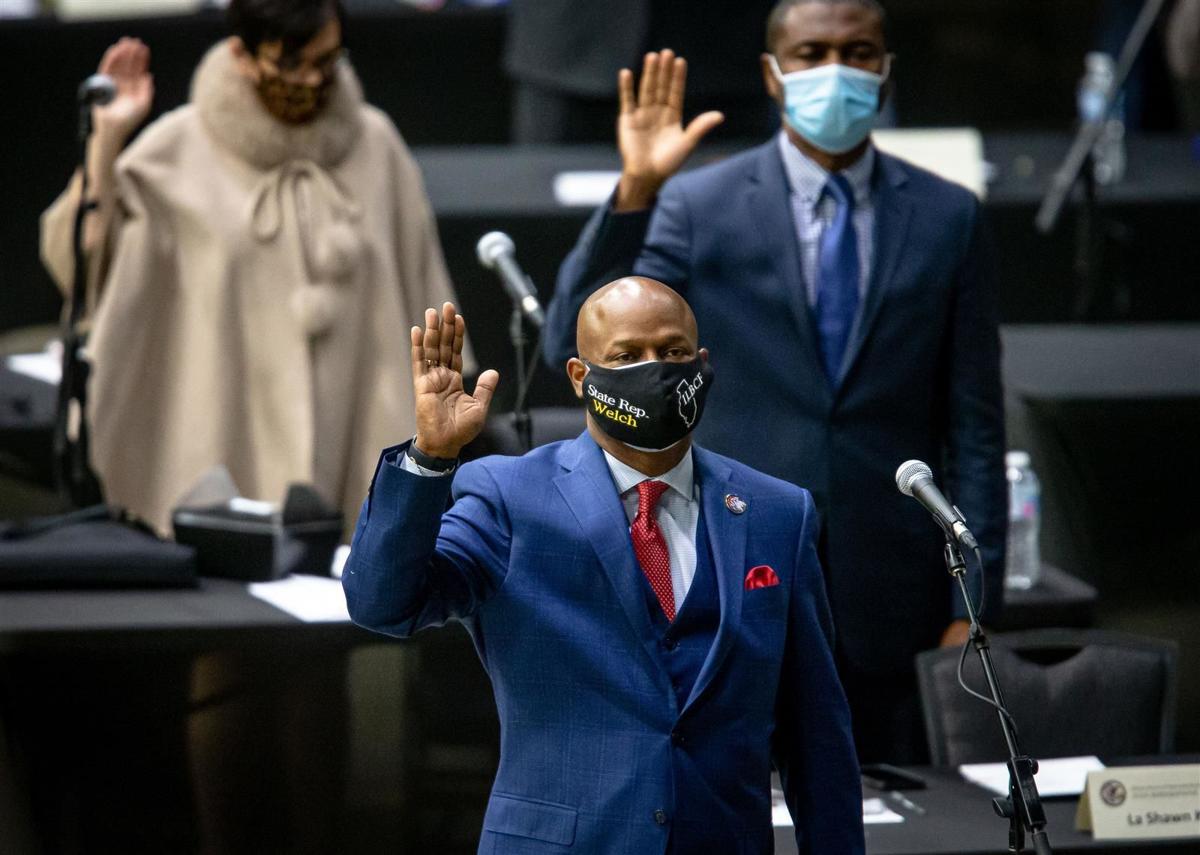 The House came into session Wednesday afternoon to begin the 102nd General Assembly just moments after it adjourned a rare lame duck session that ended the 101st biennial session.

Speaking on the floor of the Bank of Springfield Center – where the House has been meeting to allow for social distancing due to the COVID-19 pandemic – the Hillside Democrat issued a call for unity, vowing that he would no longer refer to other House members as “Democrats” or “Republicans.”

“Today will be the last time I talk about us as Democrats or Republicans because I want to talk about us being united,” Welch said in his inaugural speech. “We’re going to work together to move this state forward.”

Gov. J.B. Pritzker in a statement said: “Speaker Welch has a record of championing legislation that has improved the lives of hard working Illinoisans, and I have enjoyed working with him to move our state forward. As Governor, I believe strongly that it is incumbent upon me to work with the General Assembly’s leaders who are chosen by their caucuses, and I look forward to continuing to work with Speaker Welch on our shared agenda.”

Welch was elected speaker by a vote of 70-44 over House Minority Leader Jim Durkin, R-Western Springs. And while Durkin opened his remarks by saying he was “extending an olive branch of cooperation, starting today,” he then launched a verbal polemic against Madigan, who is leaving the speaker’s office amid a cloud of corruption allegations.

“While his reign as speaker is all but over, his decades in power will never be erased,” Durkin said. “What we have here through this unique and rare opportunity is the ability to break from the past, to break that business model, because they are as apparent as the masks on our face.”

Last summer, Durkin initiated the petition that forced the House to form a special investigating committee to probe Madigan’s role in a bribery scheme involving utility giant Commonwealth Edison and determine whether disciplinary actions should commence.

But it was Welch who chaired that committee and made sure it did not recommend disciplinary action.

Madigan, who on Monday announced he was suspending his bid to remain speaker, issued a statement Wednesday congratulating Welch as "speaker-elect" minutes before lawmakers were set to make the vote official.

“As I prepare to pass the speaker’s gavel to a new generation of Democratic leadership, I want to thank the people of my district and the members of the House Democratic Caucus for the faith and trust they have placed in me over the years," Madigan said in the statement. "I want to thank my staff for their hard work on behalf of every member of this caucus. It has been the honor of a lifetime to help bring people of different experiences and backgrounds together to serve our state.

It was an honor to preside over the inauguration of the 102nd Illinois House of Representatives and the historic election of @RepChrisWelch as the new House Speaker. Speaker Welch will serve as the first African American in that important post. Congratulations, Chris. pic.twitter.com/bRAIvYbuyE

Madigan had been speaker 36 of the past 38 years,  but a vote Sunday by members of the Democratic caucus signaled he lacked enough support to keep the gavel. He suspended his speaker campaign the next day.

Last summer, Madigan was identified in a Justice Department investigation as the beneficiary of a yearslong bribery venture involving ComEd. It has thus far yielded a $200 million fine on the utility giant, a ComEd executive’s guilty plea and indictments of four others, including Madigan’s closest confidante. Madigan has not been charged with a crime and has denied wrongdoing.

ELECTED: State representative for the 7th District since 2013; previously served 12 years on Proviso Township High School Board of Education.

FAMILY: Married to ShawnTe and has two children, Tyler and Marley.

Welch has been part of Madigan's inner circle, serving as chairman of the powerful Executive Committee and was chosen last fall to be chairman of an investigative committee demanded by Republicans to review Madigan's involvement in the ComEd scandal. Welch abruptly brought the probe to a close, claiming that the Republicans had created a political show.

The 78-year-old Madigan has long been perceived as the most powerful politician in Illinois. Former Republican Gov. Bruce Rauner, who tried to bring Madigan down, famously claimed that it was Madigan, not he, who was in charge.

Said Attorney General Kwame Raoul: “Members of the Illinois House of Representatives have passed the baton to a new generation of leadership, and I look forward to our work together to enact policies and reforms that protect and benefit all Illinois residents.”

The Associated Press contributed this report.

House Speaker Michael Madigan suspends speaker campaign: ‘This is not a withdrawal’

"The House Democratic Caucus can work to find someone, other than me, to get 60 votes for Speaker," Michael Madigan said Monday.

Rep. Darren Baily of Xenia was seen laying on the floor of the Bank of Springfield Center, where the House is meeting to maintain social distancing during the COVID-19 pandemic. Bailey was seen getting onto a gurney under his own power and gave a thumbs up while being wheeled out.

With less than three days to shore up the votes needed to claim another term as House speaker, Michael Madigan on Sunday found that he lacks support from nearly a third of his 73-member Democratic caucus.

The Illinois General Assembly on Wednesday approved a sweeping overhaul of the state’s criminal justice system that would end cash bail and eventually require every police officer in the state to be equipped with a body camera.

A bill aimed at making college education and teacher preparation programs more accessible and affordable for people of color began working its way through the General Assembly on Saturday.

Newly sworn-in Congresswoman Mary Miller apologized Friday morning for statements she made earlier in the week citing Adolf Hitler, three days after she decided to quote the figure who led the murder of 6 million Jews and 11 million others.

Illinois Gov. J.B. Pritzker thrust the state’s finances into the spotlight on Friday with a proposal his office says would prevent the state from losing $500 million in tax revenue from businesses.

A growing number of Democrats called Thursday for the resignation of U.S. Rep. Mary Miller of Illinois, a newly sworn-in Republican who quoted Adolf Hitler at a rally outside the U.S. Capitol this week.

Rep. Emanuel “Chris” Welch is sworn in as Illinois speaker of the House on Wednesday. He replaces Michael Madigan, the longest-serving legislative leader in modern U.S. history.