SPRINGFIELD — Throughout the past year, U.S. Rep. Rodney Davis, R-Taylorville, made clear his preference to continue serving Central Illinois in Washington — if only Springfield Democrats controlling the once-a-decade redistricting process would let him.

In a body where seniority matters, Davis has spent a decade climbing the ranks and is primed to become one of the most influential Republicans in the House if he sticks around.

Davis, who had teased a run for governor of Illinois as an alternative should his path back to Washington be imperiled by redistricting, appears he will get his first choice.

My family and I are excited to announce that I am running for re-election to Congress in the new #IL15, which includes where we live in Taylorville and where I'm the only incumbent.https://t.co/Tya6fu3fd3

The Taylorville Republican announced Tuesday that he will run for reelection in the newly-drawn 15th Congressional District, a decision that would likely ensure his return to the U.S. House barring a primary loss.

“Republicans are primed to retake the House next year, and I’m ready to work with a new Republican majority to finally fire Nancy Pelosi and hold the Biden Administration accountable for their massive failures," Davis said. "I look forward to campaigning hard and earning every vote in this district over the next year.”

Davis, 51, was first elected to Congress in 2012, representing a Central Illinois swing district that includes Bloomington, Champaign, Decatur and Springfield. He was often the target of Democrats, who poured millions into unsuccessful campaigns — some close, some not — trying to take his seat.

This time around, Davis’ political fate was not in his own hands.

But instead of pushing Davis towards a run for statewide office by complicating his return to Congress, Democrats drew him a safe conservative district that stretches from Iowa to Indiana, picking up outlying areas of Springfield and Decatur and several mid-size towns like Charleston, Jacksonville, Lincoln, and Quincy. If he can win a Republican primary, his reelection would be all but assured.

"While the boundaries are new, Rodney knows this area well," Shimkus said. "He is a trusted and respected leader on rebuilding our roads and bridges, on farming and the needs of small businesses, and advocating for working families. Rodney knows us, and we know him.”

The district includes much of Macon County, including portions of Decatur's far west side and all areas south of Lake Decatur. It also far northern reaches of the county, including Argenta and Maroa, with the more urban 13th Congressional District cutting through the middle of the county.

Davis currently represents the 13th. And though it will still include portions of Champaign, Decatur and Springfield, legislative Democrats cut several rural precincts while adding more Democratic leaning areas in the Metro East region. Davis' home was also drawn out of the district.

Before that, Davis had spent much of the summer wading into state politics and upping his direct criticisms of Pritzker, seemingly sending a message to Democrats of what might come if the map did not work in his favor.

But Davis always made clear that his first preference was to remain in Congress, where the five-term lawmaker will be in line to chair the House Administration Committee in 2023 and the powerful House Transportation and Infrastructure Committee a few years later if Republicans take the majority.

Davis is the only member of Congress who lives in the district, but he could still face a primary challenge from state Rep. Mary Miller, R-Oakland.

Miller, a freshman firebrand and one of former President Donald Trump's most fervent supporters, was drawn into the Southern Illinois-based 12th Congressional District with Bost, who has announced reelection plans.

Miller, however, lives close to the 15th district, which contains portions of her current district. She has not yet announced future plans.

Kent Redfield, a retired professor of political science at the University of Illinois Springfield, said Miller "really only has two choices" if she wants to remain in Congress: challenge either Bost or Davis. Neither would be easy.

"Each of them present the issue that she's running against a more established incumbent with a lot of organizational support and name recognition," Redfield said. "So she's at a real disadvantage."

Redfield characterized Davis' campaign announcement, which included a long list of endorsements, as "textbook in terms of how he rolled that out."

But in terms of state politics, Davis passing on the governor's race leaves Republicans without a potential standard bearer that can unite both the party's base and donors.

It's widely acknowledged that the party's nominee will have to raise significant sums of cash to compete with Pritzker, a billionaire who dropped more than $170 million in his 2018 campaign.

Though Sullivan has raised nearly $11 million from a handful of wealthy out-of-state donors, the state's wealthiest man, Ken Griffin, a major GOP donor, has yet to back a candidate.

Rodney Davis at CIRA I 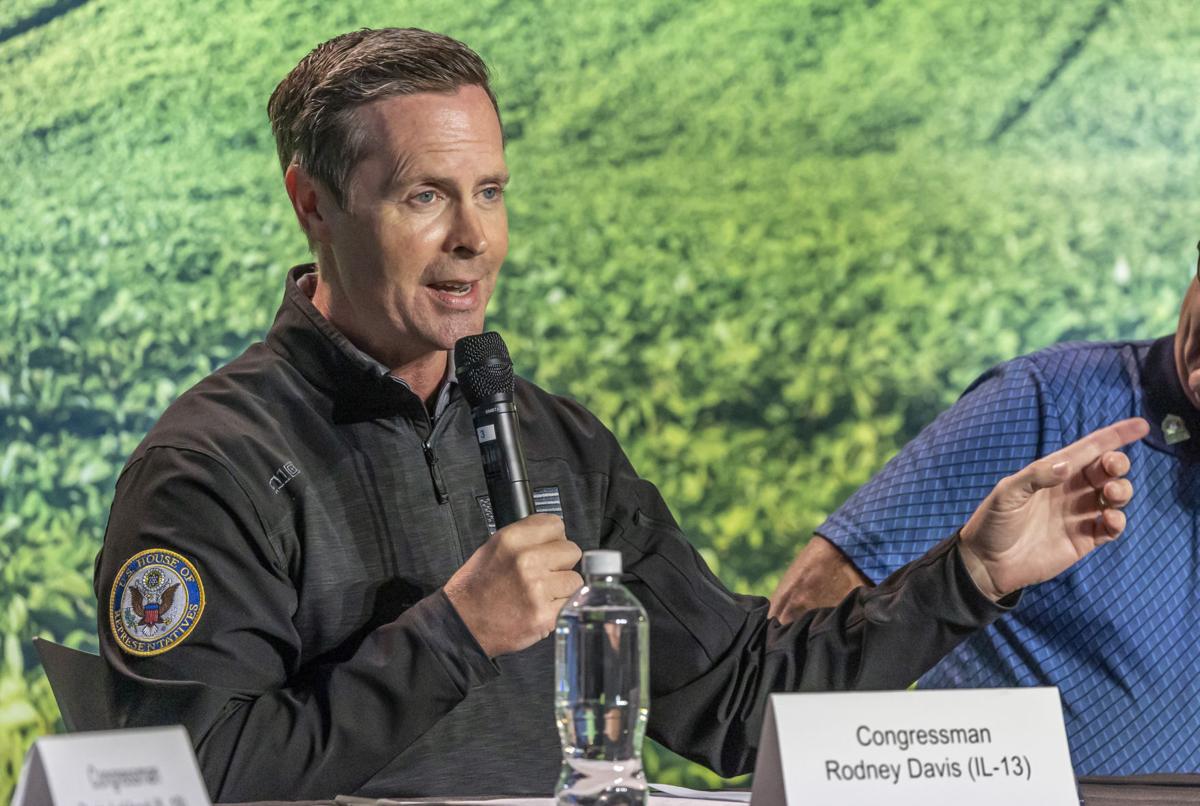 U.S. Rep. Rodney Davis, R-Taylorville, speaks to those gathered Sept. 1 for the Biofuels Policy Summit at the Farm Progress Show in Decatur. 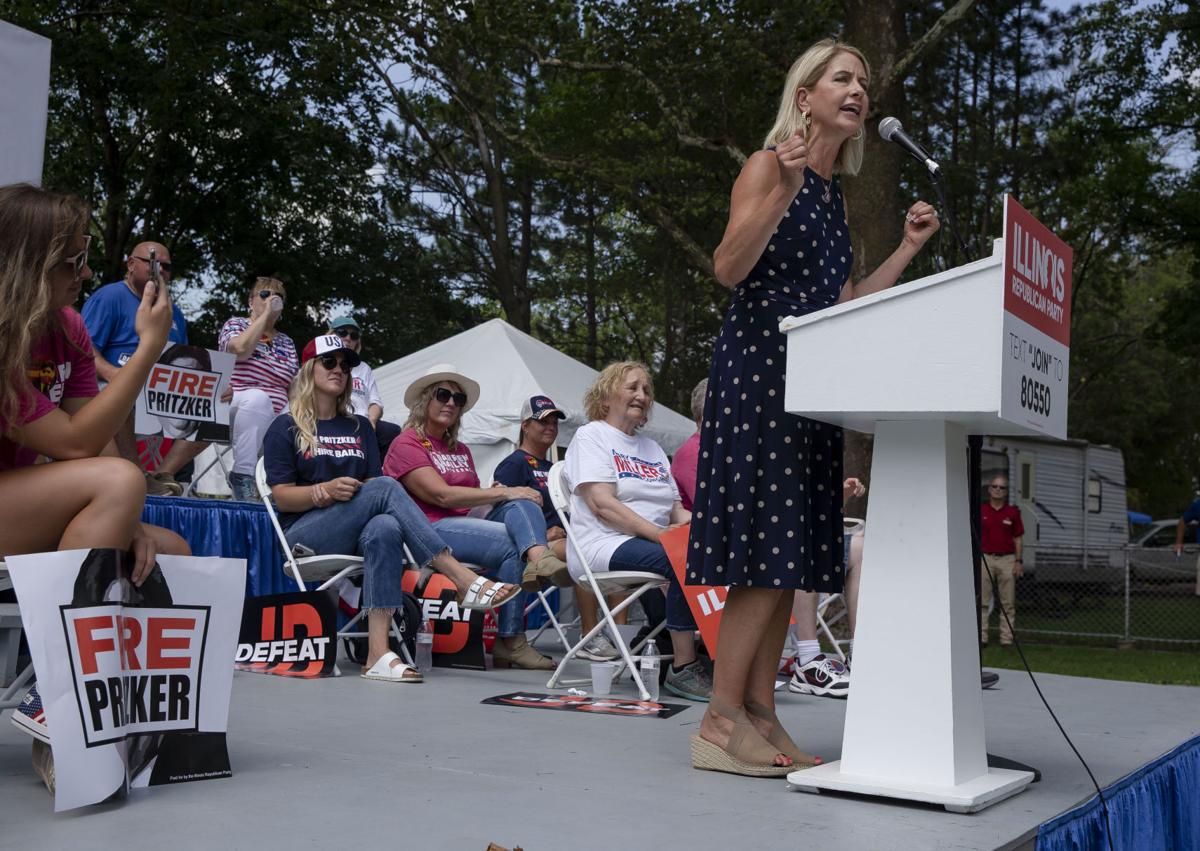