SPRINGFIELD — The number of COVID-19-related deaths and the single-day test positivity rate spiked Tuesday as the Illinois Department of Public Health announced an abnormally small number of test results over the previous 24 hours.

The health department reported 39 deaths related to the virus, the highest single-day total since June 26. The rolling seven-day average positivity rate increased to 4.3% as the state reported 1,492 new confirmed cases among 22,961 test results reported in the previous 24 hours.

The testing output was the lowest reported in one day since July 6. Because of the low testing output, the single-day virus positivity rate was 6.5%, which is the highest one-day rate since June 2.

In response to questions regarding the low testing output, an IDPH spokesperson said only, “We reached the maximum capacity of our system and currently are in the process of expanding this. That work is underway now.”

“Reporting test results is working, but it is currently slow and backlogged due to the large volume of testing data that we have processed since the beginning of the pandemic,” the spokesperson said in a follow-up response to Shaw Media, adding the department is working to “eliminate the testing data backlog."

The spokesperson added the delay in data reporting “does not delay a person getting their test results.”

The 39 deaths reported Tuesday drove the total to 8,064 among 236,515 confirmed cases since the pandemic first reached Illinois.

Meanwhile, Region 4, which includes the Metro East area on the Missouri border, saw its positivity rate decline from 10.4% to 9.6% as of Saturday, according to the IDPH website. That was not a big enough decrease to offset further mitigation measures from the state.

The governor’s office on Tuesday afternoon announced further mitigations that will take effect in the region Wednesday. They include closure of bars and restaurants for indoor drinking and eating and limiting social gatherings to the lesser of 25 guests or 25% of overall room capacity.

In Region 7, which includes Will and Kankakee Counties, the positivity rate remained at 8.8% for the second straight day Saturday, which was four days after new mitigations took effect.

Those mitigations, effective since Wednesday, Aug. 26, include closure of restaurants and bars for indoor consumption.

Hospitalization numbers remain slightly above their pandemic lows as well. At the end of Monday, 1,513 people in Illinois were reported hospitalized with COVID-19. Of those, 362 were in an intensive care unit and 146 were on ventilators.

On Wednesday, residents in the Metro East area will be unable to consume food or alcohol inside a restaurant or bar. Such establishments must close at 11 p.m., and residents are prohibited from congregating indoors for any reason. 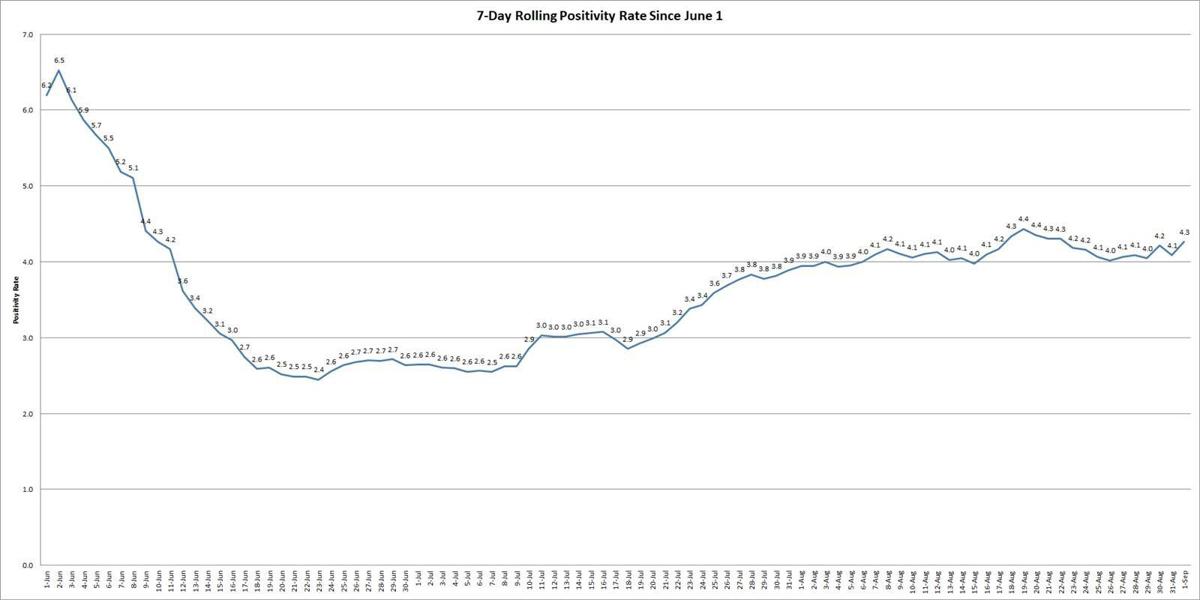 This graph shows the rolling 7-day positivity rate for tests completed starting on June 1. Illinois Department of Public Health data was used to calculate the averages.

This graph depicts the COVID-19 positivity rate of test results reported over a 24-hour period as reported by the Illinois Department of Public Health.