CHICAGO - When Chuck Ingwersen took Pfizer’s newly authorized COVID-19 medication after he contracted the virus, he steadily improved each day.

“It was like a straight line of feeling better every day,” he said.

For Ingwersen, though, actually finding the medication was more difficult than his relatively painless recovery.

Pfizer’s drug, called Paxlovid, received emergency use authorization by the Food and Drug Administration in December. The FDA has also authorized a second medication, Merck’s molnupiravir, though trials found it to be less effective.

The medication is a godsend for immunocompromised people like Ingwersen for whom the COVID-19 vaccine does not work well.

But the new pills remain scarce while Pfizer works to ramp up production. Federal health officials have mandated use for those who are most likely to become seriously ill from COVID-19. Everyone else should rely on the widely available vaccines, health experts say.

For those who need it, though, Illinois is beginning to get regular shipments to local pharmacies and some designated health centers. Doctors can then prescribe the pill for certain patients who test positive for the virus.

“We are hopeful the supply will increase, but these drugs are available, and seem to be effective in keeping people out of the hospital,” said Dr. Robert Citronberg, executive medical director of infectious disease and prevention at Advocate Aurora Health during a press briefing.

In clinical trials, Paxlovid reduced hospitalization and death by about 88% compared with a placebo, according to the Centers for Disease Control and Prevention. Merck’s drug molnupiravir reduced it by about 30%.

Pfizer’s drug regimen involves taking the medication orally twice a day for five days and is preferred because of its greater success rate, but Merck’s pill is useful if Paxlovid is not available, doctors said. The medication is free for patients.

“These are actually really exciting times in therapeutics,” Citronberg said.

Doctors have mostly been treating high-risk cases of COVID-19 with monoclonal antibody treatments, but two out of the three treatments may not work as well against the omicron variant, medical experts said.

The Pfizer pill, though, is shown to work against the newest variant.

“It is an exciting development,” said Dr. Amish Desai, senior medical director at Oak Street Health in its South Side clinics.

The pill, authorized for patients 12 years and older who weigh at least 88 pounds, must be taken within the first five days of feeling symptoms to be effective, according to the CDC. The treatment is not meant for people already hospitalized with severe symptoms.

The agency also notes that it can have some severe interactions with other drugs.

Medical experts are quick to caution that the vaccine is still the best way for most people to protect themselves.

“We don’t want there to be this idea that people are covered,” Desai said. “Even with this medicine being a game changer, it’s important to still be vaccinated.”

Where to find the pills?

In Illinois, there are 88 health centers and pharmacies that carry Paxlovid, 29 of which are in Chicago, according to a federal government database. Merck’s drug can be found at 100 sites in Illinois, with 31 in Chicago. Most sites show having about 20 to 60 courses on hand, though some report up to 100.

Members of the public can find out which providers carry it by viewing the “Public therapeutic locator” at HealthData.gov.

That’s how Ingwersen found a supply of Paxlovid.

After years of frequently becoming sick, Ingwersen, 64, of Oak Forest, got blood work and learned he did not have a functioning immune system. When the pandemic hit two years ago, his doctors told him he was at high risk of serious illness. He got the vaccine and booster, but does not develop many antibodies.

So when he came down with COVID-19 in early January, he was worried. His immunologist recommended a monoclonal antibody treatment, which requires an infusion at a hospital. But Ingwersen asked for the Pfizer pills.

As the pills had only been authorized a couple of weeks before, his immunologist told him they didn’t show up in her computer system. So he researched it and found the HealthData.gov site.

Ingwersen began calling pharmacies listed in the database, and found the drug at a suburban Walgreens on his second call. His doctor then wrote a prescription.

“She made the call right away and within hours of testing positive, I had Pfizer antiviral pills,” he said. “We were all very surprised.”

‘A tool we have in our limited toolbox’

Doctors are using the HealthData.gov site as well.

“We saw these pharmacies showing a supply, gave them a ring right away and wrote a prescription,” Desai said.

It’s still in low supply, though, and doctors must make decisions on whom to prescribe it for, even within the federal guidelines.

“So many people have all of these underlying health factors,” said Linda Simon-Price, interim chief medical officer at Esperanza Health Centers. “It’s a difficult process to decide who can get the medication.”

Esperanza was chosen to receive shipments of Paxlovid and molnupiravir and got its first batches earlier this week, with 40 patient courses of the Pfizer medication and 20 of the Merck. The health center has developed a tiered system to determine who will get the medication.

Melaney Arnold, spokeswoman for the Illinois Department of Public Health, said the state’s supply of Paxlovid is “very, very limited.” The state also has its own online locator tool to find the medications.

In a news release earlier this month, state officials said Illinois would receive new allocations of the treatments every two weeks. Officials have designated Walgreens and Walmart to receive shipments, among other pharmacies. In a statement, a CVS spokesperson said the pharmacy chain dispenses the drugs in 11 states but not in Illinois.

At Walgreens, supply is “limited and allocation will continue to increase over time as inventory builds.”

“This is a tool we have in our limited toolbox,” Simon-Price said. “This is one tool we have.”

Watch Now: Waterloo Queen of Hearts raffle has a winner of nearly $2M prize after a yearlong wait

On Tuesday night — finally — a victorious cry came from emcee Chad Minier, heralding a winner of the $1.89 million pot, in front of onlookers …

In a 2-1 ruling, the justices said plaintiffs in the case made a plausible argument that the law violates their rights to equal protection und…

This Able Veteran, a Southern Illinois based non-profit organization which trains service dogs for military veterans with PTSD, has named Rebe…

The moment the Chinese spy balloon was shot down, ordered by President Biden

The moment the Chinese spy balloon was shot down, ordered by President Biden 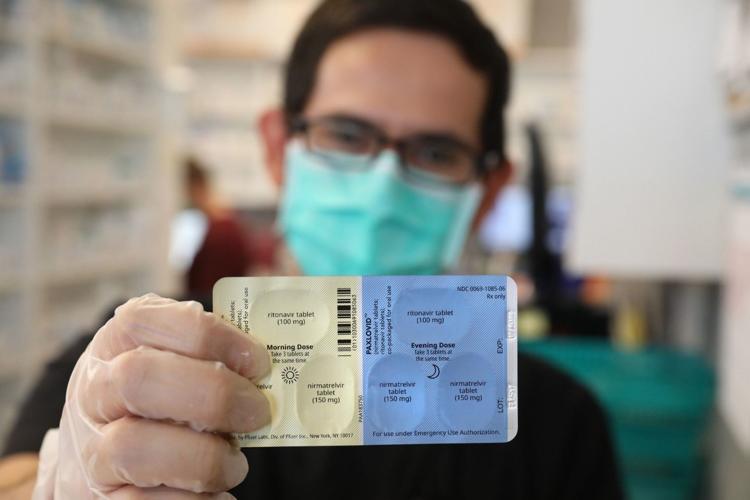 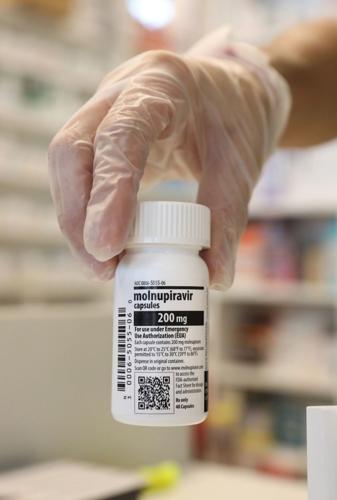 A bottle of Merck's molnupiravir, which is a treatment for COVID-19, is shown at SureCare Pharmacy inside Esperanza Health Center in Chicago on Jan. 13, 2022.