The Illinois Department of Public Health on Thursday reported 1,360 new confirmed cases of the disease and 25 additional virus-related deaths over the previous 24 hours, bringing the statewide total since the pandemic began to 240,003 known cases and 8,115 deaths. The recovery rate for those 42 days removed from a positive diagnosis is 95%, according to IDPH.

The most recent deaths were reported in 14 counties. Ages of the victims ranged from people in their 50s to their 90s.

Laboratories reported processing 40,795 tests over the 24-hour period, which made for a single-day test positivity rate of 3.3%. That helped lower the seven-day rolling average positivity rate by one-tenth of a percentage point to 4.4%. IDPH noted, however, that it is still experiencing delays in processing data for its daily public reports due to the large volume of tests being conducted.

“All available resources are being deployed to improve our data systems throughput and we anticipate improvement in data processing as the week proceeds,” the department said in a news release. “Although the slowdown has delayed the reporting of some additional aggregate numbers, this has not affected the reporting of positive or negative results to individuals in any way.”

As of Wednesday night, 1,620 people in Illinois were hospitalized with COVID-19. Of those, 360 patients were in intensive care units and 144 patients with COVID-19 were on ventilators. All of the numbers remained slightly above their pandemic lows.

Meanwhile, the number of Illinois workers filing first-time unemployment claims fell slightly last week, according to the U.S. Department of Labor. During the week that ended Saturday, Aug. 29, the state saw 24,116 people file initial claims for jobless benefits, down from 26,262 the week before.

The number of people receiving continuing unemployment benefits also fell to 555,582, which is 37,723 fewer than the prior week.

An additional 4,433 workers filed first-time claims for Pandemic Unemployment Assistance, the federally-funded program for gig workers, independent contractors and others who don’t normally qualify for regular unemployment. That was an increase of 264 from the prior week.

There were 118,968 people in Illinois receiving continuing PUA benefits during the week, down 798 from the prior week.

Illinois among last states to apply, be approved for added $300 unemployment benefit

Gov. J.B. Pritzker announced Monday he instructed the Illinois Department of Employment Security to submit an application “despite serious concerns about the unfairness” of the program.

Officials urge residents to fill out census as deadline approaches

Gov. J.B. Pritzker spoke in Berwyn on Thursday to promote the 2020 U.S. Census as the Sept. 30 deadline for states to get their residents counted approaches.

Beginning in October, there will only be one northbound train leaving Carbondale direct for Chicago on four days out of the week.

Southern Illinois University is reporting that 31 people associated with the university are in isolation with COVID-19. 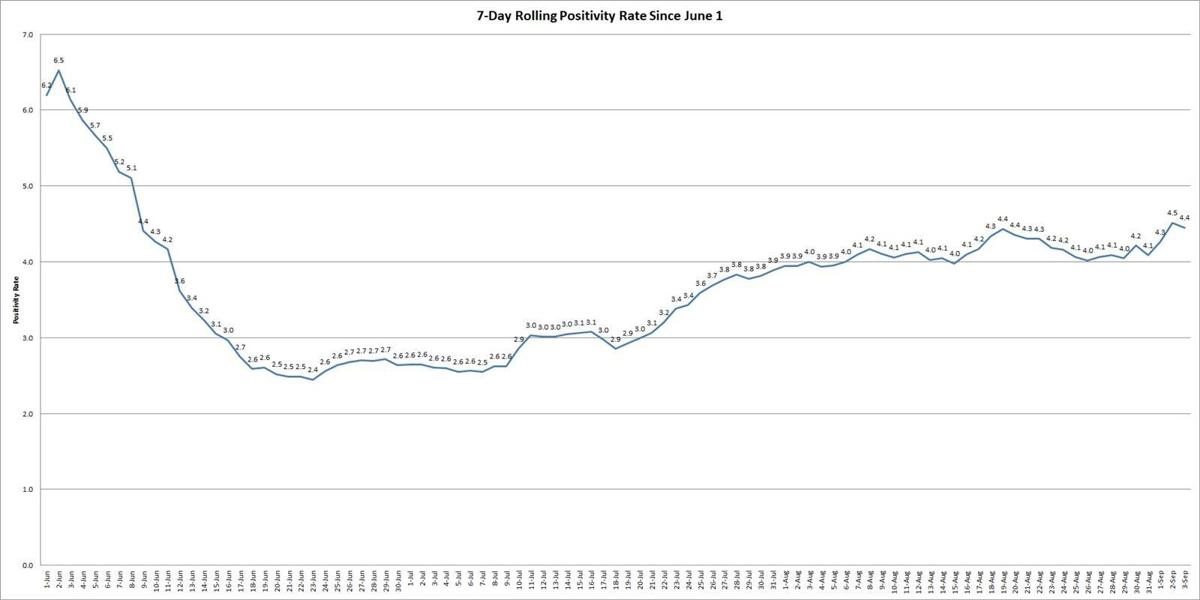 This graph shows the rolling, 7-day positivity rate for tests completed starting on June 1. Illinois Department of Public Health data was used to calculate the averages.

This graph depicts the COVID-19 positivity rate of test results reported over a 24-hour period as reported by the Illinois Department of Public Health.