See where and how fast virus cases are rising in our state and nation, in 8 maps and charts

SPRINGFIELD — As the state’s rolling COVID-19 test positivity rate increased again Wednesday, Gov. J.B. Pritzker and representatives of the University of Illinois announced a testing breakthrough that they said could eventually allow for greater suppression of new cases of the virus.

The state’s flagship public university was granted U.S. Food and Drug Administration approval for rapid saliva-based testing similar to what is being used to test NBA players during their resumed season in Florida.

“Today's announcement is yet another game-changer,” UI President Timothy Killeen said at a news conference in Chicago Wednesday. “The pioneering saliva-based testing developed by our leading edge researchers in Urbana produces rapid results at costs that allow and permit large-scale surveillance testing. That combination is a key to curbing the virus, allowing isolation early enough to limit the spread of the infection.”

The test also identifies those who are not showing symptoms.

The similarity of the UI’s testing method to one used by Yale University allowed it to be approved under the umbrella of an already-approved FDA Emergency Use Authorization. The process is known as a “bridging study” connecting the UI and Yale research. Because the UI’s test was shown to be “non-inferior” to Yale’s, approval was granted.

Dr. Martin Burke, a UI chemistry professor who helped design the test, said the approval “could be repeated in other labs to now allow that same type of transition into using our test under the umbrella of that FDA EUA approval.”

“Direct saliva testing can address bottlenecks of time, cost and supplies,” he said.

The rapid test, combined with contact tracing and other virus mitigation efforts, could help public health officials identify outbreaks before they get out of hand. Killeen said the UI has created an internal unit at the system level “that is working with the governor and his team to share the technology in Illinois.”

“Known as SHIELD Illinois, this will work to expand capacity in hopes of benefiting other universities, K through 12 schools and public and private institutions across the state,” he said.

Officials from UI would not put a timeline on when the tests would be widely available, however, and the governor said it will not be immediate.

“We're not going to be able to get these tests in people's hands in districts before schools open in the next month. It's not going to happen,” Pritzker said. “However, over the next couple of months, there is the possibility that with these bridging studies, with greater approvals, that we'll be able to do much, much more across the state, and the state of Illinois is a partner in that endeavor.”

UI Urbana-Champaign Chancellor Robert Jones said the university tested 10,000 students and staff with the saliva-based test Monday, which was about 1.3% of the national testing output that day.

“That is why we believe that this test is such a breakthrough for our university, but perhaps more importantly for our state, for our nation and for the world,” he said, noting it is also a more affordable method of testing than nasal swabs, which are currently more common.

The test requires the subject to “drool a small amount into a sterile test tube,” according to a news release from the university. Tests yield results in hours, even at high testing volumes, and the UI has performed more than 50,000 tests since making walk-up testing available to faculty, staff and students in July. It expects to conduct about 20,000 tests a day when the fall semester begins next week.

Illinois Department of Public Health Director Dr. Ngozi Ezike said at the news conference that diligence is still needed in social distancing, wearing face coverings and washing hands as Illinois’ COVID-19 metrics continue in the wrong direction. She also urged all Illinoisans to get a flu shot “as early as possible” when they are available and to get regular exercise.

“I've heard people say that the numbers aren't that bad, they're only increasing a little, we're better than other states, we don't really need to be that strict,” she said. “The truth is, we are better than most states, but that's true today, but we are going in the wrong direction.”

For the past four weeks, the U.S. has seen a collective positivity rate decrease, while Illinois’ has increased over that span.

Hospitalization numbers remained slightly above pandemic lows at the end of Tuesday as well, 1,519 people in Illinois were reported to be in the hospital with COVID-19. Of those, 334 patients were in the ICU and 144 patients with COVID-19 were on ventilators.

Pritzker once again stood by a decision not to allow for fall contact sports such as football despite other states’ decisions to let sports proceed.

Illinois reported another 2,257 confirmed cases of the virus Thursday among 62,071 test results reported, making for a one-day positivity rate of 3.6%. That kept the rolling seven-day average rate at 3.5% for the sixth day in a row.

While Illinois’ rolling average COVID-19 positivity rates remain lower than surrounding states, Gov. J.B. Pritzker said once again Wednesday it is still too high to resume a level of normalcy beyond mitigations currently in place.

The seven-day average statewide COVID-19 test positivity rate stayed level at 3.5% Tuesday as the Illinois Department of Public Health reported another 1,531 confirmed cases of the virus.

Illinois Capitol's Douglas statue comes down, but Lincoln had racist views, too

With the nation racing to come to grips with centuries of racial sins, officials plan to remove the Capitol lawn statue of Stephen A. Douglas, whose forceful 19th century politics helped forge modern-day Illinois but who also profited from slavery.

An Illinois lawmaker has tested positive for COVID-19, his office announced Monday.

The U.S. Senate on Wednesday confirmed two new federal judges for the Southern District of Illinois.

The Illinois Supreme Court unanimously ruled Thursday that parents involved in civil unions have the same stepparenting rights as married individuals and that those rights continue even after the death of their spouse. 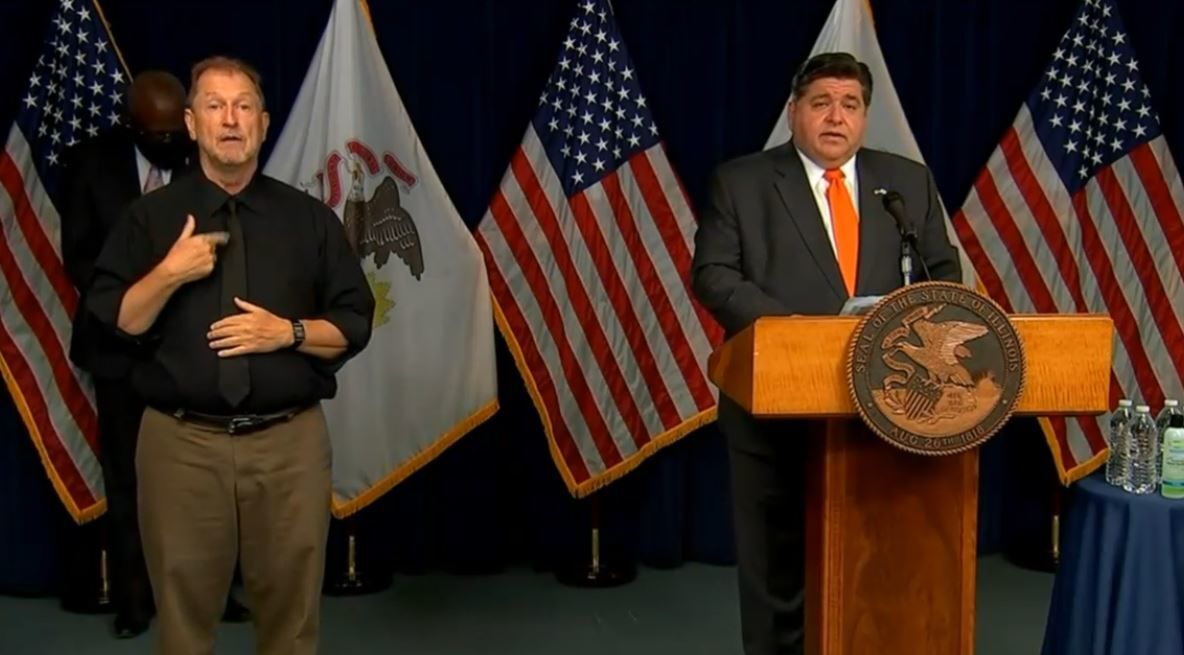 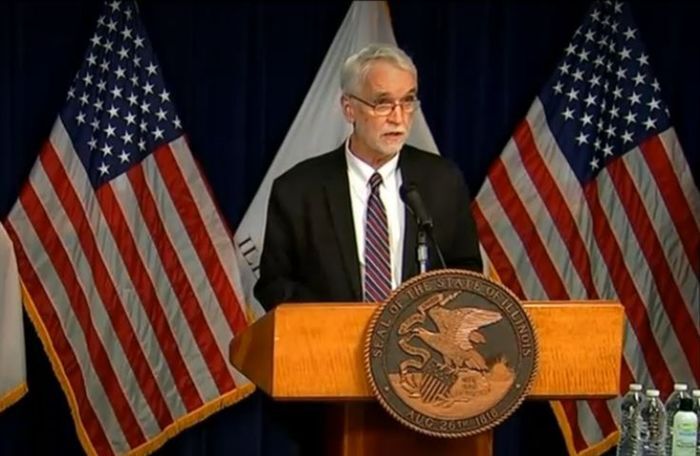 UI President Timothy Killeen addresses the news media at a COVID-19 news conference in Chicago in which the university announced it had been given FDA approval for a faster, cheaper saliva-based COVID-19 test.