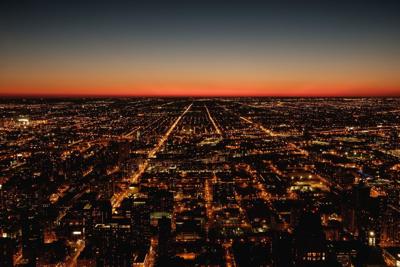 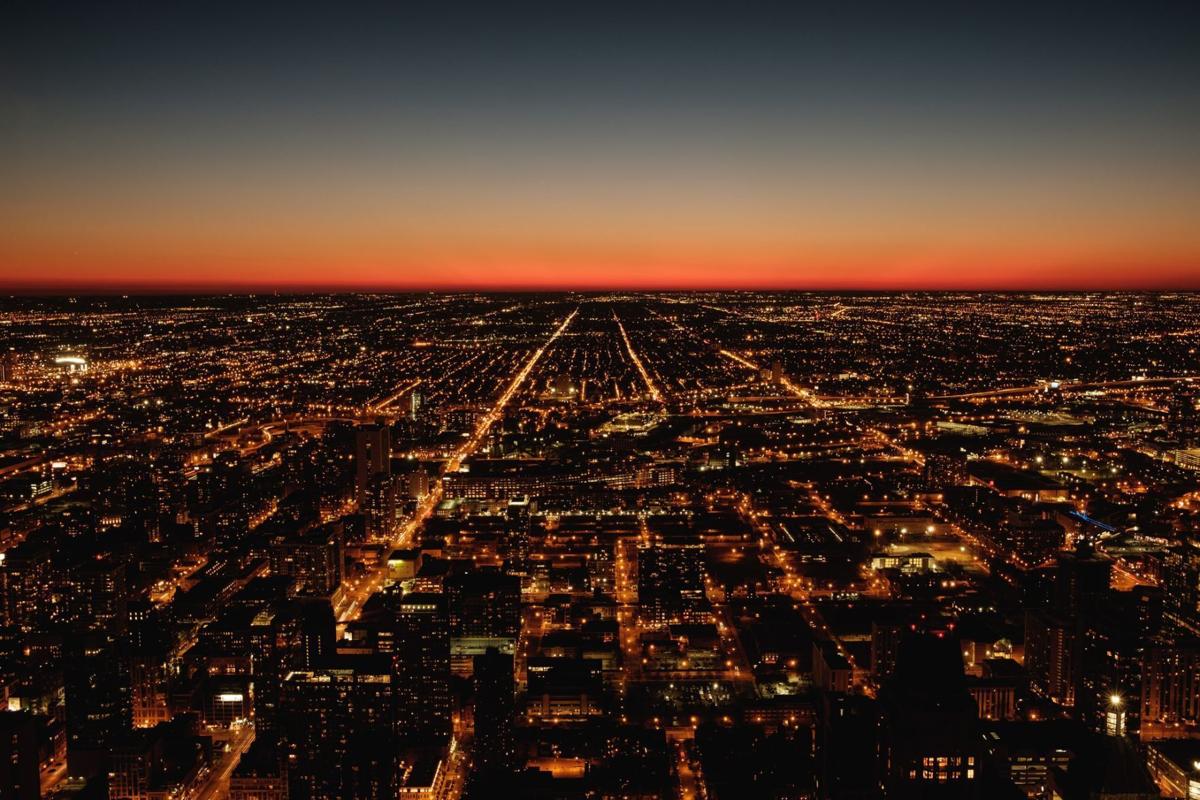 Construction cranes hover over downtown and near the State Capitol on Monday in Austin, Texas. Texas' torrid growth over the past decade is paying off with a major boost in political clout.

It was hardly a surprise when the U.S. Census Bureau announced Monday that Illinois was one of three states to lose population in the last decade.

For years, census estimates and anecdotes from family, friends and neighbors have confirmed a trend of outmigration from the state for one reason or another.

Yet, it was not as bad as it could have been, with the state losing just over 18,000 people compared to the hundreds of thousands feared. And, as expected, the state lost one U.S. Congressional seat. It could have lost two in a worst-case-scenario.

Gov. JB Pritzker, speaking with reporters in Springfield on Tuesday, said that the census totals “exceeded everyone's expectations” by minimizing the state’s losses.

"A full count was done in that census data and that's a very good thing," he said.

The state poured more than $30 million into a public outreach program for the 2020 U.S. Census, the third-highest per capita investment of any state in the country.

The effort bore fruit as the state posted a 71.4% self-response rate, the seventh-highest in the country and the highest of the 10 most populous states. This appears to have helped with stemming the state's losses.

Still, Republicans have blamed the state's population loss and subsequent loss of a seat in Congress on the ruling Democratic Party, which they argue has overseen a poor business climate and culture of corruption that have driven residents to low-tax states.

“It’s unfortunate, yet unsurprising, that Illinois lost population over the past decade. Democrats continue to push corruption, tax hikes, and job-killing policies, which have only made our outmigration problems worse,” said U.S. Rep. Rodney Davis, R-Taylorville, responding to the news Monday.

U.S. Rep. Darin LaHood, R-Peoria, lamented that "many Illinoisans have made their voices heard with their feet and left for other states that are more business and tax friendly."

However, it must be noted that Illinois’ population woes are part of the continuing post-World War II population shift away from the Northeast and Midwest towards the South and West.

Though Illinois was the only Midwest state to lose population, the region as a whole grew at a sluggish 3.1%. The Northeast grew at a 4.1% clip while the South and West grew at 10.2% and 9.1% rates, respectively.

The reality is that Illinois, even when gaining population, has lost at least one Congressional seat every ten years since peaking at 27 seats in the early 1940s.

That likely would have continued this time around, as it did for other states that gained population but also lost a seat in Congress, such as Michigan, New York and Ohio.

Simply put, Illinois probably lost a seat in Congress for reasons mostly outside the state's control.

Here are some other key takeaways from Monday's apportionment announcement:

For the second consecutive redistricting cycle, state legislative Democrats are in control. And if the process goes anything like it did last time, it could be a bad omen for the state's five GOP members of Congress.

During the last remap, Democrats were able to turn an 11-8 GOP-majority Illinois congressional delegation into a 12-6 Democratic majority.

Two incumbents — Reps. Don Manzullo and Adam Kinzinger — were drawn into the same district and three — Reps. Judy Biggert, Bob Dold and Joe Walsh — were drawn into new, Democratic-friendly districts that were essentially unwinnable for a Republican.

Some national redistricting experts predict that, despite losing a seat, Illinois could be the Democrats' "biggest redistricting weapon" with the potential to turn a currently 13-5 Democratic majority delegation into a 14-3 one.

Davis, whom the party has tried vigorously but unsuccessfully to defeat each cycle this past decade, and Kinzinger, viewed as vulnerable within the GOP due to his vote to impeach former President Donald Trump, are widely viewed as the most at risk members this cycle.

Davis, who has teased a run for governor if the new map renders his return to Congress impossible, and other members of the GOP delegation have urged the Democrats to follow an independent process.

However, in a joint statement Monday, Senate Redistricting Committee Chair Sen. Omar Aquino, D-Chicago, and Sen. Elgie Sims, D-Chicago, said they "will not abandon our duty to craft a map by June 30 as required by the Illinois Constitution."

It's full-steam ahead. And that's probably not good news for Republicans.

Census off from estimates

The American Community Survey, which is conducted regularly by the U.S. Census Bureau in between decennial censuses, undercounted Illinois' population by more than 41,000 or 140,000, depending on the dataset used.

This is a problem for Illinois Democrats, who were relying on the data to draw state legislative districts by June 30. That's the last possible date the state legislature can approve and Pritzker can sign a map before a redistricting commission is triggered.

Redistricting data from the current census, which includes counts of population by race, ethnicity and other factors, is not expected until Sept. 30.

In the short term, it strengthens the argument of Republicans to wait until the more accurate data is available.

Long term, it means that Democrats, who appear intent on moving forward with the estimates as their baseline, might have to make adjustments down the line to reflect new information.

Over the years, Illinois has had its share of influential Congressional leaders, from Rep. Dan Rostenkowski, D-Chicago, the longtime chairman of the powerful House Ways and Means Committee, to House Speaker Dennis Hastert, R-Oswego.

But with the loss of another seat, the state's influence wanes a little. To be blunt, size matters.

Larger congressional delegations, say California or New York, often use their collective clout to secure spots on key committees or to influence the outcome of leadership elections.

Though Illinois still has one of the larger delegations in Congress, it's falling closer to the pack. And the state's national influence will take a step back as a result.

Illinois seats in the U.S. House of Representatives

A former financial advisor from Chicago has been sentenced to 13 years in prison for swindling investors out of more than $5 million and using it for plane tickets, luxury hotel stays and other indulgences.

Watch now: Illinois to move into 'bridge phase' of COVID reopening plan on May 14

The LaSalle County coroner theorized the men had either lit the powder for entertainment or, more likely, they were trying to light a fire to cook food that was found nearby.

3 men killed in explosion near Starved Rock were ‘cousins and uncles’ from Chicago area, coroner says

The three people who died Thursday when they ignited a black powder substance that exploded along a bank of the Illinois River next to Starved Rock State Park were men from the Chicago area who were related, the LaSalle County coroner said Saturday.

Enrollment declines at Illinois colleges and universities continue to outpace other states, with community colleges shouldering the brunt of the losses, according to new national and state data.

The former executive director of a North Shore nonprofit aimed at helping disabled children has been charged in federal court with stealing more than $800,000 from the organization and using it to pay down his credit card and on other personal expenses.

The caveat: the state's full reopening will be contingent on keeping the virus at bay

“The tragedy of the death of 13-year old boy has been clouded by the confusion and frustration my office has caused and for this I apologize,” Cook County State’s Attorney Kim Foxx said.

After a year off in 2020, Illinois historic preservationists have announced their list of the state’s most endangered historic places, structures and sites they say are architecturally and culturally significant but at risk of being lost forever.

Construction cranes hover over downtown and near the State Capitol on Monday in Austin, Texas. Texas' torrid growth over the past decade is paying off with a major boost in political clout.