DANVILLE — Jelani Day and his family never hung up the phone without saying “I love you.”

Speaking before a packed auditorium at Danville High School, the memory of the last conversations they shared with the 25-year-old echoed with that common thread of love.

Day’s family, loved ones and the communities who loved him at every stage of his life gathered Saturday afternoon to celebrate the life of the Illinois State University graduate student, two weeks after a LaSalle County coroner identified a body pulled from the Illinois River as his.

His older brother Seve Day remembered Jelani making fun of him, calling him “turtle” and singing the “Franklin” theme song at him. The teasing, he said, helped to build his confidence.

His older sister Dacara Bolden remembered Jelani coming into her house to drink all her juice and eat all the biscuits. She remembered his bear hugs “that would eventually turn into you putting me in a headlock.” And she remembered doing all she could to protect him even when he wanted to be the one to protect her.

His little sister Zena Day said they were like twins, but he still reminded her that he was the big brother, who made her laugh the hardest and made her tough, strong and confident.

But mostly they simply remembered.

'You don’t know who you messed with'

Jelani Day began working toward his master’s degree in speech language pathology this summer in pursuit of his dream of becoming a doctor. He was reported missing from the Bloomington-Normal area Aug. 25. His body was found Sept. 4 and identified Sept. 23. A cause of death is pending further investigation and toxicology testing, police have said.

Bolden Day and her family pushed to bring his story national attention, working to find her son when he was missing and working to find out what happened to him now since his death was confirmed.

“As long as I’ve got breath in my body, I’m going to find out what happened to my friend,” said Brandon Jackson, a friend of Day’s from his time on the House Arrest 2 dance team at Alabama A&M University, where he completed a bachelor’s degree in communicative sciences and disorders.

That sentiment was repeated by nearly every person who spoke Saturday, with Day’s aunt Terri Davis saying, “my sister is a fighter. … You don’t know who you messed with.”

Day was an active member of several university organizations during his time at AAMU and representatives from those organizations made resolutions dedicated to him during the service. They include: the National Alumni Association of AAMU — Chicago Alumni Chapter, House Arrest 2, 100 Black Men of Greater Huntsville and the Collegiate 100, Black Speech-Language Pathology Association and the Nu Epsilon chapter of the Omega Psi Phi Fraternity Inc.

His fraternity brothers also held a short memorial service Saturday morning before the celebration of life, in which they said Day’s life was “full of dedication and perseverance” and their brotherhood extends beyond the grave.

'His name will be remembered'

Day’s cousins and other community members called him “Dr. Jelani Day,” honoring him with the title he worked so hard for.

“Doctor — we’re going to give him that title,” said Tammy Wilson, a member of Day’s church in Danville, Saints Synagogue Church of God in Christ, with applause filling the room. “We’re gonna put that honor on his name.”

Paul Armond, a childhood friend of Day’s, said Day would always be in his heart and told the crowd Day had been working to be a doctor and speech therapist “so he could help people like me who have trouble talking.”

AAMU students, faculty and staff will hold a Memorial Service and Balloon Release for Jelani Day on Wednesday, October 6 at 6:11 p.m. on The Quad. pic.twitter.com/rF4GsbhiSv

Jazmyn Thomas, a staff member at ISU, read a poem she wrote in honor of Day, called “I see Jelani Day.” She described him as irreplaceable and said “when Black men move their tassels and toss their graduation caps in the sky, my eye will see Jelani.”

Smiles and laughter were as present as the grief-laden tears throughout the nearly four-hour service.

A choir of community members performed several songs, because as Bolden Day said, her son loved music. His four siblings took a turn behind the mic with support from the choir and throughout the service, the joyful music reinforced the celebration, as the singing and clapping extended from the stage into the audience, where many rose to their feet, raising their hands in praise.

Day will be buried Monday at Springhill Cemetery. Bolden Day said they will lay her son to rest, “but I’m not going to rest. I can’t rest because I don’t know what happened to Jelani.”

Day’s father, Seve Day said he was grateful for the 25 years he had with his son, but “I hurt. I will continue to hurt when this is all over.”

His family remembered Day as a debater, protector, lover and a God-fearing man.

“He is not ordinary,” Davis said of her nephew. “His name will be remembered. His name shall ring forever. His name is Jelani Jesse-Javontae Day.” 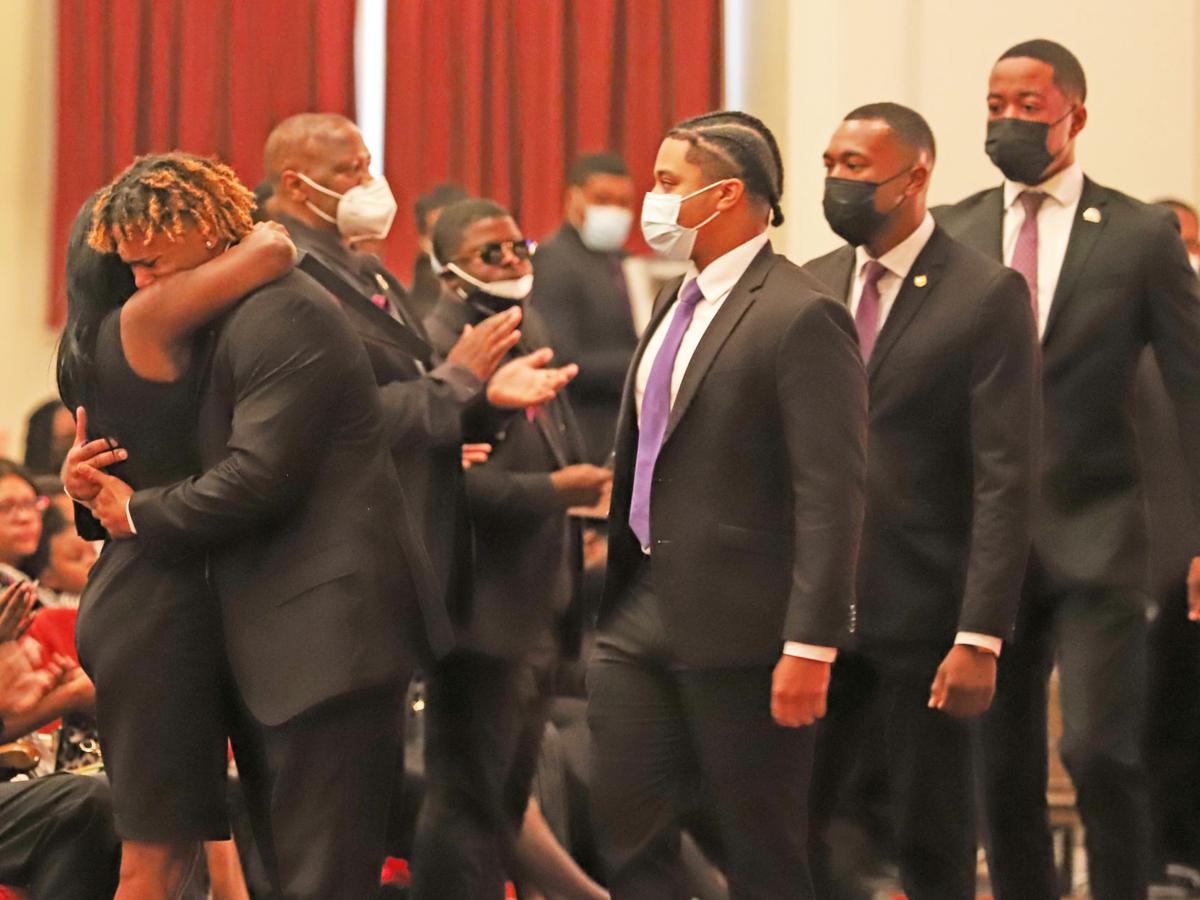 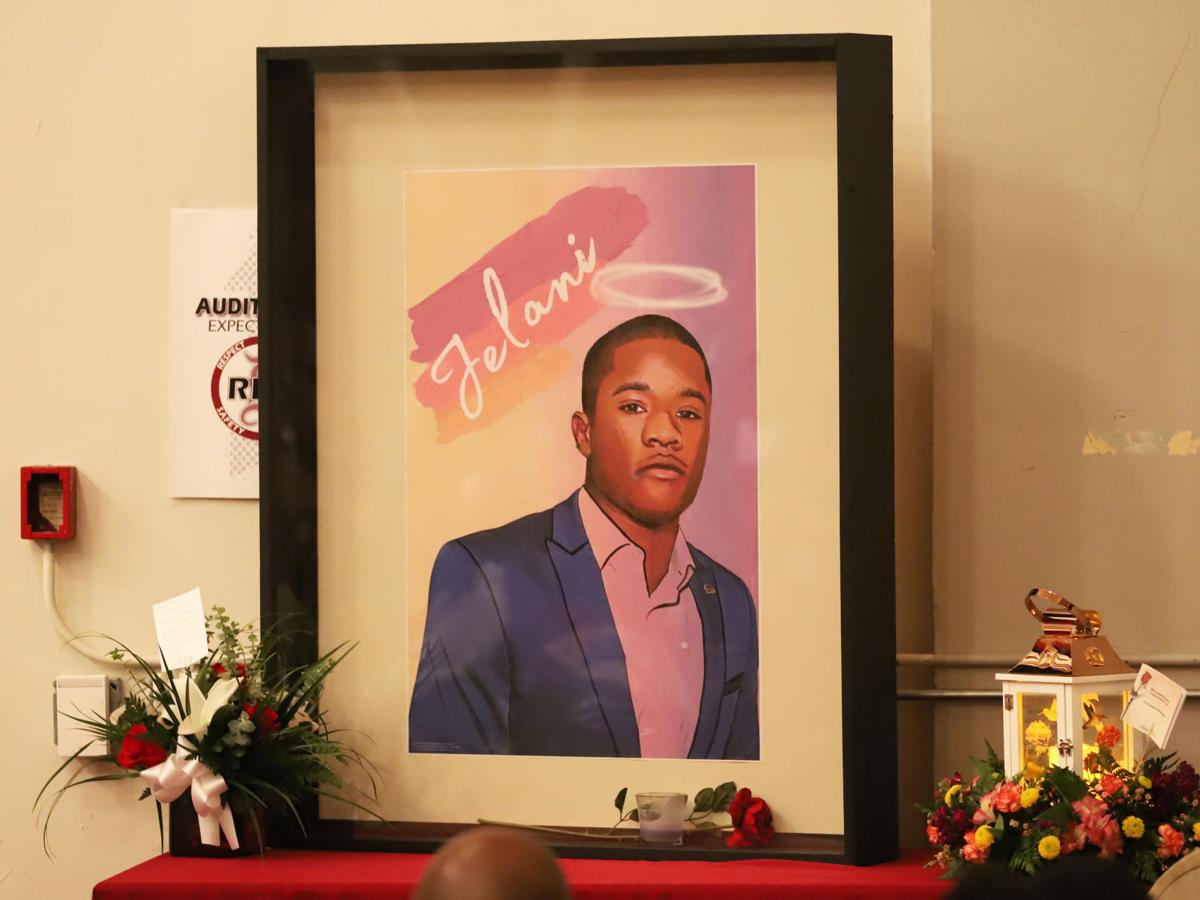 A drawing of Jelani Day is shown during a memorial service at Dick Van Dyke Auditorium in Danville High School on Oct. 9. 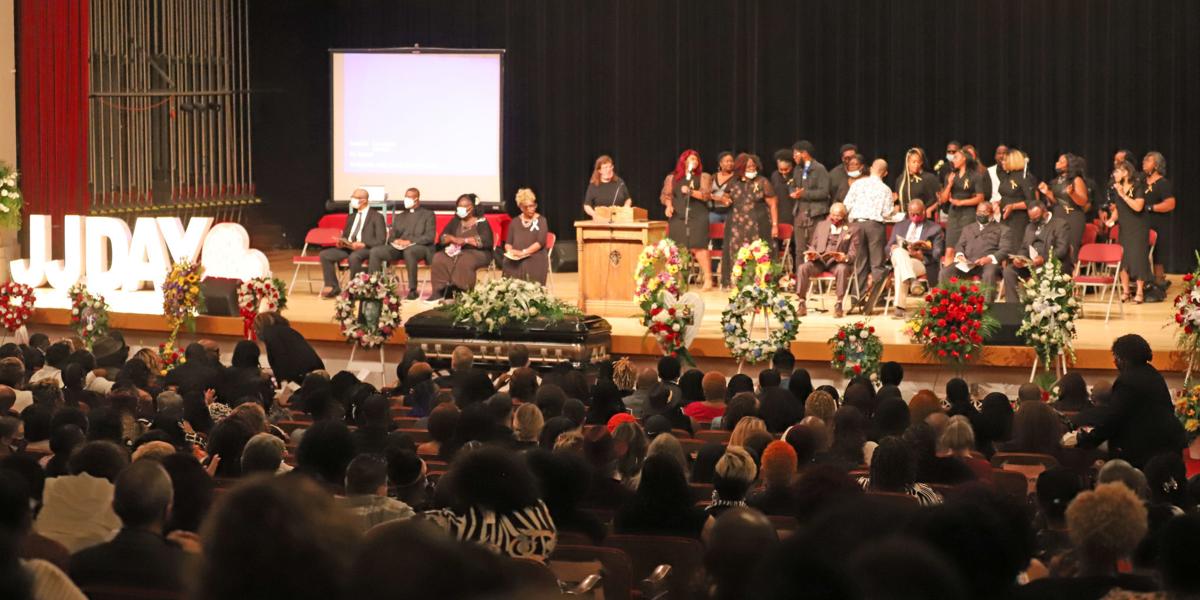 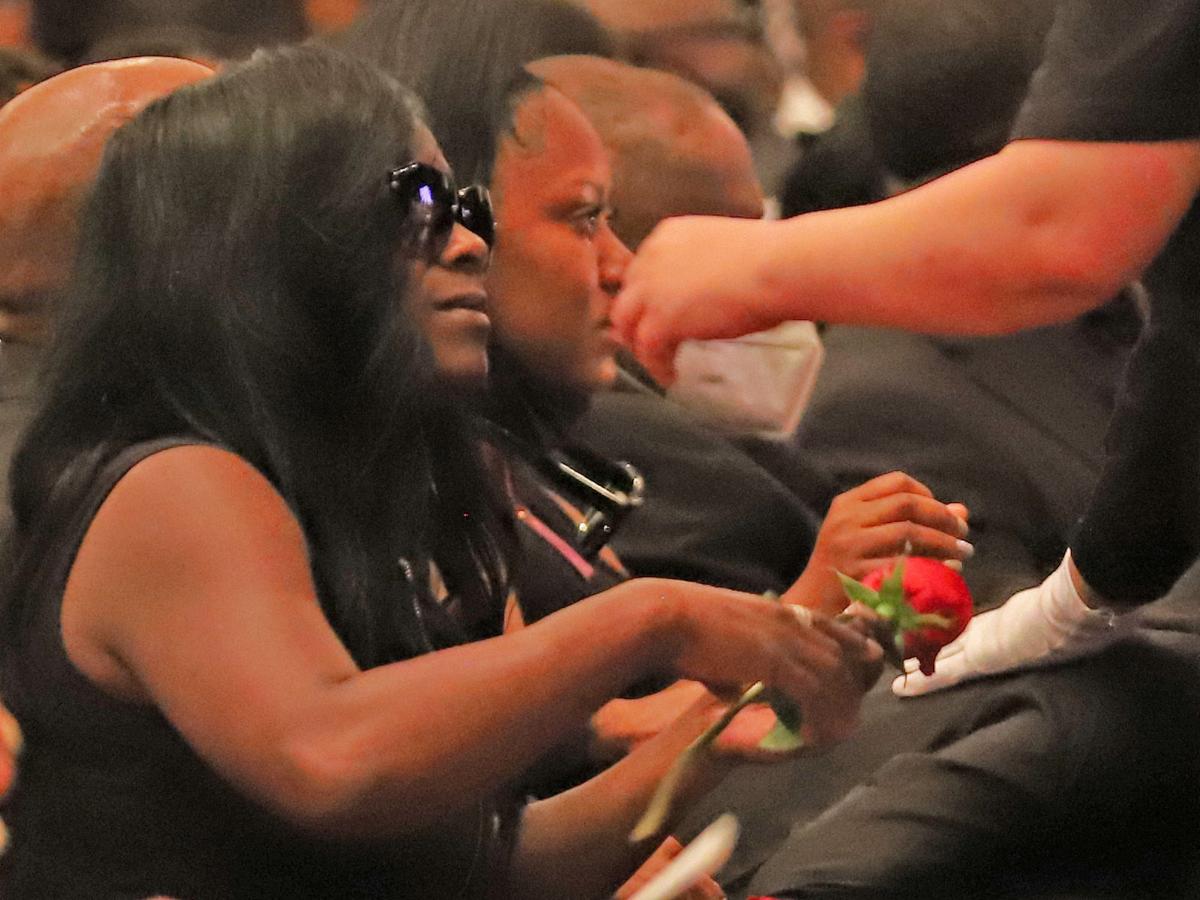 Carmen Bolden Day, mother of Jelani Day, accepts a rose from a choir member during the memorial service Saturday afternoon in Danville.