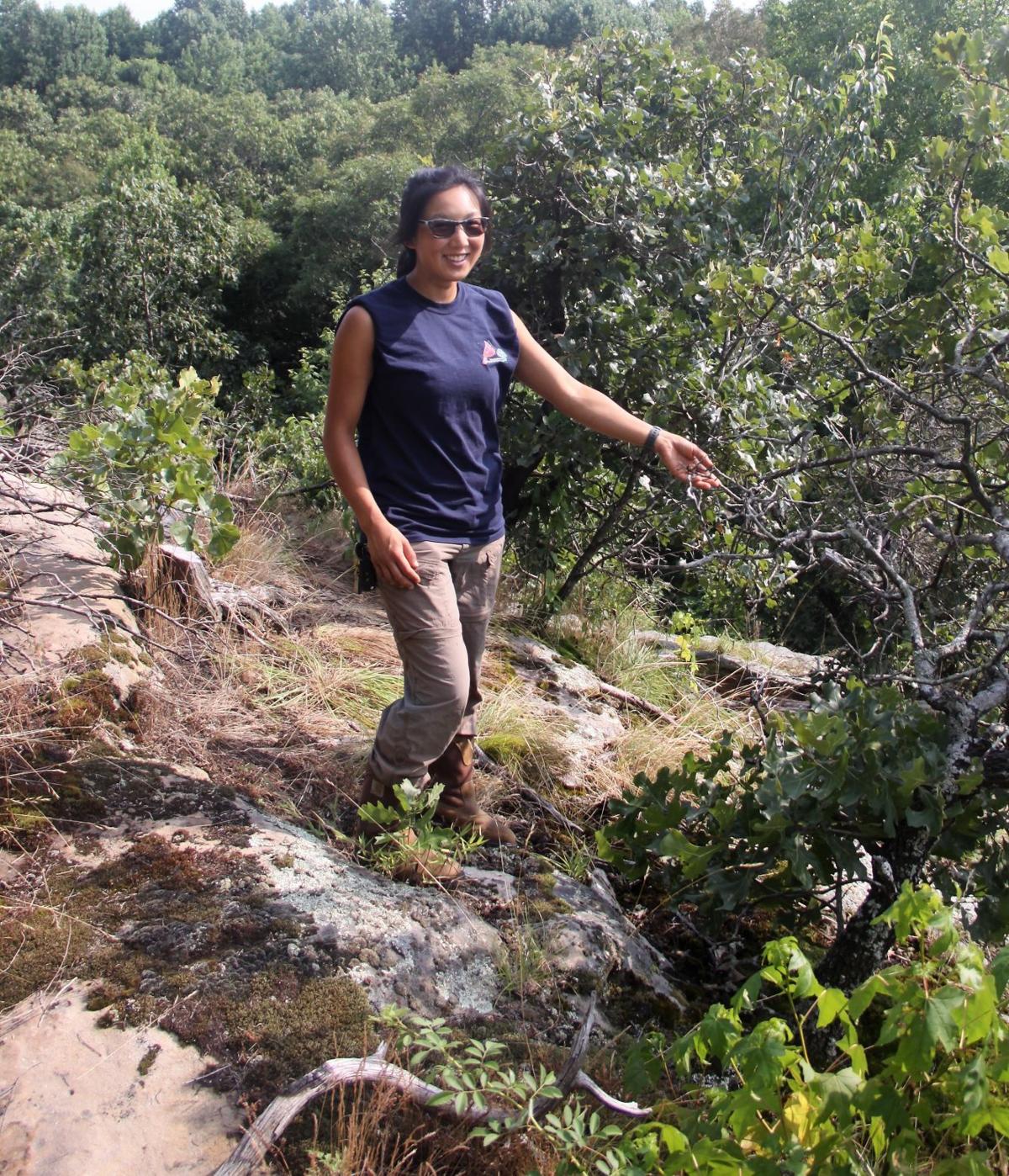 Illinois Natural Heritage Biologist Christina Feng in a section of glade at Ferne Clyffe State Park that is in the process of being restored. Restoration work began in 2017. 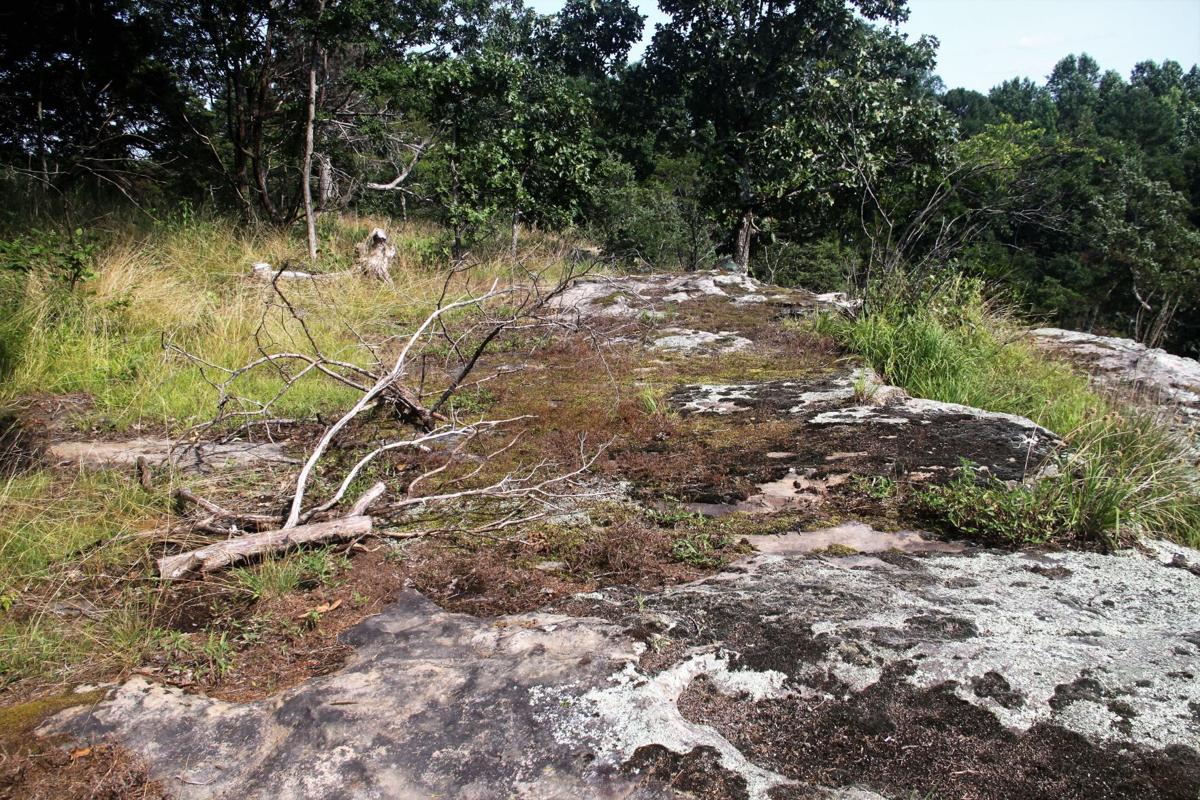 This is how a sandstone glade should appear. The Illinois Department of Natural Resources is in the process of restoring about two miles of glade habitat at Ferne Clyffe State Park.
Les Winkeler

FERNE CLYFFE – When Christina Feng, a natural heritage biologist for the Illinois Department of Natural Resources, looks into the future, she sees herself standing atop a wide-open glade at Ferne Clyffe State Park.

Glade habitat is unique and fragile. It consists of open rock at the edge of a bluff exposed to the sun with shallow soil and plant life that includes moss, lichens, various grasses and a smattering of cedar.  Much of the glade habitat at Ferne Clyffe has become overgrown with cedar and thick vegetation.

Yet, Feng’s vision is realistic.

The IDNR has been in restoration mode at Ferne Clyffe, located just south of Goreville, since 2017. And, although the word is tedious and backbreaking, progress is being made. There are several prime examples of glade habitat on display. She estimates there are about two miles of glade habitat at the park.

“There are species here that are very sensitive to human activity. These low mosses and lichens can be easily trampled or worn out from foot traffic. That will facilitate the invasion of exotic species and just overall make the system less resilient. It’s a balance we’ve talked about to give people spaces to appreciate what was here and also have them be responsible in how they treat it.”

“Fire suppression here is a big thing,” she said. “One of the main invaders here is a native species, which is the eastern red cedar, but it’s very sensitive to fire. With fire suppression it’s been allowed to take over and expand. Once that happened, it set a feedback cycle into motion where it suppressed vegetation that burns more readily. It suppressed growth of the ground layer in general and it provided less efficient fuel for fires to carry if it ever happened.”

The restoration project is something of an anomaly. The work – cutting and clearing cedar – is hard. Yet, the known science of restoring glades is relatively simple, consisting of burns, removing exotic species and thinning the cedar.

“It’s been a long time since this trend of decline has started, so it takes a lot of work,” Feng said. “It’s labor intensive to cut down cedars and get that material off. But, the time in which it takes the community to respond and recover is relatively quick compared to like an agricultural field that you’re trying to re-forest where you might need 120-150 years to get that mature forest back.

“It’s really rewarding to work in places like this where the fruits of your labor are readily apparent after a few years of work. It just makes you want to go forth and keep doing this work. We're lucky in Southern Illinois. These bedrock communities are not found in the rest of the state, so we have to take care of them.”

Some areas of Ferne Clyffe are healing nicely. But, Feng said biologists move cautiously. The work is done in phases to see how the environment responds.

“This is because a lot of the work in restoration is unknown,” she said. “It gives us the opportunity to test an action and see if the response is positive or not. In general, it’s really hard to grow back a tree that you’ve cut, by going more slowly we can avoid situations where we take out too much at once.”

The goal is to restore the habitat to the point that it can be self-sustaining through the use of burns.

“We look for the community itself to tell us how it’s progressing and where it wants to be,” Feng said. “When we get to a point where the community appears stable and we’ve reached a species diversity that is representative of what it used to be, then we can switch over into maintenance mode, but we don’t know when that will be.”

Returning the glades to their pre-European settlement state is Feng’s goal.

“For me, it’s an emotional connection," she said. “It’s the intrinsic value of these places. There is just something so special about knowing that this assemblage of species has developed over a millennium or more, and that there is a place for them in the future. They aren’t a relic of the past.”

Illinois Natural Heritage Biologist Christina Feng in a section of glade at Ferne Clyffe State Park that is in the process of being restored. Restoration work began in 2017.

This is how a sandstone glade should appear. The Illinois Department of Natural Resources is in the process of restoring about two miles of glade habitat at Ferne Clyffe State Park.
© Copyright 2021 The Southern Illinoisan, 1001 E. Main Street Professional Park #2 Carbondale,IL | Terms of Use | Privacy Policy | Do Not Sell My Info
Powered by BLOX Content Management System from TownNews.com.
You don't have any notifications.