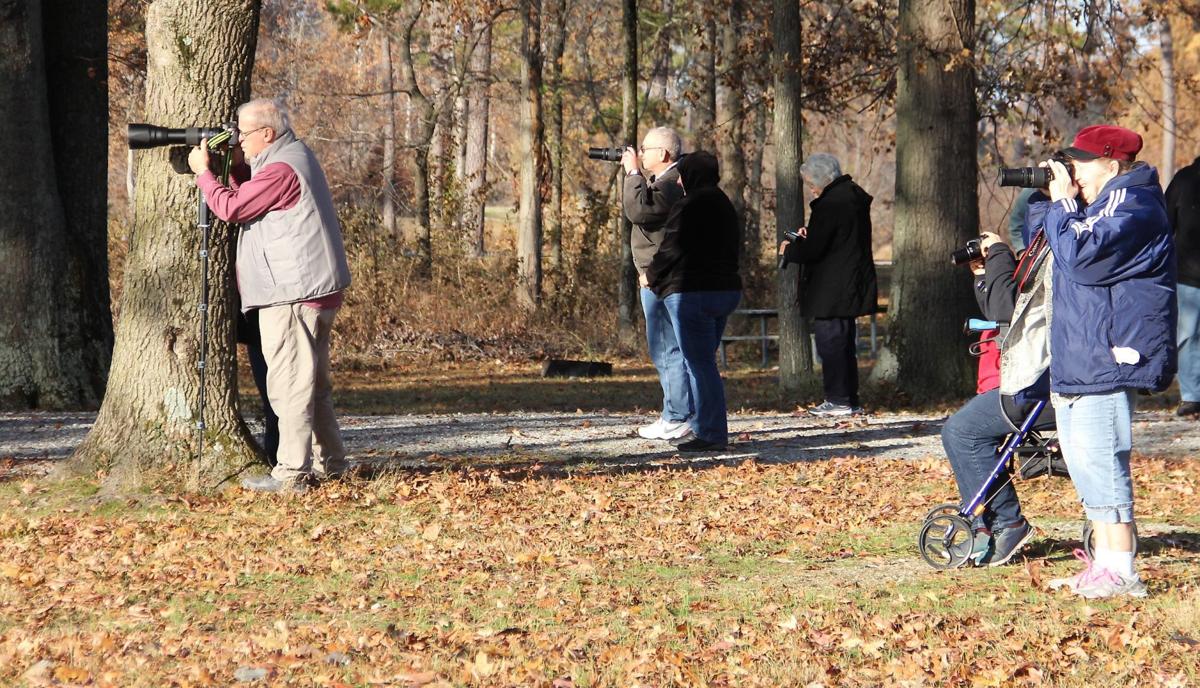 This group of white pelicans caught the attention of the Crab Orchard Photo Group recently. 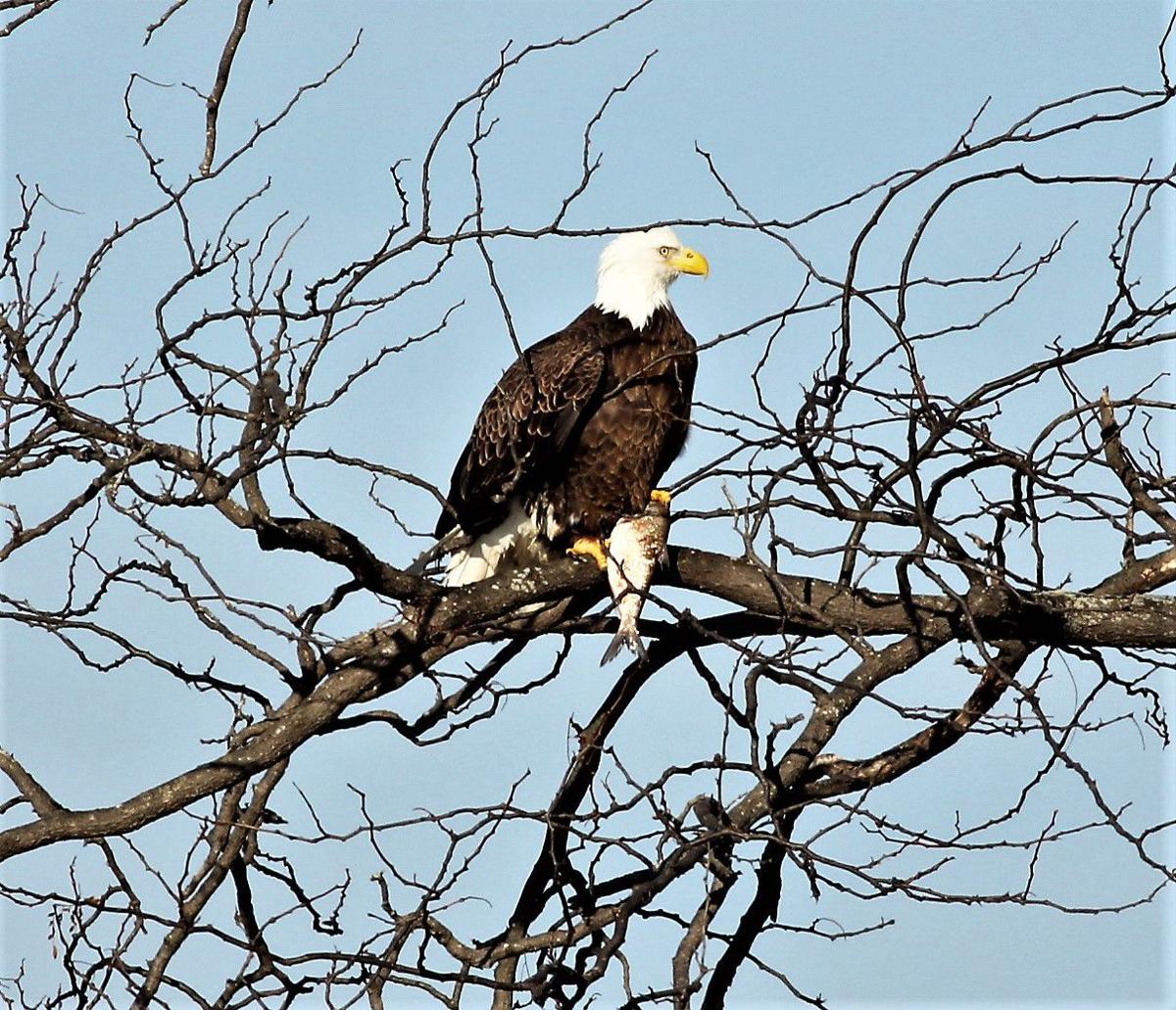 This bald eagle, with his shad lunch, was a bonus attraction for the Crab Orchard Photo Group.

MARION — A parade of cars slowly made its way along Refuge Drive on the Crab Orchard National Wildlife Refuge last Wednesday morning.

The parade came to a halt as four does were spotted foraging in a small grassy field. Immediately, car windows rolled down and camera lenses popped through the openings.

Welcome to the monthly meeting of the Crab Orchard Photography Group. The group is the brain child of Herrin resident and Crab Orchard Refuge volunteer Jim Osborn.

“Every time I’d go I’d see lots of people with cameras, so I asked the refuge manager if we could start a group,” Osborn said.” He said, ‘Sure, give it a try.’ We had over 30 people come to the first meeting. I would say we get 20-25 people each month. We have 70 people on our email list and it seems we’re adding people all the time.

“I thought it was an opportunity to get people together and help them to learn to improve their photography and take advantage of the resources this refuge provides.”

The group meets at the refuge’s Visitor Center at 8 a.m. the third Wednesday of the month. The group forms a caravan and heads onto the refuge to photographically capture the quarry of the day – whether that be landscapes, butterflies, Canada geese, or as was the case Wednesday, white pelicans.

“We meet rain or shine because some people are driving longer distances,” Osborn said. “We have some people coming down from Nashville, from Metropolis, some come over from Steeleville. I’ve even had people contact me from the St. Louis area.

“I don’t want to disappoint because sometimes it’s a little difficult to cancel at the last minute if people are driving. We’ll do a program if people don’t want to go out. Usually, we just dress for the weather and we’ll go out for a little while. We usually let the season dictate what we go out to photograph.”

The group usually spends a couple hours taking photographs before re-assembling at the Visitor Center to look at photos. Normally the group concentrates on open areas of the refuge that the general public can access.

“This group is really a mixed group,” Osborn said. “We have some people that have been doing photography for a long time, but we have a lot of people who are beginners, novices. One of the reasons people join this group is to learn more about how to use their camera or how to take the kind of pictures they’d like to take.”

Of course, when dealing with nature there is always an element of unpredictability. In addition to a couple hundred cooperative white pelicans, the group was treated to a trio of bald eagles that landed in a nearby tree.

As most members of the group jockeyed for position to photograph the eagles, Du Quoin’s Bob Cook took a seat on a nearby picnic table just to savor the moment.

“I’ve always taken pictures, but finally purchased a digital single lens reflex with a good lens so I could get pictures,” he said. “Honestly, it has to a large extent made me realize that we serve quite a creator. You see things with these lenses you couldn’t see with the naked eye, the incredible detail in these animals – flying and walking. It’s just an amazing thing.

"Now, sometimes I just go back and look at my old pictures and just be amazed. I look at the back of a blue jay – it’s artwork. It’s incredible the complexity of that. A lot of it is just appreciating nature.”

Joining the group is easy – just show up with a camera at the Visitor Center at 8 a.m. the third Wednesday of the month. For more information, call 618-997-3344.

Tips for mountain biking during pandemic

The trails themselves never closed during the shutdown of public spaces amid the coronavirus pandemic in some areas, so in reality, little ever changed for mountain bikers.

Snapshots of Tony Hawk’s life already include a ridiculous amount of, well, ridiculousness.

The bicycle business is booming across the country as Americans look for new ways to exercise and get out of the house while adhering to stay-at-home orders.

The State of Illinois’ modern deer hunting season was instituted in 1957.

This group of white pelicans caught the attention of the Crab Orchard Photo Group recently.

This bald eagle, with his shad lunch, was a bonus attraction for the Crab Orchard Photo Group.