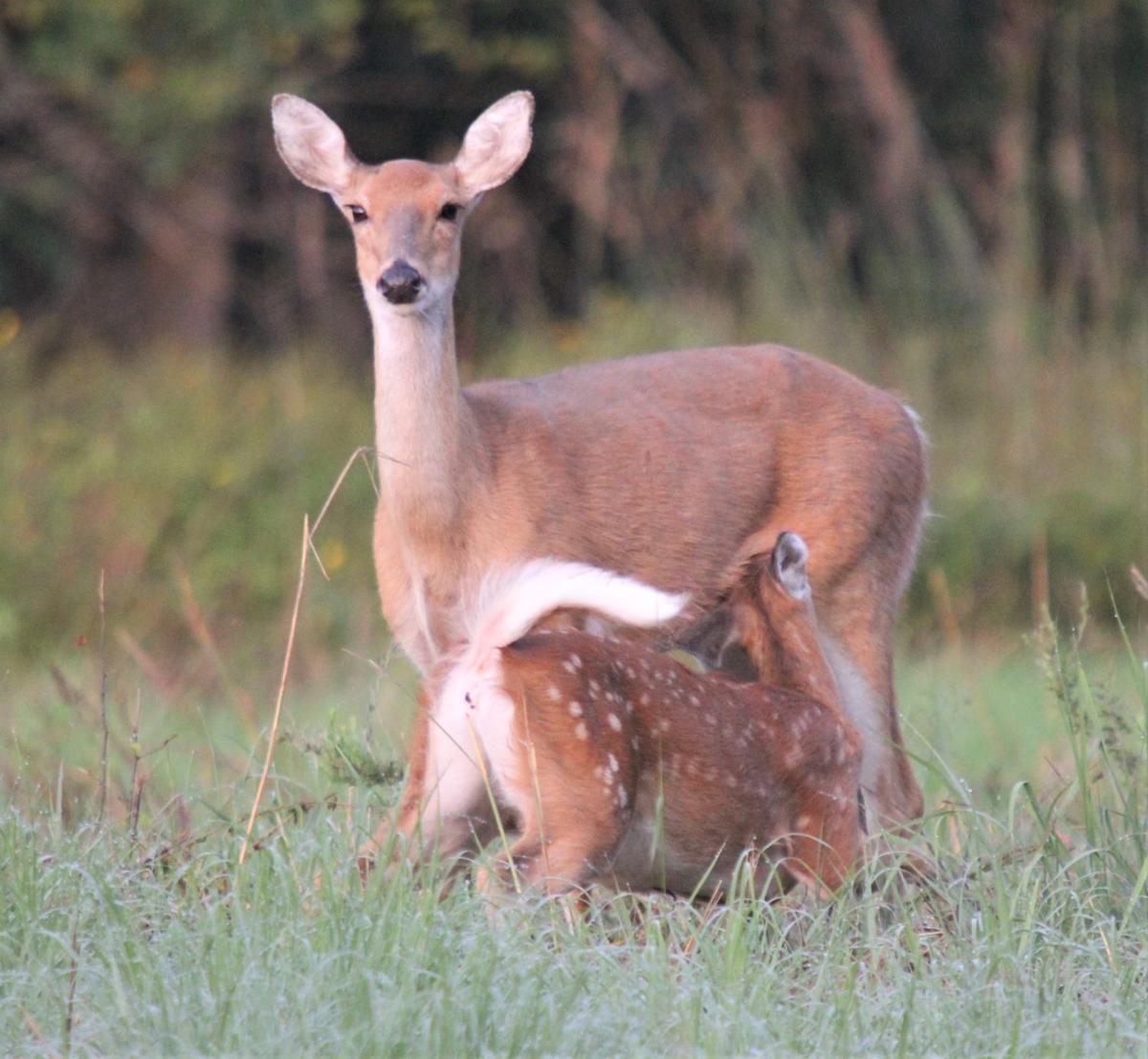 A fawn nurses on a spring morning at Crab Orchard National Wildlife Refuge. 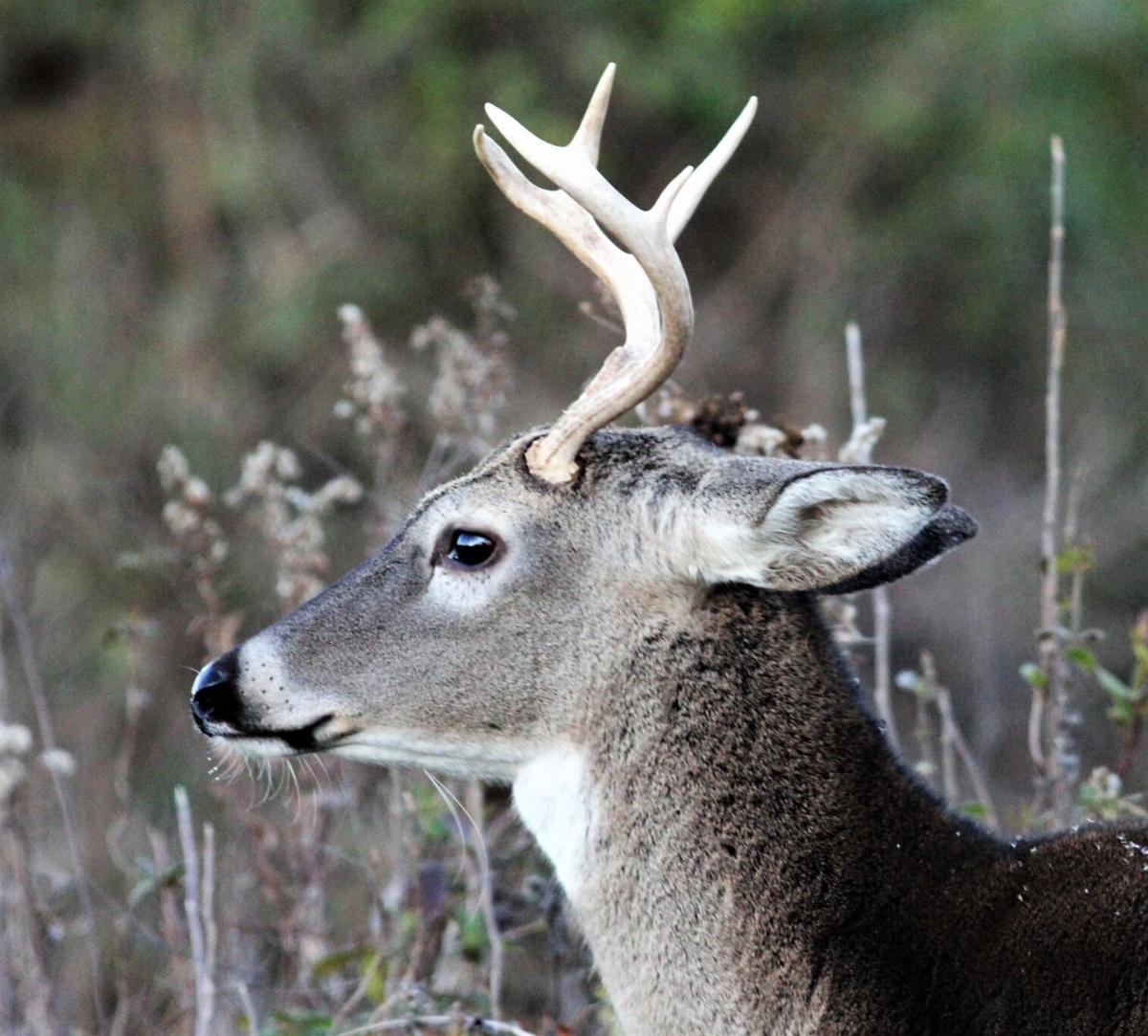 The Illinois archery season opened Oct. 1. Peter Schlichting, Deer Project Manager for the Illinois Department of Natural Resources, said the state's deer population has been stable for the past decade and he expects an excellent season.

LES WINKELER For The Southern

When Illinois deer hunters take to the woods this weekend they can be confident of success, or at least of seeing plenty of deer.

“The 2021-22 Illinois deer season is shaping up to be another strong year and with 108 total days of deer hunting opportunity,” said Peter Schlichting, Deer Project Manager for the Illinois Department of Natural Resources. “Weather conditions are looking good with an average to moderate winter and ample rainfall this spring and summer for the majority of the state.

Northeastern Illinois and parts of Southern Illinois have experienced near-drought or drought conditions which may influence deer behavior and body condition. Hunters should be aware of this and spend extra time scouting and setting up with water locations in mind.”

As has been the case for the past decade or so, the Illinois deer population has remained stable. That is partially due to management, conservation practices and the lack of deer disease in the past year.

Southern Illinois populations have been particularly stable in recent years.

“Most counties in Southern Illinois are stable and near population goals,” Schlichting said. “There are a few counties, however, where we are seeing increases in deer removal permits (DRPs), a sign that local populations are above target. Several counties, including Union, Pulaski, Massac and Alexander are currently below goal and we are monitoring their progress closely.

“A lot of factors have influenced the Illinois deep population in the last decade. Every year the Wildlife Division of IDNR sets permit quotas for each county after taking into account harvest data, deer-vehicle-accident information, DRP numbers, and input from district biologists. We try to avoid knee-jerk reactions and strive to maintain populations near goal.”

While chronic wasting disease and blue-tongue disease have been issues in other parts of the state, Schlichting said the illnesses have had little impact on the Southern Illinois herd.

“There have been no confirmed cases of EHD this year and no major die-off events,” he said. Hunters are encouraged to report and sick or dead deer to IDNR.

“Barring fall weather events that delay harvest, the majority of crops are on track to be harvested by the first firearm season. The rut, which typically peaks around November 14, will primarily fall during archery season, but firearm hunters can expect rutting behavior to still be occurring during first firearm season, Nov. 19-21.”

In addition to good numbers of deer, the Illinois herd remains balanced in term of sexual make-up.

“We monitor sex ratios in deer harvest, which is remarkably stable from year-to-year,” Schlichting said. “Illinois hunters harvest approximately 55 percent males and 45 percent females each year. Highly biased sex ratios are usually a localized phenomenon due to harvest regimes. Because we manage deer at the county level, sex ratios are a small component of setting quotas. Changes to antler-less only permits are more common if our goal is to grow or reduce the deer populations within a county.”

The condition of the Illinois deer herd makes the state a popular destination for trophy hunters.

“I believe Illinois is still a great place for trophy hunters and boasts several world record bucks,” Schlichting said. “From providing essential habitat (food, water, cover) to keeping density in check and passing on young bucks, management practices have everything to do with producing trophy bucks.

“Over much of Illinois, private landowners are the key drivers of maintaining or creating trophy deer hunting opportunities.”

If there is a cardinal rule regarding bird feeding during the winter, it’s once you start feeding, don’t stop.

Work on the Douglas-Hart Nature Center began in the late 1960s with the planting of 10,000 trees, said Jennifer Day Tariq, executive director of the Douglas-Hart Foundation. Now, half of the 70 acres is woodlands.

A fawn nurses on a spring morning at Crab Orchard National Wildlife Refuge.

The Illinois archery season opened Oct. 1. Peter Schlichting, Deer Project Manager for the Illinois Department of Natural Resources, said the state's deer population has been stable for the past decade and he expects an excellent season.