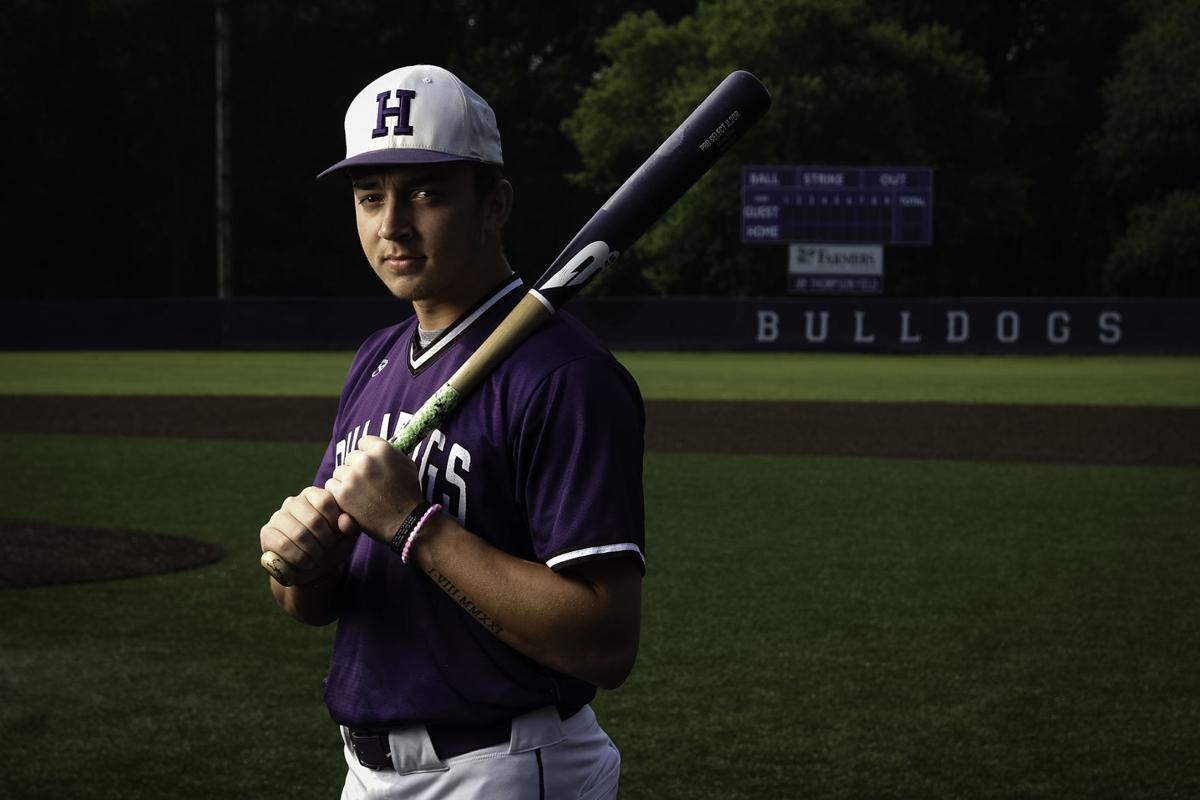 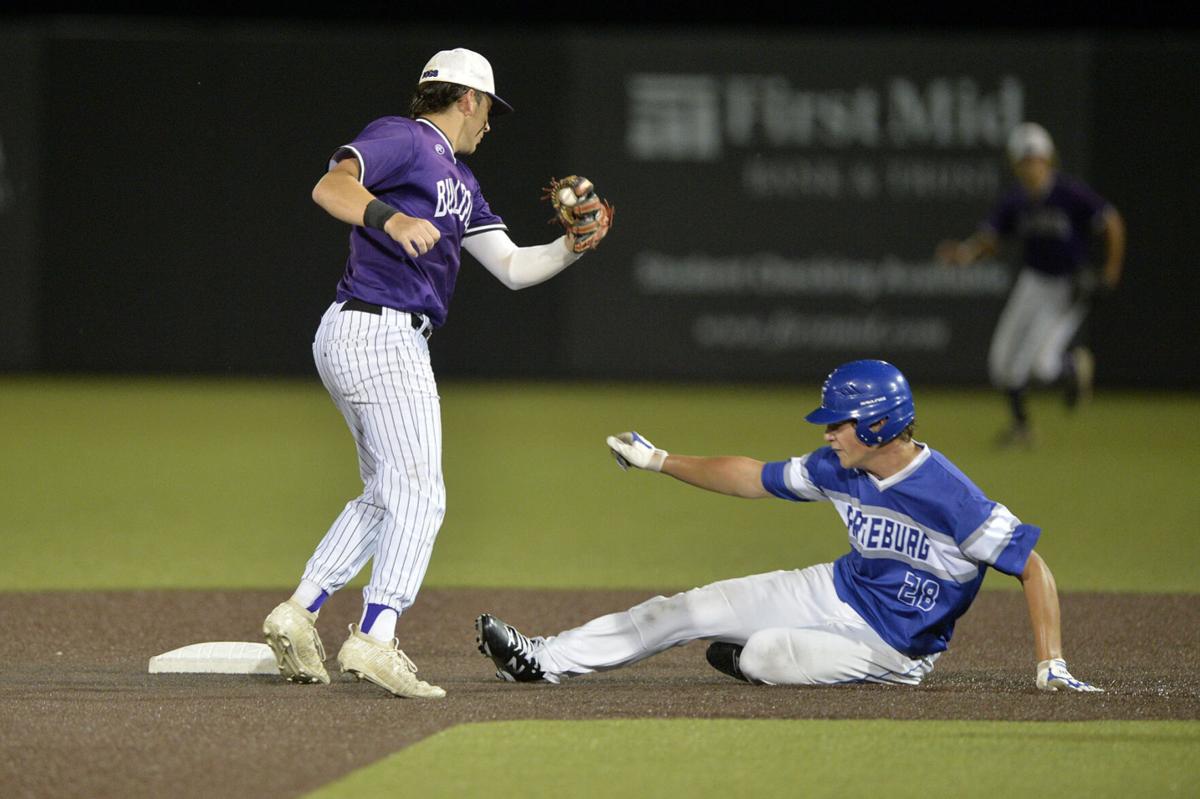 Freeburg’s Lane Otten (28) steals second base ahead of the tag by Harrisburg second baseman Javie Beal (14) in the first inning of the 2A Super-Sectional at Itchy Jones Stadium on Monday in Carbondale.

Javier Beal is the real deal.

The Harrisburg product has been since his freshman year, according to Bulldogs baseball coach Jay Thompson.

“Javie was unlike a lot of kids good enough to play as a freshman,” said the longtime coach. “He just kept getting bigger, faster and stronger.”

Beal grew into a five-tool player that anchored the Harrisburg baseball club to a 30-2-1 record in 2021. Batting leadoff, Beal was everything Thompson and the team could have hoped for with a .567 batting average and .613 on-base percentage.

“The amount of work he put in is something nobody saw, but the results were easy to see,” said Thompson. “Javie’s a National Honors Society student, beloved by his teachers, polite and hard working kid.”

The Parkland College commit earned his senior statistics with 10 home runs on 55 hits with 44 RBIs and 42 runs scored on 23 stolen bases. Beal also drew 16 walks, 32 singles, 10 doubles and three triples while hitting from the left side and playing stellar defense as a right-handed second baseman.

These achievements begin the conversation of what named Beal The Southern Illinoisan’s Baseball Player of the Year for 2021.

“I’ve always been around the game of baseball,” said Beal. “My dad played in college and was drafted by the Atlanta Braves. Him and my entire family have always played a big part in directing me to what makes baseball great.”

Mentioning great baseball and not including Beal’s name on defense would be a disservice to his overall talent. The senior starred at second base but was more than capable of playing multiple infield spots.

Beal sparkled on a talented Harrisburg defense that suffered just 11 team errors in 2021. Of those blemishes were eight infield errors, and Beal had two of them, but made up for it by assisting on 21 double-plays this past season.

“Javie was always a good defender,” said Thompson. “One of his errors came in a downpour; he picked a wet ball up and threw it into the dugout. But his work ethic in the weight room set the tone for our team.”

Beal entered his final year expecting to hit third or fourth in the lineup. Then Thompson threw a curveball at his star player before Harrisburg’s season-opener against Hardin County.

“Coach Thompson comes up to me before BP and tells me I’m hitting leadoff,” said Beal. “Whoever’s hitting leadoff is important to every team, so I felt like I had an opportunity. We were facing Mount Carmel pitcher Kaleb Applebey, one of the best pitchers I’ve ever faced, and I took a 93 MPH fastball and fouled it straight back.

“I think that showed our guys we could hit that guy.”

“(Javie) led off the Mount Carmel game and pulled a sharp single to right field,” he said. “If he had gone up there and got blown away, that might have put some doubt in the minds of other kids, but it meant a lot when he showed he could do it.”

All of Beal’s hard work and preparation has landed him a starting spot with the Parkland Cobras. He’s moving to Champaign on Aug. 6 just before his first practice on the 10th.

The former Bulldog has big plans for his future.

“If I could plan it out, I want to play two years at Parkland before transferring to a Power 5 Conference school that fits me best,” said Beal.

Beal plans on studying business with dreams of owning a business to teach the game of baseball.

He’ll remember his team’s ability to remain humble while ranking as one of the top Class 2A baseball programs during his high school career.

“I’m going to remember all the good times we had,” said Beal. “Everybody in the dugout can say we’re friends. I think it was evident this year that we didn’t get ahead of ourselves. The main thing that I love about Harrisburg is that we know who we are; we have to earn everything and do everything we can control.

“That’s why they’ll always be good.”

Beal said a spark was lit beneath him when his junior season was cancelled due to the COVID-19 pandemic.

“That was a big year for me and my class,” he said. “Not only were we going to be great, but I was pretty serious about playing in college and that messed up my recruiting.”

Beal allowed that time to reflect on what he needed to do as a senior.

“Coach Thompson is one of the best and knows the game in and out. Our assistant coach, Terry Tripp, has been around the game forever and got to games three or four hours early to help me prepare. Coach Allen, our strength coach, he’d open it up for us even during COVID-19.

“I think that made a huge difference.”

Baseball Player's of the year

Look Back: The Southern's 2021 Player of the Year spring season recipients

Watch now: Half an effort not enough for Bears defense

Freeburg’s Lane Otten (28) steals second base ahead of the tag by Harrisburg second baseman Javie Beal (14) in the first inning of the 2A Super-Sectional at Itchy Jones Stadium on Monday in Carbondale.