Get the latest baseball news delivered to you!

Sign up to receive professional baseball news in your inbox every week.

Become a Member
Read Today's E-edition
Share This
Suddenly, the Blues are healthy — and they look good
0 Comments
Share this
1 of 3 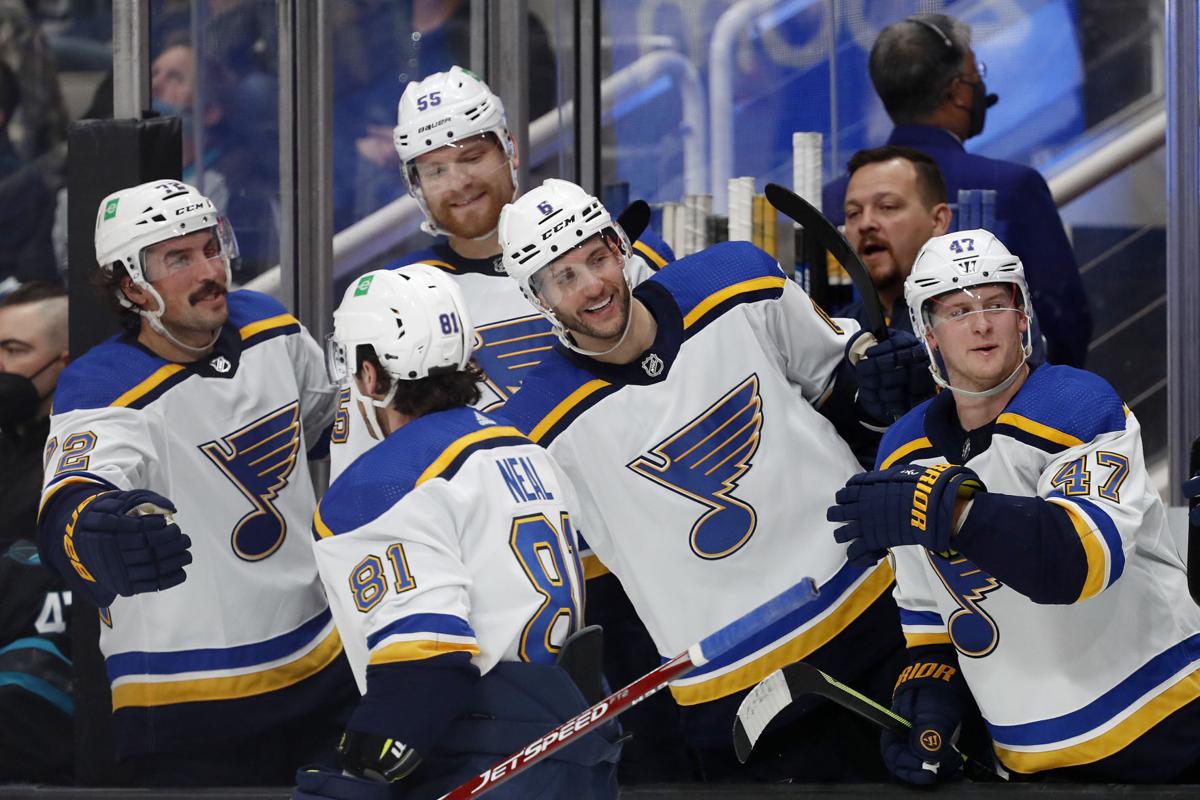 Blues left winger James Neal (81) is congratulated for his goal during the second period of the team's NHL hockey game against the San Jose Sharks on Thursday, Nov. 4, 2021, in San Jose, Calif. (AP Photo/Josie Lepe) 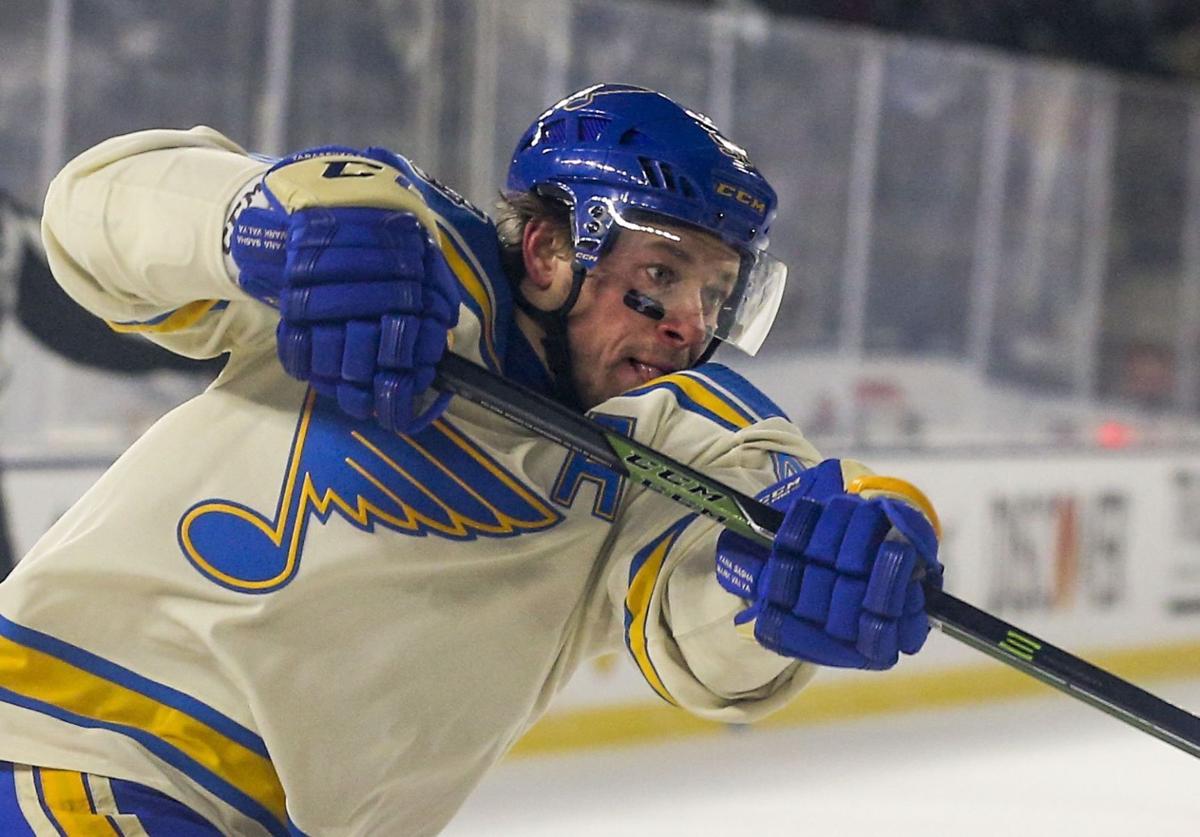 Blues right winger Vladimir Tarasenko takes a shot in the third period of the NHL Winter Classic, against the Minnesota Wild at Target Field in Minneapolis, Minn., on Saturday, Jan. 1, 2022. The Blues won 6-4. Photo by Colter Peterson, cpeterson@post-dispatch.com 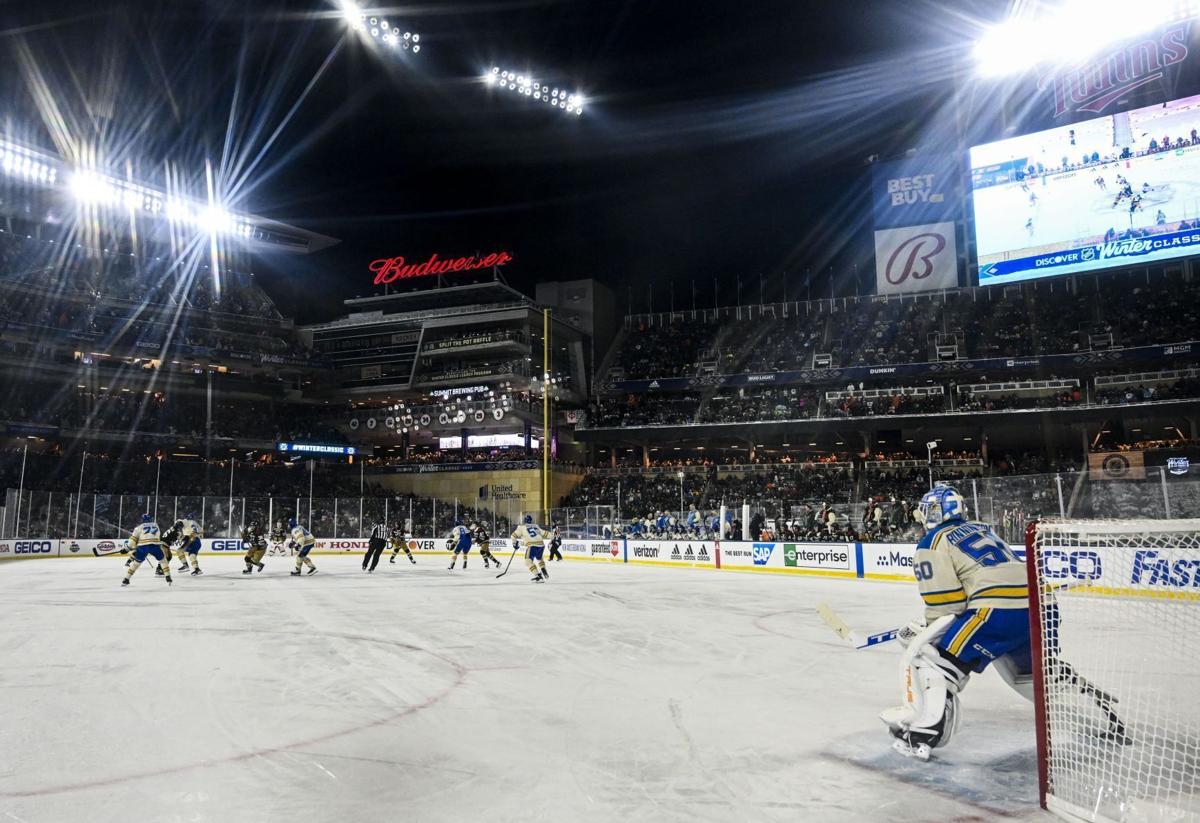 Blues goaltender Jordan Binnington watches play in front of him Saturday night in the second period of the Winter Classic, in which his team beat Minnesota 6-4 at Target Field in Minneapolis.

Something strange and wonderful is happening to the Blues’ roster.

Unless, of course, you happen to be James Neal — who was placed on waivers Sunday. Or one of the three players sent back Sunday to the Springfield Thunderbirds: goalie Charlie Lindgren, forward Alexei Toropchenko and defenseman Calle Rosen.

But five injured players returned to the lineup Thursday, against Edmonton. Four more returned from either injury, COVID, or non-COVID illness in Saturday’s Winter Classic contest against Minnesota.

That’s nine players, more than one-third of the active roster, returning over three days. Many of those nine are skilled forwards. And skill never is a bad thing.

So moves had to be made. And those taking place Sunday left the Blues with 21 players on their active roster — or two under the maximum — with 12 forwards, seven defensemen and two goalies.

The Blues still have two players on the COVID list, defenseman Robert Bortuzzo and forward Dakota Joshua. Brayden Schenn (upper- body) remains on injured reserve. And Nathan Walker is on the taxi squad.

Bortuzzo and Joshua could come off the COVID list as early as Monday, and Schenn’s removal from IR is imminent. Schenn, in fact, came close to playing in Saturday’s 6-4 win over the Wild at Target Field in Minneapolis.

“We talked a lot,” Blues coach Craig Berube said Saturday after the game. “It was a tough decision. I think I probably pushed him out of playing more than he did. I didn’t want to take a chance. In the elements here, with the cold and everything, I thought it was taking a chance.”

But Schenn and Bortuzzo probably will go to the active roster this week, and Joshua either goes to the taxi squad or back to Springfield.

“It's nice to have guys back,” forward Vladimir Tarasenko said. “We don't play with a full roster this year; there's always somebody sick or injured or something.”

But that’s changed in a big way in the last few days, and the results have been eye-popping. The Blues combined for 10 goals with 16 assists in the victories over the Oilers and the Wild. Six of those goals and nine of those assists came from returning players: Jordan Kyrou, Robert Thomas, David Perron, Ivan Barbashev and Pavel Buchnevich.

“Honestly, this team can be pretty good,” Tarasenko said.

COVID has a mind of its own, and 14 Blues already have tested positive for COVID. But under NHL COVID protocols, once they’re on the COVID list they don’t have to be tested again for another 90 days.

Brandon Saad was the first Blues player to test positive, on Oct. 21. So he doesn’t have to be tested again until the end of January. All the other Blues who subsequently made the COVID list are longer down the calendar for their next test.

To summarize, a player can’t test positive unless he is tested. So the math looks good for the Blues on this, at least for a while.

That means barring another rash of injuries, Berube could have all or most of his roster together for a while. And now that it’s (almost) all together, it certainly looks like a formidable roster, one brimming with talent and potential.

How good can this team be?

“That’s a tough question,” Berube said. “We gotta just keep working on things and getting better. There’s a lot of hockey to be played. Like I said before, going into the springtime you want to be playing your best hockey. That’s still ahead of us.

As the Blues’ roster got healthier, it was just a matter of time for Neal in terms of his departure. Unless the veteran forward is claimed off waivers, his impressive NHL career may be nearing its end.

After a COVID-interrupted 2020-21 season, Neal worked out like crazy in the offseason and then signed with the Blues on a professional tryout contract before training camp. Spurred on by a hat trick in the Blues' preseason opener, Sept. 25 against Minnesota, he led the team with four goals in exhibition play and made the regular-season roster.

Seeing some second- and third-line duty at the start of the season, Neal played in 17 of the Blues’ first 18 games. He had power-play duty in most of those contests and had two goals and two assists through 10 games.

But his effectiveness seemed to taper after that. Then came a pivotal moment Nov. 24 in Detroit. Neal came out for the morning skate, but quickly left the ice because of a nagging upper-body injury. He never played another game for St. Louis.

Neal was placed on long-term injured reserve on Nov. 27 and had skated several times in practice since then. But he aggravated the injury at least once in practice over that span, and then had a brief stint on the COVID list last week.

Solid play by St. Louisan Logan Brown since he was promoted from Springfield on Nov. 28, and the return of Klim Kostin from a lengthy upper-body injury, made Neal expendable. A three-time All-Star, with 10 seasons of 20 or more goals, Neal leaves the Blues just four goals shy of 300 in his career.

As for Lindgren, Toropchenko and Rosen, they had been placed on the taxi squad just on Saturday. But general manager Doug Armstrong isn’t a huge fan of the taxi squad — he’d rather have players in the organization playing games whenever possible. So it’s off to Springfield, Mass., for them.

Get the latest baseball news delivered to you!

Sign up to receive professional baseball news in your inbox every week.

In the final hours of transactions before Major League Baseball initiated the lockout that persists even as a new year begins, righthanded pitcher Marcus Stroman, in the span of a two-word tweet, authored a plot twist.

Blues left winger James Neal (81) is congratulated for his goal during the second period of the team's NHL hockey game against the San Jose Sharks on Thursday, Nov. 4, 2021, in San Jose, Calif. (AP Photo/Josie Lepe)

Blues right winger Vladimir Tarasenko takes a shot in the third period of the NHL Winter Classic, against the Minnesota Wild at Target Field in Minneapolis, Minn., on Saturday, Jan. 1, 2022. The Blues won 6-4. Photo by Colter Peterson, cpeterson@post-dispatch.com

Blues goaltender Jordan Binnington watches play in front of him Saturday night in the second period of the Winter Classic, in which his team beat Minnesota 6-4 at Target Field in Minneapolis.