When LeBron James scored his sixth point on Tuesday during the Los Angeles Lakers' game at Brooklyn, it meant he had reached 36,387 in his career.

That put him 2,000 points shy of Kareem Abdul-Jabbar.

Start the countdown. It's no longer a question of if James will pass Abdul-Jabbar as the NBA’s all-time scoring leader, but when. At his current pace, it’s possible that James may move into the No. 1 spot by this time next season, maybe even a bit earlier.

“As I’ve continued to climb the ranks, it is natural, human, to look at it and see where you are and see if it’s even possible, see if you’re capable,” James said.

James is going to get a taste of what it’s like to catch Abdul-Jabbar in the next few games. When talking about official records, such as all-time scoring leaders, the NBA sticks solely to regular-season games and doesn’t add playoff totals to the mix. Add Abdul-Jabbar’s playoff games to his total, and he scored 44,149 points.

James scored 33 on Tuesday in a win over the Nets, pushing his overall total — including playoffs — to 44,045 points. Another three, four, maybe five games should be all it will take for James to have scored more points than anyone in NBA history. It won’t be the official record. But on at least one list, James will be No. 1 in scoring very soon.

“He has a skillset that already has been well documented ... a pass-first guy who can lead the league in scoring," said Miami coach Erik Spoelstra, James’ former coach for four NBA Finals trips and two championships with the Heat.

Ah, the passing. Don't overlook that.

James is now 77 assists shy of 10,000 in his career. He’s about to be the first triple-quintuple player in NBA history, the first with at least 10,000 points, 10,000 rebounds and 10,000 assists. He hit the rebound milestone last week; he’ll probably hit the assist milestone sometime between now and the All-Star break. He could have had the scoring record long ago if he had turned down more of those assist opportunities.

While there may not have been intent, technically, he’s been chasing them since Day 1.

He was tied for 1,157th on the NBA’s all-time scoring list after his rookie season. Moved into the top 500 after three seasons. Cracked the top 250 by Year 5. Was in the top 100 by the eighth season, the top 50 a year after that. By Year 14, he was in the top 10. And Tuesday’s game in Brooklyn marked exactly two years since he moved into the No. 3 spot on the all-time scoring list by passing Kobe Bryant.

“Continuing to move the game forward (at)KingJames. Much respect my brother,” Bryant tweeted that night, the final one ever sent from his account.

Bryant died the next day in the helicopter crash in which eight others, including his daughter Gianna, also perished. Bryant played in 1,346 regular-season games. James played in his 1,346th on Tuesday.

James is the only one on all four.

And this climb up the charts isn’t coming with James, now 37 and in his 19th season, sputtering to the career finish line. He’s putting up MVP-type numbers, at times single-handedly trying to keep the Lakers afloat while they sputtered around the .500 mark and waited for Anthony Davis to return to the lineup. Davis made his comeback Tuesday, after missing 19 of the Lakers' last 21 games with a knee problem.

James' 33 points on Tuesday also was his 18th consecutive game with at least 25. Nobody, this late in a career, has ever come close to doing that. Bryant had a 17-game streak in Year 17.

James is making it look easy.

“I don’t need to score 30 a night, but I’m in one of the best zones offensively I’ve been in in my career,” James said. “And I don’t plan on stopping. That’s just how I feel. I feel fantastic.”

Who is the highest paid player on every NBA team?

“Pomp and Circumstance” played as Stephen Curry stepped up to the podium after practice as he prepared with the Golden State Warriors for the Western Conference Finals.A playful, makeshift moment to honor his new status as college graduate.Curry completed his Bachelor of Arts degree in sociology to join the Davidson College class of 2022, even if he couldn’t be there to walk for the commencement ceremony Sunday but watched on video.He fulfilled a promise to mother Sonya that he would receive his degree. She had been bragging for the past decade that two of her children — son Seth and daughter Sydel — had college degrees.

Time for the NBA draft lottery, where some team will get a nice reward for a miserable season.

Bob Lanier, the left-handed big man who muscled up beside the likes of Kareem Abdul-Jabbar as one of the NBA's top players of the 1970s, died Tuesday.

Orlando Magic president of basketball operations Jeff Weltman was supposed to be at the podium for the NBA draft lottery.

The Orlando Magic won the NBA draft lottery and landed the No. 1 overall pick for the first time since they got Dwight Howard nearly two decades ago. Orlando finished with the worst record in the Eastern Conference at 22-60 and missed the playoffs for the  eighth time in 10 years. But they got a huge win in the lottery, with the top pick for the first time since taking Howard in 2004. Duke’s Paolo Banchero, Gonzaga’s Chet Holmgren, Purdue’s Jaden Ivey and Auburn’s Jabari Smith are widely considered the most likely candidates to be taken first. The draft is June 23 in New York. Oklahoma City got the second pick, followed by Houston and Sacramento.

A Louisville woman has filed for an emergency protective order against Cleveland Cavaliers guard Rajon Rondo and alleges the former Kentucky star brandished a gun and threatened her life. News outlets report the woman alleges Rondo “became enraged” last week during a confrontation and filed for the EPO on Friday in Jefferson County Family Court. She says in the EPO that Rondo then went outside and knocked over the trash cans, stomped on the landscaping lights and drove his car onto the lawn. Rondo returned and beat on a window with a gun before giving the gun to former Louisville Metro Police interim chief Yvette Gentry and leaving.

The Phoenix Suns are still struggling to explain the aftermath of a 33-point loss to the Dallas Mavericks on their home floor in Game 7 of the Western Conference semifinals. The lopsided loss overshadowed a brilliant regular season for the Suns, who won a franchise-record 64 games during the regular season. Most of the team's nucleus is under contract for next season, with the notable exception of starting center Deandre Ayton. The big man's future is among many questions the Suns face in the offseason.

Stephen Curry had 21 points and a game-high 12 rebounds, Golden State’s defense held Luka Doncic in check, and the Warriors beat the Dallas Mavericks 112-87 for a 1-0 lead in the Western Conference finals. Doncic scored 20 points but shot just 6 for 18 and 3 of 10 from deep. He made back-to-back 3-pointers late in the first half to get his team within 54-45 at the break, but Curry and Klay Thompson helped the Warriors pull away in the second half. Game 2 in the best-of-seven series is Friday night at Chase Center.

US Soccer reaches equal pay agreement for men and women

US Soccer reaches equal pay agreement for men and women 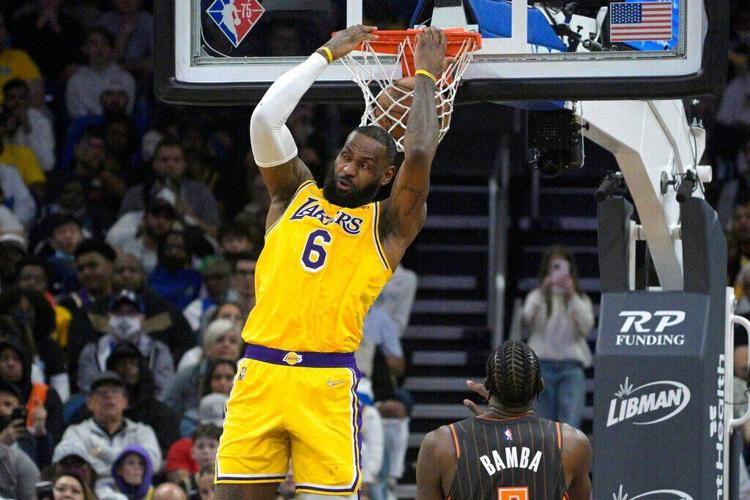 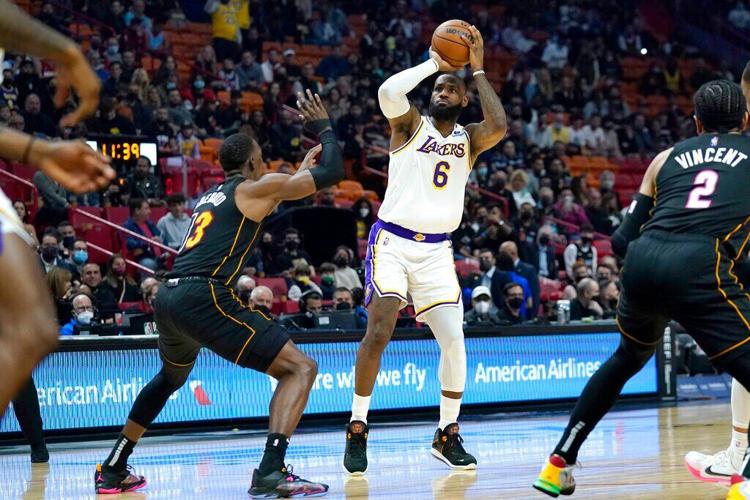 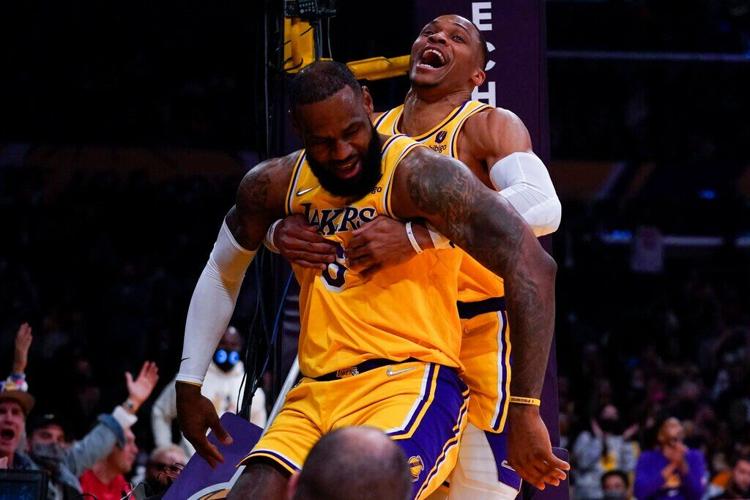 Los Angeles Lakers forward LeBron James (6) is helped off the floor by guard Russell Westbrook, right, during the first half of an NBA basketball game against the Indiana Pacers in Los Angeles, Wednesday, Jan. 19, 2022. (AP Photo/Ashley Landis)