The Kansas Jayhawks earned the top seed in the Midwest Region on Sunday following a 28-6 season that culminated with a Big 12 tournament victory over Texas Tech on Saturday.

It was KU’s first conference tournament title since 2018. That was also the last time Bill Self’s squad advanced to the Final Four.

In a season where no team has seized control, the Jayhawks are a +1400 choice to win the national championship at DraftKings. This despite the fact they suffered a pair of March regular-season losses before closing with five straight wins.

Why is Kansas still so highly regarded? It starts with senior guard Ochai Agbaji. He eschewed the NBA Draft last summer and his 19.8 points per game pace the Jayhawks. He is a 40.3% shooter from 3-point distance, a great equalizer in March.

Contenders who could challenge Kansas in the Midwest out of Chicago include No. 2 Auburn (+1200 to win the championship), longshot No. 3 Wisconsin (+10000) and red-hot No. 5 Iowa (+2200). Auburn guards K.D. Johnson and Wendell Green can be alternately captivating or confounding. The Badgers' Johnny Davis can put a team on his back. And the Hawkeyes? Holy heater. More on Fran McCaffery's squad below. 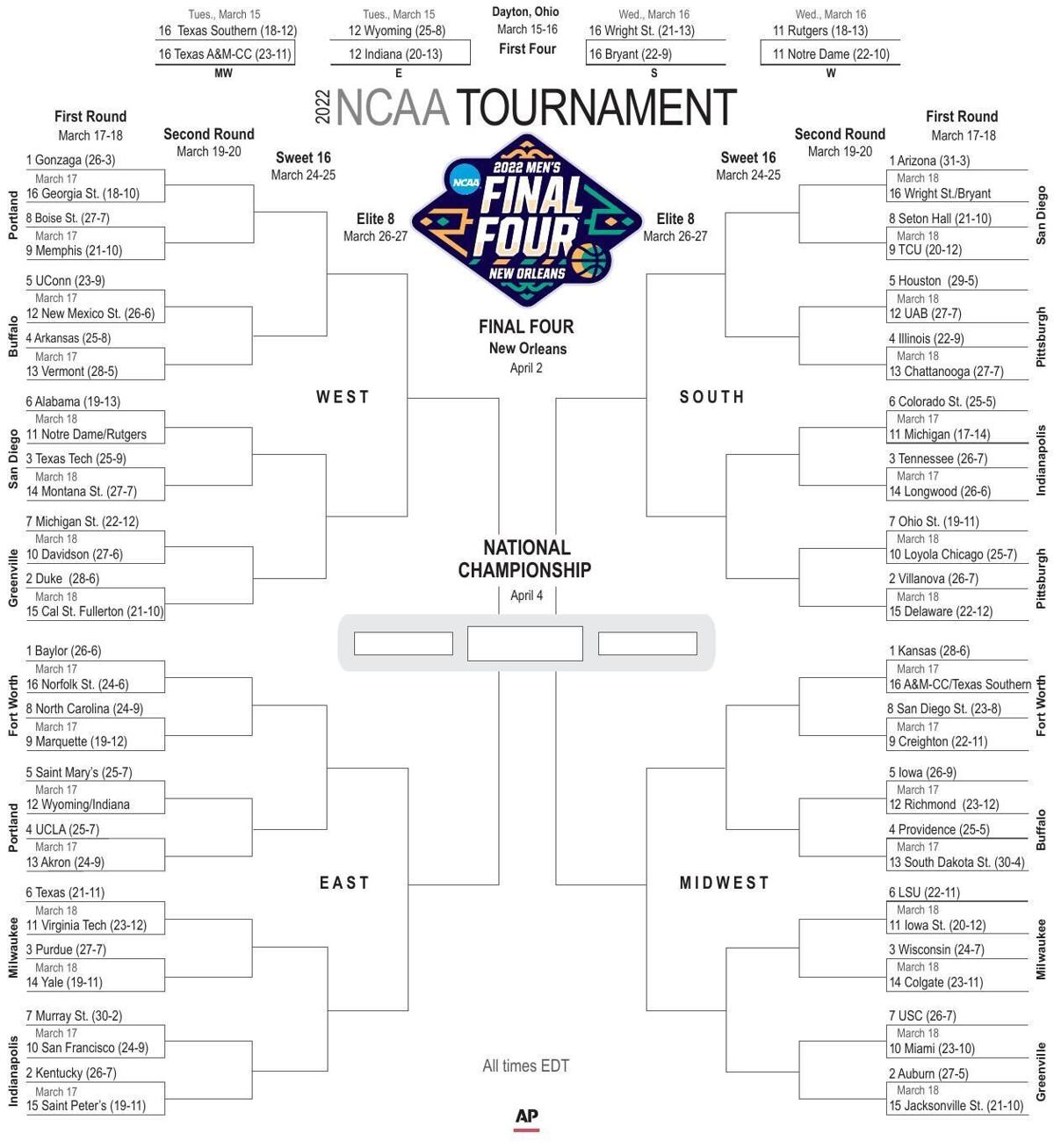 FrontPageBets breaks down what you need to know about the Midwest Region.

And by interesting, I mean slow. Count Creighton among the teams finding winning form at the right time. The Bluejays (22-11) ripped Marquette in their Big East tournament opener, then destroyed No. 1 seed Providence by 27 points to earn a date with Villanova in the semifinals. They had their chances against the Wildcats, but fell 54-48 in a defensive slugfest. Their pace of play will look familiar to the Aztecs (23-8) who lost the MWC championship game to Boise State, 53-52. This game will be lucky to see the winner score in the 60s. Creighton 7-foot sophomore center Ryan Kalkbrenner (7.6 rebounds per game, 2,6 blocks) will be the difference.

The Friars (25-5) won the Big East regular-season crown, despite losing twice to Villanova. They had three games cancelled and played only 17 of 20 conference games. They were throttled in the Big East tournament by Creighton 85-58, losing two of their last three. In tournament play, where consistency is vital, they are headed in the wrong direction.

The Hawkeyes (26-9) have won nine of their last 10 games, storming to the Big Ten tournament crown and looking like a team on a mission. Their lone loss in the stretch came by a bucket at Illinois. Sophomore forward and player of the year candidate Keegan Murray averages 23.7 points, 6.6 rebounds and shoots 56% from the field. Senior guard Jordan Bohannon and sophomore forward Patrick McCaffery are a great supporting cast.

The Cyclones (20-12) match up with No. 6 LSU (22-11) in their first-round game. With Tigers coach Will Wade fired on Saturday in the wake of a prolonged pay-for-play investigation that involved an FBI wiretap, you have to assume LSU will be distracted. Kevin Nickelberry is interim coach. Look for Iowa State senior guard Izaiah Brockington (17.2 points, 7.1 rebounds) to take this game over and send LSU back to Baton Rouge again holding the bag.

Momentum matters in March (and April). So does the type of senior leadership that a guy like Bohannon brings. His clutch, banked, buzzer-beating 3-pointer to foil Indiana in the Big Ten semis is the stuff of legend. With Murray as the driving force this team goes where Iowa hasn't been since 1980 under Lute Olson.

Baylor (26-6) is ranked No. 3 overall in the country and did enough in the regular season to hold down one of the top four national seeds, joining fellow Big 12 member Kansas, Gonzaga and Arizona.

Gonzaga collected the top seed in the West, and for the tournament overall, posting a 26-3 r…

It's been a season to remember for Arizona.

Gambling problem? There is help. Call 1-800-522-4700 or visit the National Council on Problem Gambling for help.

Gerry Ahern is senior content editor for FrontPageBets. A 35-year veteran sports editor and digital media executive, he has led coverage of the biggest events in sports, from Super Bowls, to Final Fours, to Olympics, to the Masters.

This year's NCAA Tournament might be the hardest one to predict in a long time. Parity from top to bottom, no real dominant team and enough Cinderella's looking for lost glass slippers could turn this year's Big Dance into a mosh pit. And we here at FrontPageBets are here for it.