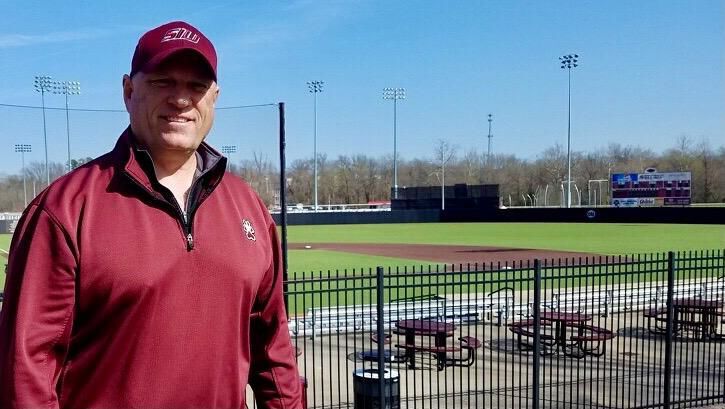 Here, former SIU pitcher Shane Gooden pays a visit to Itchy Jones Field. He remains a big fan of the baseball program and has struck up a friendship with new Saluki head coach Lance Rhodes. 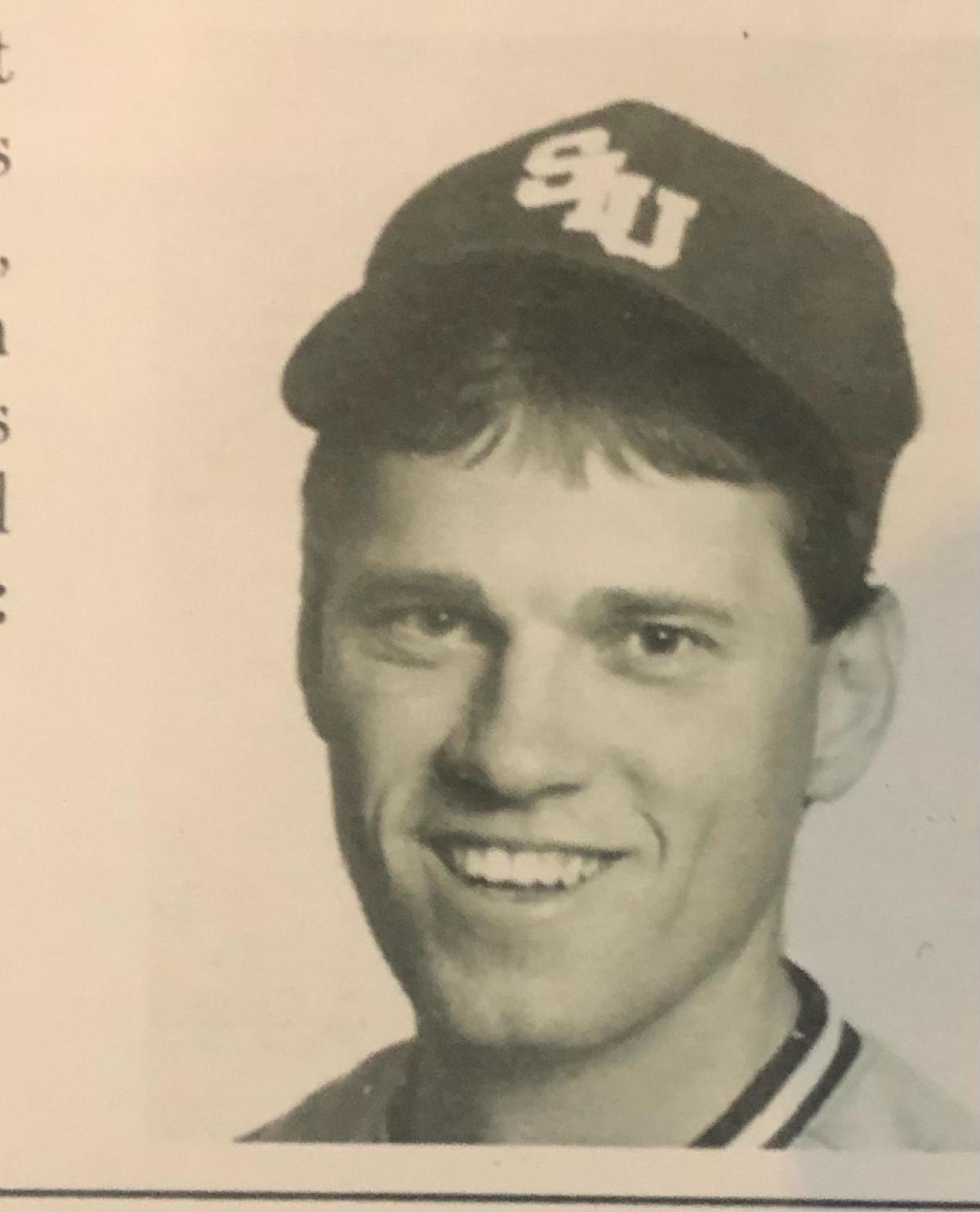 Shane Gooden of Herrin pitched for the Salukis from 1986-89 and enjoyed a successful career mostly as a reliever.

HERRIN — Baseball rarely gets the attention that football and basketball do here in Southern Illinois.

But now that the Salukis have jumped out to a 28-12 overall record this spring, more and more people are beginning to take notice.

Count Herrin's Shane Gooden as one.

"I think it's a phenomenal start," said Gooden, who pitched for the Dawgs from 1986 through 1989. "Lance (new SIU head coach Rhodes) has done a good job of getting the right kids together playing hard. When you have the right chemistry, you can be successful. And it says a lot about Lance and what he's been able to bring to the Saluki baseball program."

A 1985 Herrin High School grad, Gooden was recruited to SIU by Hall of Fame coach Richard "Itchy" Jones, also a Herrin native. "I was actually brought in as a shortstop, centerfielder and pitcher, but after pitching well in relief against No. 5-ranked Maine my freshman year, I pretty much became a pitcher only... aside from a few pinch-running opportunities here and there."

As a team, SIU won 141 games and dropped 103 in Gooden's four years. The best team, he said, was his freshman year (39-22) when SIU won the Missouri Valley Conference title and advanced to the NCAA Regional in Texas as an at-large representative.

"I remember that in order to win the conference we had to sweep four games from Indiana State, and we did," Gooden said.

The Salukis followed up the next three years with records of 36-21, 40-22 and 26-38, but fell short of winning any additional league titles.

"The home crowds were huge back then. It was always fun to see the hill packed," he said.

A shoulder injury sustained while lifting weights prior to his senior year impacted Gooden's ability to pitch as effectively in his last season.

"When healthy, I had one of those kind of arms that it didn't take me long to warm up. That's probably why I was used so much in the bullpen," Gooden said. "Sometimes, I was used as a long reliever and sometimes I was the closer. There were other occasions when I started a middle-of-the-week game. Whatever Itchy needed. I was glad to help. I didn't mind being that grunt to eat up innings."

Gooden said he routinely faced powerhouse league members Creighton and Wichita State, the latter being one of the premier programs in the country at the time.

"We played against a lot of talented teams and we had a pretty talented team, too," he said. "I played with guys like Steve Finley, Sean Bergman, Dave Rona, Derek Shelton (now the manager of the Pittsburgh Pirates), Dan Hartlieb, Joe Hall, Doug Shields, Tim Davis, and Kurt Endebrock to name a few, as well as my former Herrin teammate, Ricky Damico.

"We had some good teams and Itchy was a great coach to play for," Gooden said. "He knew how to motivate a player. He was also a friend and even father figure at times when players needed him to be. That's what made him so successful.

Gooden added that Jones wanted all of his players to be successful students.

"Work hard in class and play hard between the lines," Gooden said. "Itchy would find a way to push you to get the best out of you."

Gooden said Rhodes reached out to him and other SIU baseball alumni.

"Lance and I have become pretty good friends the last few months. I think he's a class act and a very charismatic guy. He's trying to build a winning program here and he's well on his way."

PRE SIU: Gooden was a two-sport standout athlete at Herrin. In addition to shining on the ball diamond, he was one of the area's premier guards in basketball. He scored over 1,000 career points and was named South Seven All-Conference and All-South multiple times in both sports. He worked his way into the varsity lineup his freshman year and never looked back.

Although the Herrin basketball team never won more than 17 games in any one season from 1982 through 1985, the Tigers were a handful for opponents.

"We won the Pyramid Tournament three times and I was MVP all three years," Gooden said. "I had some fantastic teammates, too, guys like Ron Reed, Steve Kerr, Curtis Wharton, Doug Hammann, Jim Cislaghi, David Revelle, Jeff Leighton, Kevin Lawwill, Denver Powers, David Vaughn, Brian Beltz, Jeff Leighton and Anthony Goodrum, who was a three-year starter for us. We had a lot of fun together."

Gooden said his fondest memories playing baseball in Herrin were probably the battles the Tigers had with Jay Thompson's Harrisburg ballclubs.

"They were such a good program and the games we had with them were great battles. I remember they beat me 2-1 in the regional at Salem my senior year. I gave up a two-run homer and that proved to be the difference."

Gooden was named Southern Illinoisan Player of the year his senior year in 1985.

"There were some Major League teams that were interested in drafting me out of high school — St. Louis, Kansas City, Philadelphia and Boston, but I signed early with SIU because I always wanted to play for Itchy."

POST SIU: Gooden got into insurance sales in 1993 and has been with State Farm for 20 years as a financial service representative. He transferred to a Harrisburg office 12 years ago.

In his spare time, he officiates basketball and baseball. He has also served as a pitching coach for the Tigers the last six years.

Gooden and his wife, Julie (Kneale) have been married 32 years. The couple have three boys and one girl. The eldest, Zach, is a State Farm agent in Du Quoin. Tyler handles fire claims for State Farm and works out of his home in Herrin. Conner works for the City of Herrin and Gracie is an eighth-grader at the middle school. There is also one granddaughter, Whitley, and the Goodens are now expecting a grandson.

Here, former SIU pitcher Shane Gooden pays a visit to Itchy Jones Field. He remains a big fan of the baseball program and has struck up a friendship with new Saluki head coach Lance Rhodes.

Shane Gooden of Herrin pitched for the Salukis from 1986-89 and enjoyed a successful career mostly as a reliever.