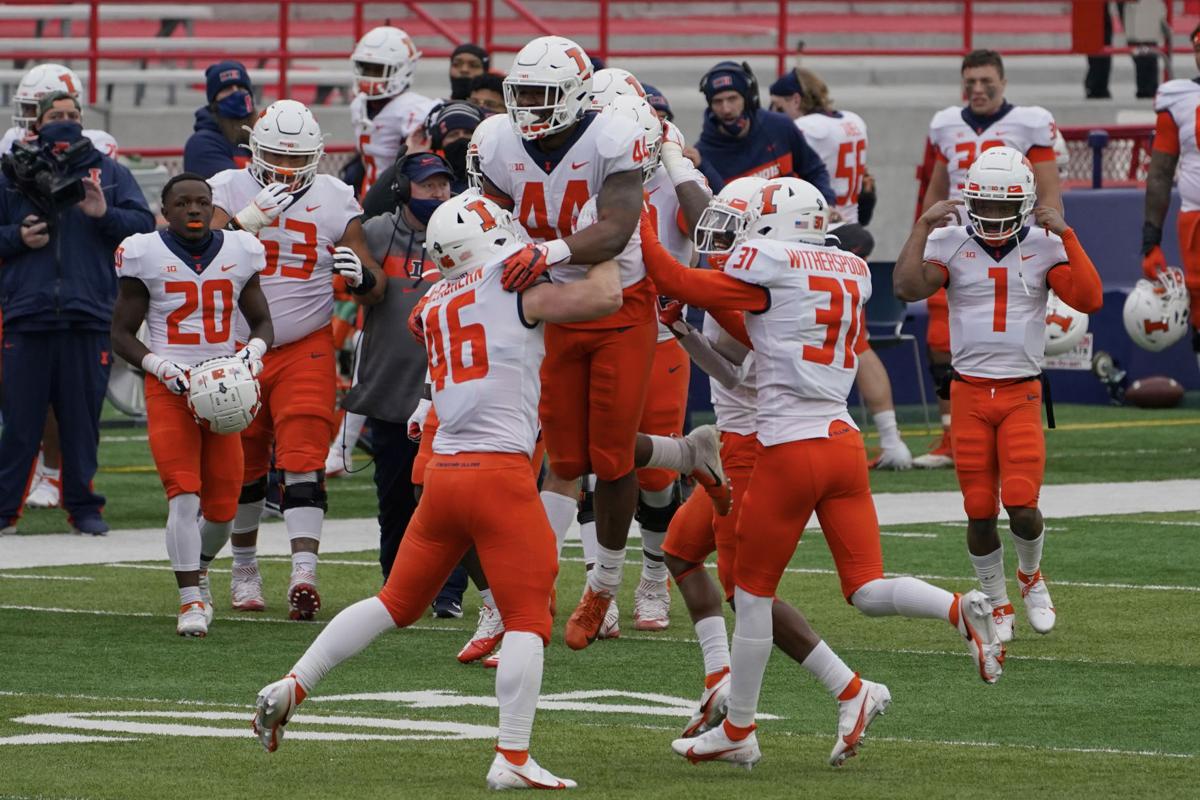 Illinois linebacker Tarique Barnes (44) celebrates with teammates after he intercepted a pass by Nebraska quarterback Luke McCaffrey during the first half of an NCAA football game in Lincoln, Nebraska on Saturday.

Illinois running back Chase Brown (2) runs past Nebraska linebacker JoJo Domann (13) during the first half of an NCAA college football game in Lincoln, Nebraska on Saturday.

LINCOLN, Neb. — For most teams that come into Memorial Stadium, beating Nebraska doesn't mean as much as it used to considering the Cornhuskers' fall from the upper echelon of college football the last two decades.

You couldn't tell that to Illinois coach Lovie Smith after his team left Lincoln with a 41-23 win Saturday.

"You can imagine what our locker room was like," Smith said. "I'm told we haven't won in Lincoln since 1924 when Red Grange played. Whenever something like that happens, it's a big deal."

Brandon Peters threw for one touchdown and ran for another in his first game in nearly a month, Illinois had two rushers go over 100 yards, and the Illini beat the turnover-plagued Huskers for their second straight win.

The Cornhuskers won at Illinois last year despite committing four turnovers. They couldn't survive five, though.

"I didn't see this coming," Nebraska coach Scott Frost said. "I was embarrassed by our level of execution in all three phases. I didn't think we had the juice we had last week. It's almost like our team thought you win one game, you're good. That's not how it works."

Luke McCaffrey, making his second start at quarterback, committed the first of his four turnovers on the first play from scrimmage. Wan'Dale Robinson fumbled as the Huskers (1-3, 1-3 Big Ten) tried to come back in the second half.

Illinois (2-3, 2-3) led 28-10 after two quarters, their most first-half points against a conference opponent in 10 years, and won its second road game in as many weeks.

"Winning is always a great feeling," Peters said. "Today I think the turning point was getting that turnover real early in the game. That gave us a lot of momentum moving forward, and from that point we didn't stop."

Peters, who had been out since Oct. 24 because of a COVID-19 outbreak on the team, showed no rust in leading a balanced Illini offense that had 285 yards rushing and 205 passing.

Nebraska entered the game as a 16-point favorite and ran into trouble immediately.

McCaffrey ran 4 yards on the first snap and flung the ball into the turf — what was ruled a lateral instead of an illegal forward pass — and Illini linebacker Jake Hansen recovered at the 21.

Chase Brown, who ran for 110 yards on 26 carries, scored the first of his two touchdowns three plays later.

Peters threw to Josh Imatorbhebhe for a 28-yard touchdown for a 21-7 lead after Tarique Barnes intercepted a scrambling McCaffrey's desperation throw along the sideline.

Illinois added to the lead on Mike Epstein's 1-yard run two plays after he broke a 58-yarder down the sideline. Epstein finished with 113 yards on 13 carries.

McCaffrey ran 26 times for 122 yards, both career highs, and threw for two touchdowns. But he couldn't overcome all those turnovers.

"The number one thing is you can't turn the ball over," he said. "I did that too many times today. That's why the scoreboard looked the way it did."

Illinois: Smith's defense thrives on turnovers, and the Illini played "Lovie Ball" to the hilt with five takeaways. That gives them 13 for the season.

Nebraska: The Huskers flopped a week after beating Penn State for their first win. There are some serious growing pains continuing to happen in year three of Frost.

Frost said the prognosis appeared good for linebacker Collin Miller, who was taken off the field on a stretcher with about 12 minutes to play. He appeared to have been hurt making a tackle.

Medical personnel tended to Miller for several minutes near the south end zone as players from both teams took a knee. He was strapped to a backboard and taken out of the stadium.

Nebraska officials like to boast that they led the charge to bringing back football after the Big Ten originally decided to push the season back to spring.

Minutes after the game, the Illinois athletic department expressed its gratitude.

"Good game Nebraska. Thanks for bringing back B1G football," the department tweeted on its official account.

SHOULD I PUNT OR NOT?

Illinois punter Blake Hayes made the most entertaining play of the game when he took off running on a fourth-and-8 play from his own 31 in the third quarter.

As Hayes started take his step to punt, he stopped, saw open field to his left and began running. He stutter-stepped once or twice before reaching the sideline for a 14-yard gain and a first down.

Illinois hosts No. 3 Ohio State on Nov. 28. The Illini have lost nine straight in the series.

Nebraska visits Iowa on Nov. 27. The Huskers have dropped five straight to the Hawkeyes.

No. 3 Ohio State cancels game at Illinois after virus spike

No. 3 Ohio State’s game at Illinois on Saturday has been canceled because the Buckeyes have had a spike of COVID-19 cases this week, leaving t…

Minnesota cancels Saturday's game against Wisconsin because of COVID-19

For just the second time in 130 years, Minnesota will not face Wisconsin in football.

No. 4 Clemson at Florida State postponed hours before start

The game between No. 4 Clemson and Florida State was postponed hours before kickoff Saturday when medical personnel from both schools could no…

No. 3 Ohio State cancels game at Illinois after virus spike

No. 3 Ohio State’s game at Illinois on Saturday has been canceled because the Buckeyes have had a spike of COVID-19 cases this week, leaving t…

Illinois linebacker Tarique Barnes (44) celebrates with teammates after he intercepted a pass by Nebraska quarterback Luke McCaffrey during the first half of an NCAA football game in Lincoln, Nebraska on Saturday.

Illinois running back Chase Brown (2) runs past Nebraska linebacker JoJo Domann (13) during the first half of an NCAA college football game in Lincoln, Nebraska on Saturday.