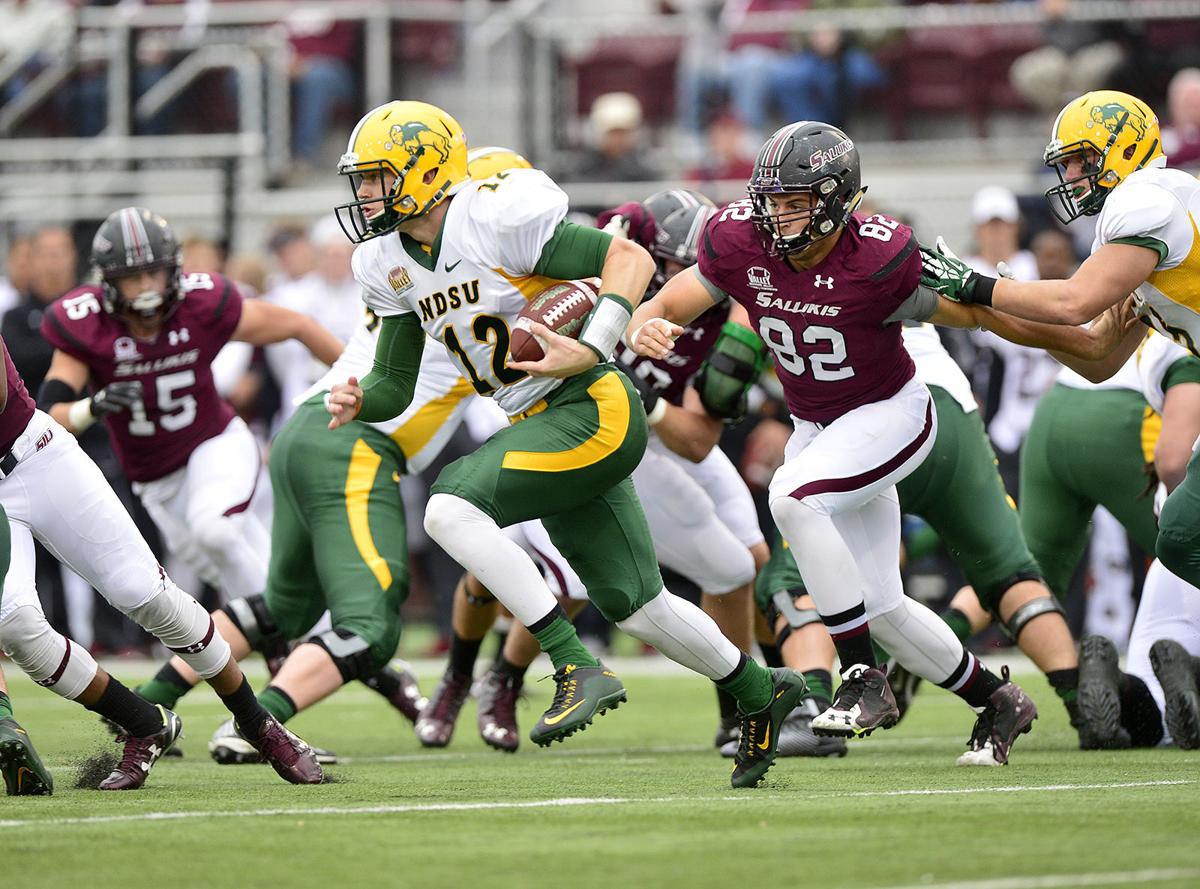 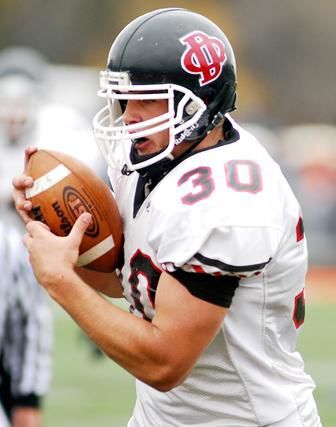 Du Quoin’s Dalton Morgan hauls in a pass during the Indians’ win over Carterville in 2008.

Du Quoin’s Brandon Williams and Dalton Morgan were once formidable forces on the football field — but rarely at the same time.

Williams, 26, has always looked up to his older brother Morgan, 29. From their days playing sports in the backyard together, to playing under the legendary status of Al Martin on Van Metre Field, the common bond was always football.

Morgan played tight end and defensive end for the Indians before graduating in 2009, while Williams lined up at the same positions, including fullback, before finishing high school in 2012. The two brothers now work in the healthcare system but still remember the lessons learned from Coach Martin.

“At that time Coach Martin had been coaching for 30 to 40 years, so you knew you’re getting taught by the best,” said Williams. “I believe his record speaks for himself.”

“Playing underneath Coach Martin was great,” said Morgan. “I had two uncles that played for him. Growing up in Du Quoin, everyone, including me and my friends, loved football.”

Morgan capped off his 2009 senior season with a second-place finish at state when Du Quoin finished 12-2 that year. That same year he played on the Indians basketball regional championship team that won during his junior year.

Morgan shared a story of a conversation he and his teammates had in the locker room after a loss to Herrin in his senior football season.

“We always talked about going to state, especially in our senior year,” he said. “We always had a great group of teammates and friends. There was a moment that season where we lost a close game to Herrin, and the next day we held a players-only meeting. In the locker room we talked about what we could do better and laid down the groundwork for the rest of the season.”

That year Du Quoin lost to Carthage (Illini West) in the championship game, 21-14. It wasn’t the ending Morgan and his teammates imagined, but there was still a lesson learned from that season.

“Anytime we faced adversity after that, we overcame it.”

Morgan showed that same mentality by beating a mystery illness when playing football at SIU in 2013. Seven years later, he still keeps up with his favorite Chicago sports teams during his down time, while working with cardiac patients in the ICU of a 20-month program at Barnes-Jewish Hospital.

While living in Du Quoin, Morgan worked the past four years at Memorial Hospital of Carbondale and is on track to graduate from Barnes in December of 2021. Helping those in need is another important quality Morgan and his brother share.

“I went in kind of blind when I started working at Carbondale’s hospital in 2016,” said Morgan. “I really came to enjoy the aspect of getting to know patients and their families. Helping a patient who is sick and vulnerable to getting healthy and out of the hospital shows the good outcomes of it all.”

Williams joined SIU’s football program as a freshman when Morgan was a senior. Outside of that, the four-year age difference kept the two brothers from ever playing on the field at the same time. After college, Williams decided to drive down to Atlanta to test out his NFL dream with the Falcons.

After three weeks of preseason games, he was let go once Atlanta’s organization cut its roster down from 90 to 75. Williams went on to try out for the Carolina Panthers in May of 2017 after playing in Canada for a month, but finally decided it was time to give up football.

Williams put his biology degree from SIU to use to finish an accelerated nursing program at Olivet Nazarene University in December of 2018. After working the trauma surgical floor at Barnes-Jewish Hospital, he began his first travel assignment this past July in Greenville, South Carolina.

“I enjoy the trauma surgical aspect,” Williams said before his November assignment in Billings, Montana. “Injuries can happen to anyone. People that are perfectly healthy get into car accidents and before they’re in the hospital, they’re doing normal things everyday like everyone else.”

Williams wanted to become a doctor or pediatrician based on his mother Karen Williams’ job as an emergency room nurse at Marshall Browning Hospital. It seems what the two brothers have learned from their mother has brought them together as they continue to be formidable forces — only this time sporting a different kind of protective face mask.

Illinois appears poised to make a statement in the Big Ten. And coach Lovie Smith sees no reason why his team can't.

Illinois football to open season on Friday, Oct. 23 at No. 16 Wisconsin

For the third straight schedule release, the Illinois football team is scheduled to open the season under the lights.

Messages include Black Lives Matter, I Fight Against Racism, Together, Equality, or United.

Indiana's gamble pays off in OT upset over No. 8 Penn State

Matt Calkins: Pac-12 doesn't deserve the benefit of the doubt when it comes to the College Football Playoff

Earlier in the month, Washington coach Jimmy Lake was asked about the prospect of getting into the College Football Playoff. Wisely, he refused the bait.

Messages include Black Lives Matter, I Fight Against Racism, Together, Equality, or United.

Du Quoin’s Dalton Morgan hauls in a pass during the Indians’ win over Carterville in 2008.