CHAMPAIGN — The first time Kofi Cockburn, Trent Frazier and Da’Monte Williams were together for a game at the State Farm Center was not a program highlight.

Cockburn was on his official visit as a top-50 recruit looking on as Frazier and Williams both played in the team’s overtime loss at home to mid-major Florida Atlantic. It was close to rock bottom during a season of a program-record 21 losses.

“It would have swayed a lot of people’s decision but for me it was motivation,” Cockburn said. “I like taking on a challenge and changing something and making an impact on something.”

Cockburn committed a week later. Williams and Frazier stuck around while others transferred. They all believed in the program when it was at its lowest point. They were going to right the ship.

“That was my initial reason why I was coming here, me and Trent, we talked about it,” Williams said. “When guys wanted their release, to take it back a long time from now, that was just our whole main focus — just get Illinois basketball back to how it used to be.”

Sunday night, they did just that. They were all together again at the State Farm Center a little over three years after that visit, for the last time as teammates, with a Big Ten trophy in front of them. The program’s first in nearly two decades.

The trophy signaled a climb that seemed unthinkable when Brad Underwood took the job after the 2016-17 season — especially after he had 39 losses in his first two years.

“Five years ago I didn't think we were ever going to get out of the Wednesday game (of the Big Ten Tournament),” Underwood said. “We weren't even close.”

But the climb happened. The team won 21 games in Cockburn’s freshman year and showed promise.

“We were still rebuilding and trying to figure things out,” Frazier said. “As time went on, we continued to get culture guys, better players and guys that bought into what Coach Underwood wanted. To stick with it through the ups and downs made it worth it.”

Last year the Illini returned to prominence on the national stage, but a winning-percentage tiebreaker kept them from a regular season title and an upset loss quickly ended those NCAA Tournament hopes.

This win gives the program that tangible and permanent trophy to look back on. A banner will be hung in the rafters, and the raucous court-storming and net-cutting will be the memory fans can look back to as the night Illinois basketball was finally back on top — for the first time since 2005.

“Getting a banner, that’s really special,” Cockburn said. “It’s been a while since an Illinois team has done that.”

The final day that gave them those moments was just a symbol of that daunting climb.

Brad Underwood was in his recliner checking in on scores before nodding off after seeing Wisconsin was up 10 over cellar-dwelling Nebraska, which was last in the conference going into the day. The Badgers would hold on to their Big Ten title.

Then Illinois native Alonzo Verge entered the picture, dragging the Cornhuskers to a comeback win over the No. 10 Badgers. Underwood’s phone blew up while Cockburn and the players were celebrating at the new life their title chances were given.

“We manifested that,” Cockburn said.

That gave Illinois a simple directive — win against Iowa and you’re co-champions of the Big Ten. The Hawkeyes nearly ruined the script with a run of 12 straight scores that pushed them to a 15-point lead over the Illini.

Again, Illinois was led by its experienced trio and didn’t roll over. Cockburn had a dominant 21 and 14 to will the team back from the deficit. Williams contested Iowa’s last-gasp 3 to force a miss. Frazier dribbled out the clock with his finger in the air before all hell broke loose.

“I almost passed out,” Frazier said. “It was too hot.”

“We always find each other,” Williams said.

Now, Frazier and Williams will have to say goodbye to the program after five years and finally break apart. Cockburn has a decision to make on his NBA future. It’s possible all three are gone for good after this season.

They got the championship they craved, and will go out having dragged the program back on top and in a place that is dramatically better than where they found it.

Illinois had multiple recruits, most notably 2024 commit Morez Johnson and four-star 2022 signee Ty Rogers, in attendance. At this juncture, Illinois will be more appealing to top recruits and it will be an easier sell to guys than it was to Cockburn.

“Well if they didn't enjoy that they can go someplace else and we're going to kick their ass,” Underwood said.

Now, Illinois looks toward the NCAA Tournament. It won’t have the same seeding it did last season, but it has a chance to make some noise. The program also has the task of staying at the top of the conference’s summit with Underwood and with a new cast next season.

Now, Illinois is a program with expectations.

“These trophy presentations aren’t over,” Underwood told the crowd after the game. “We’re bringing a few more back to Champaign.

Josh Whitman discussed facility improvements, why hockey wasn't financially feasible for Illinois in the current term and other topics at his annual media roundtable.

Zacharie Perrin, a 17-year old from France, will likely be the last piece added to the Illini's roster ahead of the 2022-23 season.

Watch now: St. Rita's new big three are an Illinois recruiting priority for the Class of 2024

Illinois commit Morez Johnson and high school teammates James Brown and Nojus Indrusaitis are all targets for the Illini in the class of 2024.

Karol Kahrs built the women's athletic department at Illinois during her 30-year tenure at Illinois. Her work post Title-IX is still appreciated in Champaign.

Kofi Cockburn signed with the Utah Jazz early Friday morning after an impressive three-year career with the Illini.

A class of 15 former Illini coaches and athletes will be inducted to the department's hall of fame in September.

Josh Whitman got a contract extension through 2028, an endorsment of his tenure so far. After multiple hires, the next step for hm and the department is keeping coaches around long term.

Illinois football has gotten eight commitments in the past three weeks while closing quickly after players make their official visits. 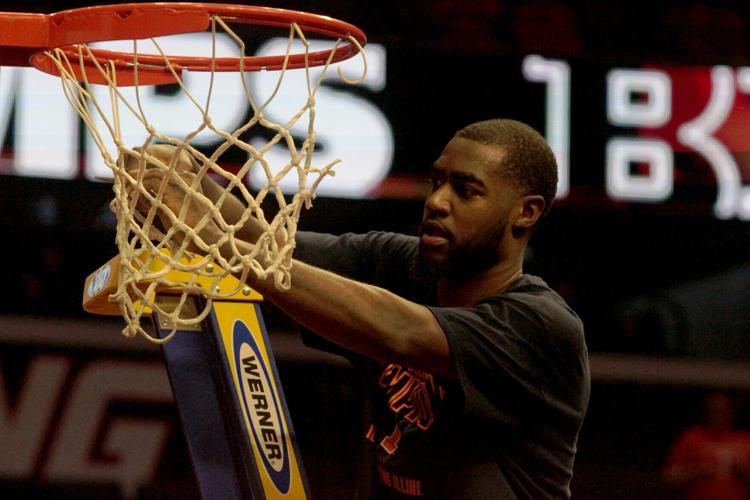 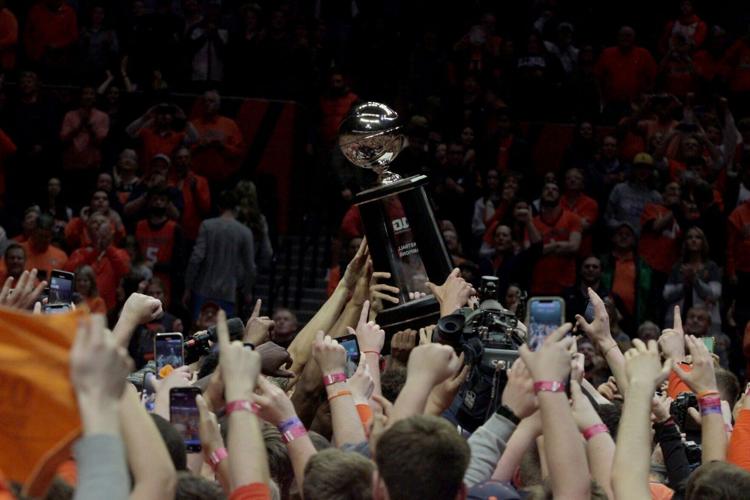 Fans storm the court with the Big Ten trophy after Illinois' 74-72 win over Iowa. 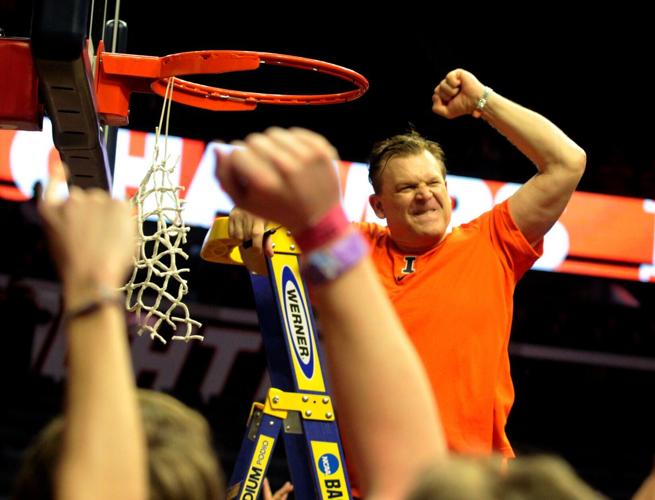 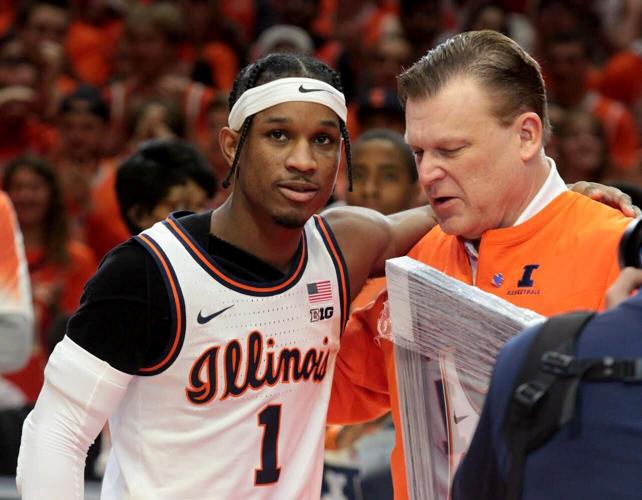 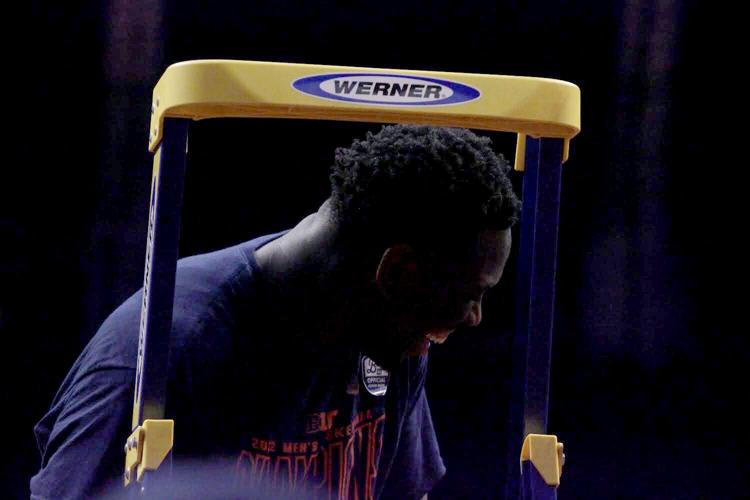 Kofi Cockburn climbs up the latter to cut down the nets after Illinois won a share of the Big Ten title Sunday.