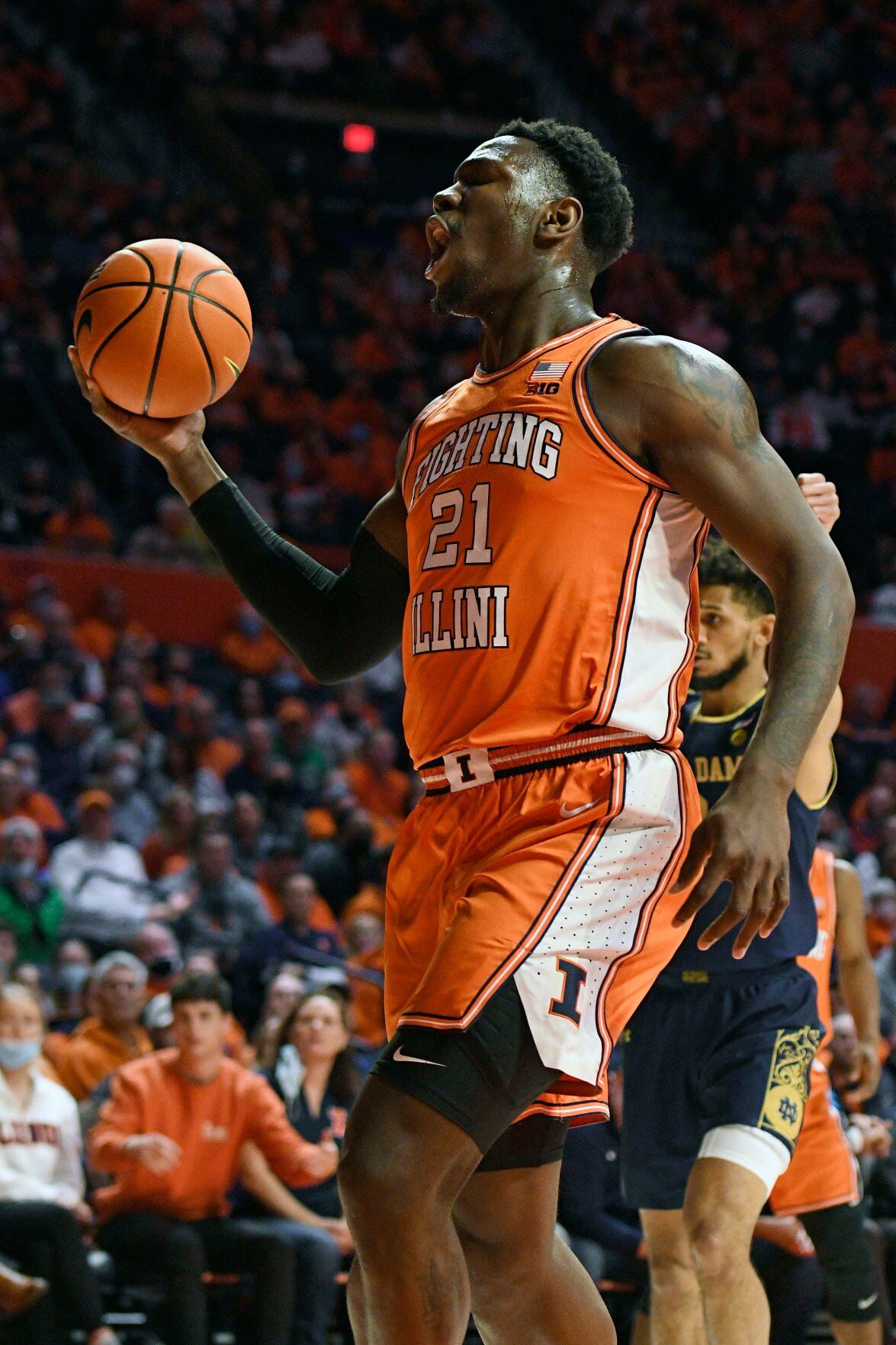 Illinois' Kofi Cockburn reacts to an official's call during the first half against Notre Dame on Monday in Champaign. 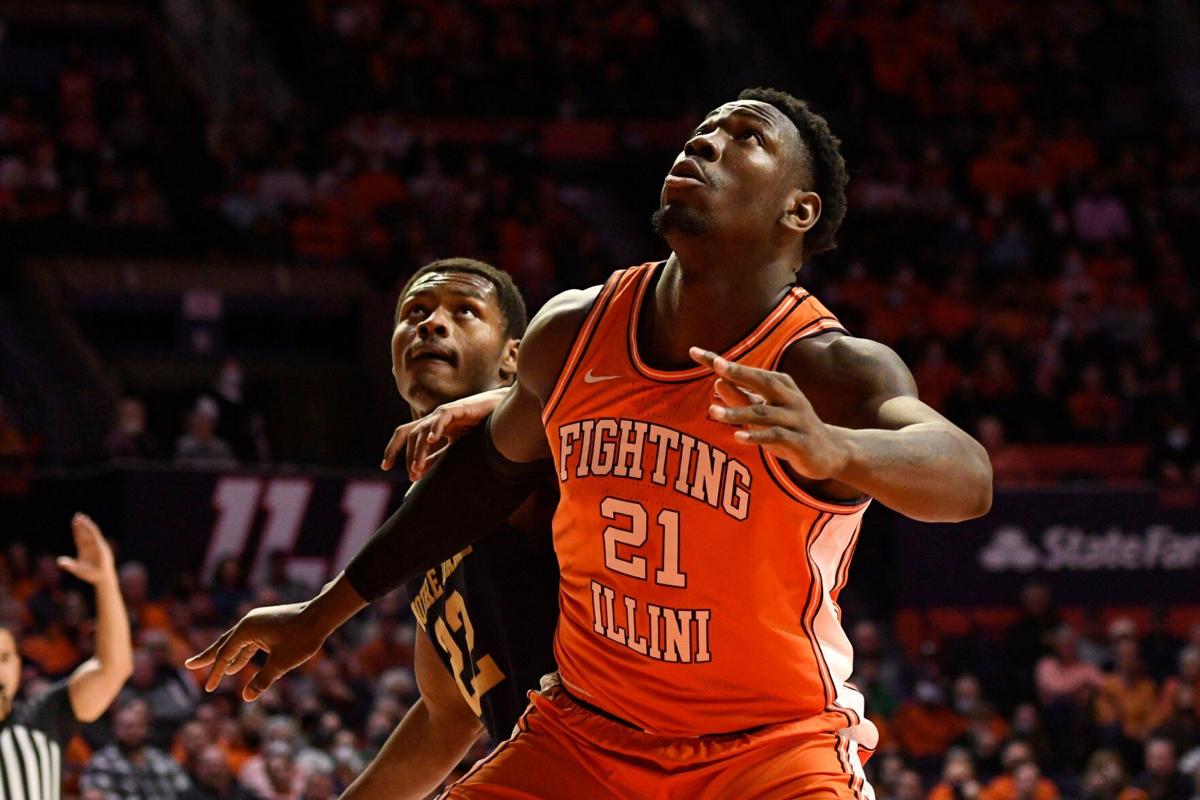 Illinois' Kofi Cockburn (21) boxes out Notre Dame's Elijah Taylor during the first half on Monday in Champaign.

“It’s the Big Ten. Games get to a different place and a different level when Big Ten games roll around,” Illinois coach Brad Underwood said of a 6 p.m. league game against Rutgers. “One of our goals is to win the Big Ten. If you can get through 20 games in this league and you come out on top, you have done a lot. That is a yeoman’s job. Job well done, men.”

The 5-2 Illini are not back to full strength after seven nonconference games that featured a key suspension, injuries and a nasty flu bug. Yet they do appear to be inching closer.

Underwood called Thursday morning’s practice “the first full day of having everybody in practice we’ve had even though we’re still cleaning up the back end of that flu bug.”

That does not, however, include point guard Andre Curbelo, who has battled head and neck issues. “It is a process,” said the Illini coach, “and he’s out.”

Illinois clearly benefitted from the return of senior guard Trent Frazier from a leg injury in Monday’s 82-72 win over Notre Dame in the Big Ten/ACC Challenge.

“It means a lot. Trent gives us toughness and leadership,” said center Kofi Cockburn, who is averaging 26.8 points and 9.5 rebounds. “That’s the type of person he is. When he comes on the floor, the leadership is always right. He knows what to say. It’s great having him.”

Underwood is encouraged by his team’s progress despite suffering two losses that dropped the Illini out of the national top 25.

“It’s establishing who we are,” said Underwood. “One of the reasons we play the toughest schedule we can is to make sure we get ourselves ready for these games.”

Rutgers is 4-3 and also scored a victory for the Big Ten against the ACC with a 74-64 decision over Clemson.

“This is a very good Rutgers team, an NCAA Tournament team that returns a lot, a team in the past we’ve had just battle royales with,” Underwood said. “They are one of the better defensive teams in not just the Big Ten but the country. The physicality piece we have to be ready for.”

"Kofi Cockburn is one of the best pure post-up guys in the country," Rutgers coach Steve Pikiell said. "He's huge. Cliff is going to be tested in a lot of ways and his basketball IQ will really come into fruition in the next couple of games."

Baker has missed the past two games because of injury.

“Baker is one of the better guards in our league,” said Underwood. “If he’s out, they get really big. They get even longer.”

Underwood took note of the Big Ten’s 8-6 win in the series of games with the ACC, the third straight year the Big Ten has prevailed.

“It shut everybody up. We (the conference) had some losses early everybody loves to talk about,” said the Illini coach. “It shows we’re really good again. We’re not afraid to lock horns with anybody.”

Watch now: Four takeaways from No. 25 Illinois' win against Michigan

Trent Frazier took the game over once again and Illinois ran away late to start 6-0 in Big Ten play.

Barry Lunney Jr. was hired as the Illini's new OC after being the OC at UTSA for the past two seasons.

Illinois gets a home matchup with No. 7 Purdue and an opportunity to extend its lead at the top of the Big Ten.

Watch now: After early hiccups, No. 25 Illinois has hit its stride heading into Nebraska

Illinois heads to Lincoln to play the Cornhuskers on a four-game winning streak.

Former All-American guard Ayo Dosunmu became the 34th player to have his jersey hung in the State Farm Center rafters after a halftime ceremony during Thursday's game.

Tupper: Can Andre Curbelo fit in with 'reimagined' Illinois when teams returns?

There was a script that loosely mapped out the way this Illini basketball season was supposed to go and almost immediately Brad Underwood was forced to crumple it up.

Petersen was hired in December of 2020, but was let go after the offense struggled in the 2021 season.

Illinois' Kofi Cockburn reacts to an official's call during the first half against Notre Dame on Monday in Champaign.

Illinois' Kofi Cockburn (21) boxes out Notre Dame's Elijah Taylor during the first half on Monday in Champaign.