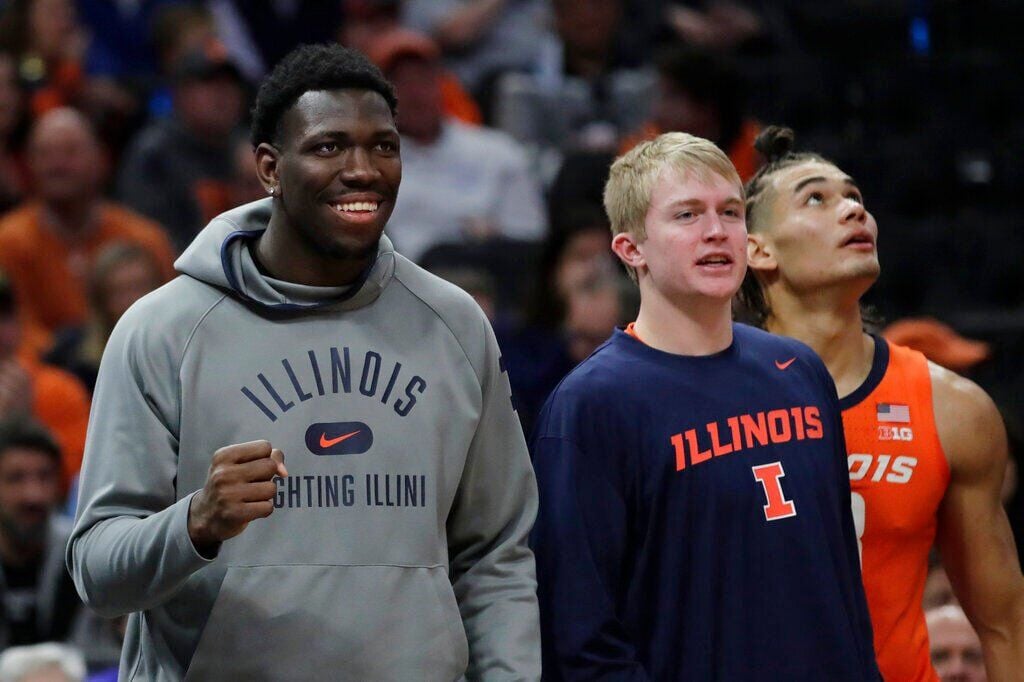 Illinois' Kofi Cockburn, left, cheers from the bench during the first half of the team's game against Marquette on Nov. 15 in Milwaukee. 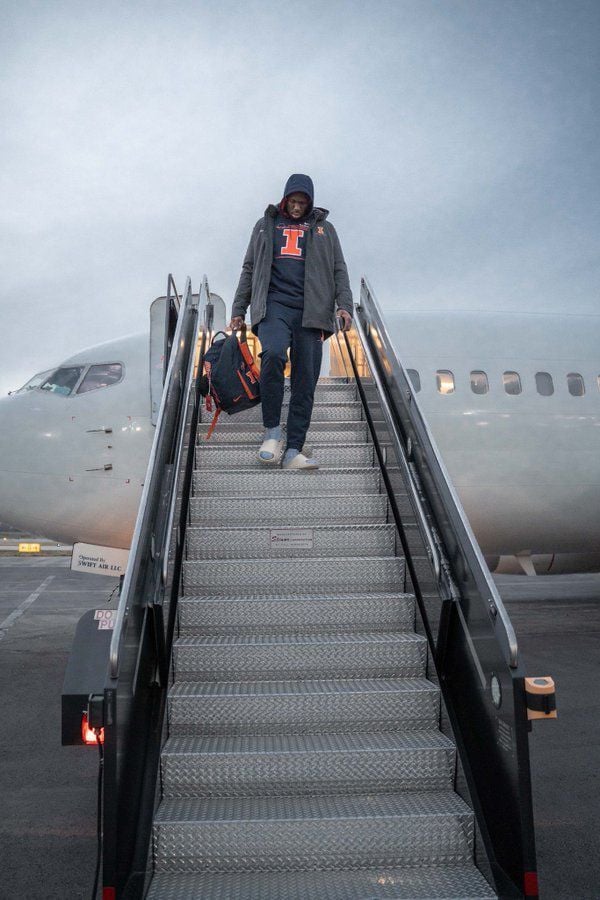 Preseason All-American center Kofi Cockburn, shown getting off the plane in Kansas City, returns to the Illinois lineup Monday against Cincinnati after a three-game NCAA suspension.

KANSAS CITY, Mo. – His emotions no longer “mixed,” Kofi Cockburn hopes to bring some clarity to the University of Illinois basketball team.

Cockburn, who missed the Illini’s first three games of the season while serving an NCAA suspension, returns to the Illinois lineup Monday in a 5:30 p.m. game against Cincinnati in the opening contest of the Hall of Fame Classic at the T-Mobile Center.

The 10th-ranked Illini went 2-1 in Cockburn’s absence, including a 67-66 loss at Marquette last Monday.

“They did some really great things without me. That gave me a lot of joy,” said Cockburn. “On the flip side, I wasn’t able to be out there. Three games is a long time when you haven’t missed a game in two years.”

Cockburn was suspended for selling team issued gear before the NCAA made such a practice permissible.

“I was 100 percent into going to the NBA. I figured I could sell gear and get some money,” he said. “But things changed and I decided to come back to college. I was upset (by the suspension). But it is what it is and we move forward.”

“He’s excited to be out there, and we’re excited to have him,” said Illinois coach Brad Underwood. “He’s a difference maker. Kofi gives you a breath of confidence. He has an air about him. No doubt he will be amped up. He’s excited to show everybody he’s worthy of the preseason hype.”

“I’m really comfortable with it,” he said. “I’m a basketball player, not just a big guy who dunks.”

Underwood also anticipates the return of graduate student Austin Hutcherson from injury. The 6-6 guard has yet to play this season.

“He’ll be in uniform and we’ll see what that looks like in terms of playing,” said the Illinois coach. “He’s looked very healthy and very good.”

Cincinnati is 4-0 and features a balanced scoring attack led by 6-7 senior Jeremiah Davenport at 12.5 points. David DeJulius, a 6-0 senior, adds 11.3.

“They are a team that mirrors us in a lot of ways,” Underwood said. “They guard, they rebound and they play extremely hard. We have to execute on the offensive end. Nothing is going to come easy.”

"They have four centers and they're all different," Underwood said.

Guard Trent Frazier is scoring 17.5 points over two games with Jacob Grandison at 15.0 and Coleman Hawkins at 14.3 with a team-high 9.3 rebounds.

The second game of the Hall of Fame Classic pits No. 16 Arkansas (3-0) against Kansas State (2-0) at 8 p.m. Monday’s losers play Tuesday at 6 p.m. with the championship game starting at approximately 8:30 p.m.

The Illini could face their former coach in Kansas State coach Bruce Weber. Underwood is a Kansas State alum.

“Bruce and I have a great relationship,” said Underwood. “I’ve been extremely proud of my alma mater since Bruce has been there. Bruce is loved by Illini Nation. He did great things when he was here.”

Illinois' Kofi Cockburn, left, cheers from the bench during the first half of the team's game against Marquette on Nov. 15 in Milwaukee.

Preseason All-American center Kofi Cockburn, shown getting off the plane in Kansas City, returns to the Illinois lineup Monday against Cincinnati after a three-game NCAA suspension.