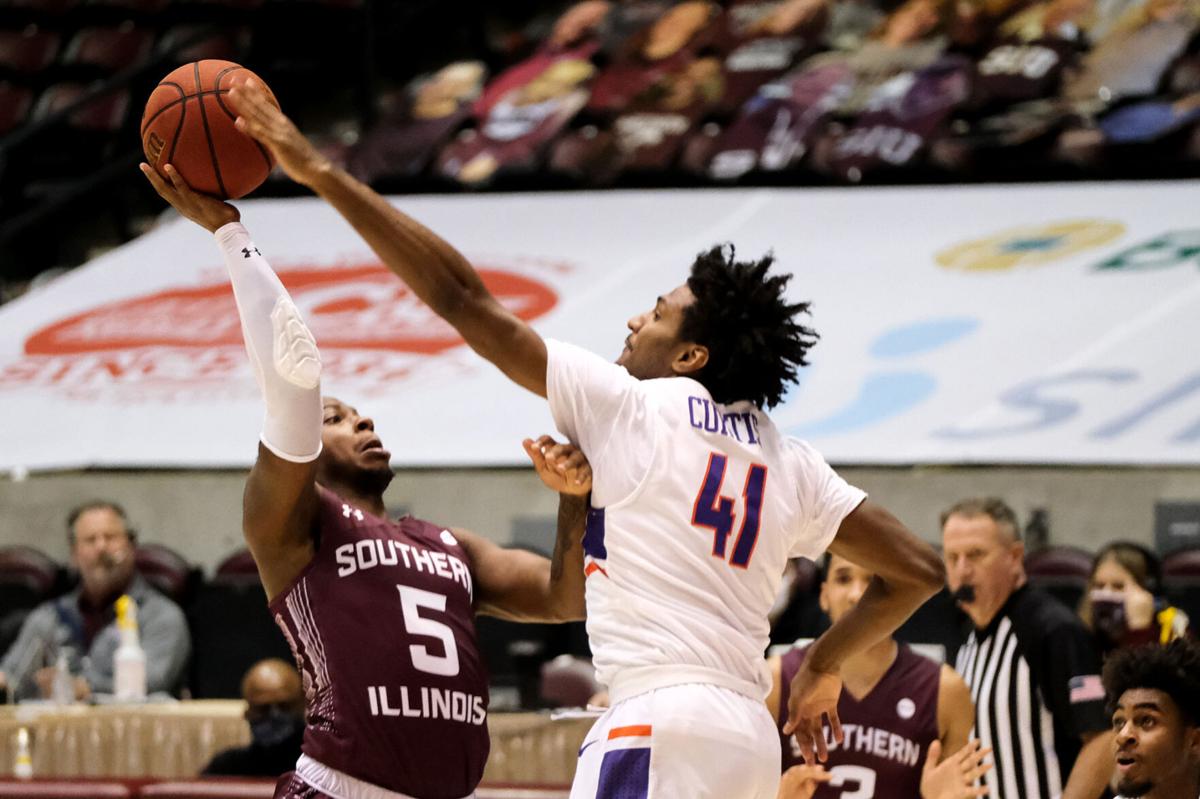 SIU guard Lance Jones (5) has his shot blocked by Evansville guard Samari Curtis (41) during the first half at the Banterra Center on Dec. 28 in Carbondale. 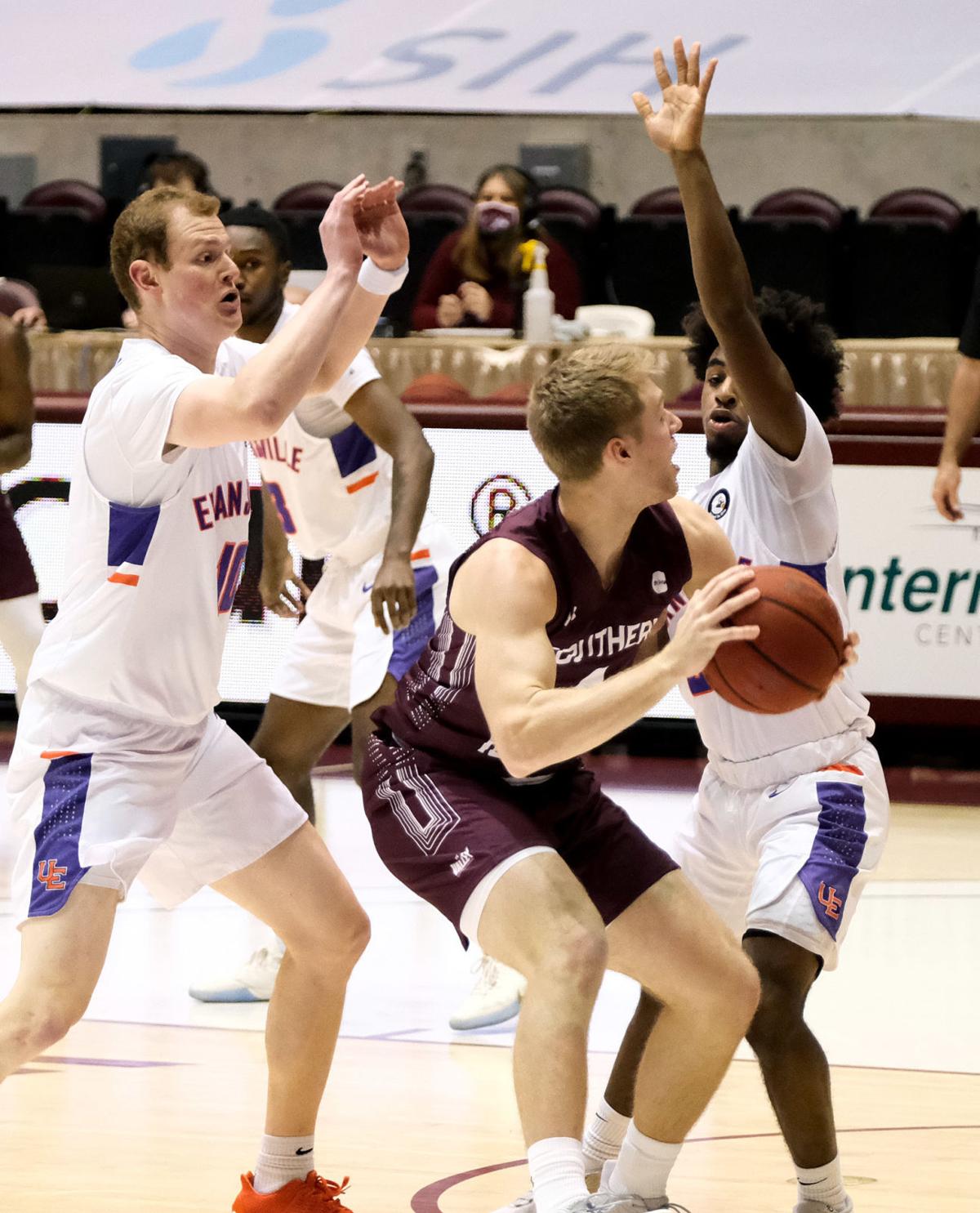 Evansville forward Evan Kuhlman (10) and guard Shamar Givance (5) defend SIU forward Marcus Domask (1) as he looks to get to the basket during the first half at the Banterra Center on Monday in Carbondale. 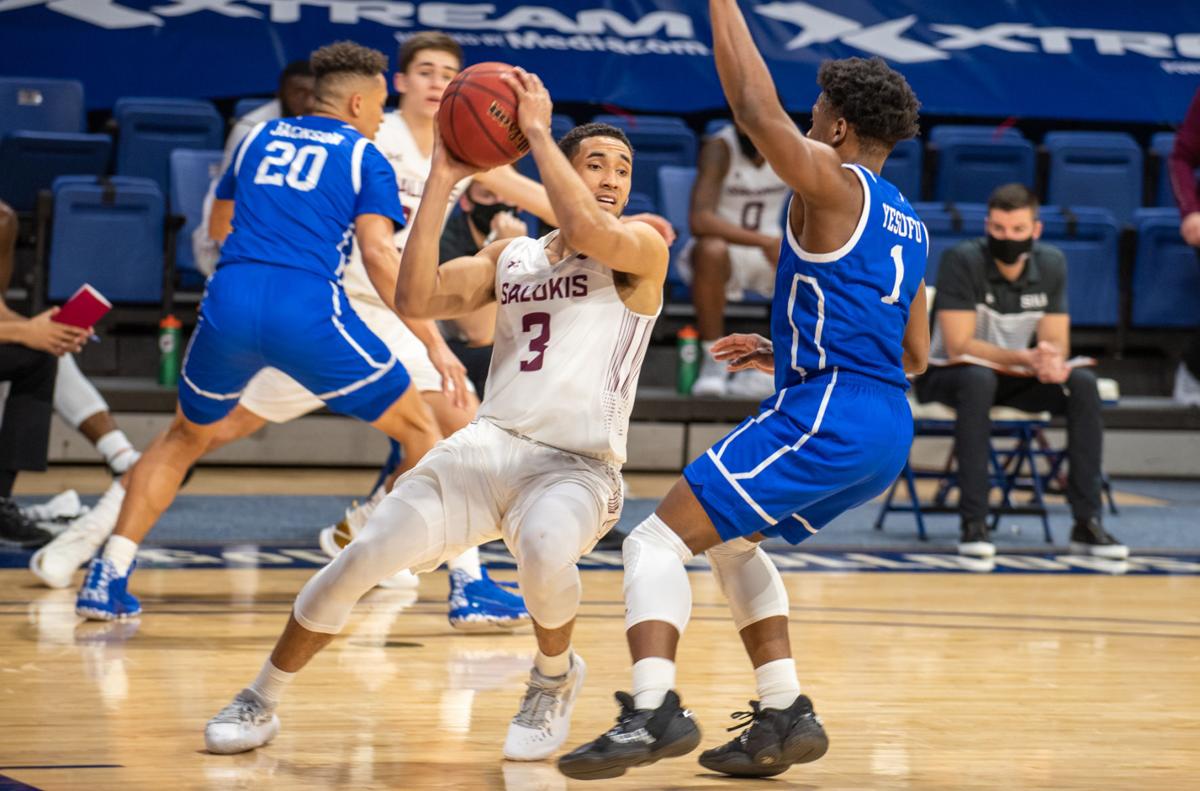 In an effort to get as many league games in as possible, the Valley moved to two-game, two-day series this season. After Bradley (7-4, 1-1 MVC) topped Northern Iowa (3-8, 2-4) Monday night, the Braves secured the fifth two-day split in the 11 league series. Bradley coach Brian Wardle said making adjustments, after winning or losing that first game, is about changing plans as much as motivating players to get up for the same team, at the same place, less than 24 hours later.

"You watch the film, and you say 'OK, maybe we have a few different plays to run the next day that they may not be ready for, we gotta do this a little better defensively, we can do this a little better defensively,' and, more than that, it is the guys' mental and physical mentality, over anything that you're gonna run," Wardle said. "If they're ready to go, and they feel good, and they're ready to be aggressive and tough, and compete at a high level, that's going to probably be the No. 1 thing, just getting their psyche ready."

Mullins said he's had to keep it simple for his squad for those second games, considering its youth. The Salukis, one of the 12 youngest teams in Division I in terms of experience, start four sophomores and bring four more underclassmen off the bench.

"For us, we're so young this year, it's a fine line between making too many adjustments and, as a coach, feeling like you're not making enough adjustments in those 24 hours (between games). But you can't change too much," he said. "At least for us, I know our guys need practice reps. They need to be able to go through it. You can adjust some plays, do some wrinkles offensively, try to take advantage of some actions, and obviously try to clean up some defensive mistakes. But it's hard to put a new post defense in or a new ball-screen coverage in in 24 hours without any (practice) reps."

Evansville's Todd Lickliter, the 2007 National Association of Basketball Coaches National Coach of the Year when he was at Butler, has had to change his normal routine with the series. Lickliter said in order to give his players as much time to recover physically and mentally, he only shows them video clips of things they want to examine instead of going through the entire first game.

"The thing is you have to make the right moves," he said. "There's probably a lot of things you'd do different, but you're not gonna have a complete game plan change. You gotta make those two or three adjustments that you know are gonna be grasped and carried out in such a short amount of time."

So far, Lickliter has made a lot of the right moves. The Purple Aces didn't win a Valley game last season, but after winning at SIU won three straight before Illinois State (4-6, 1-3) held on for its first league win, 73-68, Sunday at the Ford Center. Through three weekends, the Aces are in fourth place in the MVC by winning percentage (.667) and are tied with Drake for the second-most conference wins. Only Missouri State (8-1, 5-1), which is off to its best start since 2013-14, has more Valley victories.

Loyola (8-3, 3-1), one of the oldest teams in the Valley with four senior starters, was 2-0 in the league before losing at Indiana State (4-7, 1-5) 76-71. The Ramblers had 15 turnovers in that game, some of which came against a different full-court press the Sycamores used than they had prior to the game. The next day, Loyola had 10 turnovers in a 58-48 win.

Entering this weekend, home teams are 8-3 in the opening game of the series and 5-6 in the second game.

"You gotta look at what you didn't do well," Moser said. "You're gonna look at what you did well, and then you're gonna wonder 'Are they gonna counter something like that?' You have little games like that. There's not a lot of time. You're not gonna get reps. You're not gonna be on the practice floor doin' it, so, you just want to make a couple you think could help. You can't overload the kids, because it's going to be so much about them getting up again, competing, their effort, stuff like that."

PEORIA — They unveiled virtual versions of the Anthem and starting lineups Friday night at Renaissance Coliseum.

Two teams are on pause, and two others are off looking for more games.

Saluki Basketball 5@5: Black Out Cancer jerseys up for bids, and UNI-Loyola hits the big time

Get your Black Out Cancer jerseys now, Northern Iowa-Loyola hits the big time, and a former SIU assistant coach will lead an NBA G League team…

SIU guard Lance Jones (5) has his shot blocked by Evansville guard Samari Curtis (41) during the first half at the Banterra Center on Dec. 28 in Carbondale.

Evansville forward Evan Kuhlman (10) and guard Shamar Givance (5) defend SIU forward Marcus Domask (1) as he looks to get to the basket during the first half at the Banterra Center on Monday in Carbondale.