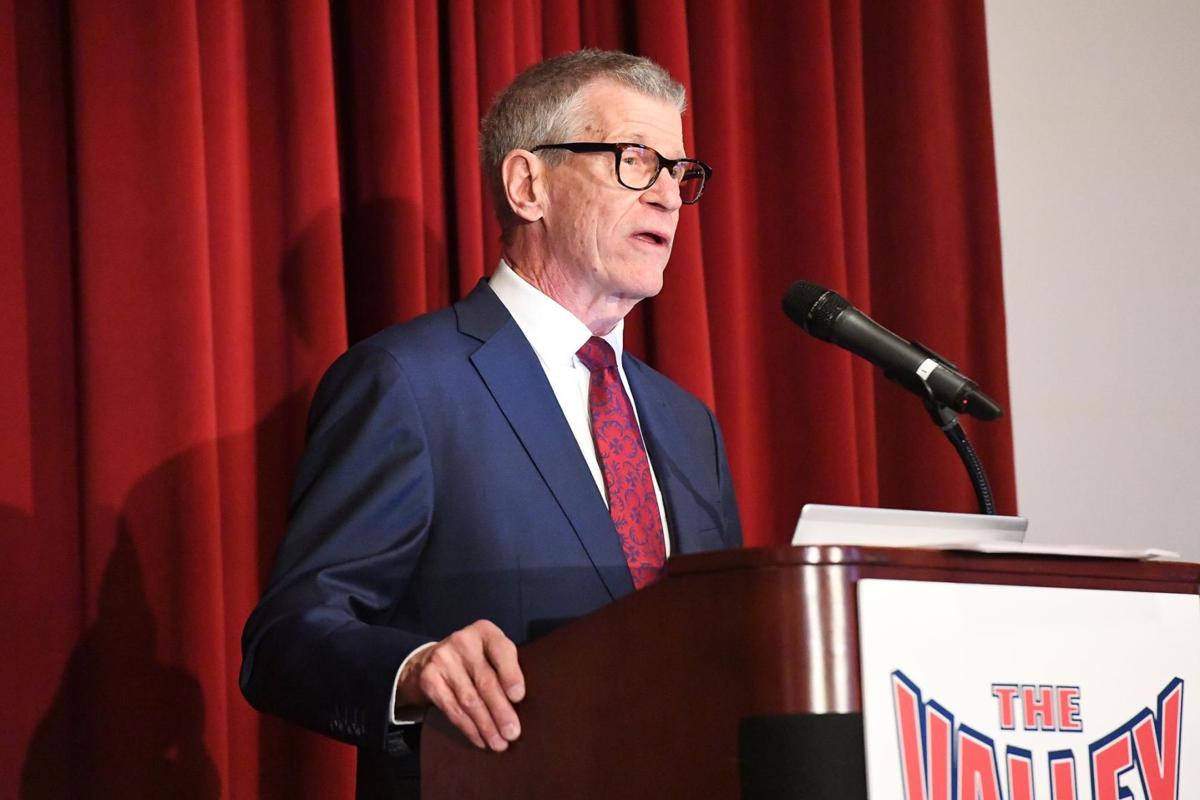 Doug Elgin, the commissioner for the Missouri Valley Conference for the last 33 years, announced he will retire at the end of the 2020-21 school year.

He moved the league's biggest event, its historic men's basketball tournament, to a neutral site before it was mainstream to do so, and did the same for the women's tournament even though it wasn't particularly profitable. And when the biggest pandemic to hit our shores in forever eliminated the 2019 NCAA Tournament and threatened the start of the 2020-21 season, MVC Commissioner Doug Elgin still decided to stay.

The longtime commissioner of the league announced he will retire next year, but he's not leaving yet.

"It is my senior year. I'm the only true senior on the call," Elgin said Thursday during a Zoom call with league media since we couldn't get together in person like normal. "I really look forward to the upcoming basketball season, and the rescheduling we've done with fall sports to spring, it's going to be a wild climax to my 33 years, but, again, I'm really excited to be a part of this."

Like most of you, I've only known Elgin to be at the head of the Valley, which SIU has called home since 1974. He's been on the NCAA selection committee and the NIT selection committee, and helped the Valley redefine itself by acquiring Loyola and Valparaiso. Loyola, which had a losing record in 2015-16, won 32 games and went to the Final Four two years later.

I can't imagine the Valley without him, and even though the MVC Presidents Council has a year to find his replacement, I struggle to see how they'll find an improvement.

The longest-tenured commissioner in a multi-sport Division I conference in the country, Elgin came to the Valley in 1988. He expected to stay only a couple of years, but helped the league find a niche as a mid-major basketball powerhouse. Their teams won 10 straight first-round games in the NCAA Tournament between 2012-18, almost unheard of for a mid-major, and before that, five teams seeded 12 or worse at the Big Dance won.

After adding Missouri State, Northern Iowa and Evansville in the 1990s and merging the league with the women's sports' Gateway Conference in 1992, Elgin's biggest accomplishment was actually moving the Valley's biggest event off member schools' campuses.

Elgin helped move the women's tournament to a neutral site in 2008, to St. Charles, Missouri, when most major women's basketball tournaments were being held at campus sites. The event moved to the iWireless Center (now known as the TaxSlayer Center) in Moline in 2016, where it has thrived.

During Elgin's tenure, the Valley has hosted 12 NCAA basketball postseason events in St. Louis, including the 2001 and 2009 Women's Final Fours, the 2005 Men's Final Four, and several men's regional games. The league received a bid to host first and second-round games of the 2026 NCAA Tournament earlier this week.

“I’ve been blessed to have had the opportunity to work in a conference that has valued the academic and competitive success of its student-athletes,” Elgin said. “We’ve had very committed campus leadership and great coaches during my time here. And the continuity and extraordinary dedication of our staff has played a major role in keeping the MVC in a position of prominence.”

Good luck to Elgin in the future, both the near version and the retired one.

• Verplancken approved for takeoff: SIU sophomore guard Steven Verplancken Jr., a transfer from Division II Glenville (West Virginia) State, had his waiver for the upcoming season approved by the NCAA.

The 6-foot-4, 200-pound guard is a fantastic story. He was born in the Dominican Republic and moved to Belgium when he was 9 years old. He played for a top-20 team as a high school senior but never received a Division I offer, so he went to Glenville State and averaged 16.4 points, five rebounds and 3.1 assists per game in 28 games as a true freshman. He shot 50% from the field and 45% from the 3-point line, and should give the Salukis some instant offense.

CARBONDALE — Doug Elgin, the commissioner of the Missouri Valley Conference that brought in Loyola and Valparaiso and moved the league's baske…

In the MVFC, NDSU leads in revenue by a surprising margin

Our analysis of MVFC finances shows NDSU's football team drew more in ticket sales during the 2018-19 fiscal year than seven other programs in the Missouri Valley Football Conference made in total revenue.

Valparaiso men's basketball coach Matt Lottich is not sure what he will do if Indiana is still on the travel quarantine list for Chicago when the Crusaders are scheduled to go play Loyola on Jan. 30.

Doug Elgin, the commissioner for the Missouri Valley Conference for the last 33 years, announced he will retire at the end of the 2020-21 school year.