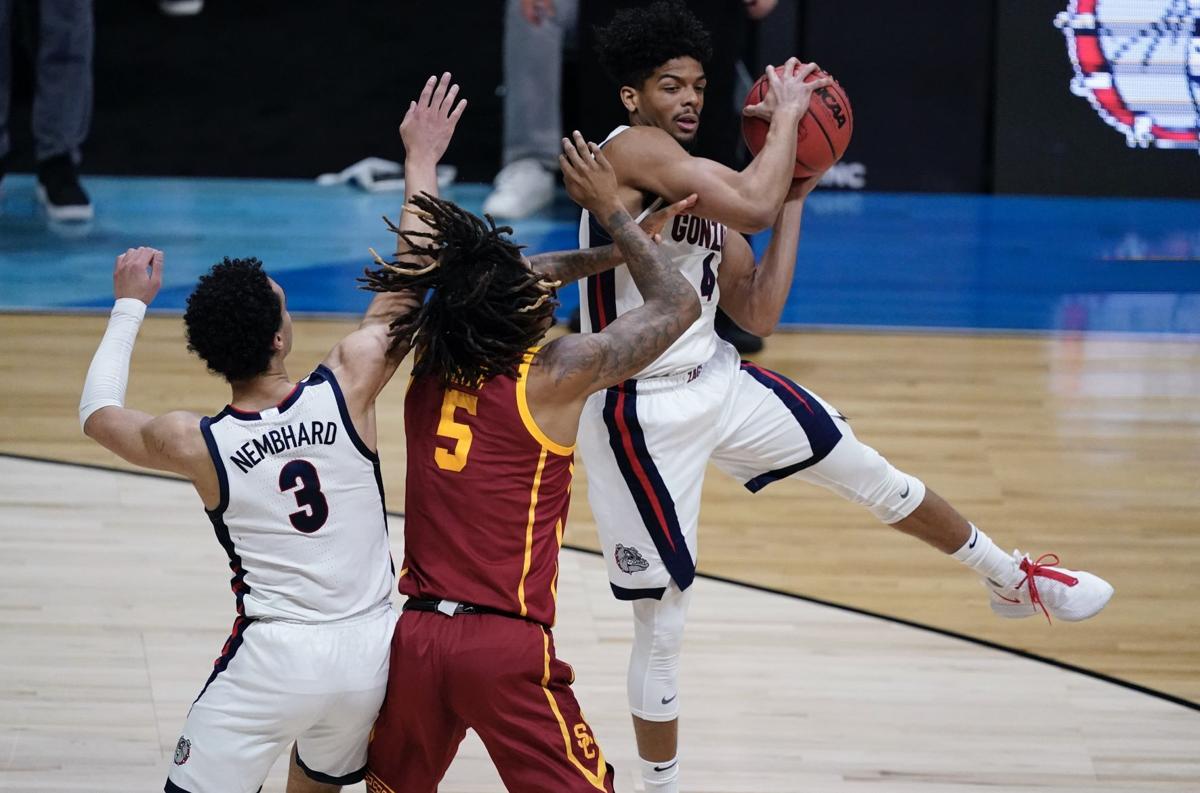 Gonzaga guard Aaron Cook, grabs a rebound over Southern California guard Isaiah White (5) during the first half of an Elite 8 game in the NCAA men's college basketball tournament at Lucas Oil Stadium on Tuesday. 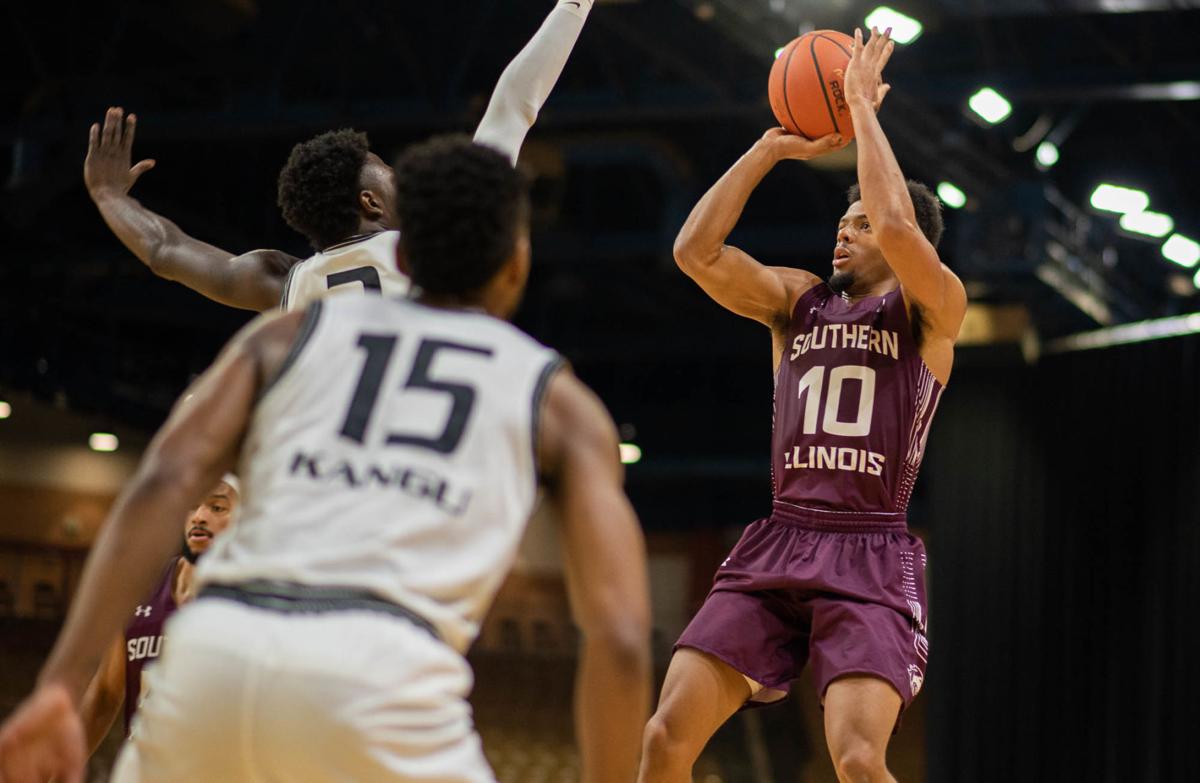 SIU guard Aaron Cook shoots against Oakland during a game this season at the Silver Spurs Arena in Kissimmee, Fla. Cook made the Sunshine Slam All-Tournament Team after the Salukis went 1-2 during their three-game stretch in Florida.

There were 1,178 Division I men's basketball players in the transfer portal as of Friday afternoon, according to verbalcommits.com, a website that tracks players' scholarship offers, movements and how they fit into teams' rosters. There were 1,025 that went through the portal all of 2020.

April has just begun, and with everyone getting an additional year of eligibility, and the NCAA expected to pass a one-time transfer rule later this year, several major players from the Missouri Valley Conference are a part of it. Illinois State guard D.J. Horne, one of the best young players in the league, and Drake guard Joseph Yesufu, who pulled the Bulldogs to the championship game of the MVC Tournament and an at-large bid to the NCAAs, entered earlier this week. Valparaiso's Donovan Clay and Jacob Ognacevic are in the portal. Indiana State forward Jake LaRavia (Wake Forest) and Tre Williams (Duquesne) have already left the Sycamores and found new teams for the 2021-22 season.

Kids transfer for all kinds of reasons. They want more playing time, like SIU's Eric Butler, the only Saluki in the portal as of Friday. There is a coaching change, like there was at Indiana State. Kids go through a traumatic experience, like a major injury, sit out, and want a change of scenery. Sometimes players feel like they can compete on a bigger stage, and the grass is not always greener on the other side.

Darius Beane, and his dad, Anthony Beane Sr., both left SIU after Barry Hinson resigned. Beane was an assistant coach here. Both went to Northern Illinois, which won 18 games in 2019-20 and three this season. Forward Dantiel Daniels, part of one of SIU's greatest recruiting classes, went to Colorado State and did OK.

Cook, SIU's leading scorer in 2019-20 before he got hurt in the sixth, has done better than OK. He wanted to play in the NCAA Tournament, and found a way on to one of the nation's greatest traditions after transferring. Cook is now a backup guard for the No. 1-ranked team in America, 30-0 Gonzaga, which takes on UCLA (22-9) Saturday in the Final Four in Indianapolis. With three All-Americans, first teamer Corey Kispert and second teamers Jalen Suggs and Drew Timme, the Zags are pursuing the first undefeated season since Indiana went 32-0 in 1975-76.

Cook scored a season-high 15 points against Pepperdine and has had a pretty good tournament run. The 6-foot-1, 180-pound fifth-year senior played a season-high 21 minutes in Gonzaga's blowout of Norfolk State in their first tournament game, and handed out seven assists. In four NCAA Tournament games, he's 6 of 10 from the field, 5 of 8 from the 3-point line, for 19 points. He's also grabbed six rebounds and handed out nine assists on a team where they're easy to get.

SIU missed the postseason for the 12th straight season this year, battling injuries, COVID-19 and a Jekyll and Hyde defense that allowed 68.1 points per game. The Salukis went 5-13 in the MVC and 12-14 overall. Gonzaga is in its 22nd straight NCAA Tournament appearance and goes for its 35th straight victory dating back to last season.

Former Saluki guard/forward Brendon Gooch didn't quite make the Division II national tournament, but he played a big role on a 10-9 McKendree University squad. Gooch averaged 14.9 points and 7.9 rebounds per game in his first season with the Division II program. He earned second team all-conference honors and shot 54.4% from the field and 45.5% from the 3-point line (51 of 112).

Gooch had five double-doubles, scoring 21 points to go with 14 boards in a three-point win at Missouri S&T and putting up 22 and 15 in a four-point loss at Drury. His 17 blocks led the team. Former Saluki guard Harwin Francois started three of 13 games at McNeese this season, and averaged 7.7 points and 3.3 rebounds per game. His program (10-14) had to battle two major hurricanes, and coach/athletic director Heath Schroyer left the bench to become the full-time AD. McNeese promoted associate head coach John Aiken to the top spot.

Another former Saluki guard Karrington Davis didn't play in 2019-20 because of injury, but has started 12 of 18 games at Butler (Kansas) Community College this season. Davis, a guy who won a national championship in high school and started his collegiate career at Nebraska, is averaging 7.7 points and 4.2 rebounds per game for the 16-6 Grizzlies. They open regional tournament play Monday.

The FCS national title game has appeared on one of ESPN's three main networks the last few years. The coronavirus has given this level of foot…

Gonzaga guard Aaron Cook, grabs a rebound over Southern California guard Isaiah White (5) during the first half of an Elite 8 game in the NCAA men's college basketball tournament at Lucas Oil Stadium on Tuesday.

SIU guard Aaron Cook shoots against Oakland during a game this season at the Silver Spurs Arena in Kissimmee, Fla. Cook made the Sunshine Slam All-Tournament Team after the Salukis went 1-2 during their three-game stretch in Florida.