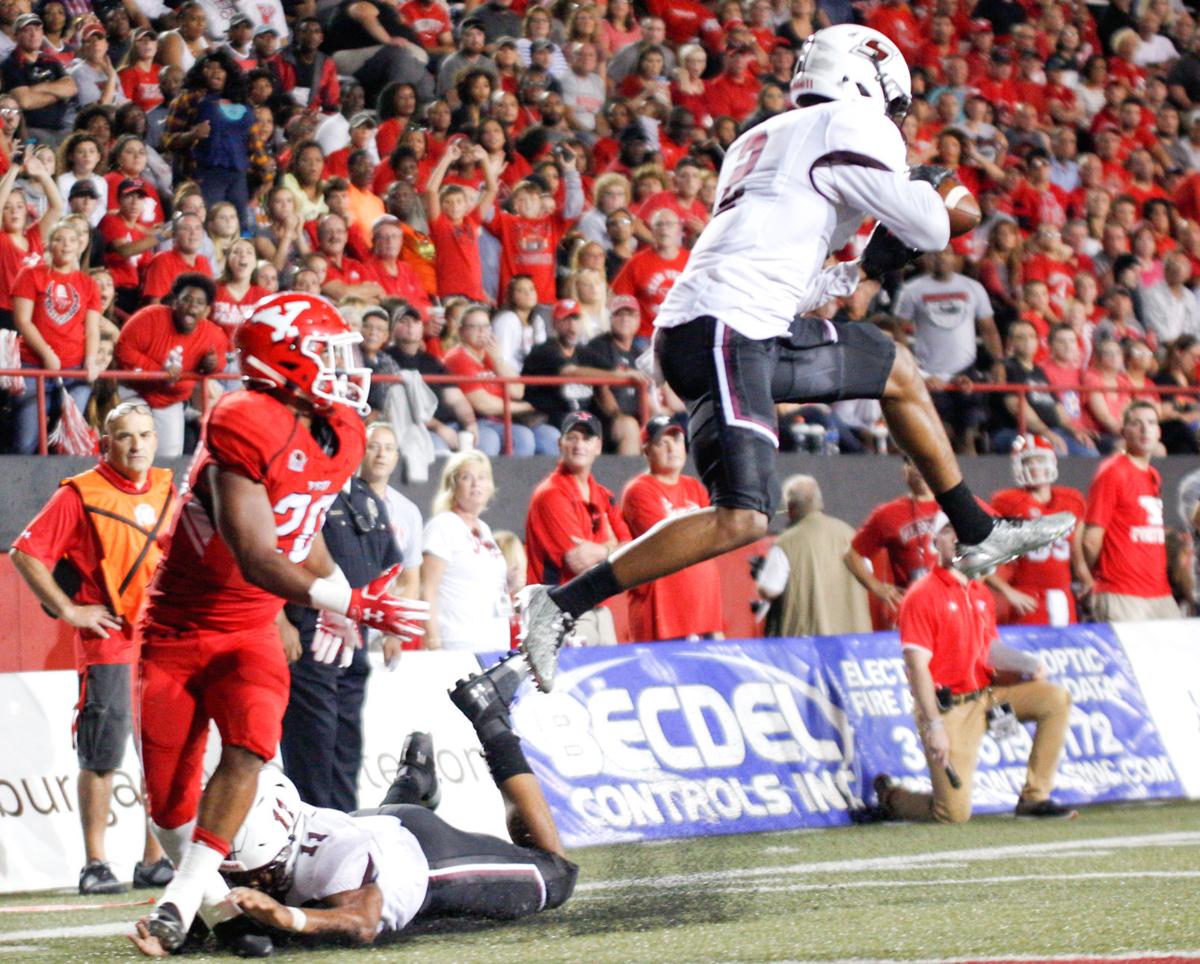 Southern Illinois' Jeremy Chinn intercepts the ball from Youngstown State during the first half of their game at Stambaugh Stadium in 2018. 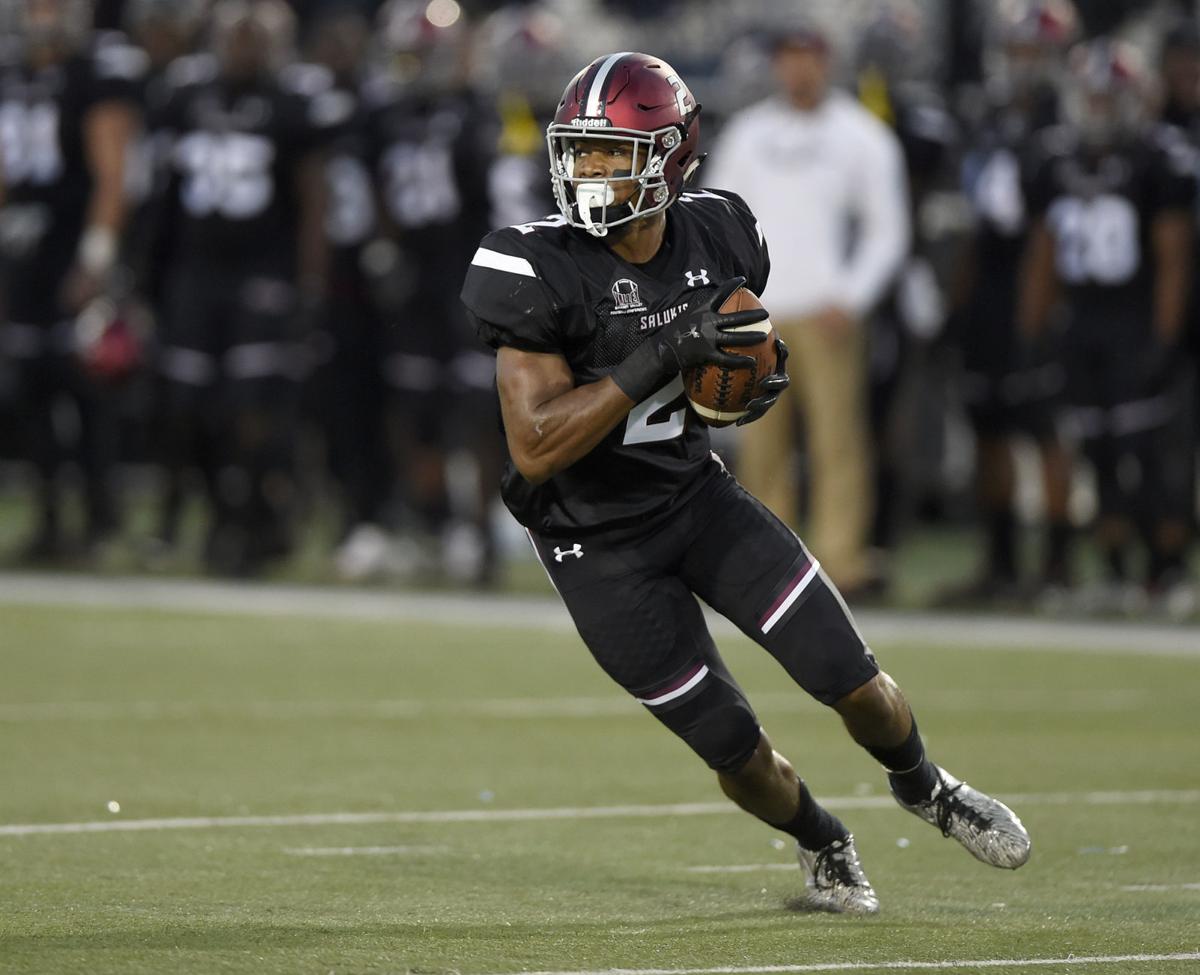 SIU safety Jeremy Chinn (2) returns an interception against South Dakota at Saluki Stadium in 2018. A junior, Chinn was the only Saluki to earn first team All-MVFC honors.

CARBONDALE — The Carolina Panthers traded up with Seattle to snag SIU safety Jeremy Chinn with the last pick of the second round of the NFL draft Friday night.

Chinn, a 6-foot-3, 221-pound senior, became the first Saluki to be selected in the top-three rounds since former quarterback Rick Johnson went in the second round of the 1984 supplemental draft. Chinn became the first SIU player drafted since former tight end MyCole Pruitt in 2015, when he went to Minnesota in the fifth round.

Chinn met with all 32 NFL teams during the week of the NFL Combine and worked out on the field at Indianapolis' Lucas Oil Stadium. He ran a 4.45 40-yard dash at the combine and had the second-best vertical jump (41 inches) of all the defensive backs at the event. His 11-foot, 6-inch standing broad jump tied for the second-best of anyone at the combine, regardless of position. Analysts from ESPN.com, NFL.com and CBS Sports all projected Chinn to get drafted in the second round in their latest mock drafts.

SIU football coach Nick Hill was on a Zoom call with Chinn and a few of his teammates when the Panthers called to inform him they were taking him.

"It was awesome. It was just like you would expect," Hill said. "Like a fan, I've been glued to the TV for all 64 picks, just waiting for him to get picked. I think he's got the best attitude you could have, just be grateful anywhere you go. To go in the second round, it's big time, and he deserves it. Like I've said before, I don't know many guys that deserve it more than Jeremy because he's done it the right way. He's worked extremely hard and not left anything to chance."

Chinn was not able to do any individual workouts for teams because of the coronavirus, but was busy in the days leading up to the draft. Carolina coach Matt Rhule met Chinn at the Senior Bowl, he said, and knew he could fit in well with his positionless defense.

"Rare, rare height, weight, speed," Rhule said in a video posted by Carolina Blitz on Twitter. "He's also been a captain for multiple years on their leadership council, so, he's an elite person. You don't find guys that are that big and run that fast."

Alabama's Xavier McKinney was the first safety off the board Friday, when he was selected by the New York Giants with the fourth pick of the second round. Kyle Dugger, a Division III safety from Lenoir-Rhyne, was picked by New England with the next pick. LSU's Grant Delpit, the Jim Thorpe Award winner, which goes to the top defensive back in the country, went to Cleveland with the 44th overall pick. Ohio State's Antoine Winfield Jr. went to Tampa Bay with the 45th pick.

Chinn became just the fourth former Saluki defensive back to be taken in the draft, behind Terry Taylor (first round, 1984), Dennis Harmon (eighth round, 1963) and Korey Lindsey (seventh round, 2011).

The NFL draft continues Saturday beginning at 11 a.m. on ABC, ESPN, ESPN Deportes and the NFL Network. Fans can also watch the draft through the ABC, ESPN or NFL apps with applicable subscription/proper cable provider.

Carolina has four picks left, one in each of the draft's final four rounds. The Panthers finished 5-11 last season, in last place in the NFC South. They were 31st in the league in scoring defense, 23rd in total defense and 13th in pass defense.

Former Saluki defensive backs that have been taken in the NFL draft:

They met at the Senior Bowl in Mobile, Alabama, in late January.

The NFL started with the most draftable player out of the Missouri Valley Football Conference, SIU safety Jeremy Chinn, and then pretty much forgot about the rest.

MyCole Pruitt made the most of his first reception of the season for the Tennessee Titans.

Southern Illinois' Jeremy Chinn intercepts the ball from Youngstown State during the first half of their game at Stambaugh Stadium in 2018.

SIU safety Jeremy Chinn (2) returns an interception against South Dakota at Saluki Stadium in 2018. A junior, Chinn was the only Saluki to earn first team All-MVFC honors.