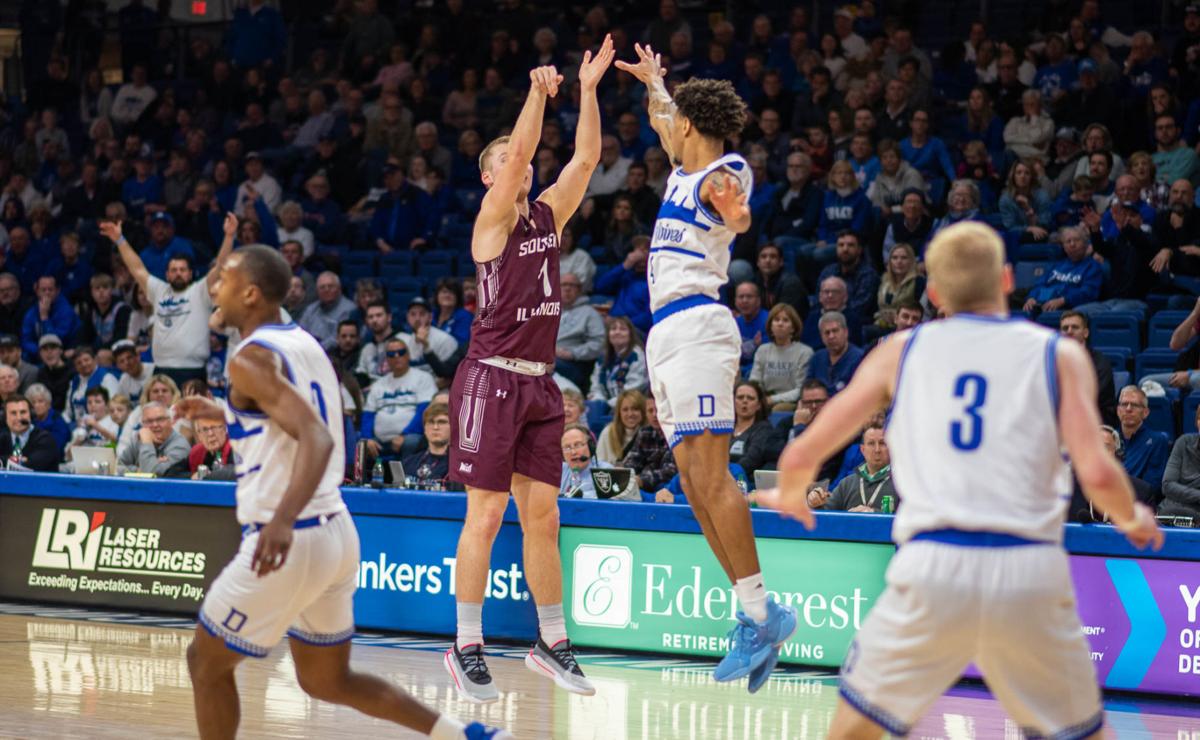 SIU's Marcus Domask fires against Drake's Anthony Murphy (second from the right) at the Knapp Center in Des Moines in this file photo from the 2019-20 season. Domask scored a career-high 28 points in the Salukis' 79-72 win. 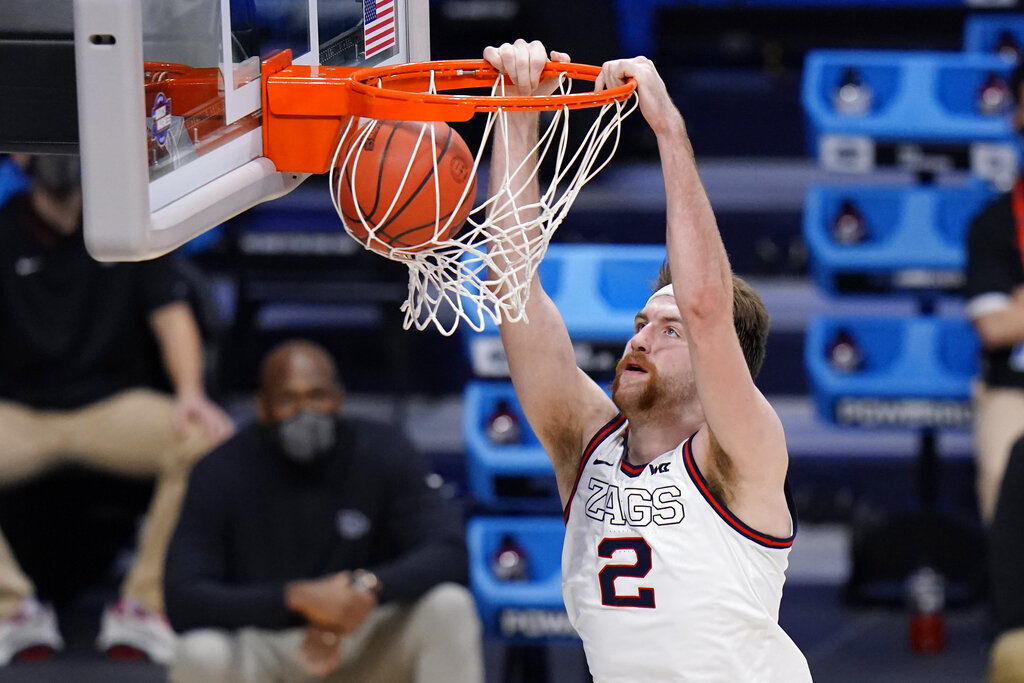 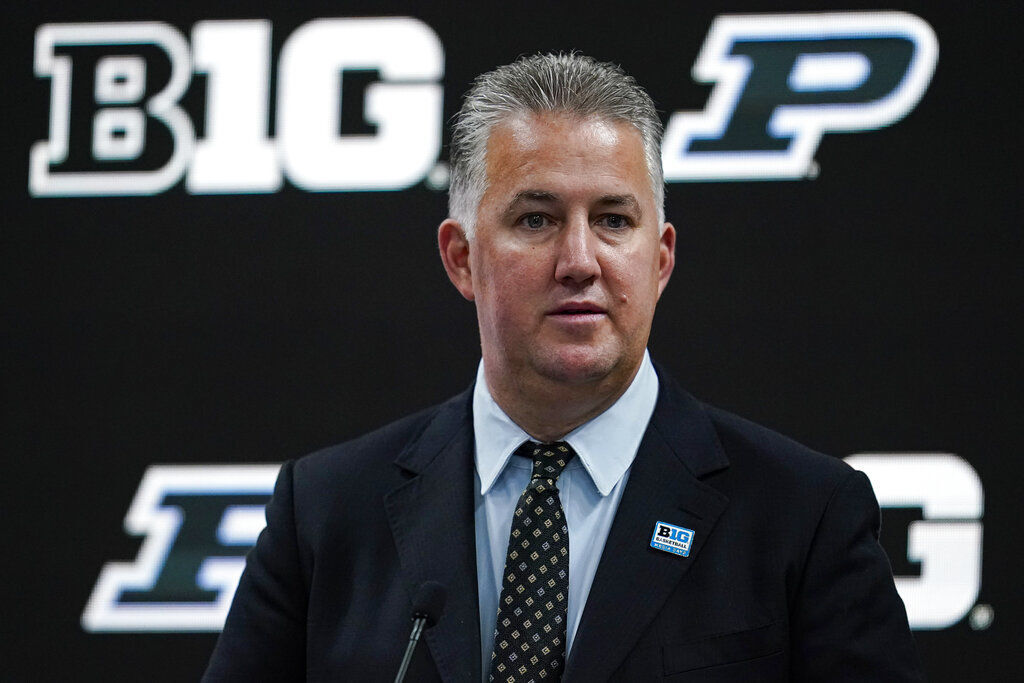 The Bulldogs return all five starters, as well as four of their top-five bench scorers, from last season's 26-5 squad that earned the program's first at-large bid to the NCAA Tournament. Drake finished a game behind Loyola during the regular season and reached the semifinals of the Missouri Valley Conference Tournament before falling to the eventual-champion Ramblers. The Bulldogs beat Wichita State 53-52 in the NCAA Tournament before losing to USC 72-56.

Tucker DeVries, Drake coach Darian DeVries' son, was the Iowa Gatorade Player of the Year and a top-100 recruit on Rivals.com (95).

Gonzaga, which came up short in its pursuit of the first perfect season in college basketball in 45 years in the national title game, was the preseason No. 1. Coach Mark Few's Bulldogs earned 55 of 63 first-place votes from a national panel to easily outdistance No. 2 UCLA in the preseason poll. UCLA earned the other eight first-place votes. Kansas, Villanova and Texas rounded out the top five.

Purdue and former Saluki coach Matt Painter were seventh in the preseason poll. The Boilermakers return all five starters from last season's 18-10 squad that reached the NCAA Tournament. Purdue was 34th in the country in defensive efficiency, according to KenPom.com, a website that tracks statistical analytics.

Belmont, which is scheduled to leave the Ohio Valley Conference to join the MVC after this season, received seven votes. Colorado, which is scheduled to open the Paradise Jam against SIU on Nov. 19 in the U.S. Virgin Islands, received four votes. The Buffaloes lost McKinley Wright (15.2 ppg.) to the NBA, but return two starters from last season's 23-9 squad and added the No. 1 recruiting class in the Pac-12. Colorado State, which is also in the Paradise Jam, received 11 votes.

The Big Ten and Southeastern conferences had a national-best five ranked teams each. The Big Ten has No. 6 Michigan, No. 7 Purdue, No. 11 Illinois, No. 17 Ohio State and No. 21 Maryland. The SEC has No. 14 Alabama, No. 16 Arkansas, No. 18 Tennessee and No. 22 Auburn joining Kentucky. The ACC is next up with four, with No. 20 Florida State and No. 25 Virginia joining Duke and UNC.

CARBONDALE — Season tickets are on sale, the Missouri Valley Conference preseason poll will come out Oct. 20, and the schedule is online. The …

CARBONDALE — There was a morning in July that, for a moment, J.D. Muila had to remind himself where he was.

ST. LOUIS — For the first time on record, Drake has been picked as the preseason favorite in the Missouri Valley Conference men’s basketball r…

CARBONDALE — Lance Jones has his sidekick back with the return of 6-foot-6 forward Marcus Domask, SIU's leading scorer and rebounder in 2019-2…

ST. LOUIS — Four players from the Missouri Valley Conference were among the 25 members of the preseason watch list for the 2022 Becky Hammon M…

CARBONDALE — After more than 600 days and two strains of the coronavirus, fans are coming back to the Banterra Center Tuesday night.

Saluki Basketball 5@5: Reddies will be defensive, who might start tonight and SIU's perimeter power

A look at Henderson State, who might start for SIU tonight, and another league guard is honored by The Athletic, all in today's Saluki Basketb…

CARBONDALE — In a year where rebuilding is the exception instead of the rule, most of the best Missouri Valley Conference men's basketball tea…

SIU's Marcus Domask fires against Drake's Anthony Murphy (second from the right) at the Knapp Center in Des Moines in this file photo from the 2019-20 season. Domask scored a career-high 28 points in the Salukis' 79-72 win.