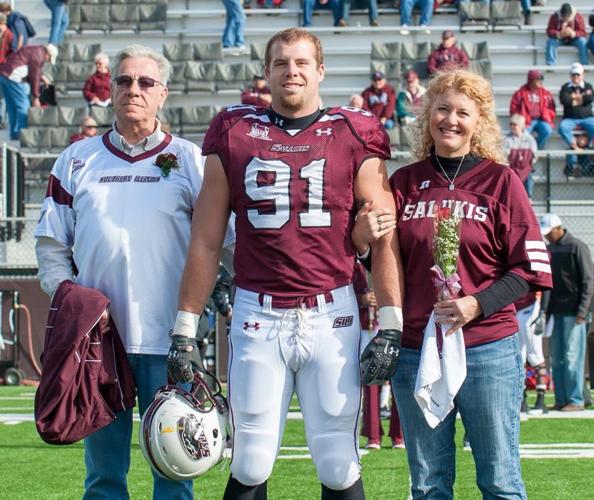 Jason Seaman, center, is pictured in a photo released by Saluki Athletics on Facebook. 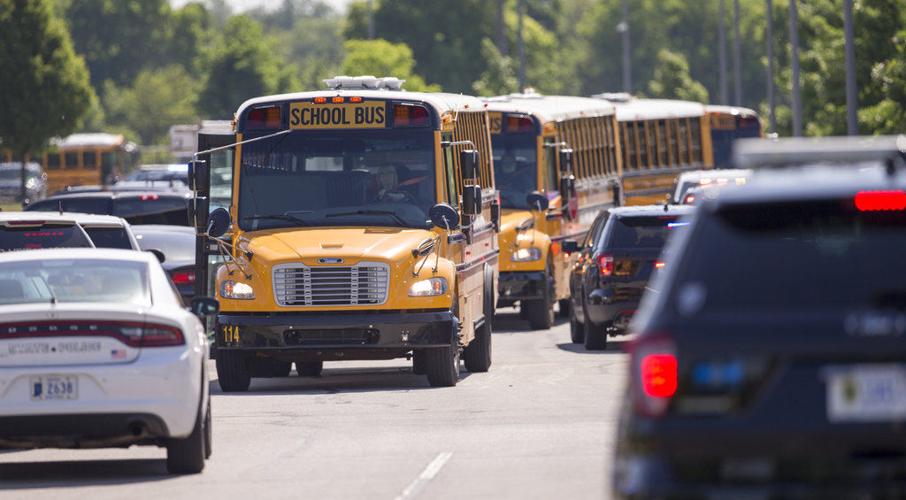 Empty school buses leave after a shooting at Noblesville West Middle School in Noblesville, Ind., on Friday, May 25, 2018, in this photo from the Indianapolis Star. A male student opened fire at the suburban Indianapolis school wounding another student and a teacher before being taken into custody, authorities said.

The 6-foot-5, 270-pound bruiser from Mahomet that had to take on two guys as the Salukis' noseguard on occasion, and the one that studied elementary education, and wanted to teach younger kids the best in life.

So when Lennon found out Seaman was the middle school science teacher in Noblesville, Indiana, that took three bullets Friday and still tackled a student who opened fire in his class, it all made sense.

"You wonder what happened, and then, it didn't surprise me at all. That's just his personality," said Lennon, a two-time Missouri Valley Football Conference coach of the year who led SIU to its last two playoff appearances in 2008 and 2009. "That's who he was. Big tough guy, but this just kinda tells you what kind of person he was."

Seaman was hailed as a hero after a male student, armed with two handguns, opened fire at Noblesville West Middle School at just after 9 a.m. Seaman took one shot through his abdomen, one in his hip and one in his forearm, according to a Facebook post by his mother, Kristi J. Hubly Seaman. He underwent surgery at Indiana University Health Methodist Hospital and was in good condition Friday afternoon, according to his mother. A 13-year-old student was in critical condition Friday night at Riley Hospital for Children, according to authorities.

Seventh-grader Ethan Stonebraker said Seaman likely prevented even more injuries in the class by confronting the shooter, who he said pulled out a gun and opened fire while the class was taking a test.

"Our science teacher immediately ran at him, swatted a gun out of his hand and tackled him to the ground," Stonebraker said. "If it weren't for him, more of us would have been injured for sure."

Noblesville police chief Kevin Jowitt said the suspect asked to be excused from class before returning with the guns. Investigators believe he worked alone.

Jason Seaman released a statement at just after 5 p.m.:

"First of all, thank you to the first responders from Noblesville and Fishers for their immediate action and care," he said. "I want to let everyone know that I was injured but am doing great. To all the students, you are all wonderful and I thank you for your support. You are the reason I teach."

"Someone asked me if I was surprised by what he did, and I said 'Absolutely not,' he was our type of kid," Kill said in a story posted on SIUSalukis.com. "That's what he stood for. He's a great young man and I'm praying for him to be OK. I saw a statistic that more kids are being killed in schools than are dying in the military. This stuff has got to stop."

SIU football coach Nick Hill, a quarterback that played his senior year with Seaman, remembered him as a dedicated player.

"He stepped up as a hero and saved, no telling how many lives, so, it's hard to put into words," he said. "It should all be about him and his family. Knowing him, he's not going to want it to be about him, but he'd say that he'd do it all over again, too. It's just the kind of person he is."

Jason Seaman started at Noblesville West Middle School in 2014 as a seventh-grade science teacher, according to his LinkedIn page. He added seventh-grade football coach two years ago. He is married with two young children, according to his brother, Jeremy, who told the Indianapolis Star he has a toddler son and 1-month-old daughter.

A three-sport athlete in high school, he tore his ACL playing basketball his junior year but was able to return to the football field by August. The 29-year-old will turn 30 in September.

Noblesville, which is about 20 miles northeast of Indianapolis, is home to about 50,000 people and a heavy recruiting area for SIU. Offensive lineman Josh Podzielinski is from Noblesville, and second team all-conference safety Jeremy Chinn is from nearby Fishers. The middle school has about 1,300 students from grades 6-8. The school's academic year was scheduled to end next Friday.

Indiana's Senate Democrats issued a statement in response to Friday's school shooting expressing their condolences to the victims and calling for steps to prevent such shootings, including restrictions on guns. Indiana Gov. Eric Holcomb, who was returning from a trip to Europe on Friday, issued a statement saying he and other state leaders were getting updates about the situation and that 100 state police officers had been made available to work with local law enforcement.

A statement from Jason Seaman the Noblesville West Middle school teacher who stopped the shooter. pic.twitter.com/qJgfDYGiKh

Familiar Face: Saluki coaches excited about what could be under Kill

CARBONDALE — No one knows how long Jerry Kill will be in charge of SIU's athletic department, but many Saluki coaches were excited to see what…

CARBONDALE — Battling 95-degree temperatures in a sleeveless white hoodie Friday, Jeremy Chinn was taking it all in at SIU's 7-on-7 team camp.

Things getting back to normal for Saluki hero Seaman

CARBONDALE — Jason Seaman threw out the first pitch at Wrigley Field, received a new car from a local dealership in Indiana and has visited wi…

Opinion | Voice of The Southern: Jason Seaman shows us what heroism really is

Jason Seaman didn’t wake up May 25 with the intention of being a hero.

The doctor who examined Dolphins QB Tua Tagovailoa has been fired

Jason Seaman, center, is pictured in a photo released by Saluki Athletics on Facebook.

Empty school buses leave after a shooting at Noblesville West Middle School in Noblesville, Ind., on Friday, May 25, 2018, in this photo from the Indianapolis Star. A male student opened fire at the suburban Indianapolis school wounding another student and a teacher before being taken into custody, authorities said.