The 5-foot-9, 194-pound sophomore settled in nicely, completing the first pass of the 2021 fall season for a 99-yard touchdown. Baker threw for a school-record 460 yards, in only three quarters of action, and had 235 yards and three touchdowns when he took a seat in the third quarter against Dayton last weekend. Entering Missouri Valley Football Conference action Saturday against Illinois State (2-1), Baker has completed 57 of 82 passes (69.5%) for 871 yards, seven touchdowns, and two interceptions, both off tipped balls.

He's one reason the No. 7/8 Salukis (2-1) feel good about their chances against the Redbirds in their conference opener. SIU's 55-3 win over Dayton was its first game without a turnover, and the Salukis hope the Family Weekend crowd at Saluki Stadium will give them another leg up. SIU has dropped five of its last six games against ISU and is 0-5 in MVFC openers under coach Nick Hill.

"It's one game at a time, and this game presents a lot of challenges, and we're excited for that," Hill said. "I think we just gotta continue to grow together."

With its oldest team in history (17 sixth-year seniors dot the Saluki roster), SIU was picked fourth in the MVFC preseason poll. The Salukis' 13 preseason all-conference honorees were more than any other league school.

ISU, which quit in the middle of the 2021 spring season after four games, beat Butler 49-7, lost 28-0 at Western Michigan, and held off Eastern Illinois 31-24 after starting quarterback Bryce Jefferson left the game with an injury. Freshman Jackson Waring came in for Jefferson, completed 5 of 7 passes, and ran for a crucial touchdown to lead the Redbirds to the win.

Here are three things to watch in Saturday's ISU-SIU game:

The strength of ISU's offense lies in its four running backs and offensive line. The Redbirds have allowed only five sacks in three games, and average 187 yards rushing a game. SIU's defensive line has been one of the strongest units on its team, not to mention its defense, and can help control the game for the Salukis if they're able to reach Waring with only a four-man rush.

Defensive end Kevin Glajchen has had a sack in all three of his first games after transferring to SIU from San Diego, and Anthony Knighton would love to set the school record against ISU. Waring would rather run it than throw it, and could create some problems if he's able to escape the pocket.

"Waring's a good athlete. He did a really good job," ISU coach Brock Spack said. "Take one play away and I think he had a really good night. The one fumble was a weird play, but, young quarterbacks have those moments, and he had his. Hopefully that's the only moment he has."

SIU has been balanced this season, with seven touchdowns rushing and eight passing, but might lead with the run game more against ISU. The Redbirds' real strength on defense is in their back seven, which features guys like linebacker Zeke Vandenburgh (20 tackles, 3.0 tackles for loss), cornerback Braden Price (18 tackles, 2 interceptions) and safety Clayton Isbell (13 tackles, 1 interception).

"Coach is a guy that's gonna pressure ya, that's gonna play some different things from odd and even fronts," Hill said. "They just do a great job of mixing things up. I think Clayton Isbell, if he's not on preseason accolades, he should be. I think he's one of the better boundary safeties that we'll see, and then I think (Vandenburgh) is an excellent player at linebacker. Up front, they've got physical guys."

SIU should get Romeir Elliott back from concussion-type symptoms last weekend, which took him out of the Dayton game, and have Justin Strong, Javon Williams Jr. and Donnavan Spencer in the backfield. ISU's Cole Mueller comes off a career-high 144 yards rushing against Eastern Illinois and averages 9.3 yards a carry entering Saturday's game. Kevin Brown (10 carries, 89 yards), Nigel White (18 carries, 76 yards, 2 TDs) and Pha'leak Brown (17 carries, 76 yards, 1 TD) will complement Mueller.

The biggest difference between the two teams? SIU's big-play threats in the passing game, and ISU's lack of weapons there this season.

The Salukis feature one returning All-American, Avante Cox, a transfer from Cincinnati in Jerron Rollins, a sixth-year veteran in Landon Lenoir, and an up-and-comer in Izaiah Hartrup in the receiver room. All four of them average over 10 yards a catch, and the quartet has combined for six of the team's eight passing touchdowns. The Redbirds had four first downs at Western Michigan, all on the ground, and have thrown for only two touchdowns all season. ISU has one pass play over 30 yards this season, a 44-yard pass to Austin Nagel.

CARBONDALE — Nic Baker knew he had a free play.

CARBONDALE — Illinois State is still big up front, as usual, but has a different kind of ground attack this season under 13th-year coach Brock Spack.

CARBONDALE — SIU football coach Nick Hill took two big positives from his squad's 55-3 win over Dayton on Saturday: no turnovers and the consi…

CARBONDALE — SIU punter Jack Colquhoun dropped the ball on his first attempt Saturday night against Dayton, but that was to be expected.

CARBONDALE — SIU's football team took one step forward and two steps backward most of the first three quarters against Illinois State, but cou… 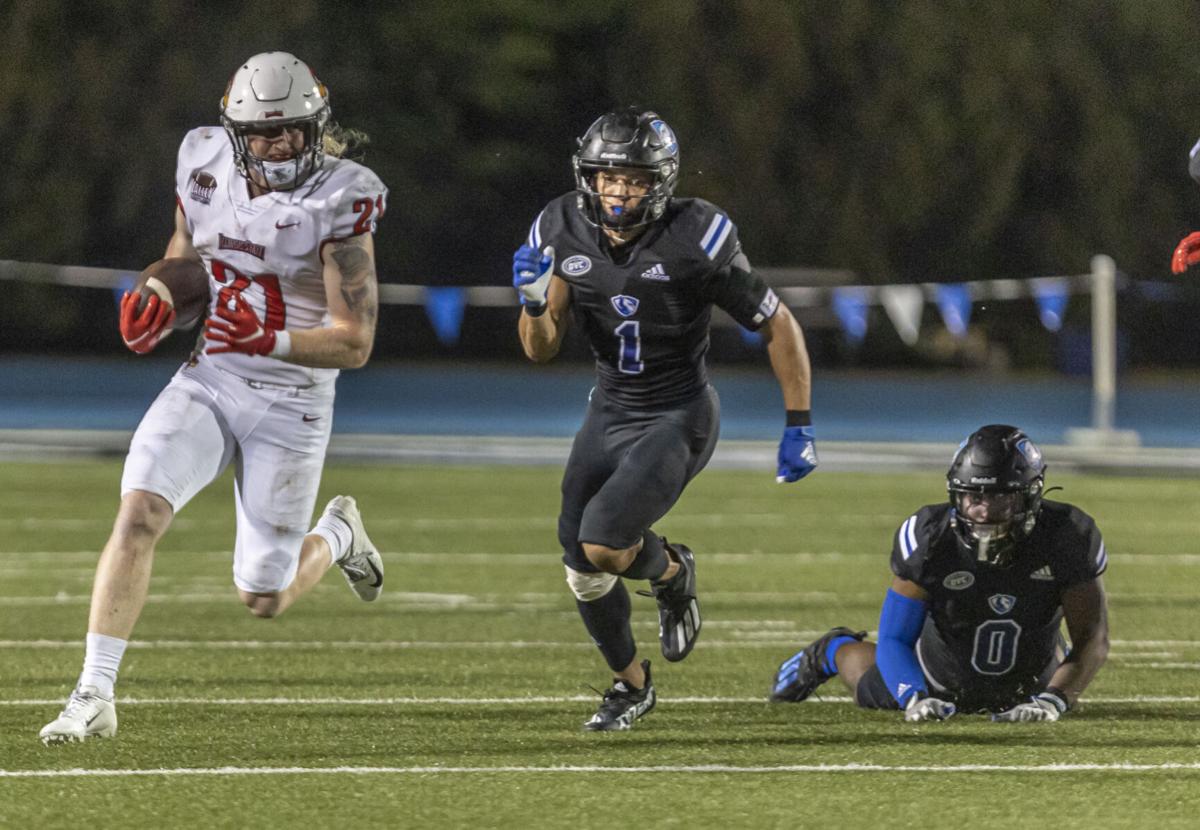 Illinois State running back Cole Mueller (21) runs on Saturday at O'Brien Stadium on the campus of Eastern Illinois University. Mueller rushed for a career-high 144 yards on 16 carries in the Redbirds' 31-24 win over the Panthers. 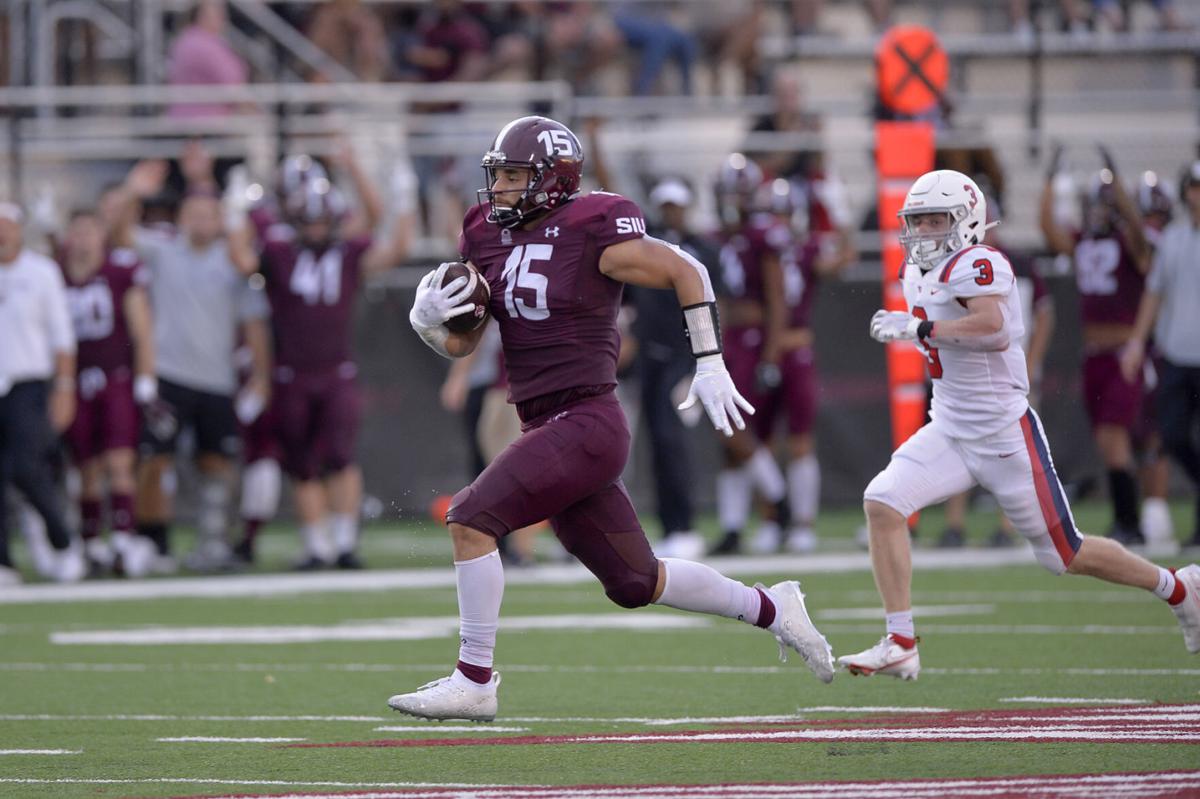 SIU running back Javon Williams Jr. (15) heads to the end zone on a 73-yard touchdown run during the first quarter against Dayton at Saluki Stadium on Saturday in Carbondale. 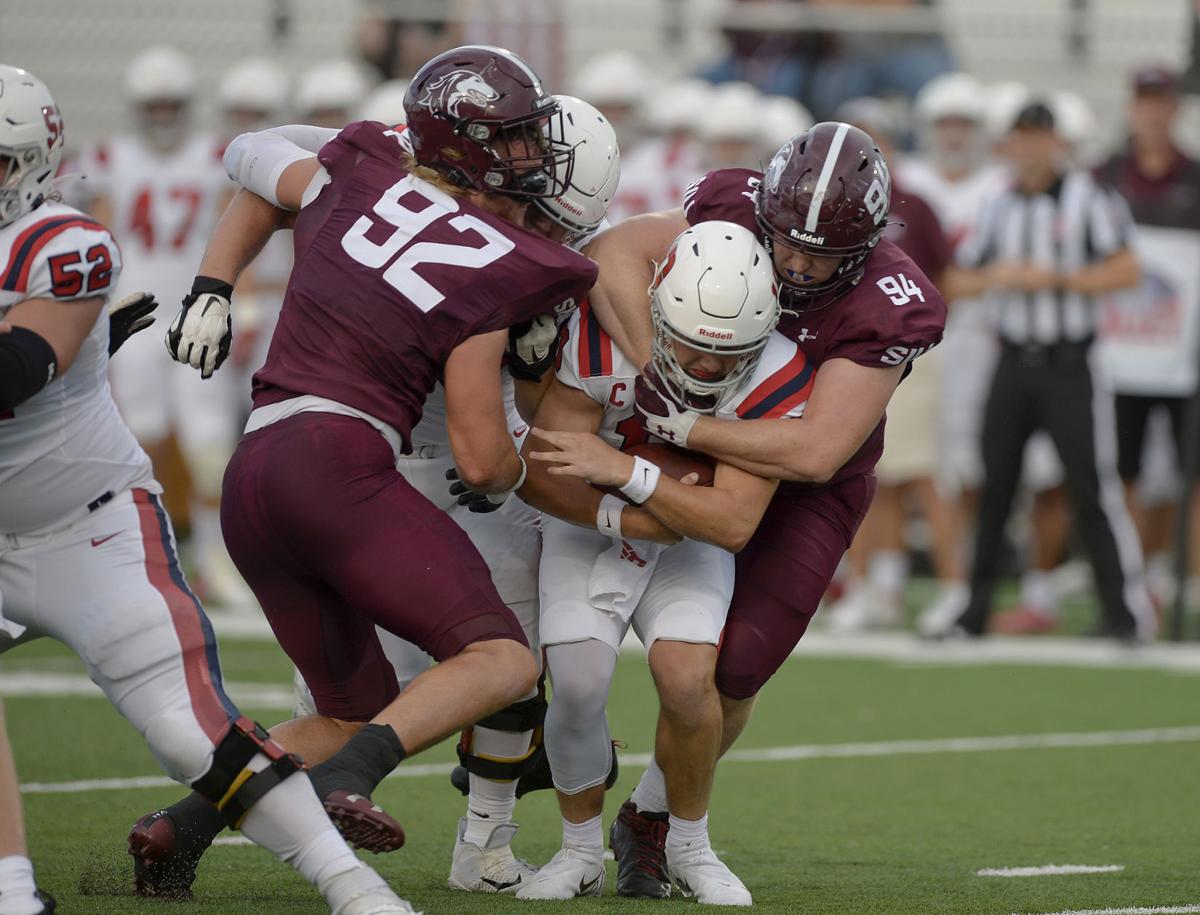