Become a Member
Read Today's E-edition
Share This
MVC Basketball | Faced with ISU renovation, Schertz not far off
0 comments
Share this
1 of 3 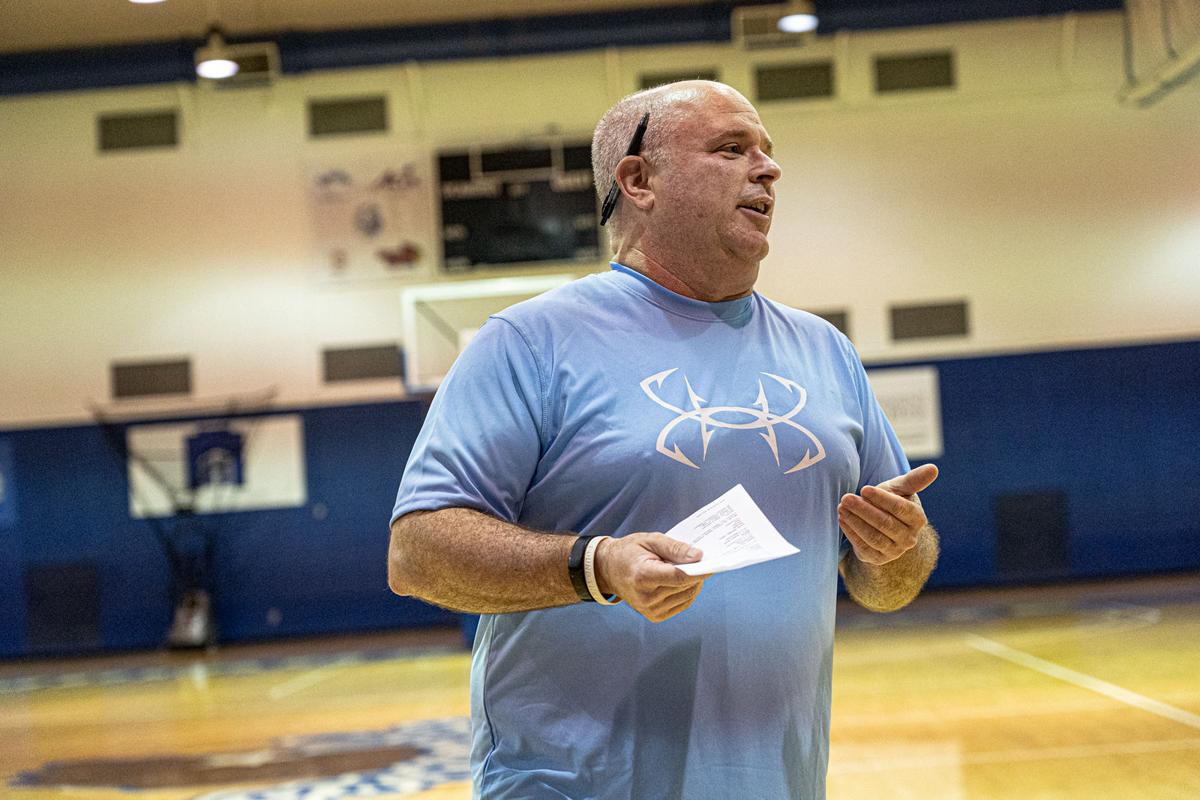 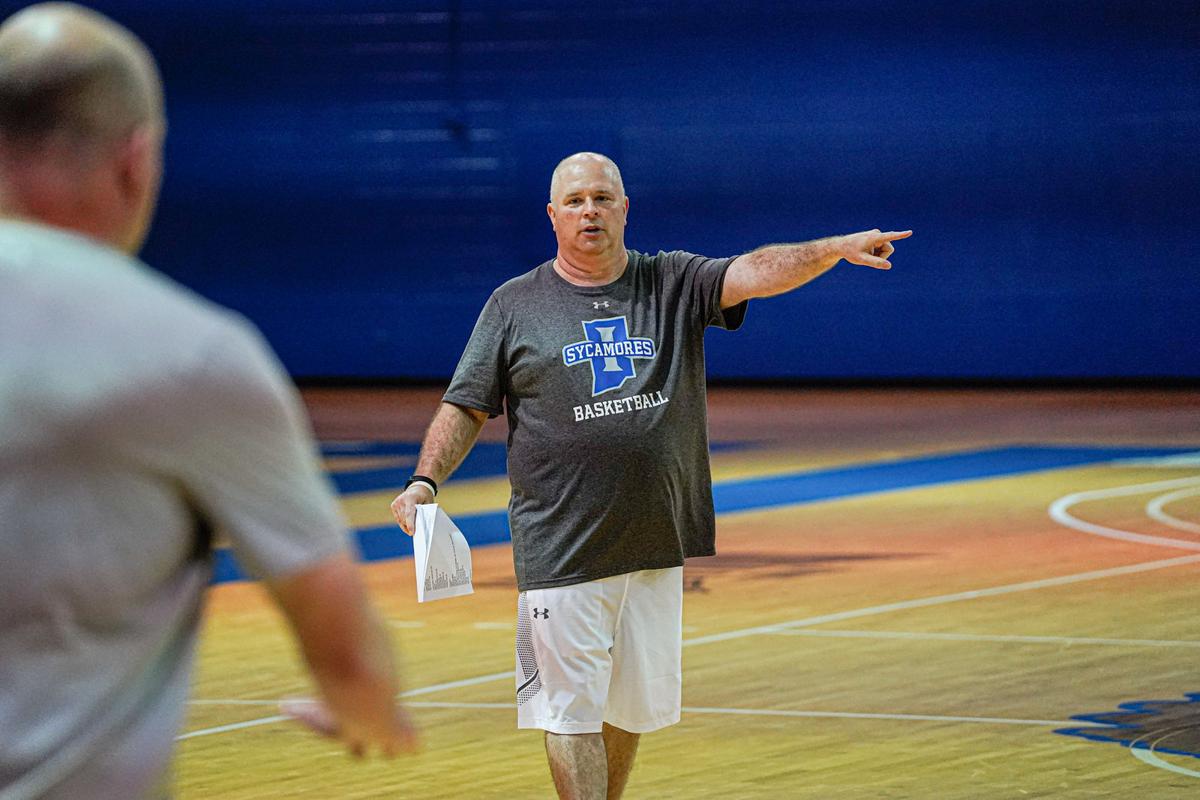 Josh Schertz, Indiana State's new men's basketball coach, directs traffic during a summer workout. Schertz was a four-time national coach of the year at Division II Lincoln Memorial University in Tennessee. He won more than 83% of his games in 13 years there, and made 10 NCAA Tournament appearances. 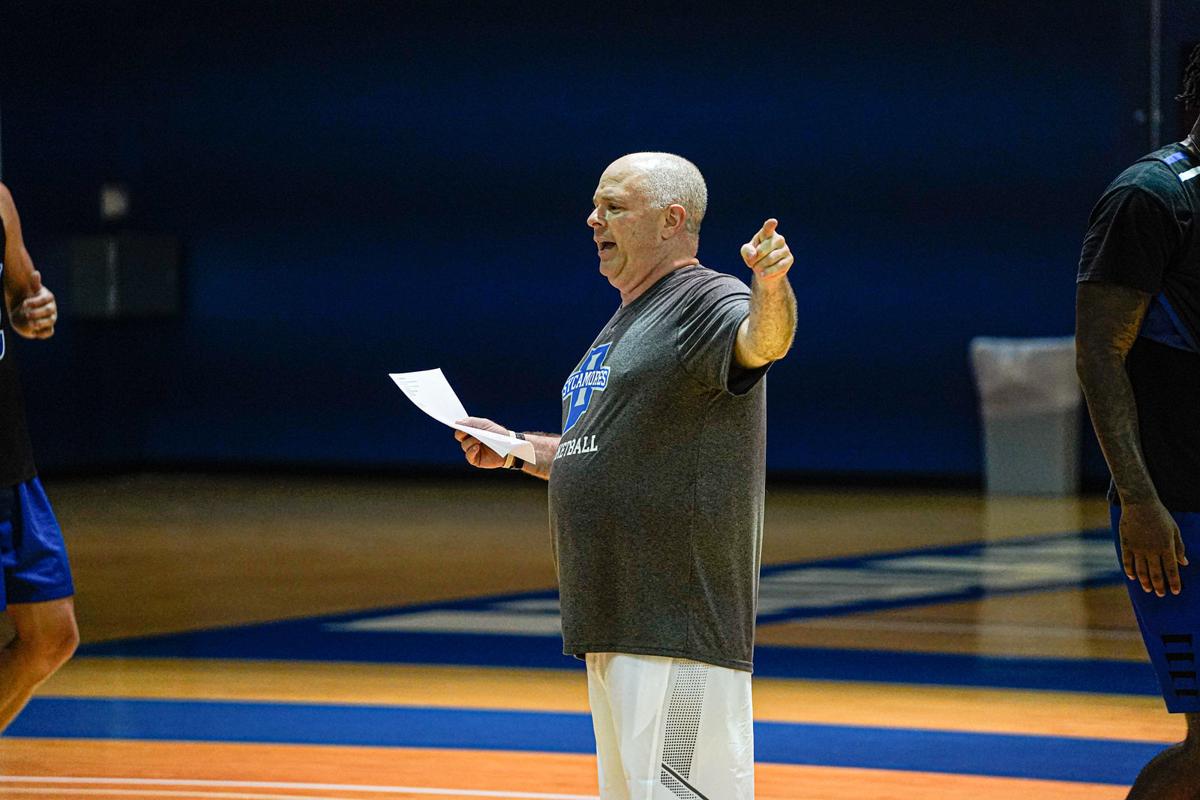 CARBONDALE — Josh Schertz is more than 700 miles from his native Brooklyn, where he grew up as a nationally-ranked tennis player before moving to Florida at the age of 12.

He eventually gave up tennis and graduated high school without a basketball scholarship offer, because he wasn't necessarily looking for one. Schertz, who was hired by Indiana State as its new men's basketball coach earlier this year, found one after playing in a pickup game in front of an assistant coach at County College of Morris in New Jersey. Schertz later played at Weber International University in Florida, then Weber College, and Piedmont College in North Carolina before spending his senior year as a grad assistant at Florida Atlantic.

After 13 years at Division II Lincoln Memorial University, four national coach of the year honors and 10 NCAA Tournament appearances, Schertz is jumping into another journey in Terre Haute, Indiana. The Sycamores return three starters off last season's 15-10 squad that finished fourth in the Missouri Valley Conference, one of them first team all-conference guard Tyreke Key, but the new staff faces a renovation project. Forwards Jake LaRavia and Tre Williams, two of the most promising young players in the league, left after Greg Lansing was fired, but Schertz was able to bring three former players with him.

"It's a unique challenge, right? You're coming in, and you have three players from LMU, and they have a general idea of what we want to do, but, even so, there are small tweaks you make depending on personnel, so it's never a cookie-cutter, in terms of what you're trying to do," Schertz said. "Because you're trying to take advantage of a team's strengths, individually and collectively, certainly with your best player. Every year that's going to be a little bit different."

Xavier Bledson, a 6-foot-6, 215-pound sophomore guard, 6-11 redshirt freshman forward Simon Wilbar and 6-6 guard Cameron Henry came the 391 miles from Harrogate, Tennessee, with Schertz to the Hulman Center. Bledson led LMU with 113 assists last season (he was one of five players on the squad with more than 50), shot 60.5% from the field and averaged 10.5 points and 4.3 rebounds per game. The Gainesville, Georgia native shot 88.8% at the free-throw line for the Railsplitters, who closed a 19-4 season with an 87-86 loss to top-seeded West Texas A&M in the Final Four.

Wilbar played in only 12 games last season. Henry, a redshirt junior from Chesterfield, Virginia, was one of only three players that started all 23 games last season. He averaged 15.1 points and six rebounds per game, with 98 assists, 69 turnovers and 45 steals. All three are teaching as much as listening as Schertz and his staff attempt to bring a high-scoring style that produced 92.4 points per game to a league that's traditionally won in the half-court.

"For me, it was a chance to come in and challenge myself, and see if we can kinda build something here in the same vein as we were able to do at Lincoln Memorial," Schertz said. "So, again, you never know until you get in and you do it, but that was a big part of what attracted me here. I'd had some chances to leave LMU and be a head coach at D1. They didn't fit for various reasons. But, a big part of why this fit, was I have so much respect for the conference, and the coaches in this conference, and I felt like, however long this goes, five years, six years, I'm going to be a better coach after competing with these guys."

ISU may have the talent to finish in the top half in Schertz's first season, but the Sycamores might not have enough time to get it all together.

"The way we play is a little bit different, and so much of it is based on the ability to read the game, and read each other," Schertz said. "And that comes with repetitions. One thing we had at LMU that we won't have here, this year, is corporate knowledge and continuity."

While way overdue, by passing new laws allowing college athletes to profit off their name, image and likeness, the NCAA and state of Illinois …

CARBONDALE — SIU women's basketball coach Cindy Stein announced Friday that she will retire at the end of the 2021-22 season.

Watch now: Bears and Browns, by the numbers

Watch now: Bears and Browns, by the numbers

Josh Schertz, Indiana State's new men's basketball coach, directs traffic during a summer workout. Schertz was a four-time national coach of the year at Division II Lincoln Memorial University in Tennessee. He won more than 83% of his games in 13 years there, and made 10 NCAA Tournament appearances.