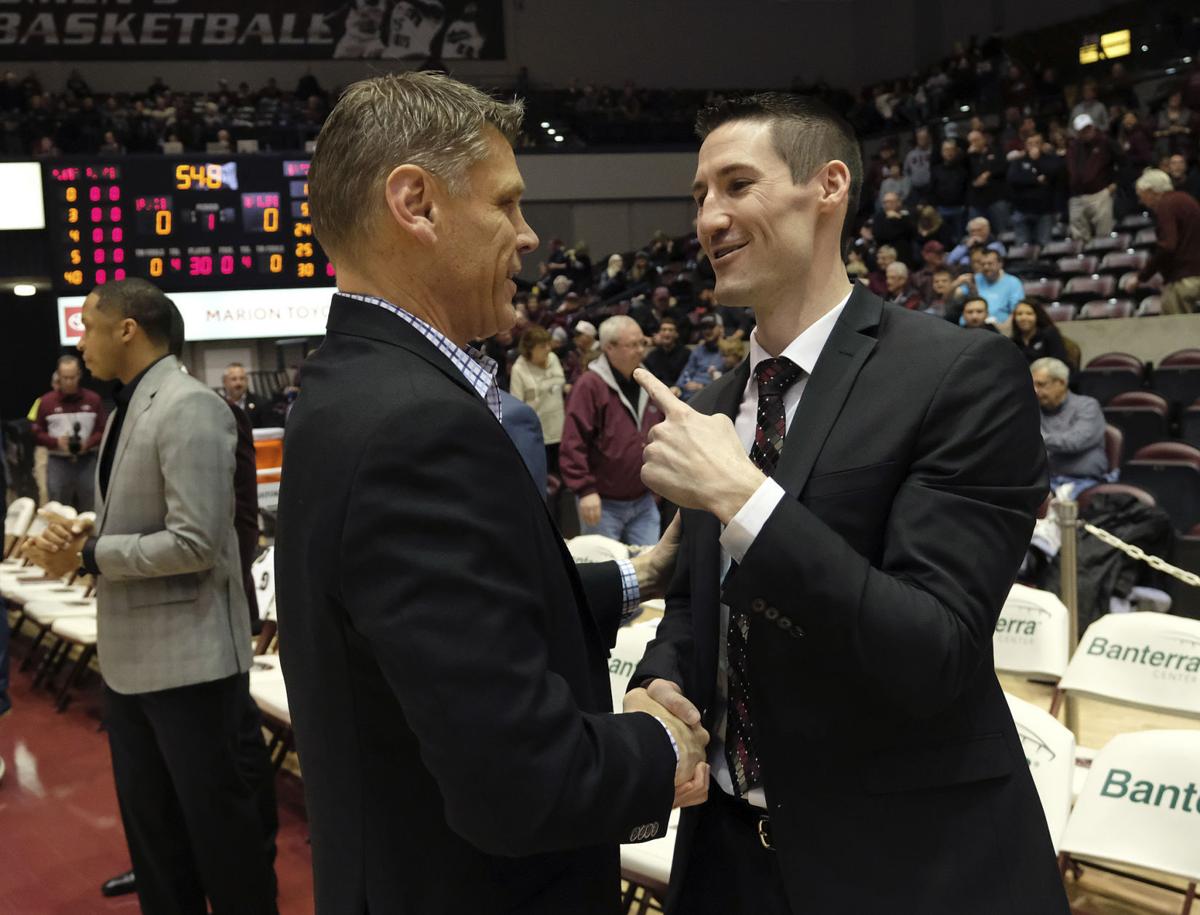 Loyola head coach Porter Moser (left) and SIU head coach Bryan Mullins talk before their team met up at the Banterra Center in Carbondale. Mullins was an assistant under Moser. 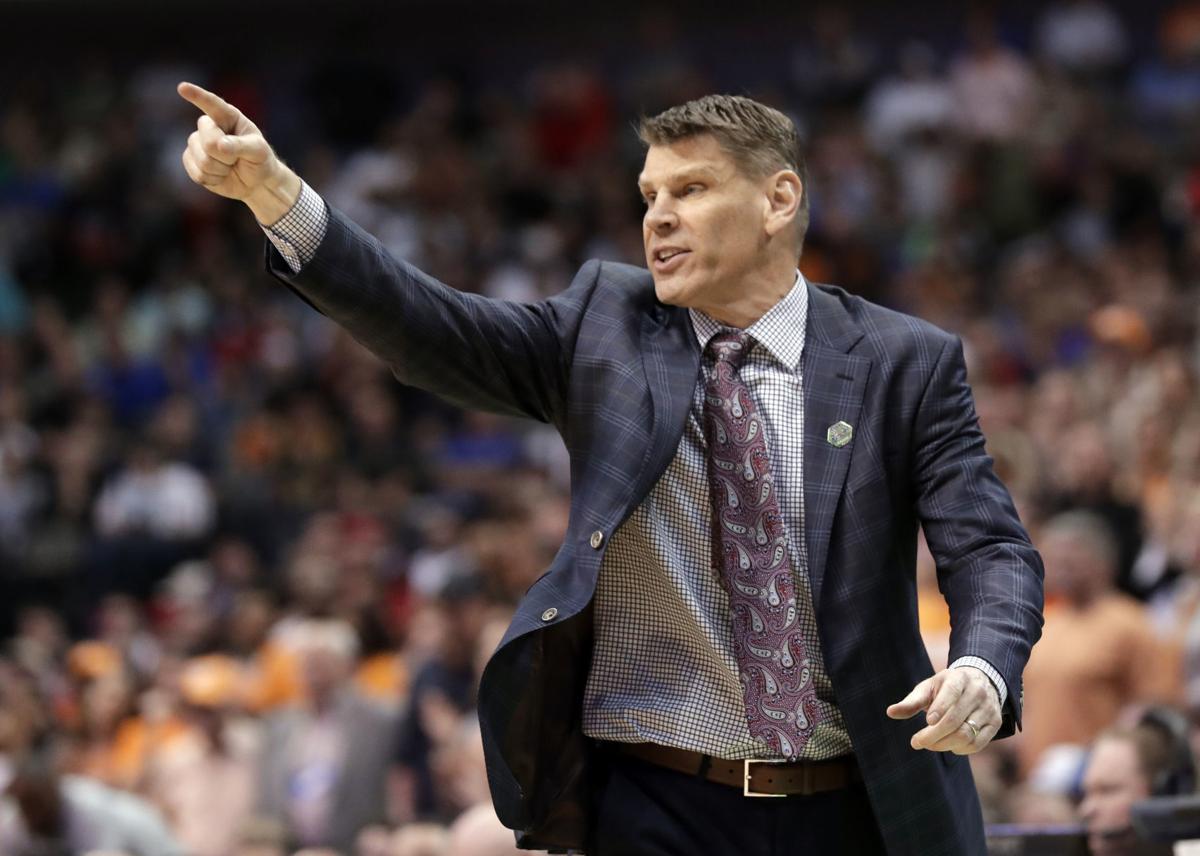 In this Saturday, March 17, 2018 file photo, Loyola-Chicago coach Porter Moser gestures to his team during the second half of a second-round game against Tennessee at the NCAA men's college basketball tournament in Dallas. 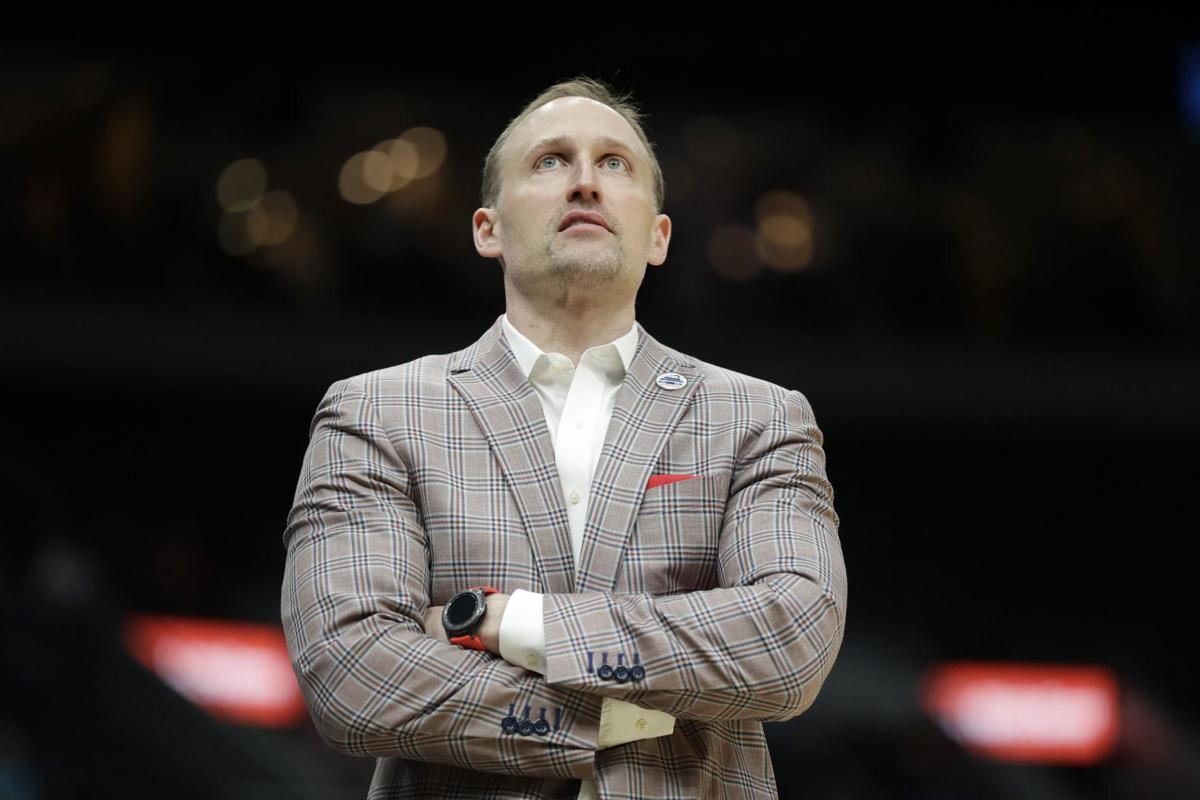 llinois State men's basketball coach Dan Muller watches on the sidelines Thursday, March 5, 2020, during the first half of the Redbirds' Missouri Valley Conference Tournament game against Drake in St. Louis. 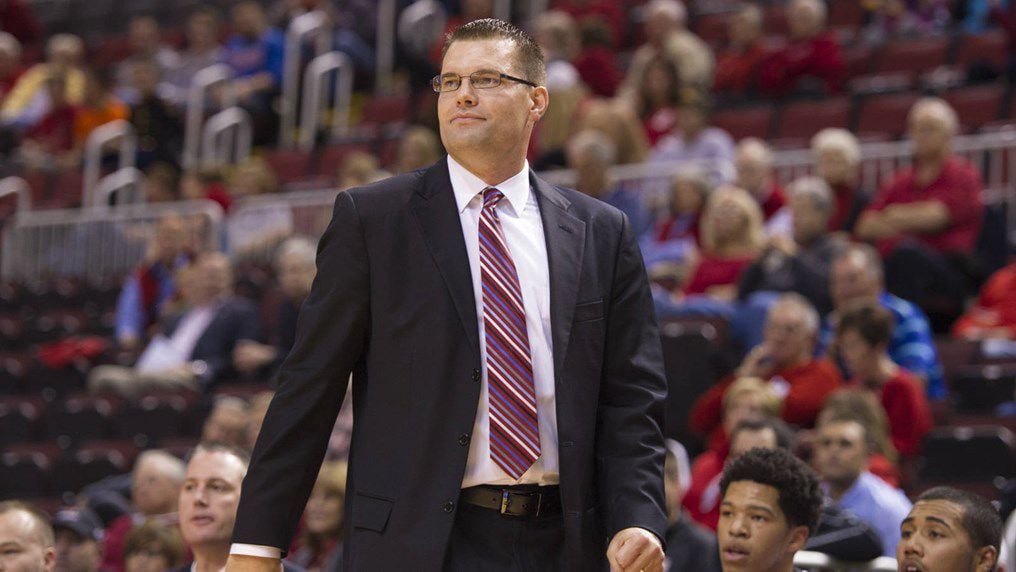 Bradley men's basketball coach Brian Wardle took the Braves to three straight 20-win seasons after starting 5-27 in 2015-16. Wardle said a big reason for his success has been the continuity of his staff. Assistant coaches Drew Adams, Mike Bargen and Jimmie Foster have been with him through the entire turnaround.

This year has been different for Muller for a number of reasons, with the coronavirus, the truncated schedule, and a roster with nine newcomers. This year is also the first time in his eight seasons he's had the same three assistant coaches as the previous year.

"I kind of knew the value of it, but since this is the first time I've had everyone back, now I really know the value of it," Muller said. "It's not even the Valley, it's teaching everybody how you do things, how you want to do things. Little things like going on the road and what every drill is called. How do I react in games? How can you help me the most?"

Muller, a former Redbird who led ISU to its last NCAA Tournament appearance in 1998 as a player, has done well despite the turmoil of nine new faces in the last five years. ISU tied for the Missouri Valley Conference regular-season title in 2017 with Wichita State and reached the league tournament finals three times (2015, 2017 and 2018).

He is coming off the worst season in his tenure as the head coach at his alma mater, a 10-21 disaster that dropped the Redbirds into the opening round of the Valley Tournament for the second straight year. This time, he won't have to teach anyone on his staff new terminology.

"It's a complicated job because you're in the foxhole, it's under pressure, and things like that, and then the most important part is the continuity with your players," Muller said. "Guys you've recruited. Guys you've built relationships with. You can do it quickly, but, again, there's no substitute for experience together."

Assistant coaches leave for a variety of reasons. Some leave the industry. Some chase higher salaries and higher-level leagues. Some leave to become head coaches, as three have done under Muller the last five years, although only one of them went directly from Normal into the biggest chair. Brian "Penny" Collins left the Redbirds in 2018 to take over Tennessee State's program. Former assistant coaches Luke Yaklich (Illinois-Chicago) and Jeremy Ballard (FIU) are currently head coaches.

No current head men's basketball coach in the Valley saw more turnover in the last five years than Muller. Longevity in staffs isn't always a guarantee of success, any more than the amount of fifth-year seniors over the last five years.

Northern Iowa coach Ben Jacobson, the dean of the league in his 15th season with the Panthers this season, has had the same three assistant coaches since 2012. P.J. Hogan, a Dubuque, Iowa, native, was a graduate assistant at UNI from 2003-05 and joined the program a year before Jacobson got there in 2006. Jacobson hung on to him. Former Panther forward Erik Crawford joined his alma mater in 2011, and associate head coach Kyle Green began his third stint with the program in 2012.

All three have deep ties to Cedar Falls, Iowa. Green's son, A.J., was last season's MVC Player of the Year, and his daughter, Emerson, is a freshman on the UNI women's basketball team this season. Green's wife, Michele, is a local chiropractor.

Jacobson, a four-time MVC Coach of the Year, led the Panthers to four NCAA Tournament appearances and was close to either an NIT berth or an at-large bid to the Big Dance in March before COVID-19. Last season's 25-6 club was UNI's first with a winning record in four years. The Panthers went 14-16 in 2016-17, the program's only losing season under Jacobson, and finished tied for seventh place in the Valley in 2018 after going 16-16 overall and 7-11 in the league.

Valparaiso coach Matt Lottich has had seven different assistant coaches since 2015, and helped the Crusaders reach the finals of the MVC Tournament in only the second year with his current staff.

"Look at Valpo's transition," Lottich said. "We dominated the (Horizon) League. And I know it was a much lower-ranked league, but it took us, we recruited a certain way for that league. I don't think any of us understood the change, and how different it was going to be, and it was different. We just went through that as an institution, and you have that for a staff."

Bradley has been the exception the last five years, building up from a five-win team in 2015-16 to three straight 20-win seasons. The Braves won the MVC Tournament in 2019 for their first NCAA Tournament bid in 13 years, and won it again in March. Bradley coach Brian Wardle thanked his school's administration for keeping their program competitive, money-wise, for assistants Drew Adams, Mike Bargen and Jimmie Foster, and said the trio took ownership of the turnaround as much as the players.

"All three of my assistants have been approached about other jobs, but I think we've done a really good job here at Bradley, they know they have ownership of this program," Wardle said. "They've been a part of the rebuild, and they know that what they do every day is valued and appreciated, and that type of environment has made them feel like they want to see this thing even another step forward, and I'm very blessed and lucky."

SIU coach Bryan Mullins, an assistant coach on Porter Moser's staff that went to the Final Four in 2018, said after the initial adjustment period, new faces can be beneficial.

"Everyone's different, and there's so many different ways to coach," Mullins said. "Everyone has a little bit different style. That first year you're always feeling each other out a little bit, and then you get comfortable. I think that's when the program can really take off. I always felt the best years as a player, the best years as a team was when we had the best staff. I think it's so important to have a great staff, because it's the staff that allows your program to have some success."

CARBONDALE — Shortly after the coronavirus pandemic eliminated their teams' last chances for an NCAA postseason, the Missouri Valley Conferenc…

Valparaiso men's basketball coach Matt Lottich is not sure what he will do if Indiana is still on the travel quarantine list for Chicago when the Crusaders are scheduled to go play Loyola on Jan. 30.

Salukis to take on Cardinals, Prairie View A&M and Winthrop in Louisville

CARBONDALE — SIU's men's basketball team doesn't know when, or where, it will end the 2020-21 season, but now it knows where it'll start.

CARBONDALE — SIU's men's basketball team might feel a bit out of place at the nine-team Louisville bubble event later this month.

Drake men's basketball coach added two players for his 2021-22 squad, one of them a four-star wing he knows well, the other a talented guard f…

Northern Iowa and Loyola could lead another two-horse race for the Missouri Valley Conference regular-season title this season, but when it comes to the most important four days of the year, expect more turmoil.

Loyola head coach Porter Moser (left) and SIU head coach Bryan Mullins talk before their team met up at the Banterra Center in Carbondale. Mullins was an assistant under Moser.

In this Saturday, March 17, 2018 file photo, Loyola-Chicago coach Porter Moser gestures to his team during the second half of a second-round game against Tennessee at the NCAA men's college basketball tournament in Dallas.

llinois State men's basketball coach Dan Muller watches on the sidelines Thursday, March 5, 2020, during the first half of the Redbirds' Missouri Valley Conference Tournament game against Drake in St. Louis.

Bradley men's basketball coach Brian Wardle took the Braves to three straight 20-win seasons after starting 5-27 in 2015-16. Wardle said a big reason for his success has been the continuity of his staff. Assistant coaches Drew Adams, Mike Bargen and Jimmie Foster have been with him through the entire turnaround.