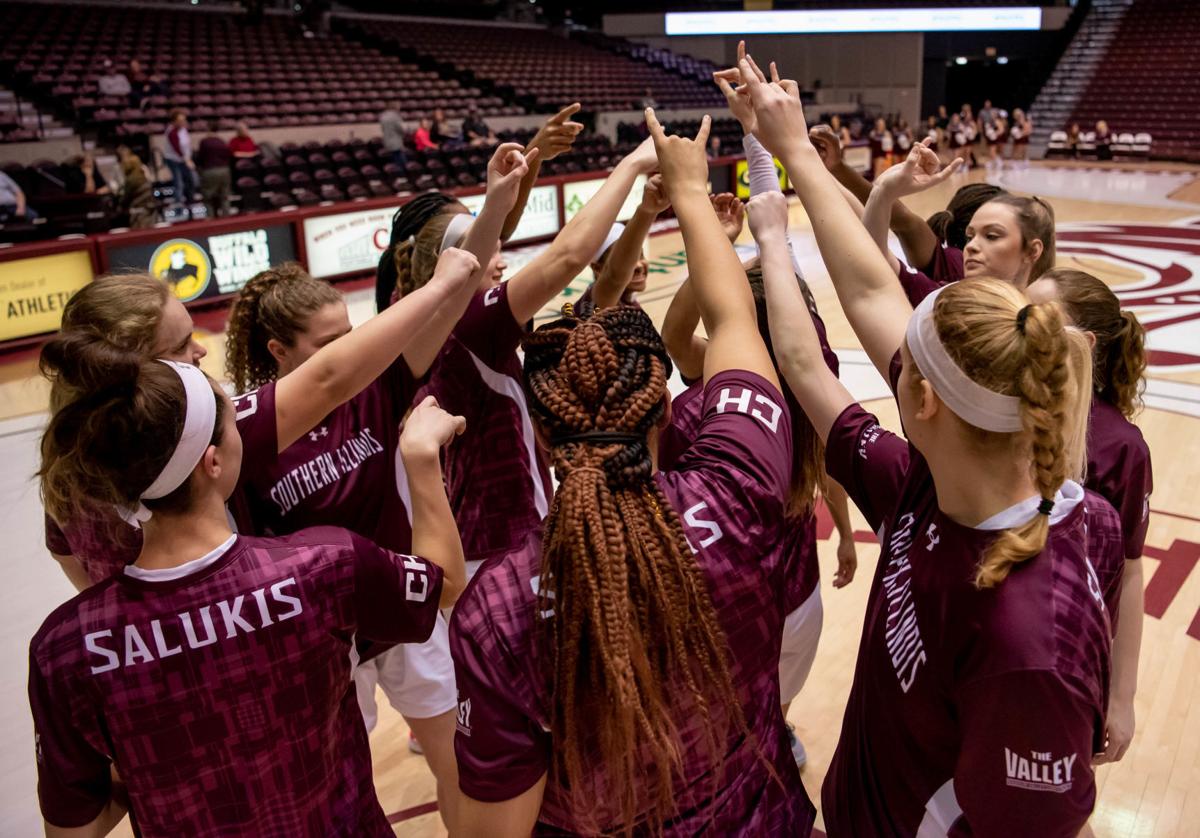 The Southern Illinois Salukis huddle up on Thursday, March 5, 2020, before a game against the Loyola Ramblers at the Banterra Center in Carbondale. 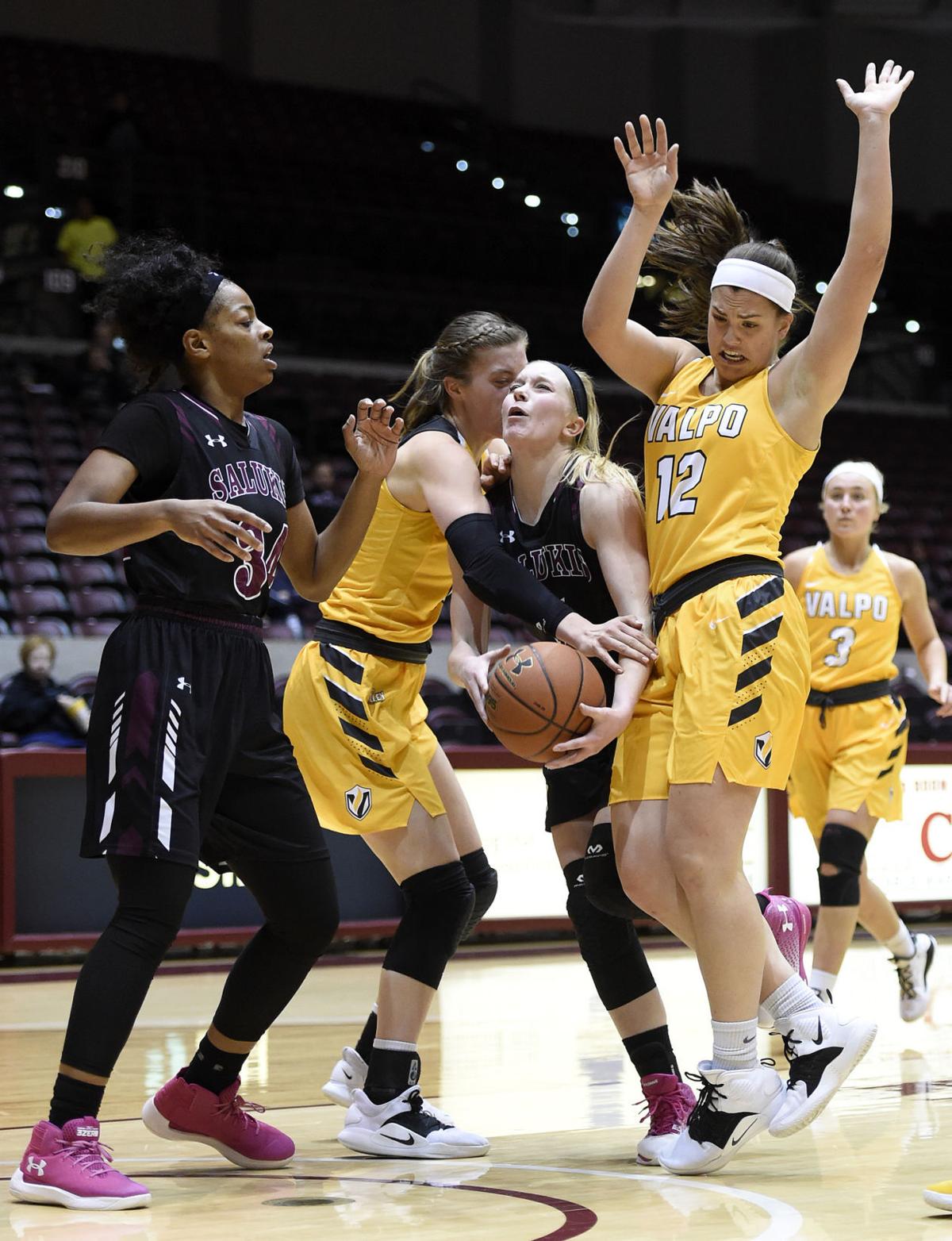 SIU guard Caitlin Link (5) is fouled by Valparaiso forward Ella Ellenson (13) as she goes to the basket during the first half at SIU Arena last season in Carbondale.

Bigs. Smalls. Ones. Threes. Fours. And even though Saluki coach Cindy Stein would rather see her shooting a 3-pointer or driving the lane, you might just see the 5-foot-10 junior post up at the other end.

"Our offense changed a little bit this year, where everybody can play every position," Link said. "Obviously, with everything going on, you're not going to know if you're going to have every post player, or every point guard, so every position is interchangeable. So, that makes it easier to drive, easier to penetrate, easier to pass, easier to post up. It's a lot more flexible offense this year. For me, as a point guard, it's more fun, it's more enjoyable. I think our team's doing really well with it."

Link and the Salukis are eager to make something good out of a frustrating 2020. SIU's 16-13 season in 2019-20 ended before it took the court at the Missouri Valley Conference Tournament in Moline. Forward Nicole Martin, the program's eighth all-time leading scorer (1,404 career points) and 10th-leading rebounder (711) signed to play professionally in Switzerland. Point guard Brittney Patrick, a member of the MVC All-Defensive Team last season, is gone after starting all 29 games last season.

Silvey, junior Payton McCallister (4.1 points, 1.3 rebounds per game last season), freshman Quierra Love and Link are the top candidates to connect the Salukis' backcourt to its frontcourt. Silvey, the Valley's seventh-leading scorer, made 60 of 173 from behind the 3-point arc (34.7%), the fifth-most triples in the league. McCallister sank 29 of 84 behind the arc (34.5%) in 29 games.

Link averaged 9.7 minutes per game in 29 appearances as a sophomore, and is eager to step into a bigger role.

"As a point guard, my job is to start the offense and get the touches to people like Makenzie Silvey and Abby Brockmeyer, but I know if I have that open 3, I gotta knock it down," Link said. "And if I got a lane to the basket, I'm gonna take it, but at the same time, I gotta know where my shooters are, where Abby's at, Gabby, Awa, the people that need the most touches, I have to know where they're at at all times."

Stein, 106-108 in seven years at SIU, believes Link can help lead the Salukis back into contention. With five returning starters last season, they finished in the bottom four of the MVC for the first time 2014, Stein's first season here.

"The thing that has always been great about Caitlin ever since she's stepped on campus is she's always been a natural leader," Stein said. "She's one of those super positive kids who always sees the rosy side. She's a great spirit, but she's playing hard. She's shot the 3 pretty well. She's taking care of the ball, so, she's one of the kids that's been a consistent green light shooter."

As a senior, Link had to take the reins a bit more without Moschkau, who went on to play for Stanford. Link averaged 20.4 points, seven rebounds, 4.1 assists and 3.3 steals per game in her final prep season. She looked at the University of Denver, Lehigh, Miami of Ohio, Northern Illinois and Eastern Illinois before signing with SIU. Link was all-conference in volleyball her last two years and an elite runner, earning several Division I offers to run track. She won the state championship with her 3,200-meter relay team as a freshman, finished second in the 3,200 relay as a junior and took fourth in the 800 run.

Link's mom, Kelly, is a member of the Division III Wisconsin-Whitewater Hall of Fame for cross country and track. She is the third Division I athlete in her family, as her sister, Courtney, runs at Saint Louis and her brother, Cody, played football at Northwestern.

Link always loved basketball more than anything else, because of the team aspect. Whether it has her playing the point, the shooting guard, or somewhere in the paint.

"That's the one thing I didn't care about in track. It was very individual, and I loved that with basketball," Link said. "It's a long game, so, obviously, you're going to have a lot of failures, but there's a lot of times where you can pick yourself right back up, and catch right back up."

No. 24 Missouri State picked to repeat

Franklin was named to the Becky Hammon Mid-Major Player of the Year Award watch list earlier this week. The second player in program history to grab at least 500 rebounds as a sophomore, Franklin led the Valley in rebounding last season and ranked in the top 10 in the league in blocks (34), steals (48) and field goal percentage (56.3%). MSU is scheduled to open the season Nov. 27 at Florida Gulf Coast.

Junior Lasha Petree, a 6-foot guard from Detroit, is one or four starters back for former Saluki assistant coach Andrea Gorski's Bradley squad. Petree, the preseason Player of the Year in the Valley, led the league in blocks, with 50 in 29 games, and was fourth in scoring (16.5 ppg.) and 3-pointers (67). She is attempting to be the first player in Braves women's basketball history to win the MVC Player of the Year Award.

Petree and senior guard Gabi Haack, who joined her on the preseason all-conference team, helped the Braves win a program-record 22 games last season. They are two of three players back who all averaged 10 points or more (senior Nyjah White averaged 10.8 ppg.). Bradley led the MVC in scoring defense last season, allowing 62.1 points per game, and was third in offense (70.5 ppg.).

Saluki women to play at Memphis, Illinois and Compass Challenge in non-conference

CARBONDALE — When the NCAA Division I Council eliminated exhibition games and closed scrimmages this season, it actually helped SIU's women's …

CARBONDALE — Shortly after the coronavirus pandemic eliminated their teams' last chances for an NCAA postseason, the Missouri Valley Conferenc…

The Southern Illinois Salukis huddle up on Thursday, March 5, 2020, before a game against the Loyola Ramblers at the Banterra Center in Carbondale.

SIU guard Caitlin Link (5) is fouled by Valparaiso forward Ella Ellenson (13) as she goes to the basket during the first half at SIU Arena last season in Carbondale.