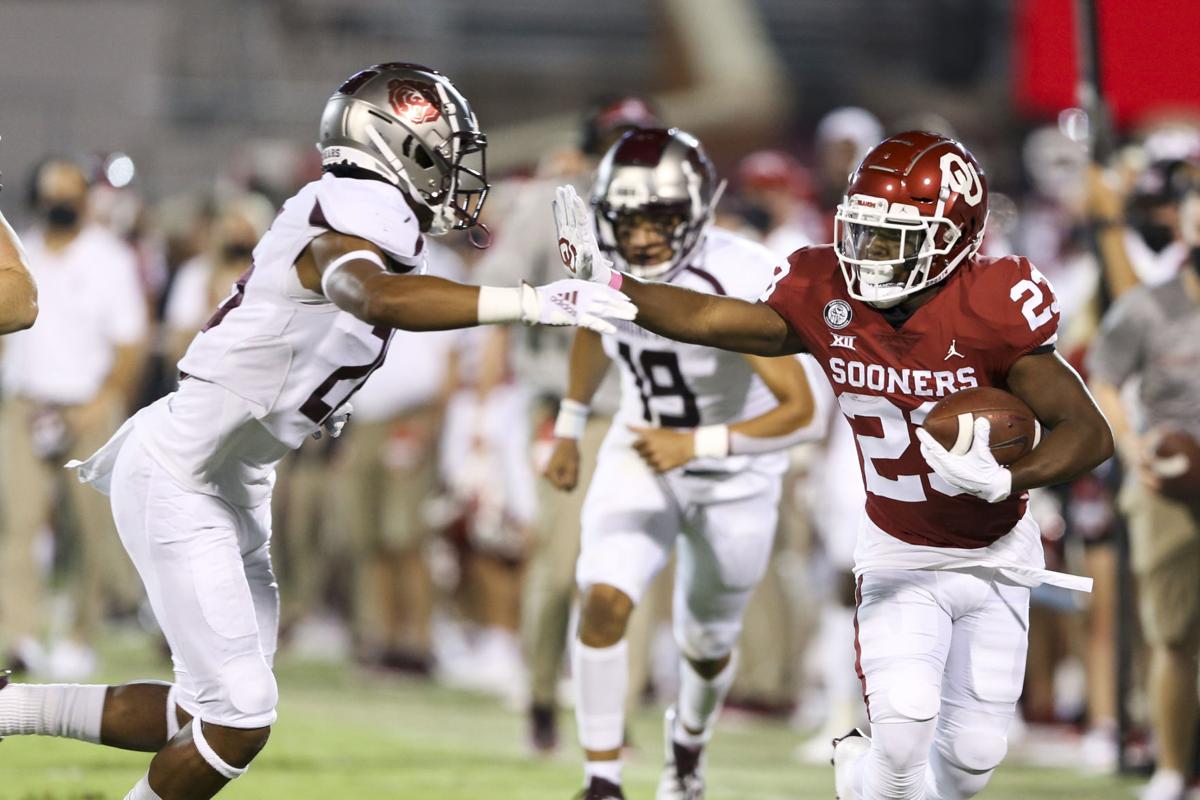 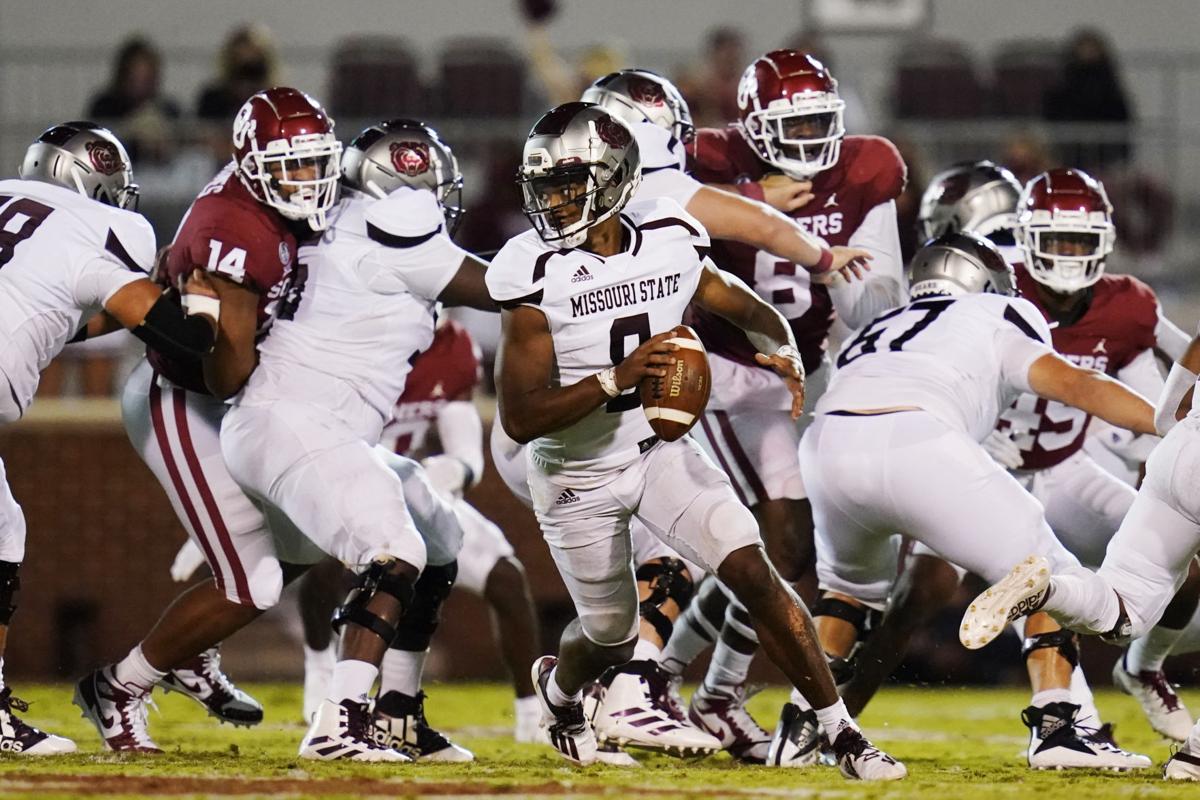 Missouri State quarterback Jaden Johnson (8) scrambles in the second half of an NCAA college football game Sept. 12 against No. 5 Oklahoma in Norman, Okla. 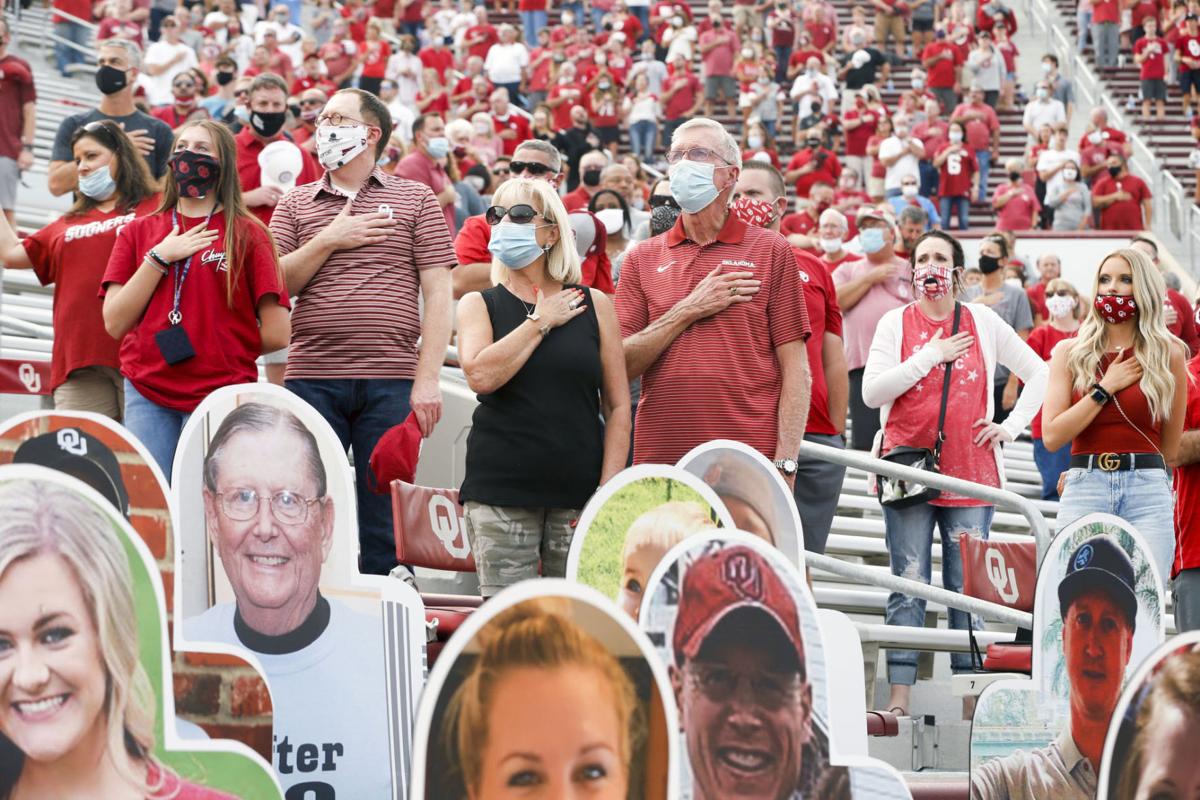 With cutout fans in front of them, Oklahoma fans place their hands over their hearts during the playing of the national anthem before the Sooners' game against Missouri State in Norman, Okla., Saturday.

NORMAN, Okla. — Spencer Rattler passed for 290 yards and four touchdowns in his first start and No. 5 Oklahoma rolled past Missouri State 48-0 on Saturday night.

Rattler, the highly touted redshirt freshman from Phoenix, only played the first two quarters and helped the Sooners take a 41-0 lead.

Rattler nearly didn't the chance to make his long-awaited splash. According to a report in the Springfield News-Leader, Missouri State president Clif Smart told the school's board of governors that the game had been in jeopardy because of Oklahoma's positive COVID-19 cases. Oklahoma coach Lincoln Riley confirmed it after the game.

Rattler took advantage of the opportunity and looked like a seasoned veteran. He completed 14 of 17 passes and had a 303.3 passer efficiency rating — the third-best single-game mark in school history.

"I feel like I've earned a lot of trust from my guys on the team," he said. "Being the quarterback, you have to have that assertive leadership and bring certain qualities to you, and I feel like I'm still working on that, but doing a pretty good job with it."

"I think his presence in the pocket, being able to find the open receiver — he's got a great quick release and can make all the different throws," Petrino said.

Rattler got plenty of help. Seth McGowan, a true freshman, caught a touchdown pass and ran for a score. Charleston Rambo had four catches for 80 yards and two scores, including a 53-yard touchdown catch from Rattler. Oklahoma gained 608 total yards, including 484 passing.

The Sooners held Missouri State to 135 yards and seven first downs in their first shutout since 2015.

Redshirt freshman Jaden Johnson completed 9 of 19 passes for 72 yards for the Bears.

It was a rough debut with the Bears for Petrino, best known for his success at Louisville and Arkansas. He took over a Missouri State program that went 1-10 last season.

"First and foremost, Oklahoma's a really good football team," Petrino said. "Obviously, one of the best teams in the country. We got a little overwhelmed up front on the offensive side of the ball."

Missouri State: The Bears were nowhere near ready for this level of competition.

Oklahoma: The Sooners' passing game looked crisp. Rattler's ability to complete the deep ball coupled with his mobility will give defensive coordinators fits. Oklahoma's defense was aggressive and tackled well to start its second year under coordinator Alex Grinch. The Sooners held the Bears without a first down for nearly 25 minutes to start the game.

None. Oklahoma what was expected and most of the teams ranked ahead of the Sooners did not play on Saturday. Top-ranked Clemson, the only one that did, rolled past Wake Forest 37-13.

Oklahoma players who were out included kicker Gabe Brkic and running back T.J. Pledger. Brkic was a preseason second-team All-American. Pledger was listed as the starting running back. Anton Harrison, a true freshman who was listed as the starting left tackle, also did not play. Riley did not say why they were out. He said earlier in the week that the team would no longer provide testing data.

Oklahoma limited seating to 25 percent of capacity, therefore making its sellout crowd of 22,700 its smallest since Nov. 10, 1945.

Still, the fans affected the game.

"I was surprised," Petrino said. "They had a lot of fans. I didn't know there would be that many people in the stands. I watched some other games earlier in the day and Thursday night, and it didn't seem like anybody had as many fans as they had at the game. It surprised me a little bit. It was a little bit louder than we thought it was going to be."

Missouri State quarterback Jaden Johnson (8) scrambles in the second half of an NCAA college football game Sept. 12 against No. 5 Oklahoma in Norman, Okla.

With cutout fans in front of them, Oklahoma fans place their hands over their hearts during the playing of the national anthem before the Sooners' game against Missouri State in Norman, Okla., Saturday.