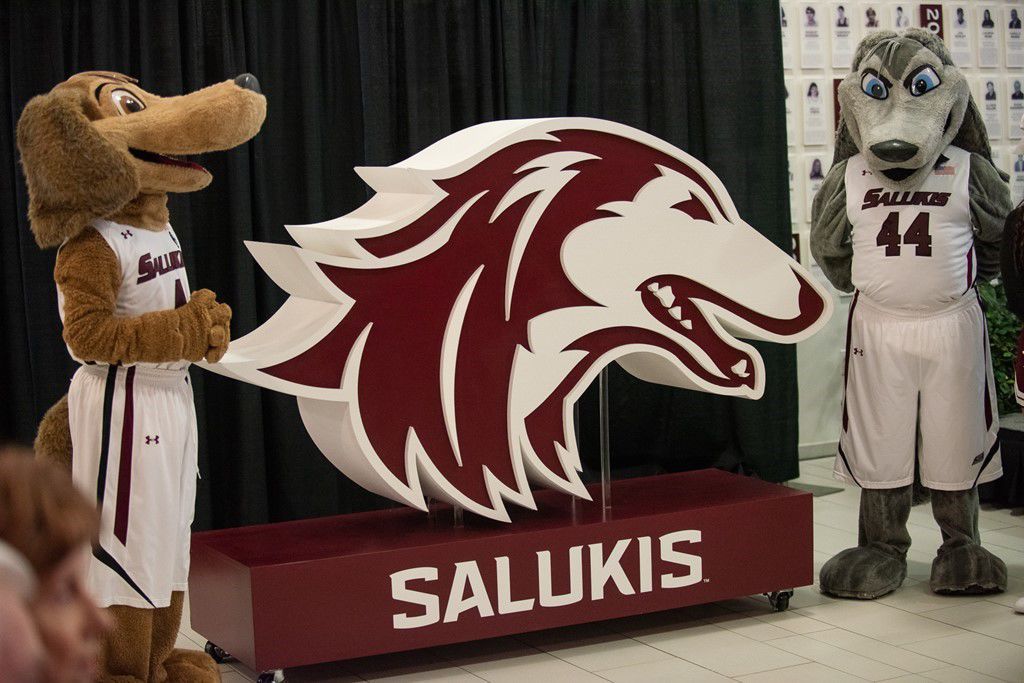 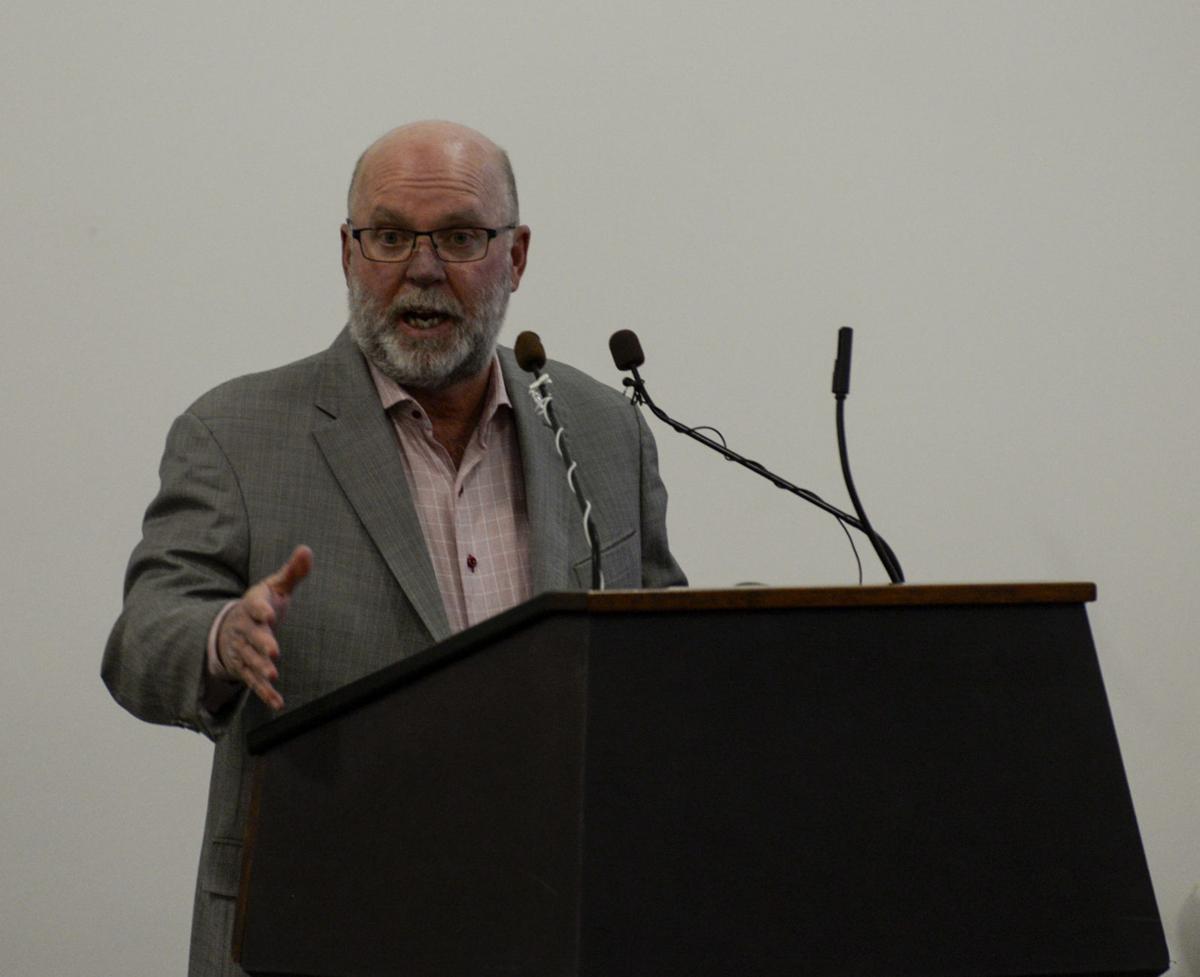 SIU Athletic Director Jeremy Kill speaks during the unveiling of the new SIU Salukis logo at the SIU Arena on Thursday. 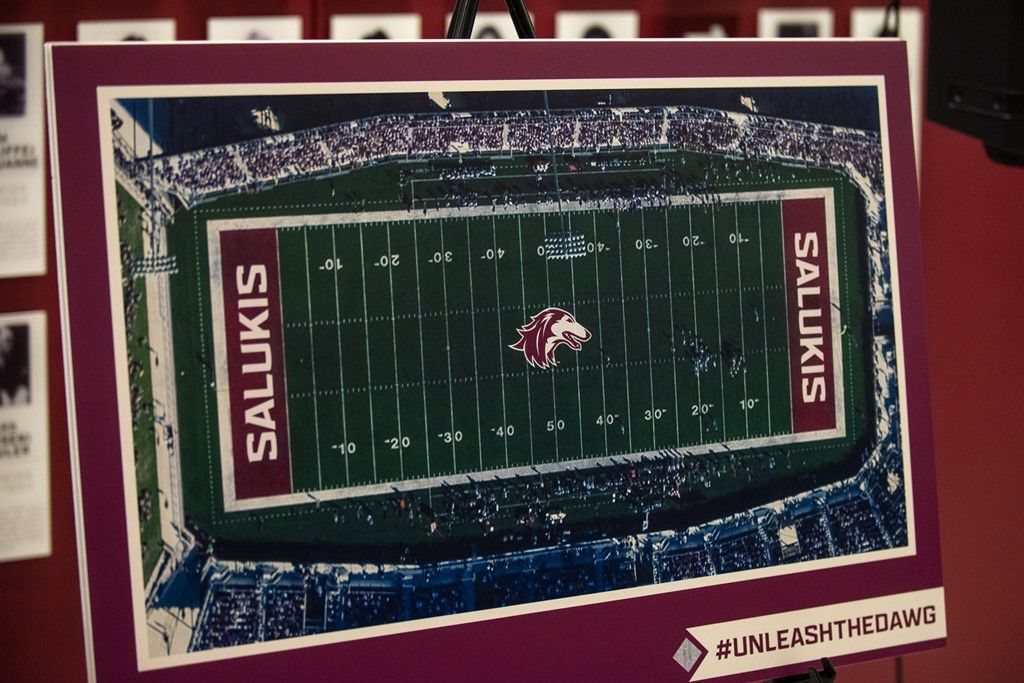 A depiction of what the new turf at Saluki Stadium may look like with the new SIU athletics logo, which was unveiled in February. 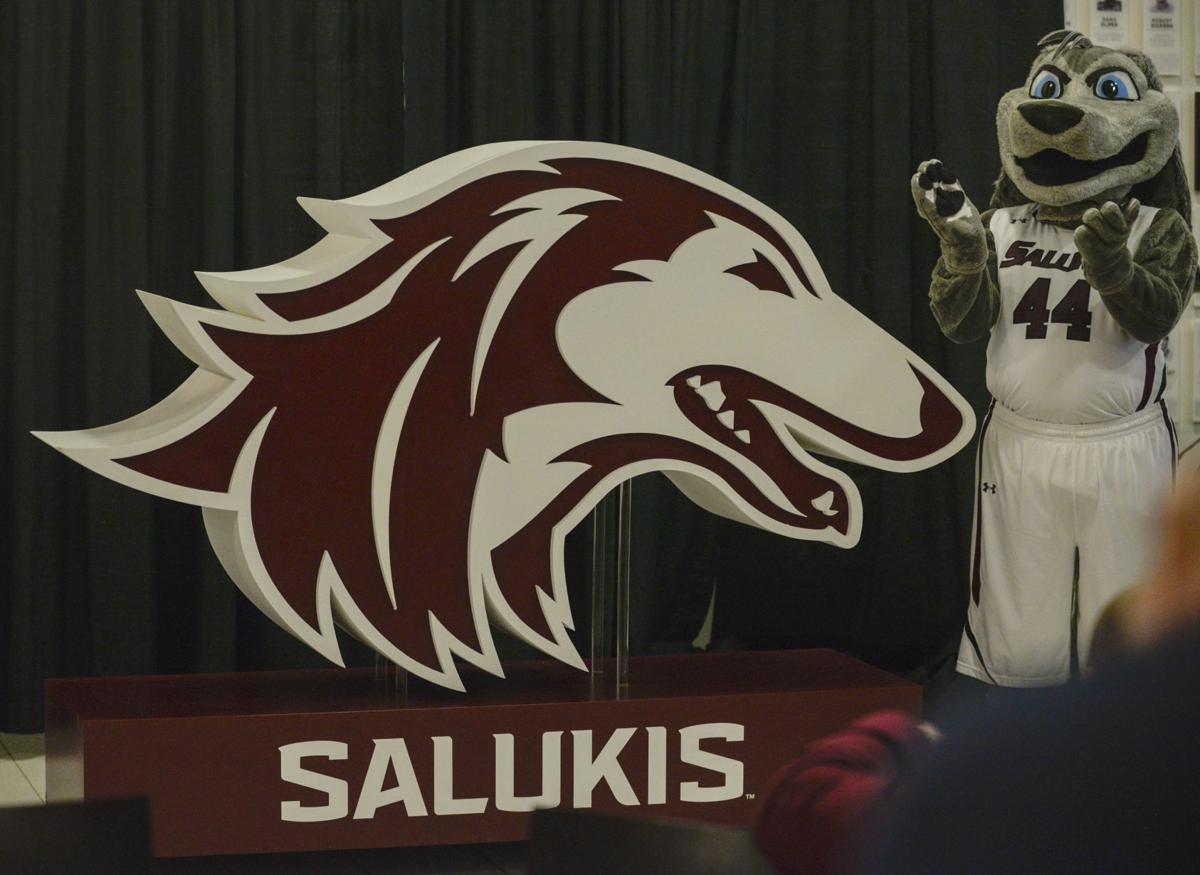 The Saluki logo is revealed at the SIU Arena on Thursday.

The Salukis' new logo, a more modern-looking sideways shot of a Saluki dog facing to the right, was unveiled at a short ceremony in front of about 200 invited guests Thursday afternoon on the concourse of the SIU Arena. The new logo is expected to be phased in to the Salukis' 17 sports, as uniforms are normally replaced every 2-4 years, but will begin showing up more prominently this spring when coaches go out recruiting.

Poll: What do you think of the new Saluki Athletics logo?

SIU Athletics on Thursday unveiled a new logo to represent the Salukis. What do you think?

Kill did not rule out every team having the new doghead, which will be featured at center court at SIU Arena and in the middle of the new turf at Saluki Stadium this summer, on their jerseys, warmups and uniforms beginning next school year. The SIU men's basketball team will wear it on new warm-up shirts at the Missouri Valley Conference men's basketball tournament in St. Louis next week in its first real public performance.

The Salukis plan to throw out T-shirts to students during Saturday's home men's game against Illinois State, and fans will be able to buy some merchandise in person at that game. Fans can buy merchandise right now with the new logo at siusalukis.com.

Seventy-five vendors, both locally and nationally, have already signed up to sell the new logo on T-shirts, sweatshirts, hats and other merchandise.

Kill, a former administrator at Kansas State University, said one of his biggest influences in helping design and pick the new logo was the Wildcats' iconic Power Cat.

"Me being there and seeing the Power Cat, the whole town bought into it, and I'm hoping with our new logo that we can get everybody to buy into it," Kill said. "They bought into it, and it was a tradition there, and always will be. Inspirational-wise, what it's done for that campus and that town, it was incredible, so I'm hoping that we can take this journey and continue it on for a long time."

Picking the new logo began three years ago, when Tommy Bell was still the athletic director at SIU. Torch Creative was selected for the project based on the company's history of developing unique collegiate logos. The firm researched the Salukis' history and presented ideas and sketches to the university. A group of university employees, student-athletes, athletic staff and community members provided input during the design phase, until the final version was approved by Kill and the chancellor's office last fall.

SIU renewed a licensing and merchandising contract with IMG College Licensing, which is now merged with Learfield, in 2017. That agreement included a $12,000 signing bonus to cover costs associated with designing and implementing a new logo. SIU paid Torch Creative $3,450 for the creation of the official SIU Salukis type font, and IMG paid Torch Creative $10,000 to design the logo.

The new turf at Saluki Stadium and a new floor at SIU Arena will be completed sometime this summer, Kill said. The projects are scheduled to go around spring football, which kicked off Wednesday, and summer basketball camps for the men's and women's teams.

Saluki Athletics logos through the years

Poll: What do you think of the new Saluki Athletics logo?

SIU Athletics on Thursday unveiled a new logo to represent the Salukis. What do you think?

CARBONDALE — The cost of athletic scholarships have gone up seven of the last eight years at SIU, eclipsing $6.2 million in 2016-17, according…

CARBONDALE — SIU Athletics has finished replacing the turf at Saluki Stadium, it announced in a Twitter video Wednesday.

CARBONDALE — Follett Corporation, one of the biggest retailers of college-licensed apparel, is expanding its business at the University Bookst…

SIU Athletic Director Jeremy Kill speaks during the unveiling of the new SIU Salukis logo at the SIU Arena on Thursday.

A depiction of what the new turf at Saluki Stadium may look like with the new SIU athletics logo, which was unveiled in February.

The Saluki logo is revealed at the SIU Arena on Thursday.