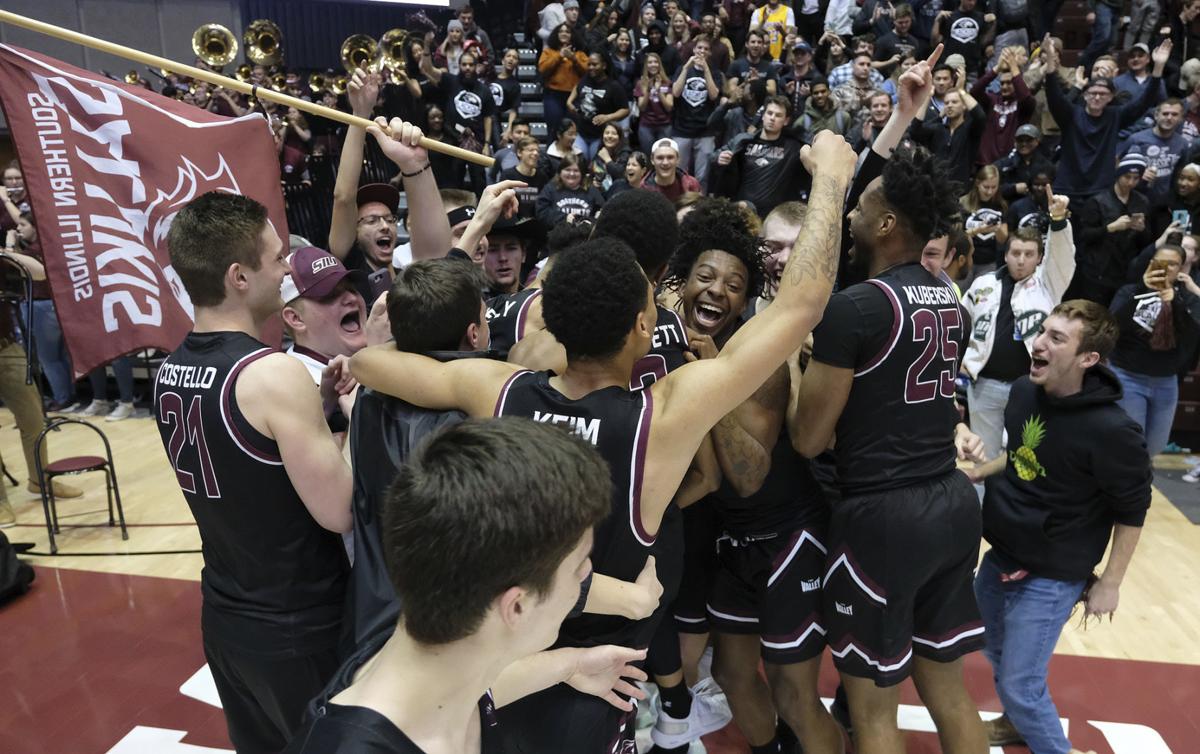 Saluki players celebrate with the Dawg Pound after defeating Loyola 68-63 at the Banterra Center on Wednesday in Carbondale. 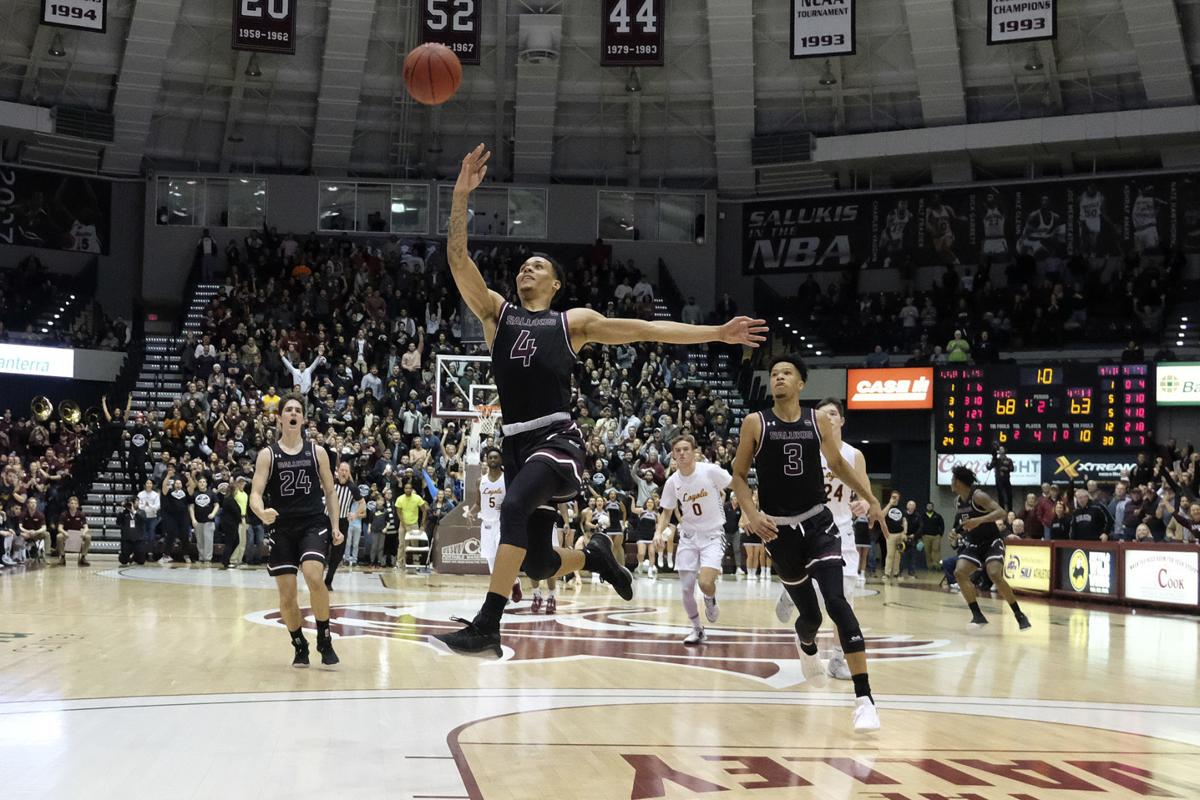 SIU guard Eric McGill (4) tosses the ball into the air as time runs out in the second half and the Salukis defeat Loyola 68-63 at the Banterra Center on Wednesday in Carbondale. McGill led all scorers with 27 points.

Attendance numbers, SIU's young contributors and the second half, all in today's Saluki Basketball 5@5.

For the latest news and tidbits surrounding the SIU men's basketball team and the Missouri Valley Conference, tune in to the Saluki Basketball 5@5 every day Monday through Friday at 5 p.m. To subscribe to The Southern Illinoisan and get the best Salukis coverage around, go to thesouthern.com or call 618-529-5454. Digital-only subscriptions start at just $5 a month. There is always more online!

No. 1 — Salukis fifth in attendance: Even after Wednesday's season-high 4,912 fans at SIU's win over Loyola, the Salukis are fifth in the MVC in average home attendance. SIU is averaging 4,158 fans per game through 11 dates, and will take a nine-game homecourt winning streak into its Feb. 8 game against Missouri State.

"I want to thank all the fans. I'm just so appreciative of the atmosphere at the Banterra Center, and it's really been since the start of the season," SIU coach Bryan Mullins said. "(Wednesday night) was just another special night. It was a special memory for our guys, and that crowd makes such a difference. It's hard for teams to come in here and play when we have the arena like that. It was just a great night for the community."

SIU honored its Black Out Cancer bidders at Wednesday's game, as well as the survivors in the crowd. The school also offered $8 tickets after winning eight home games in a row. Wednesday's 68-63 win over Loyola was No. 9 in a row.

No. 2 — Young contributors: Freshman guard Marcus Domask leads SIU in scoring, assists and 3-point shooting. He is second on the team in rebounding, behind Barret Benson. Domask is part of an underclassman contingent that is first or second on the squad in scoring, rebounding, assists and steals. Domask, Lance Jones, Trent Brown, Karrington Davis and Sekou Dembele have all scored in double figures in at least one game this season.

The Salukis' six underclassmen that have played this season make up 51% of their scoring.

No. 3 — Home cookin': SIU's ninth straight home win Wednesday night matched the program's longest homecourt winning streak since the 2007-08 season. That squad finished 18-15 and was the last Saluki team to play in the postseason. They beat Oklahoma State at home in the first round of the NIT and then lost at Arizona State, against a beardless guard named James Harden.

The Salukis moved to 10-1 at home this season. Their last home loss was Nov. 16 against San Francisco.

No. 4 — Hot start: SIU's 6-3 start to the conference season is the program's best since going 7-2 in the first half of the 2015-16 campaign. The Salukis beat three of the top-five teams, current leader Northern Iowa, second-place Loyola and fifth-place Drake.

SIU will play last-place Evansville twice and seventh-place Missouri State twice in the second half.

No. 5 — All 10 teams in action: All 10 MVC teams are in action Saturday, as Northern Iowa tries to stay in first place.

Loyola hosts Bradley at 7 p.m. on ESPN2. The Ramblers are 9-2 at home this season. Indiana State plays at Missouri State at 3, and Illinois State is at Valparaiso at 7.

SIU at Drake: 3 things to watch

Drake's men's basketball team has won 15 straight games at the Knapp Center in Des Moines. SIU has won four straight and six of its last eight.

Salukis' game at Northern Iowa Feb. 23 picked up by ESPNU

CARBONDALE — SIU's men's basketball game at Missouri Valley Conference leader Northern Iowa on Sunday, Feb. 23, has been picked up by ESPNU as…

Saluki players celebrate with the Dawg Pound after defeating Loyola 68-63 at the Banterra Center on Wednesday in Carbondale.

SIU guard Eric McGill (4) tosses the ball into the air as time runs out in the second half and the Salukis defeat Loyola 68-63 at the Banterra Center on Wednesday in Carbondale. McGill led all scorers with 27 points.