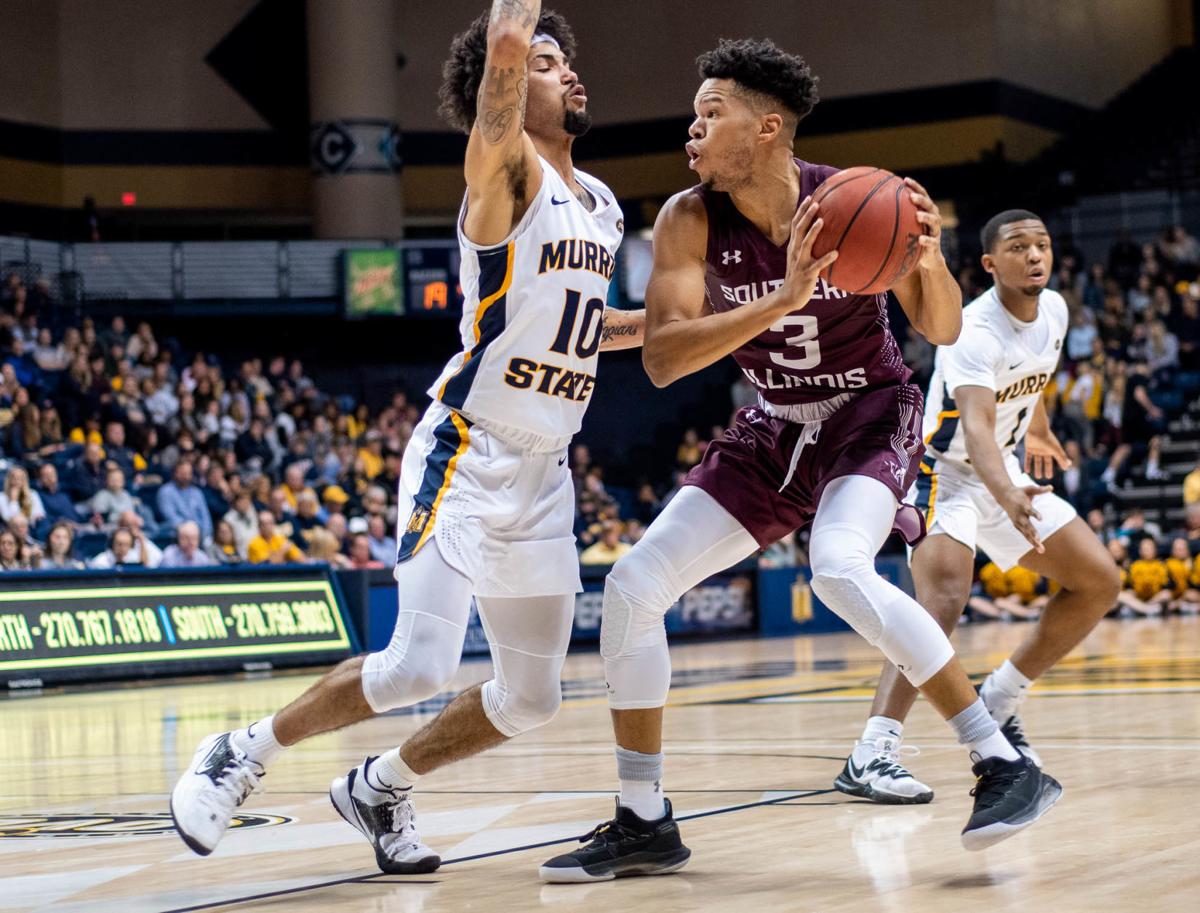 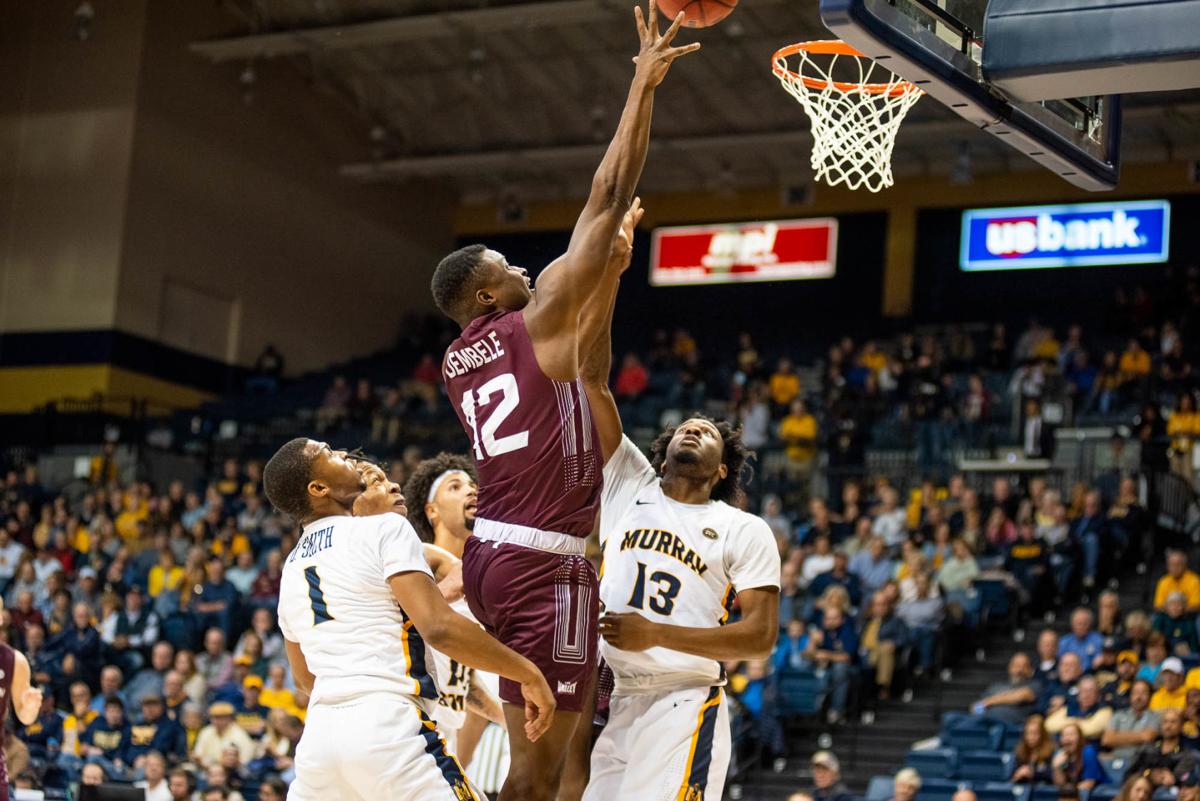 SIU forward Sekou Dembele fires against Murray State Tuesday night at the CFSB Center in Murray, Ky. Dembele, a redshirt freshman forward, made his collegiate debut after missing the first five games with a stress fracture.

Aaron Cook, the Salukis' leading scorer the last four games, converted at the other end to bring his team within four at the CFSB Center. That's when the wheels fell off of SIU's upset bid against the Racers. Darnell Cowart, MSU's 6-foot-8, 280-pound problem inside for the Salukis, missed a short jumper, only to see teammate Anthony Smith grab the offensive rebound and draw a foul.

"We came out strong, focused on things we wanted to focus on as the game went on," SIU center Barret Benson said. "We got away from what got us that great start, and credit to Murray. They hit shots when they needed to and finished off transition and turnovers, and stuff like that, too."

The Salukis contributed to the run at both ends of the floor, missing their only two shots during the run and the front end of a 1-and-1 that might have brought them back within four. Cook drew a foul with 7:24 to play, but missed the first free throw. Smith, a crafty 6-7, 225-pound senior forward, was doubled underneath the rim but was able to find 6-10 forward K.J. Williams for a dunk and an eight-point lead.

Eric McGill missed a 3 at the other end for SIU, then opened the door to Tevin Brown's transition 3 when his pass was stolen by Williams. DaQuan Smith found Brown, the Racers' leading scorer entering the game at 15 points per game, for a 3-pointer that pushed the lead to 12 with 5:42 to go.

"We took some bad shots," SIU coach Bryan Mullins said. "We were having some success driving the ball to the basket and getting to the free-throw line. We put 'em in the bonus, and then we took a bunch of 3s. We gotta stay aggressive there."

Brown, who had five points at the half, finished 5 of 9 from the field and 5 of 6 at the free-throw line for 18 points in 39 minutes. The 6-5 sophomore also had five rebounds and two assists for MSU, which won its ninth straight game at home. Racers coach Matt McMahon said Brown did more than score for his team.

"Eighteen points on nine shots. Five rebounds. Got to the free-throw line six times. Played 39 minutes, no turnovers," McMahon said. "So, he impacts winning in a lot of ways. Excited for him. He's really growing as a leader. When things got tough (Tuesday night), he really had the right words in the huddle."

Mullins was also encouraged by his team's turnaround after losing by 16 at home to an undefeated San Francisco team Saturday night.

"After San Francisco we challenged the guys the last couple days, and they know they didn't play the right way against San Francisco," he said. "We battled 'em. Like I said, there were two runs, end of the first half and end of the game, that really caused the separation, and we gotta do a better job of not letting 6-0, 8-0, 10-0 runs happen throughout the game."

SIU is off until Tuesday night, when it hosts North Carolina Central at the Banterra Center. Tipoff is scheduled for 7 p.m.

Aaron Cook earns his 44th double-digit scoring game, then there was one, and a peek at SIU's best analytical lineup from Tuesday's loss at Mur…

MURRAY, Ky. — Just when it appeared SIU's men's basketball team was about to earn some breathing room at Murray State Tuesday night, the Racer…

SIU's next opponent gets a win, the offense gets another challenge, and the busy weekend for league teams, all in today's Saluki Basketball 5@5.

Karrington Davis could play against North Carolina Central, how SIU is trying to take advantage of a light week in recruiting, and Saluki coac…

CARBONDALE — Without Aaron Cook, who will miss at least the next month with a broken bone in his right hand, SIU's men's basketball team will …

SIU forward Sekou Dembele fires against Murray State Tuesday night at the CFSB Center in Murray, Ky. Dembele, a redshirt freshman forward, made his collegiate debut after missing the first five games with a stress fracture.