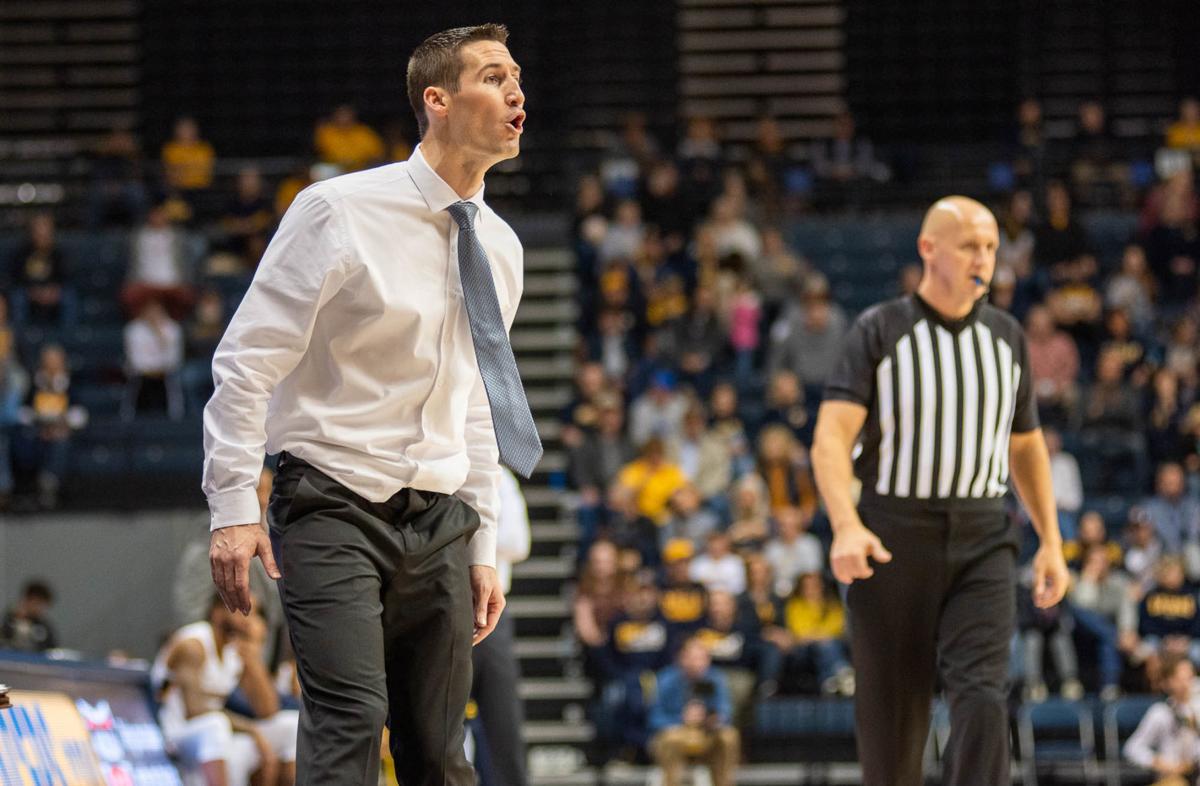 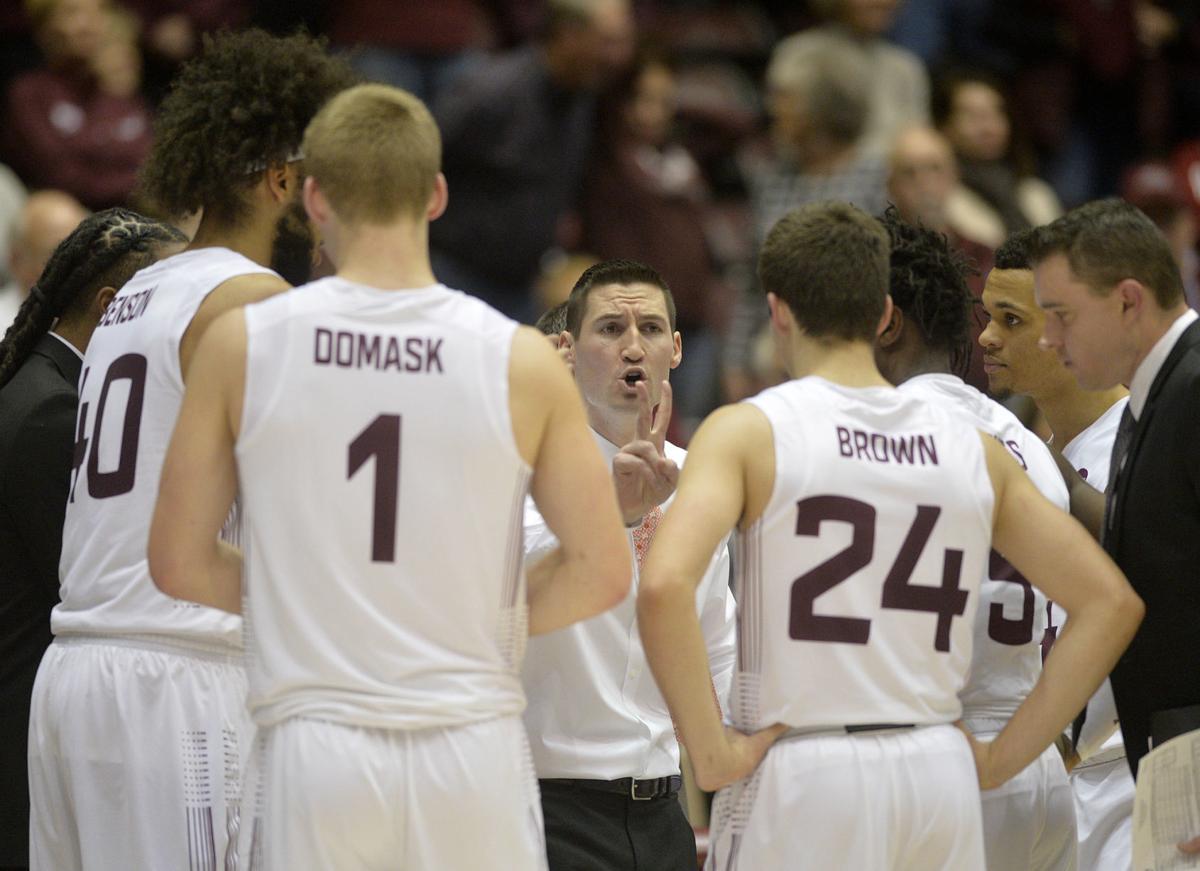 SIU head coach Bryan Mullins talks to his players during a timeout in the second half against Northern Iowa at the Banterra Center on Jan. 22 in Carbondale. SIU held on to win 68-66. 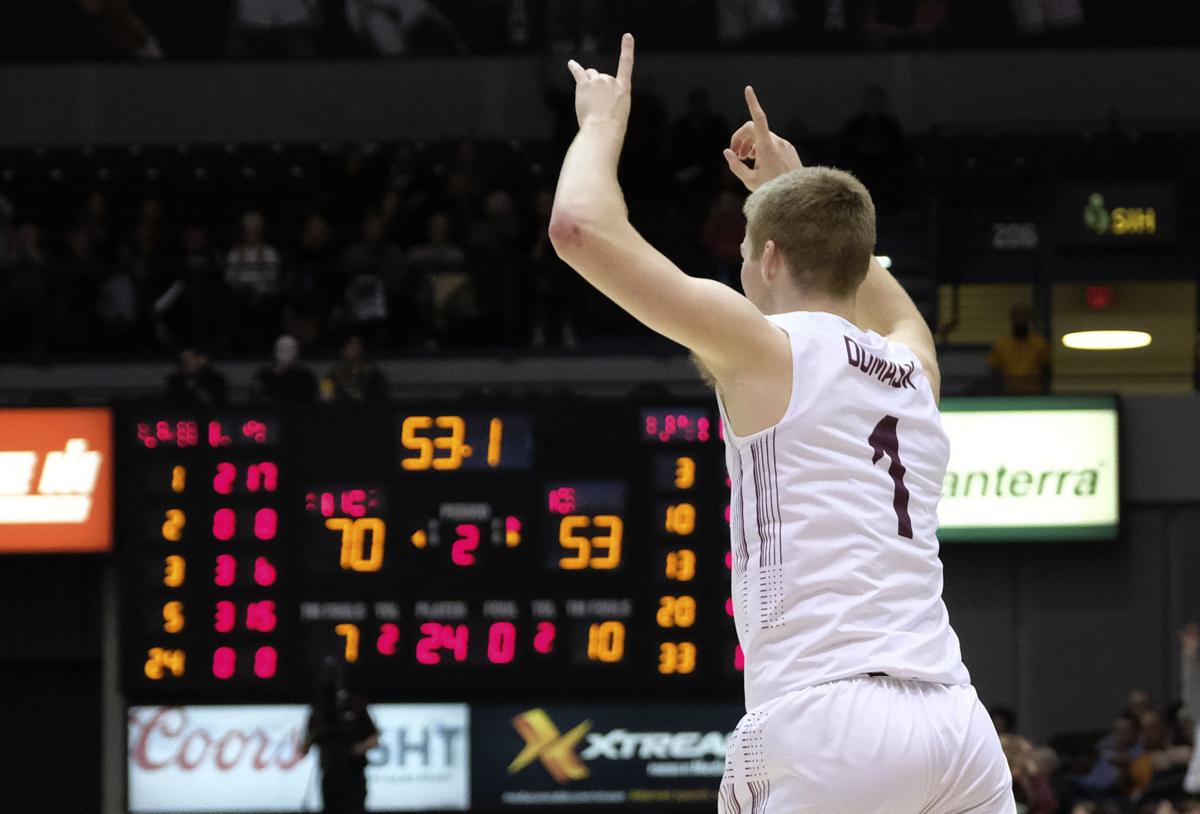 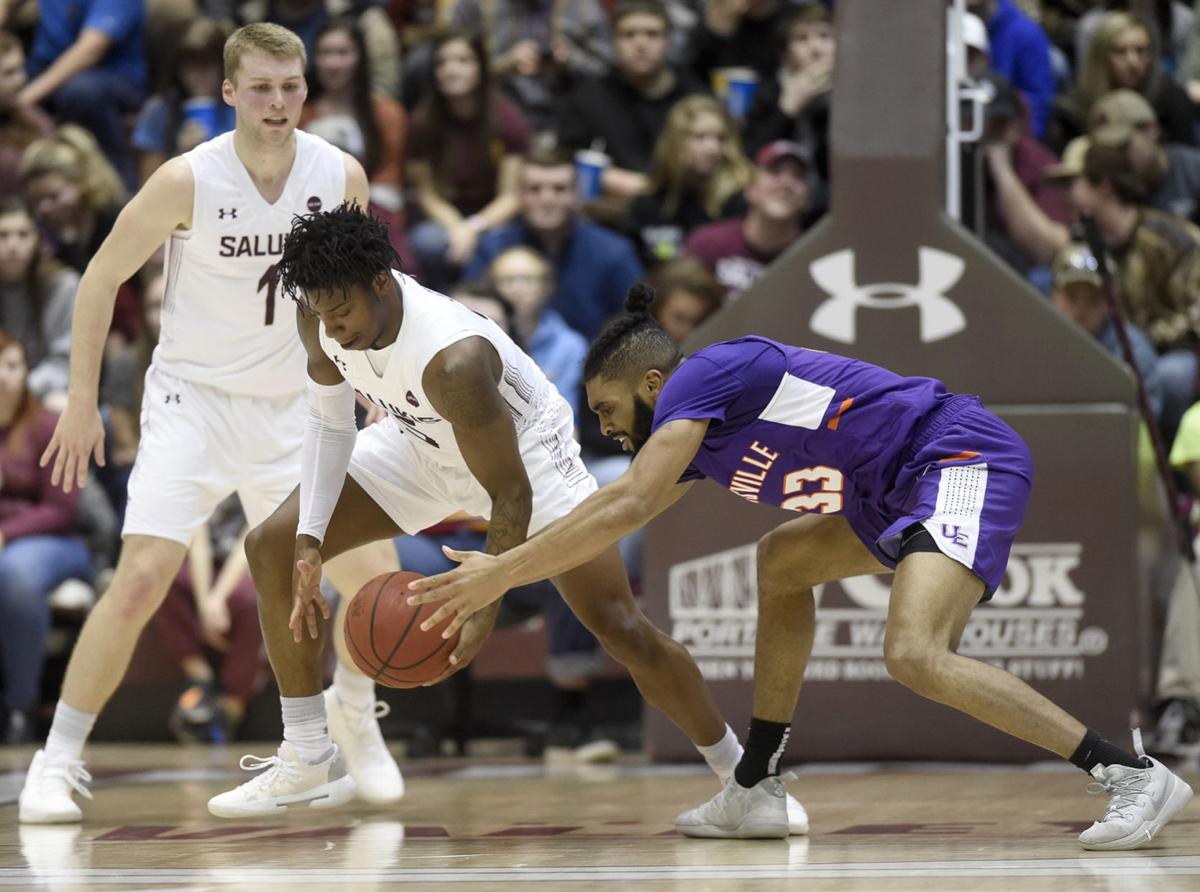 SIU guard Lance Jones (5) steals the ball from Evansville guard K.J. Riley (33) during the first half at the Banterra Center on Thursday in Carbondale. 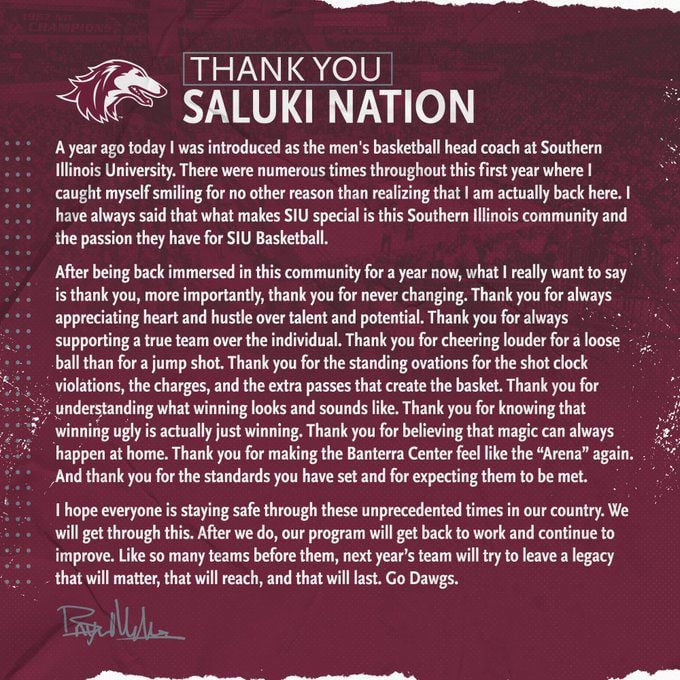 CARBONDALE — He lost two guys that were selected for the Missouri Valley Conference All-Defensive Team in 2019 to graduation and his top defender six games into his first season, but SIU men's basketball coach Bryan Mullins can teach defense. Even to a group with 11 newcomers, tied for the fifth-most in the country.

Four of those newcomers started most of the season for the 16-16 Salukis, who finished fifth in the MVC at 10-8. SIU led the Valley in scoring defense for the first time in 13 years, allowing 62.2 points per game, its best mark since the 2014-15 season (61.9 points per game allowed).

"They had their own personality, but they represented the university and the community really well on and off the court," said Mullins, a Hall of Fame point guard here in the late 2000s who was a two-time MVC Defensive Player of the Year and the 2009 Co-Scholar-Athlete of the Year with Evansville's Jason Holsinger. "Our team was made up of a lot of guys that had a lot of different experiences, but I think all of them had a chip on their shoulder and were all about the team. I think that's why this community loved watching them play so much."

Without center Kavion Pippen and guard Sean Lloyd, two members of the 2019 MVC All-Defensive Team, SIU played the whole season without a real rim protector. Senior guard Aaron Cook had 19 steals in his first six games, one of the top marks in the nation when he went out with a broken right (shooting) hand. Cook never returned, pushing freshman guard Lance Jones into the starting lineup. Jones, a powerful 6-foot-1, 200-pounder from Evanston, was one of five Salukis with 20 or more steals, finishing with 31 in 32 games.

Trent Brown, another freshman guard, averaged less than three points per game and made his mark at the defensive end. His hounding of Northern Iowa's A.J. Green, the MVC Player of the Year, on Jan. 22 allowed the Salukis to beat the Panthers for their signature win of the season. Brown had 28 steals and averaged over 20 minutes a game. Freshman Marcus Domask, a 6-6, 215-pound guard who became one of SIU's best post players late in the season, was the Salukis' second-leading scorer (13.6 points per game) and second-leading rebounder (5.2 boards a game) behind Benson, a 6-10 graduate center from Northwestern.

Domask, SIU's first MVC Freshman of the Year since Kevin Dillard in 2009, tied for the Valley lead in minutes per game (34.8), led the Salukis in 3-point shooting (54 of 136, 39.7%), and tied for second with 79 assists. His game-winning, buzzer-beating jumper against Missouri State at home Feb. 8 was one of the team's best plays of the year.

With senior guard Eric McGill (11.2 ppg.) and graduate guard Ronnie Suggs (5.3 ppg., 2.9 rpg.), SIU had one of the oldest starting lineups in the Valley even with the two true freshmen. The Salukis finished the season with four straight losses, falling 64-59 to Bradley in the MVC Tournament quarterfinals, but were also one of two teams in the league to beat the top-two seeds. SIU beat top-seeded Northern Iowa 68-66 and topped second-seeded Loyola 68-63 at the Banterra Center on Jan. 29.

"The highlight was just the group that I got to coach every day, and the group of guys, forming them, and seeing how far they came since we got 'em in June," Mullins said. "They were a team and they played for each other. I think they believed that we were going to make the NCAA Tournament and we were going to have a long weekend in St. Louis. Obviously we fell a possession short there, but I appreciate their investment throughout the whole season."

Mullins finished second in the MVC Coach of the Year voting behind Northern Iowa's Ben Jacobson, in one of the closest races in league history.

"Thank you for knowing that winning ugly is actually just winning," he said. "Thank you for believing that magic can always happen at home. Thank you for making the Banterra Center feel like the 'Arena' again. And thank you for the standards you have set and for expecting them to be met."

SIU could return Domask and Jones, as well as all five of its top bench players from this past season, in 2020-21. Recruits Dalton Banks (first team all-state) and Eric Butler (state champion in Florida) both had outstanding senior years. Mullins has one scholarship remaining for next season, as of today, and plans to hold individual meetings with his players this weekend or next week. He will do it through video or in person, depending on who returns to campus, as SIU is moving to online classes through the rest of the spring semester because of the coronavirus pandemic.

Lance Jones began his freshman season as a backup guard, behind veterans like Aaron Cook and Eric McGill. When Cook suffered a season-ending injury to his shooting hand, Jones had to take over most of the ballhandling for a team with 11 newcomers.

The SIU men's basketball team fell to Bradley in the quarterfinals of the Missouri Valley Conference Tournament on Friday. After getting picked last in the league's preseason poll, the Salukis finished the season fifth in the conference.

ST. LOUIS — In a stunning announcement Thursday, Northern Iowa's Ben Jacobson was named the Missouri Valley Conference Coach of the Year at th…

Southern Illinois University's Marcus Domask became the first player in school history since Kent Williams to win the Missouri Valley Conference's Freshman of the Year Award and Newcomer of the Year Award on Tuesday.

CARBONDALE — SIU guard Marcus Domask, the team's leading scorer and second-leading rebounder during conference play, was named to the All-Miss…

CARBONDALE — Brendon Gooch and Stevan Jeremic will not return to the SIU men's basketball team, according to coach Bryan Mullins.

CARBONDALE — SIU's men's basketball team ended the season with one available scholarship for 2020-21. Less than a month later, the Salukis now…

SIU head coach Bryan Mullins talks to his players during a timeout in the second half against Northern Iowa at the Banterra Center on Jan. 22 in Carbondale. SIU held on to win 68-66.

SIU guard Lance Jones (5) steals the ball from Evansville guard K.J. Riley (33) during the first half at the Banterra Center on Thursday in Carbondale.