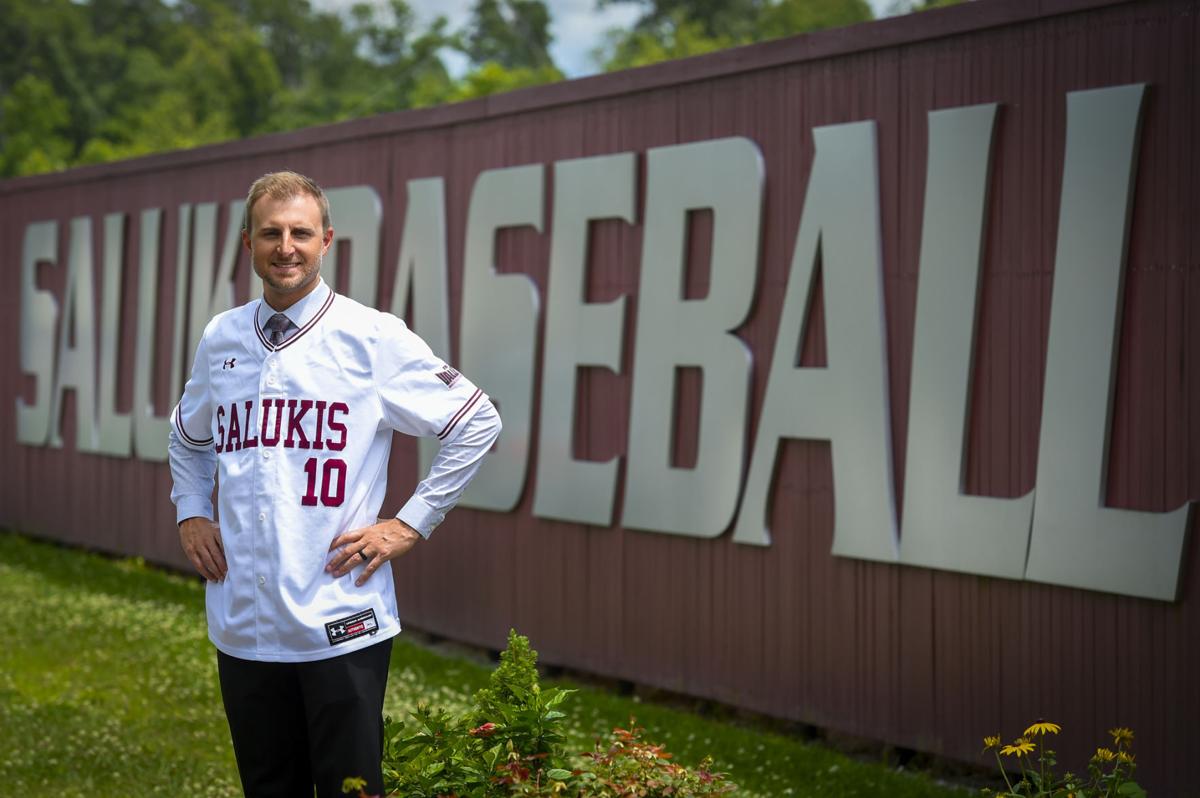 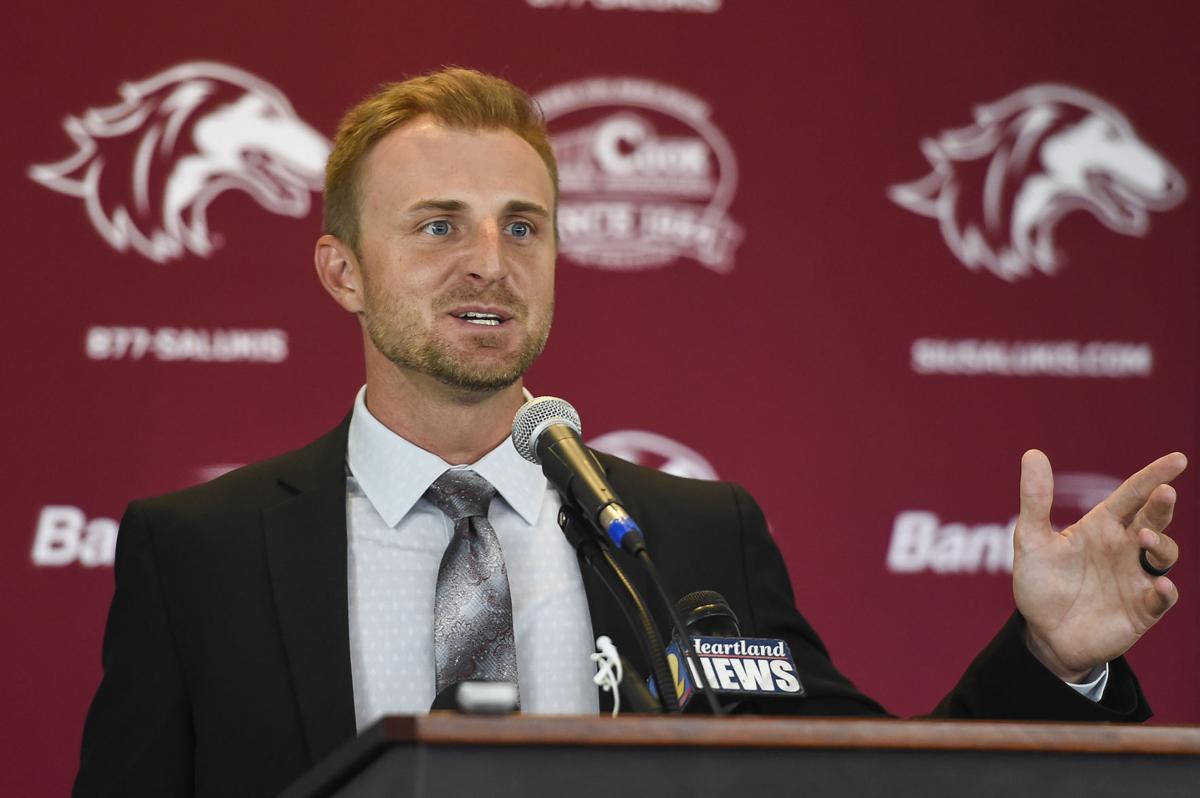 SIU baseball coach Lance Rhodes speaks during a press conference after being introduced as the program’s new head coach in June at the Banterra Center in Carbondale. 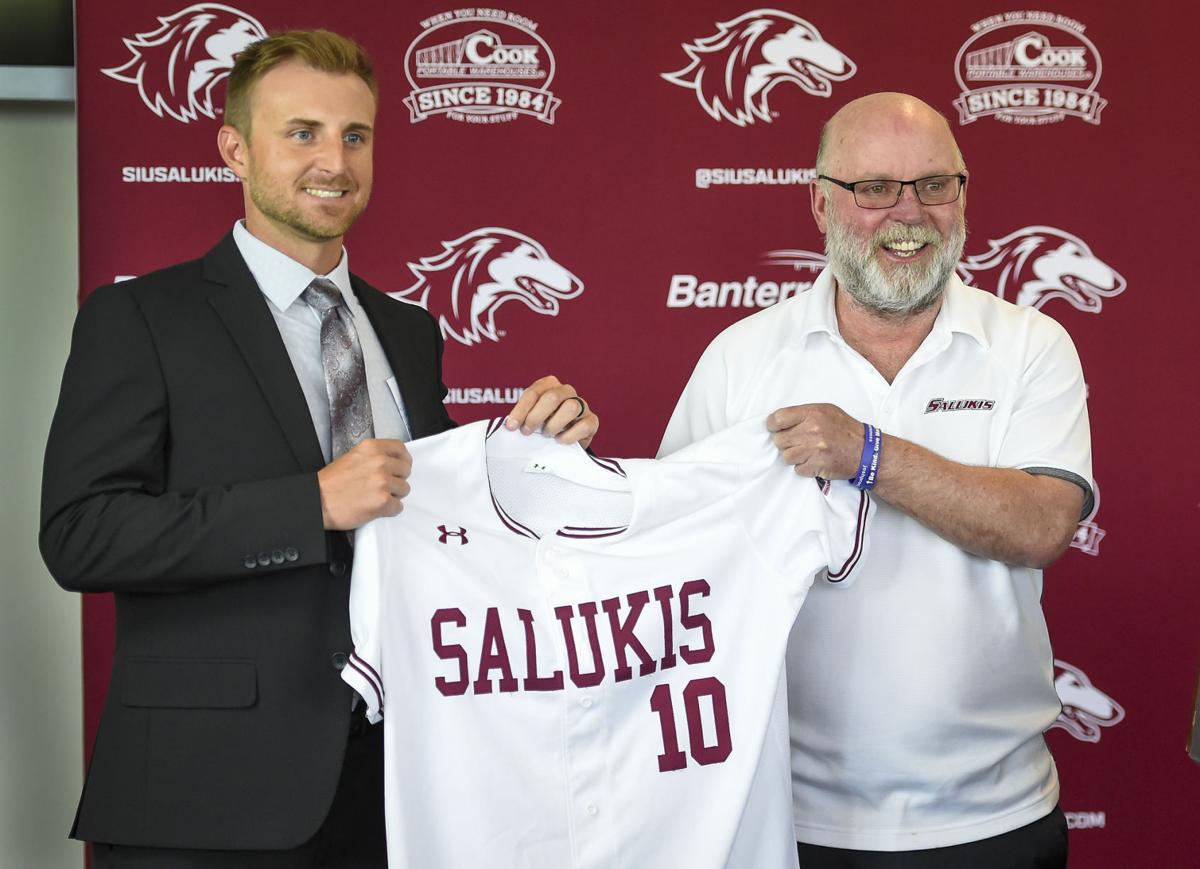 CARBONDALE — You may not see him right away on the recruiting trail, but SIU baseball coach Lance Rhodes is out there.

In the last two years, the Sikeston, Missouri native helped land the No. 33 recruiting class in the country at Missouri and the 10th-best junior college group in the country in Carbondale. From Wabash Valley College to Southeast Missouri State, to Missouri, and to SIU, Rhodes has signed three Ohio Valley Conference Pitchers of the Year, two Players of the Year and 28 major league draft picks. Outside of SIU's 2021 class, which was ranked the 10th-best junior college group in the country, he's been a part of four straight top-25 classes.

People close to Rhodes call him likable, easygoing, and not afraid of players giving him the opposite of yes.

"It was OK to hear a 'No,'" said Dillon Lawson, the minor league hitting coordinator for the New York Yankees who was Rhodes' roommate on the road when they were both at Southeast Missouri State. "People would say 'No' all the time, but the persistence. If this guy said 'No,' let's go find somebody that can be the next person that we want and we need, and can push us over the top. He was just relentless."

Missouri coach Steve Bieser, who worked with Rhodes at SEMO before bringing him along to Columbia as the Tigers' recruiting coordinator, said he liked to listen more than talk when out recruiting.

"He's very personable, and I always hear like he's the silent assassin out on the road when he's recruiting," Bieser said. "He's going to stay back, and he's going to be listening a lot and maybe not talking a lot, and just doing a great job of evaluating players and trying to get every piece of information possible to make the best choice. Because in baseball, it's a very limited pick each year."

Bieser, Mizzou's leader since 2017, led the Tigers to 104 wins in his first three years, the most ever for a new coach. Missouri won 39 games in the Southeastern Conference from 2017-19, its best stretch since joining the league seven years ago. Seventeen Tigers were taken in the Major League Baseball draft. Rhodes was a big part of their success, working with both pitchers and hitters.

"It's not just that he's going to take your word for it. He's gonna challenge, and ask deeper questions, and really build his own philosophy, and I think that's why we've seen (it)," Bieser said. "They were going to have a really good year last year, and I think they're going to have a very good year this year. The capability of him having the opportunity to come in, find a few pieces, and turn things around quickly, that's there with him."

Recruiting, Rhodes said, has always had an element of secrecy to it.

"We're around each other all summer and all fall, and people tend to talk a lot," he said. "They talk about recruits. I never try to give anything away, and I try to gather as much information as I possibly can get. Recruiting's tough. We're all out there trying to get the best players in the country, and you've gotta do everything you can do get those players to believe in you as a coach, the system, and the university. It's tough, just because there's a lot of good programs out there."

Rhodes helped the Salukis to their first winning record in four years earlier this year, albeit a shortened 18-game affair (12-6). SIU took 3 of 4 at Jackson State to start the year, fell 4-3 at Belmont in its first mid-week game of the season, and gave 18th-ranked Arizona all it could handle in a 6-5 loss at a tournament in San Diego. The Salukis then beat USC 3-1, but ended the Tony Gwynn Legacy with a 9-2 loss to Seattle.

Rhodes called the tournament a turning point in the season.

"We played really well against USC and Arizona, two really big names, and then, maybe a lesser name, but they were a good opponent, in Seattle, and our guys just assumed we would walk in, just because we played well against two Power Five schools, that we'd just be able to walk in on Sunday and beat Seattle," he said. "We played probably our worst game of the season that Sunday against Seattle, so, just a learning moment for our guys. Every single Division I team in the country can beat you on any given day if you don't play well, and what we tried to preach in the dugout, it doesn't matter if it's Arizona, or USC, or SEMO, or Murray State.

"It doesn't matter what the other jersey says. We've just gotta play a game at an extremely high level."

With almost everyone back from the 2020 squad, Rhodes hopes the Salukis can build on their five-game winning streak from last season when the squad turns it back up in January 2021.

CARBONDALE — SIU already has the plans in place for the 2021 Missouri Valley Conference baseball tournament. Now it just hopes it's given the …

SIU baseball coach Lance Rhodes speaks during a press conference after being introduced as the program’s new head coach in June at the Banterra Center in Carbondale.