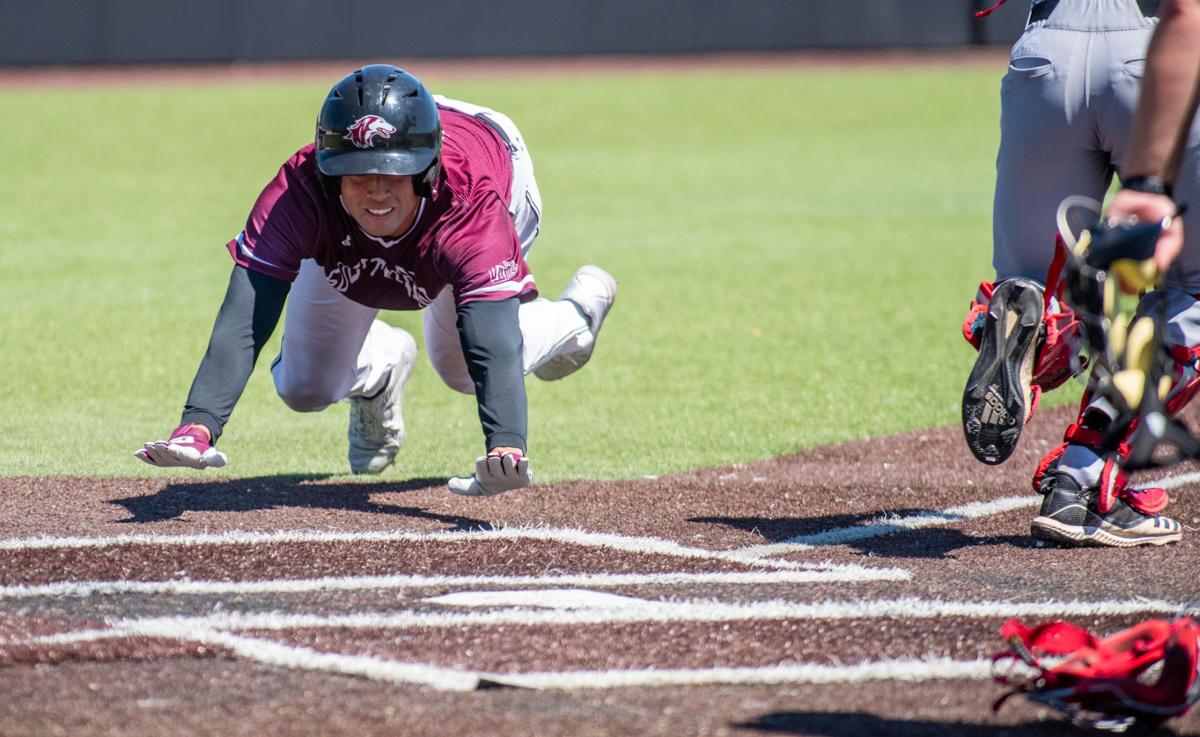 SIU's Nick Neville dives head-first for the plate during the Salukis' 8-4 win over Northern Illinois on April 11. 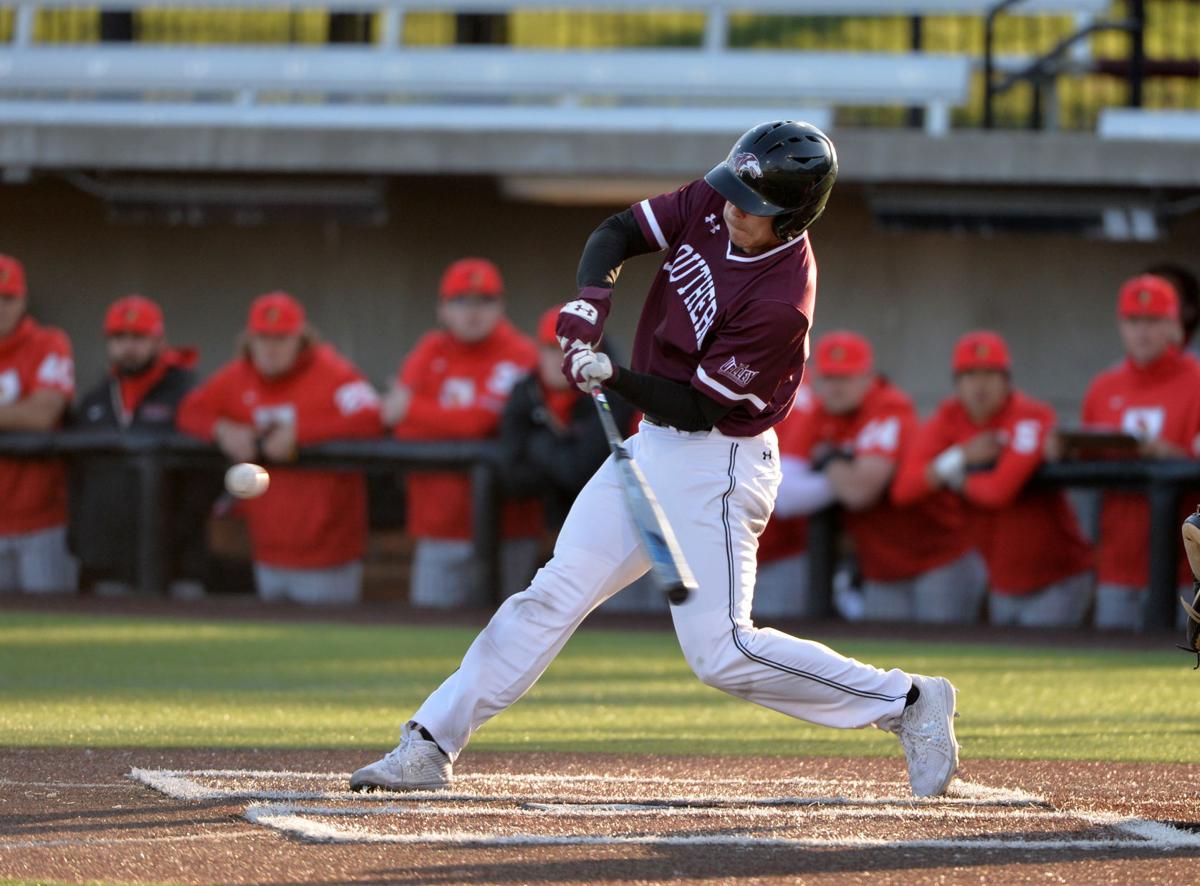 SIU shortstop Nick Neville swings at a pitch during the Salukis game with the Illinois State Redbirds at Itchy Jones Stadium on April 2 in Carbondale. 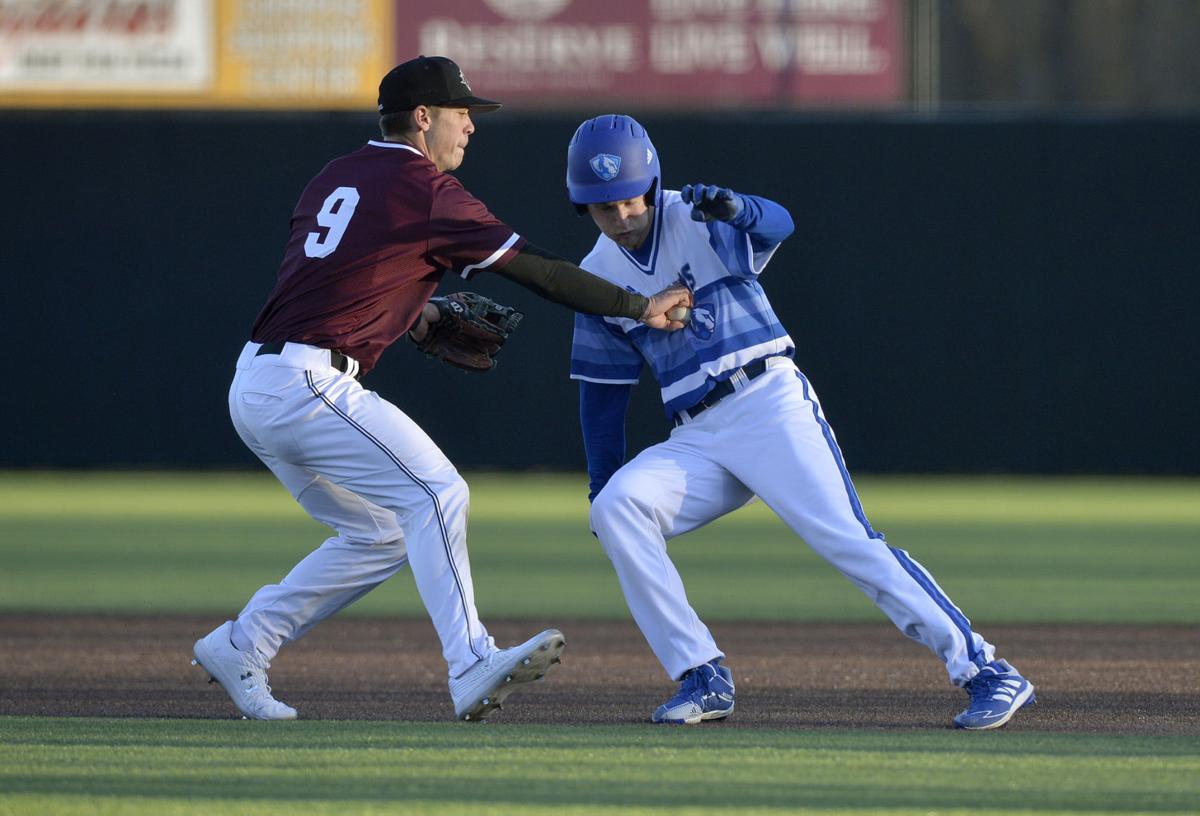 SIU shortstop Nick Neville (9) tags out Eastern Illinois Grant Emme as he tries to advance on an error during the first inning at Itchy Jones Stadium on Tuesday in Carbondale.

Any class at the 300 level or above counted towards Nick Neville's major, university studies, because the 6-foot, 195-pound senior shortstop is at his fourth college. Neville started out at Notre Dame, played one year at San Jacinto College (Texas) and another year at South Carolina before coming to SIU in 2019. He played at two different high schools in four years, and then a postgraduate year at IMG Academy. That's a lot of teammates, coaches and days on the diamond.

"It's Finals Week, but it's a beautiful day," Neville said in an interview before the Salukis went to Evansville for a four-game series May 7. "I get to be out with my best friends every day, is really what I enjoy the most, the brotherhood I've created on this team. Obviously it's cool to win, it's cool to play well, but when I think about this team, I think about the guys on the team, not the big wins that we've had."

Neville and the Salukis (33-14 going into Tuesday night's game at Murray State) could have more big wins this month. SIU started out 14-0 this season, the best start in school history, and won 19 in a row at one point. The Salukis' 33 wins were the fifth-most since 1990, and the most since 2008. They've done it largely with offense, as they are sixth in the country in hits, 10th in runs, 11th in home runs and 11th in slugging percentage.

Later this month, with the program's first NCAA regionals berth since 1990 on the line, SIU is scheduled to host the MVC Tournament for the first time since 1986.

Neville, despite a 6 for 33 swing through the first two weeks of March, was batting .303 in 45 starts heading into Tuesday night's game. His 49 runs led the Missouri Valley Conference, and his 56 hits were the fourth-most in the league. The 23-year-old Virginia native (he was born in Arlington) has batted second or third most of the season, and come through with 10 doubles, two triples, 11 home runs, one behind leader J.T. Weber's 12, and 34 RBIs, the fourth-most on the team that has more than anyone. Teammates Phillip Archer (49 RBIs), Weber (48) and Tristan Peters (44) are 1-2-3 in the league RBIs race.

"I think it's a culture thing, and it starts at the top. Coach (Lance) Rhodes came in here and totally changed the way that people thought about the program, you know? Before coach Rhodes was here, people were kind of OK with being mediocre. They kind of wore it, that 'We're Southern Illinois, we're not going to be very good,'" Neville said. "And coach Rhodes, from Day 1, had the expectations that we're going to win a conference championship, and we have to believe it and work towards it every day. When Tristan Peters comes along and we already have that culture established, he fit right in. He could play in Alaska and still hit .350. That's just the kind of player he is."

Neville, a former outfielder who moved to the infield his senior year of high school, has fit right in, too. One of eight seniors on this year's club, Neville, who bats lefty but throws righty, had 48 strikeouts in 148 at-bats heading into Tuesday night, with 21 walks. All that extra work in the batting cage before and after practice has paid off, Rhodes said.

"Coming up with big hits. Driving runs in, and he's doing it in the biggest moments there in the middle of the order, so, I'm just super proud that he's never scared of the moment," he said. "He's never scared of the opportunity. If there's ever a big moment in the game, I know he wants to be up there. And he's a good hitter. He works extremely hard and puts in a lot of time and effort. He's worked himself into a good hitter."

Neville plans to pursue the Major League Baseball draft this summer, which is shortened to 20 rounds. Whenever his professional career ends, Neville plans to stay in the game that has given him so much.

"It's been the source of so much happiness, and so much pain, but I realized that everything that has happened in my life is because I've been chasing a career in baseball," he said. "All of my friends, the relationships I've developed, the places I've been, and I think it's only right to give back to the game that's done everything for me."

Is the Cincinnati Reds recent hot streak sustainable the rest of the season?

How much of a World Series contender are the Chicago White Sox?

How much of a World Series contender are the Chicago White Sox?

What teams could make a push for Aaron Rodgers?

What teams could make a push for Aaron Rodgers?

How the MLB's new sticky substance policy can impact bettors

How the MLB's new sticky substance policy can impact bettors

Back On The Map: A look back at SIU's 2021 baseball season

Take a look back at SIU's historic 2021 baseball season in our online collection. The Salukis went 40-20 in coach Lance Rhodes' second season,…

EVANSVILLE, Ind. — The Evansville baseball team beat SIU 6-5 on Sunday at German American Bank Field to earn a split of the four-game non-conf…

Brad Harrison and Bubba Hall combined to shut out Evansville on Saturday at German American Bank Field, leading the SIU baseball team to a win

SIU center fielder Tristan Peters knows his zone. In the field. At the plate. And between the lines instead of between the boards.

CARBONDALE — Jon Snow's robe in "Game of Thrones" has an animal wrapped around the back, to keep him warm in the darkest and dangerous winters…

SIU Baseball | Salukis' Hudson creates havoc on the bases, at the plate

CARBONDALE — In a game of free bases, SIU outfielder Brad Hudson took two critical ones leading off the third inning Friday against Marshall.

CARBONDALE — SIU's baseball game against Indiana State is not only a chance to advance at the Missouri Valley Conference Tournament, but get b…

CARBONDALE — SIU's baseball team closed the 2020 COVID-19-shortened season with five straight wins, and found a way to keep the momentum in 2021.

SIU's Nick Neville dives head-first for the plate during the Salukis' 8-4 win over Northern Illinois on April 11.

SIU shortstop Nick Neville swings at a pitch during the Salukis game with the Illinois State Redbirds at Itchy Jones Stadium on April 2 in Carbondale.

SIU shortstop Nick Neville (9) tags out Eastern Illinois Grant Emme as he tries to advance on an error during the first inning at Itchy Jones Stadium on Tuesday in Carbondale.