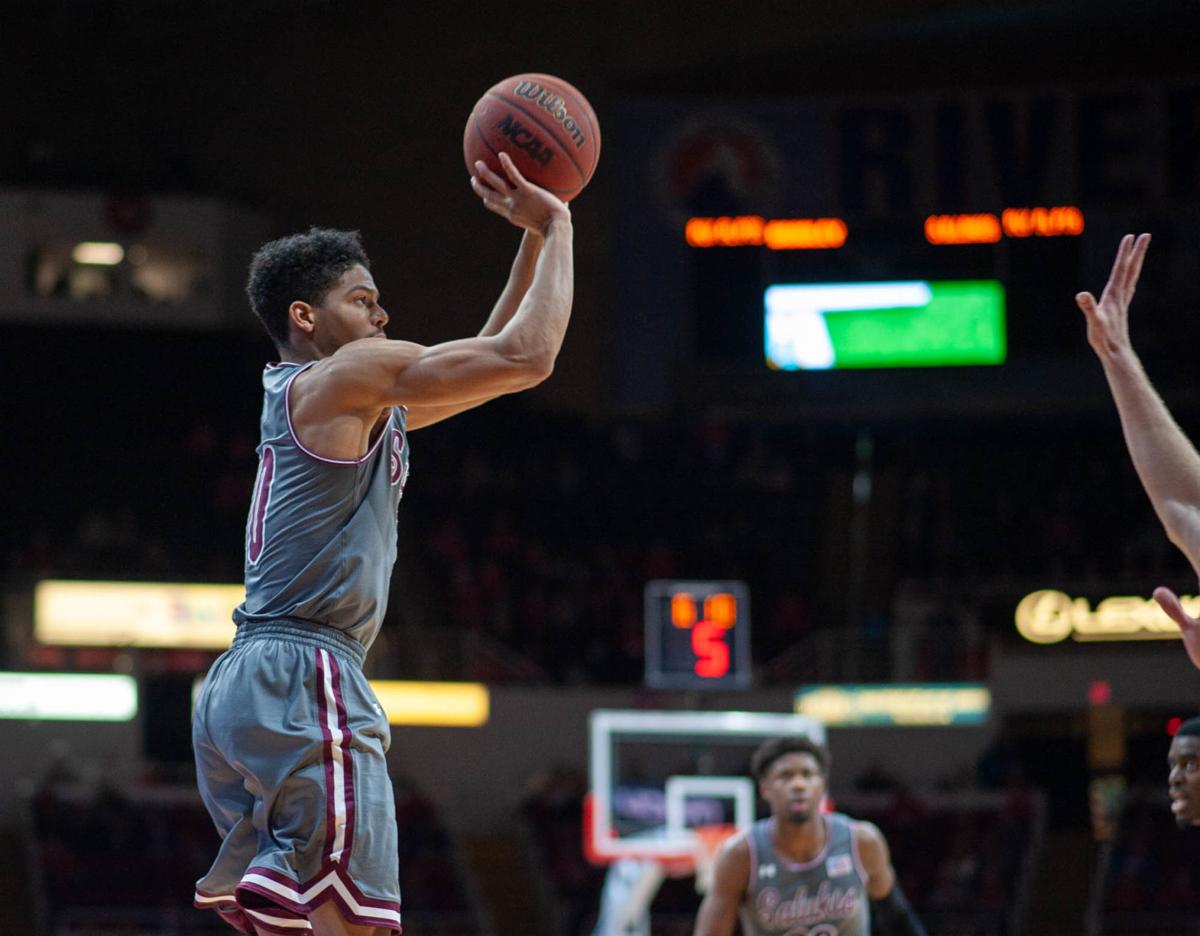 SIU guard Aaron Cook fires against Bradley in February in Peoria. Cook scored 14 points, grabbed three rebounds, and had a big block in the final seconds of the Salukis' 72-68 win over the Braves. 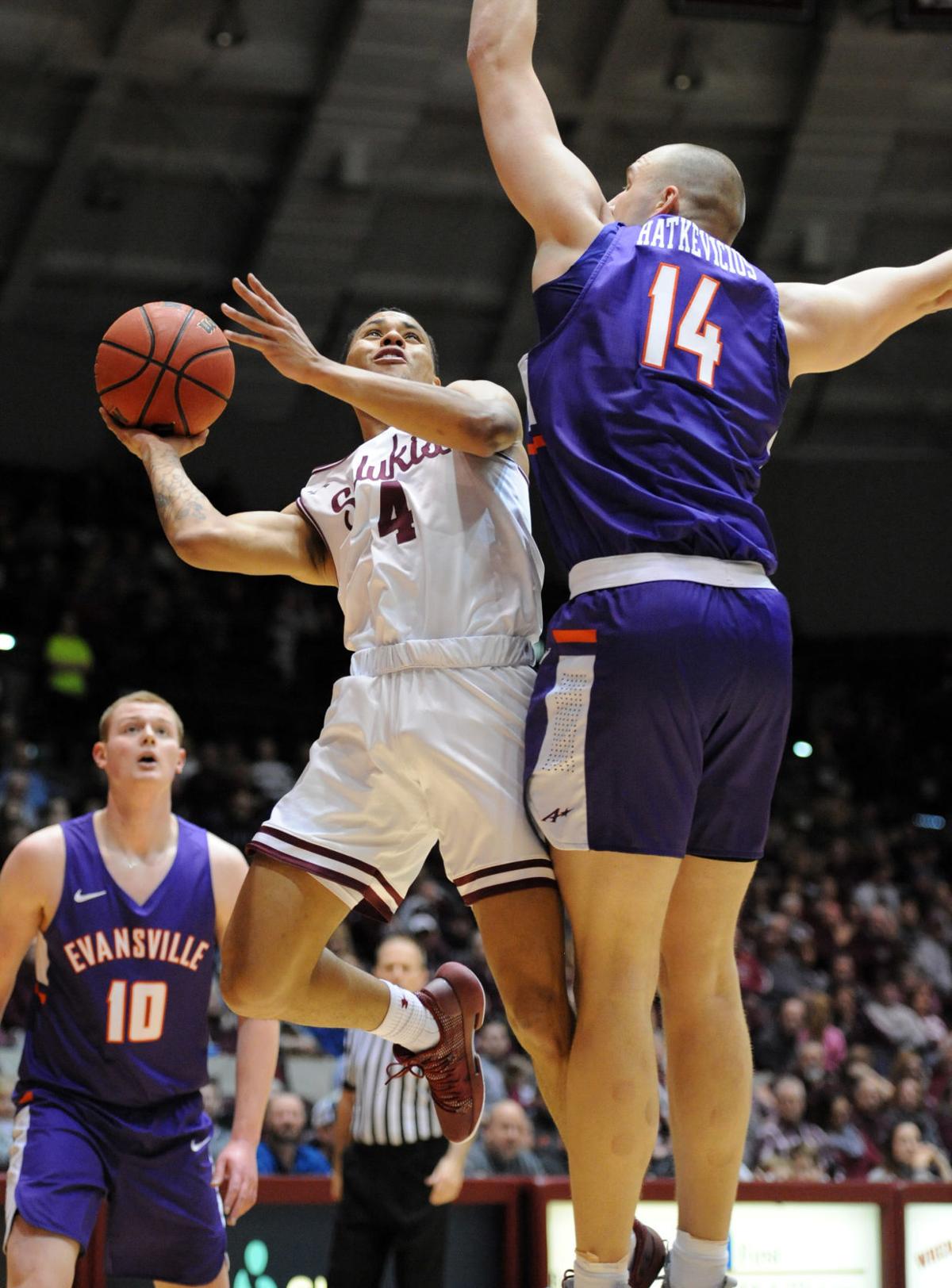 SIU guard Eric McGill puts up a shot against Evansville forward Deinius Chatevicius in February at SIU Arena in Carbondale.

ST. LOUIS — Before new SIU men's basketball coach Bryan Mullins could start turning around a program that hasn't reached the postseason since 2009, the players started down that path for him.

Cook, McGill and Benson, a graduate transfer center from Northwestern, are all in their final years, along with graduate transfer Ronnie Suggs. Cook and McGill started 32 and 23 games, respectively, during last season's 17-15 run. The 6-foot-2, 185-pound Cook was one of the few Salukis that could create his own shot, and finished the year with a career-high 118 assists.

With 10 newcomers, plus redshirt freshman forward Sekou Dembele, the two senior guards were good places to start for a rebuild.

"For me, I'm lucky just to have two seniors that played in the league, had success in the league," said Mullins, a Hall of Fame point guard who helped the Salukis reach their last two NCAA tournament appearances in 2007 and 2008. "For them, I think their work ethic is some of the best I've been around. They love to work. They love to be in the gym. For them to buy into everything that we're trying to teach them is great."

Mullins came from Loyola, where he was the associate head coach under Porter Moser for a team that won the last two MVC regular season titles. After going through the rounds at Media Day, Mullins, Cook and McGill headed back to Carbondale for the team's first official practice of the 2019-20 season.

Four players return from last season's squad, Cook, McGill, junior forward Brendon Gooch and redshirt freshman forward Sekou Dembele. Dembele is still recovering from a stress fracture in his left leg, and might not be on the court for another three or four weeks. Redshirt freshman guard Karrington Davis, a transfer from Nebraska who tore his Achilles last October, can work out but has not been cleared to practice with full contact, Mullins said. Sophomore guard Ben Harvey, a transfer from Eastern Illinois, can practice with the team but has to sit out this season per NCAA rules.

Here is a look at SIU's men's basketball team by the numbers:

11 — Newcomers, if you include redshirt freshman forward Sekou Dembele

CARBONDALE — Even under the old regime, Eau Claire North High School guard Dalton Banks always felt like SIU was a special place after an unof…

This Week in Saluki Athletics

CARBONDALE — The SIU men's basketball team's exhibition game against Minnesota State on Oct. 22 will be Community Appreciation Night, the scho…

Only half of the Missouri Valley Conference's top-10 scorers from last season are back in 2019-20.

CARBONDALE — Barry Hinson is returning to Oklahoma, not to run for governor, but to join his alma mater's men's basketball staff as an analyst.

SIU Men's Basketball | Mullins out for together defense in first year

CARBONDALE — Bryan Mullins played for SIU's men's basketball team with knee pads, cuts and bruises from 2005-09. Only the folded up stands of …

CARBONDALE — For the first time in seven years, SIU's men's basketball team was picked to finish last in the Missouri Valley Conference by lea…

SIU guard Aaron Cook fires against Bradley in February in Peoria. Cook scored 14 points, grabbed three rebounds, and had a big block in the final seconds of the Salukis' 72-68 win over the Braves.

SIU guard Eric McGill puts up a shot against Evansville forward Deinius Chatevicius in February at SIU Arena in Carbondale.