Become a Member
Read Today's E-edition
Share This
SIU Fooball | 4-Down Territory: Lenoir moves up career charts, and some bad history on Saturday
0 comments
Share this
1 of 2 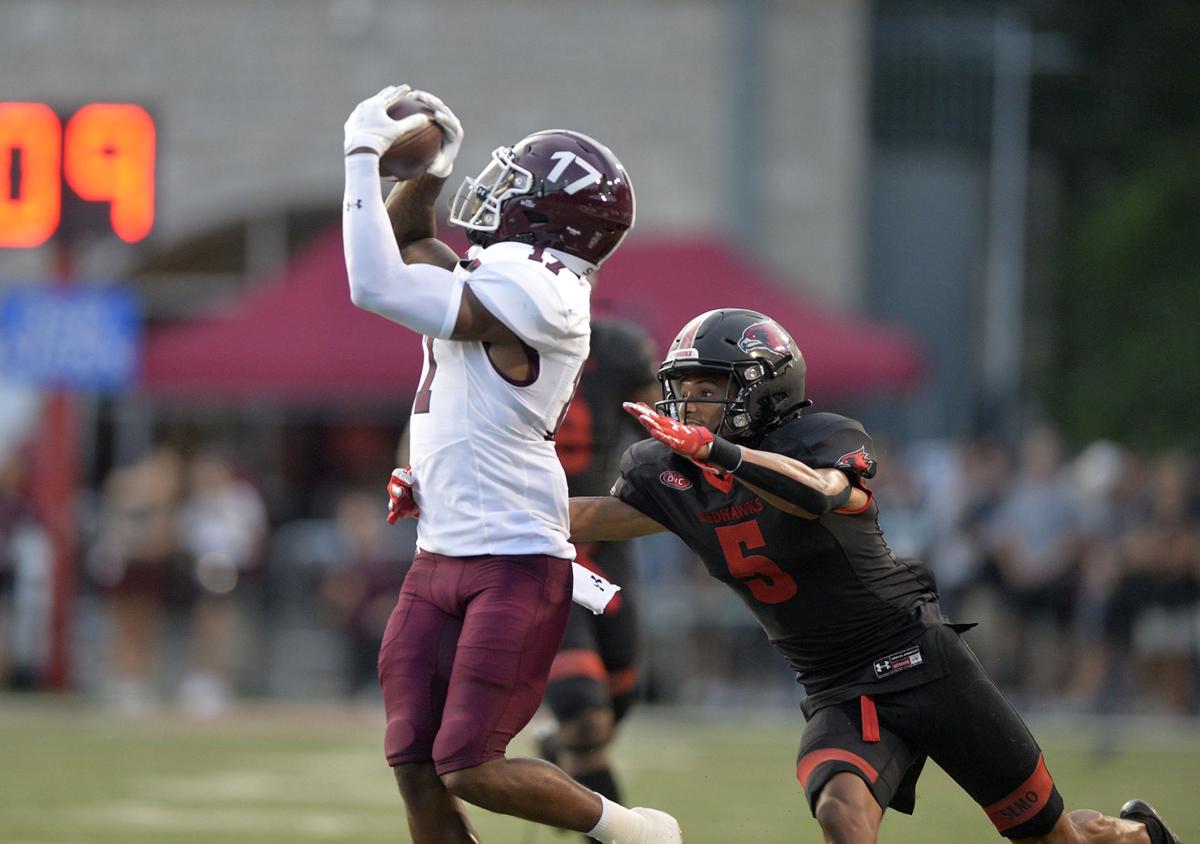 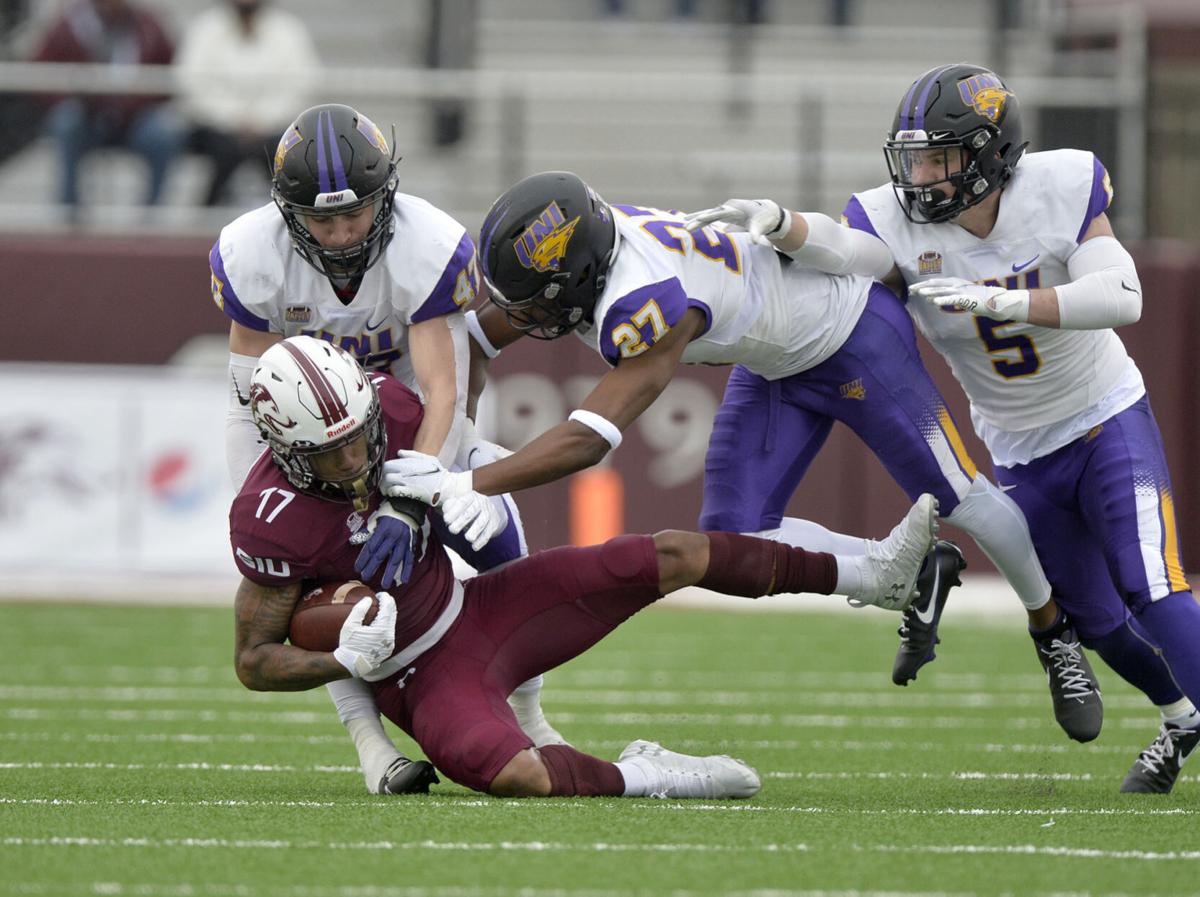 SIU wide receiver Landon Lenoir (17) is brought down by Northern Iowa defensive back Austin Evans (27) and linebacker Riley Van Wyhe (47) during the first quarter at Saluki Stadium on March 13 in Carbondale.

Landon Lenoir moves up the career charts, and some bad history for Saturday, all in today's Saluki Football 4-Down Territory.

For all the latest on SIU Football and the MVFC, tune in to the 4-Down Territory at thesouthern.com every Monday, Wednesday and Friday at 4 p.m. during the season. Digital subscriptions start at $1 for six months ($10.99 a month after that) or $3.77 for 13 weeks for Digital Platinum, for faster-loading web pages. Print and digital packages, which include The Southern Illinoisan in your mailbox every Tuesday through Saturday, start at $20 a month.

Online subscriptions give you 24-7 access to the best Salukis coverage around, including previews, features and game coverage of SIU's 2021 season. It also gives you access to the new Salukimania podcast, which airs every first Friday of the month. There is always more online!

First Down: Lenoir moves up to third in career catches

Lenoir had 54 of his 98 receiving yards Saturday against Dayton after catching the football, and moved up the Saluki career charts. The sixth-year wideout from Crete moved up to third on SIU's all-time receptions list, with 160, fourth place with 1,979 yards, and tied for 10th in receiving touchdowns after catching a 6-yard pass from Nic Baker. Lenoir's 11 receiving touchdowns are tied with five others, most recently LaSteven McKinney (2011-14).

Lenoir has caught at least one pass in 23 straight games heading into No. 7/8 SIU's MVFC opener against Illinois State (2-1) Saturday. The Salukis (2-1) and Redbirds kick off at 2 p.m. on Family Weekend.

Second Down: Bad history on Sept. 25

SIU is 41-38-3 lifetime against Illinois State, and won its only game against the Redbirds on Sept. 25. The Salukis are 4-8 lifetime on Sept. 25, dropping four of their last five.

Through three games, consensus All-American receiver Avante Cox is on pace for the first 1,000-yard receiving season since 1999. Cox has caught 12 passes for 325 yards and two touchdowns this fall season, an average of 108.3 yards per game. Cox's long of 99 yards, which came on the first offensive play of the season at Southeast Missouri State, will be tough to beat.

ISU is fourth in the MVFC in pass defense, allowing an average of 181.7 yards per game after taking on Butler, Western Michigan and Eastern Illinois. SIU is second in the league in passing offense, with a Valley Football-best eight touchdown passes. The Salukis average 296 yards through the air a game so far. Western Illinois leads the league at 315.7 yards a game after quarterback Connor Sampson threw for a career-high 425 yards against No. 6 Eastern Washington.

South Dakota left tackle Alex Jensen was named the Valley Football offensive lineman of the week on Monday, after helping lead the Coyotes past Cal Poly on the road, 48-14. USD scored 41 points, earned 452 total yards and 26 first downs in just the first half. The Coyotes ran for 353 yards, the most under coach Bob Nielson.

Illinois State coach Brock Spack talks to the media at his weekly press conference Tuesday, as the Redbirds prepare to take on No. 7/8 SIU Sat…

CARBONDALE — SIU football coach Nick Hill took two big positives from his squad's 55-3 win over Dayton on Saturday: no turnovers and the consi…

SIU Football | 4-Down Territory: Romeir Elliott could return, Salukis up to 7th in latest polls, and Chinn's 3 tackles

Running back Romeir Elliott could return this week from concussion-type symptoms, SIU rises to seventh in one of the two major polls, and Salu…

CARBONDALE — Nic Baker knew he had a free play.

If you don't know who Kevin Glajchen is, don't worry. The 6-foot-2, 270-pound senior from the San Francisco Bay area will introduce himself pr…

CARBONDALE — SIU's football team took one step forward and two steps backward most of the first three quarters against Illinois State, but cou…

SIU wide receiver Landon Lenoir (17) is brought down by Northern Iowa defensive back Austin Evans (27) and linebacker Riley Van Wyhe (47) during the first quarter at Saluki Stadium on March 13 in Carbondale.