Become a Member
Read Today's E-edition
Share This
SIU Football | 4-Down Territory: Big-play defense, the WIU series and the end of Ceasar's Saluki career
0 comments
Share this
1 of 2 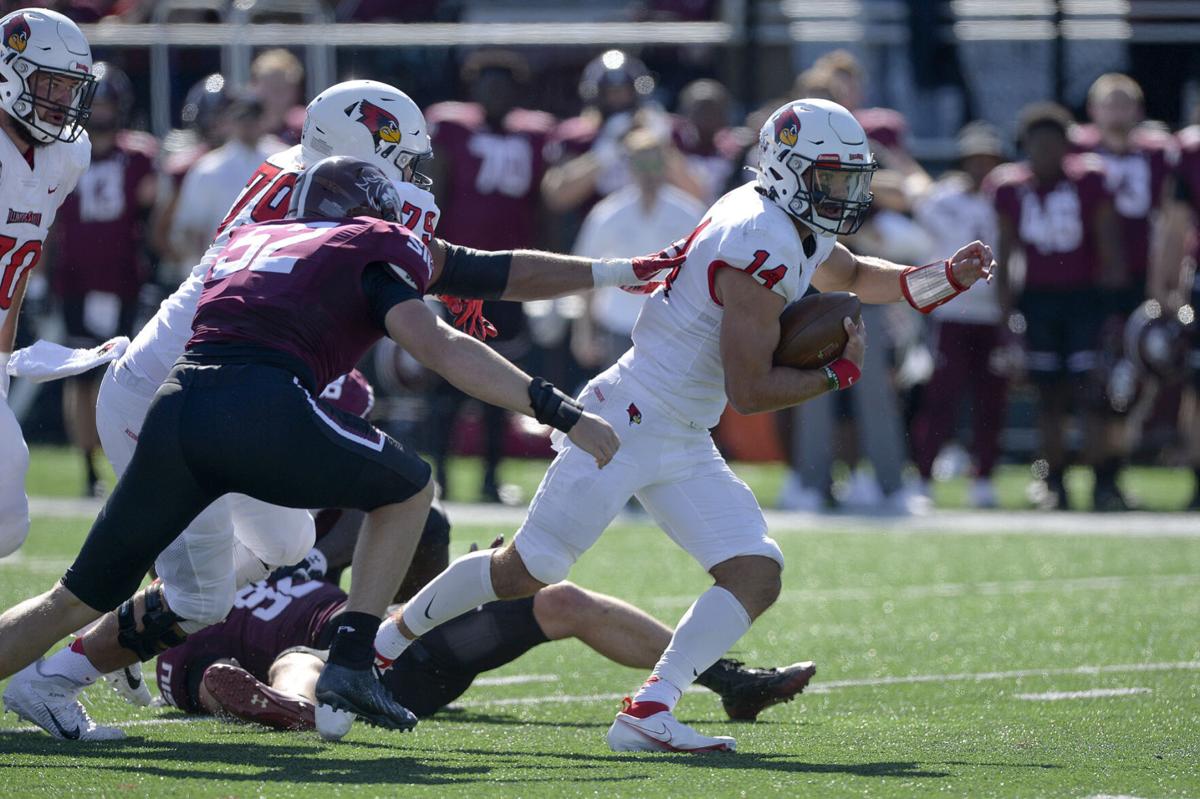 Illinois State quarterback Jackson Waring (14) scrambles during the second quarter against Southern Illinois at Saluki Stadium on Saturday in Carbondale. 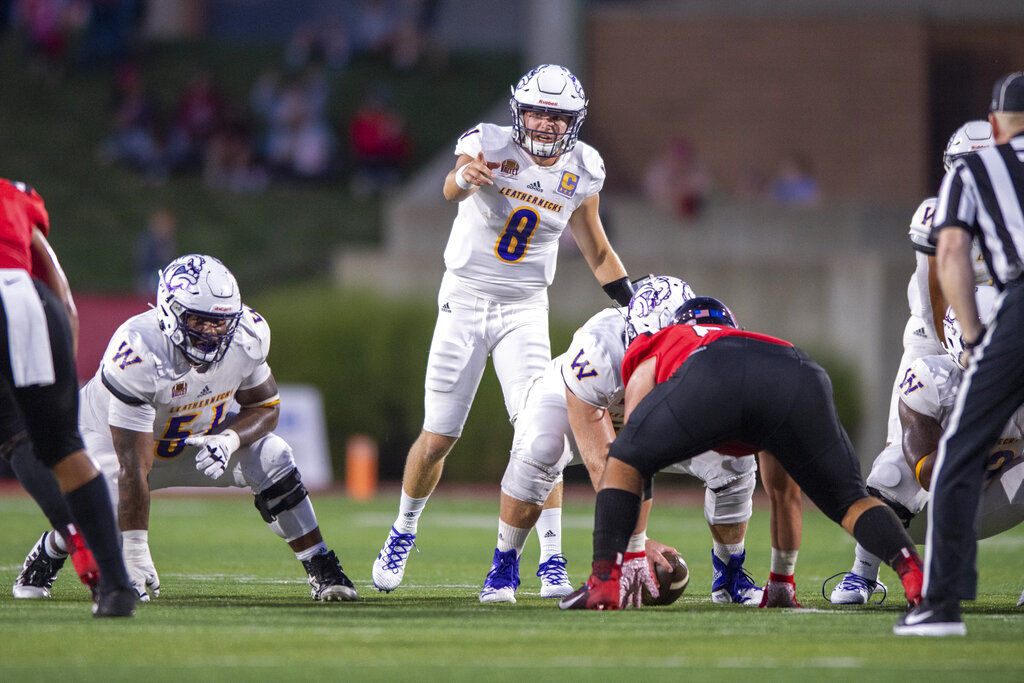 Western Illinois quarterback Connor Sampson (8) calls a play against Ball State on Sept. 2 in Muncie, Ind. Sampson has thrown for four touchdowns in consecutive games heading into Saturday's game against No. 7 SIU in Macomb.

In today's Saluki Football 4-Down Territory, a look at SIU's big-play defense, its series with Western Illinois, and the end of an All-American's career.

For all the latest on SIU Football and the MVFC, tune in to the 4-Down Territory at thesouthern.com every Monday, Wednesday and Friday at 4 p.m. during the season. Digital subscriptions start at $1 for six months ($10.99 a month after that) or $3.77 for 13 weeks for Digital Platinum, for faster-loading web pages. Print and digital packages, which include The Southern Illinoisan in your mailbox every Tuesday through Saturday, start at $32 a month.

First Down: Making them snap it again

Opponents have scored 72 points against No. 7 SIU (3-1, 1-0 MVFC) in four games this season, and have had to work for all of them. The Salukis have allowed only six rushing touchdowns all season, and only two passing touchdowns.

SIU's defense has been hard to score on in one play. Coach Nick Hill and defensive coordinator put a big emphasis on not giving up explosive plays for touchdowns, and so far, the longest scoring play for any team this season was a 15-yard touchdown pass by Southeast Missouri State. The Redhawks also had a 6-yard scoring pass in their 47-21 loss to the Salukis in the season opener.

Western Illinois (1-3, 1-0) may have the best passing attack SIU will see this season. Quarterback Connor Sampson's 1,219 passing yards and 10 passing touchdowns both lead the Valley. The 6-foot-3, 215-pound senior has completed 68.5% of his passes. Dennis Houston has five of those touchdown catches and 565 yards in four games, with a league-best 37 receptions. Tony Tate (20 receptions, 112 yards) and running back Ludwick Choquette (19 catches for 185 yards and 2 TDs) all have 19 or more catches.

Second Down: The streaky SIU-WIU relationship

SIU and WIU have an incredibly streaky relationship, in a series that dates back to before World War II. The Salukis, who were known as the Maroons back then (they were renamed the Salukis in 1951), beat WIU 45-0 in the first meeting back in 1933. The two teams tied 7-7 in their second meeting, in 1936.

WIU leads the overall series 36-24-4, including 18-11-3 in Macomb, ahead of Saturday's game at Hanson Field. SIU hasn't done very well against the Leathernecks at home, either, going 13-18-1 in Carbondale.

Third Down: Ceasar's 5-year Saluki career comes to an end

Cornerback James Ceasar, who played his first three years at SIU, transferred to Division II Ferris State, where he was named an All-American, and had an All-American season in the spring with the Salukis, has played his last game with this school. Ceasar had four tackles and broke up a pass at Kansas State Sept. 11, but suffered a season-ending shoulder injury. Even though he's a sixth-year senior via the NCAA's COVID-19 regulations, he could have pursued another medical redshirt but has elected to begin training for the NFL draft after he recovers.

Ceasar returned a fumble for a touchdown as a true freshman and was a preseason all-conference defensive back this fall. His 25 pass breakups are tied for the fourth-most in SIU history. David Miller, a transfer from Navy, has filled in for him since he was injured.

Fourth Down: UNI gets it back

Northern Iowa (2-1) has scored 88 points in three games partly because of its defense. The No. 13/15 Panthers have recovered five fumbles (eighth-best in the nation) and intercepted six passes (10th-best in the country) heading into Saturday's Homecoming game against Youngstown State (1-2, 0-1). UNI forced six turnovers at Sacramento State, the most since getting six against Division II Central State in 2012.

YSU has turned it over three times in three games, and forced three (two fumbles and one interception).

SIU Football | 4-Down Territory: Garrett on the mend, and a new home for Harper

In today's Saluki Football 4-Down Territory, an update on fullback Jacob Garrett and a new home for former SIU cornerback Madre Harper in the NFL.

SIU Football | Leathernecks can air it out in a hurry

CARBONDALE — Without one of the main cogs in its running game, SIU's football team found the Midas touch against Illinois State on Saturday.

Donnavan Spencer's coming out party against Illinois State, the Saluki comeback, and Javon Williams Jr. ties an SIU great, all in today's Salu…

CARBONDALE — Western Illinois picked up its first win of the season last weekend at Youngstown State, and needed a Missouri Valley Football Co…

Illinois State quarterback Jackson Waring (14) scrambles during the second quarter against Southern Illinois at Saluki Stadium on Saturday in Carbondale.

Western Illinois quarterback Connor Sampson (8) calls a play against Ball State on Sept. 2 in Muncie, Ind. Sampson has thrown for four touchdowns in consecutive games heading into Saturday's game against No. 7 SIU in Macomb.