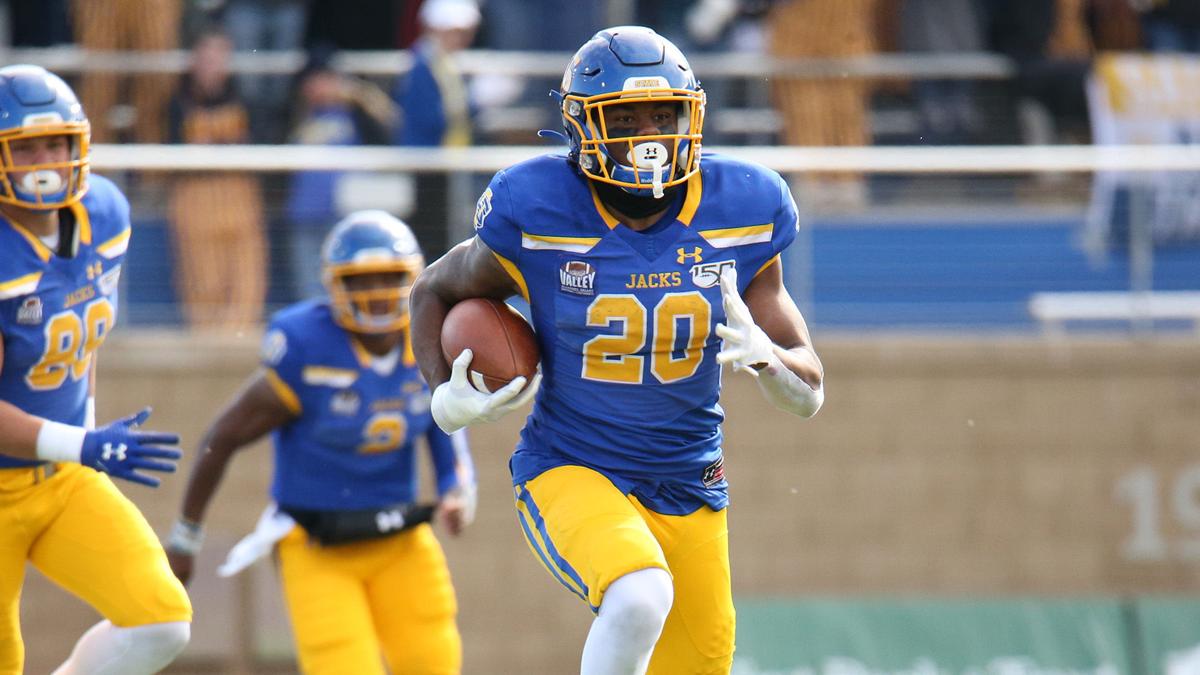 South Dakota State running back Pierre Strong Jr. (20) runs the ball. Strong, a member of the watch list for the Walter Payton Award, has rushed for five touchdowns and 486 yards on just 55 carries this season for the No. 2/3 Jackrabbits. SDSU hosts No. 7 SIU on Saturday. 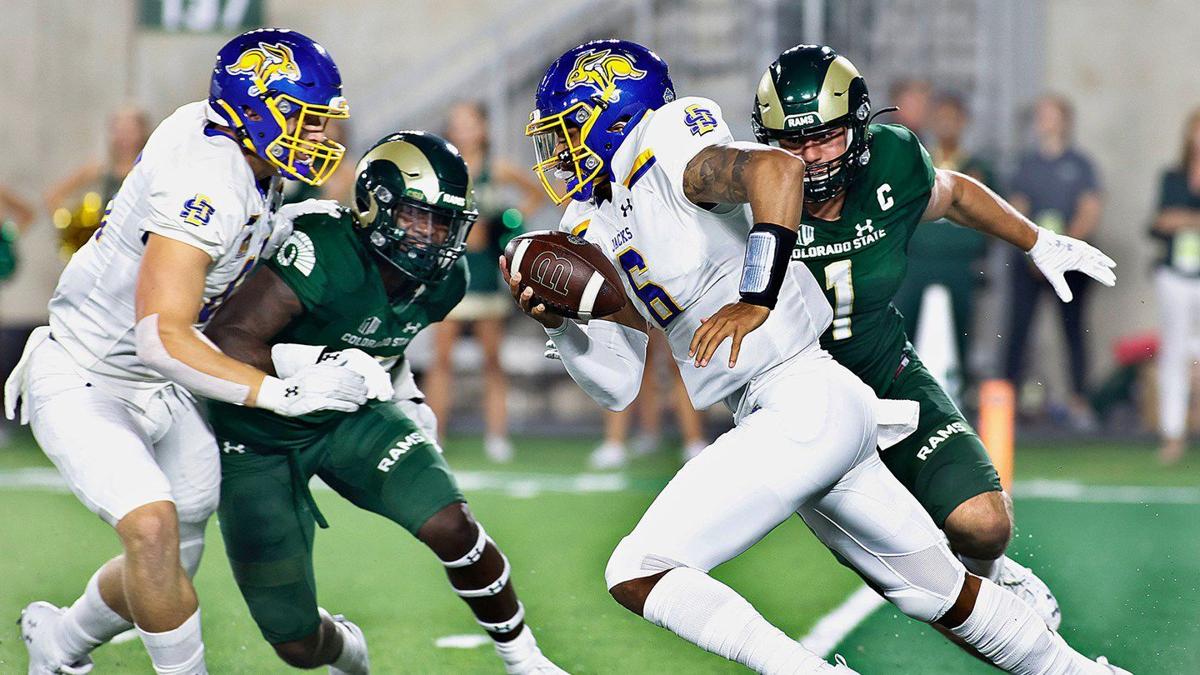 South Dakota State quarterback Chris Oladokun runs at Colorado State in this file photo from Sept. 3. Oladokun threw for two touchdowns and ran for another in the third-ranked Jackrabbits' 42-23 win in Fort Collins, Colo.

Five of the Jackrabbits' 24 offensive touchdowns went for more than 25 yards in their 4-0 start. SDSU's first touchdown of the season, a 48-yard run by Walter Payton Award nominee Pierre Strong Jr., came against an FBS opponent, Colorado State, which the Jackrabbits beat soundly 42-23 on the road. If the seventh-ranked Salukis (4-1, 2-0 Missouri Valley Football Conference) hope to snap a seven-game losing streak against SDSU, it'll have to do what its defense has done best this season: make them snap it repeatedly to score.

"We've gotta continue to do the same things that we preach all the time," SIU coach Nick Hill said. "(Strong) is gonna have some yards. We just gotta get him tackled. He really lives off explosive plays. I mean, he's got a knack. When you look back to his big days, he rips off some big runs, and so, we gotta tackle well. We've gotta be in position."

Strong, a 5-foot-11, 205-pound senior, is averaging 8.8 yards a carry this season after four games. Strong, now SDSU's featured back with the loss of Isaiah Davis (125 yards, 1 TD) to an injury, has only run the ball 55 times this season for the preseason MVFC favorites. The Jackrabbits rolled over Division II Lindenwood (Missouri) 52-7 a week after beating Colorado State, and shut out Indiana State 44-0 in both teams' league opener Sept. 25. Last weekend, against Division I-transitioning Dixie State, they led 35-0 and won 55-7.

Strong has 486 yards on his 55 carries, with five touchdowns. He has been particularly difficult for the Salukis to corral. SDSU (4-0, 1-0) didn't need him to run for 392 yards and five touchdowns in the first of two spring meetings earlier this year. Davis had 150 yards rushing and three touchdowns and quarterback Mark Gronowski, the MVFC Freshman of the Year, Newcomer of the Year and Offensive Player of the Year, had 103 yards rushing and two scores. Strong went for 229 yards and a touchdown on 20 carries in a win over SIU in 2019, with one run going 64 yards. In 2018, he had 188 yards on 14 carries with three touchdowns and a 72-yarder.

In three games against SIU, Strong has rushed for 465 yards and four touchdowns off 43 carries, an average of 10.8 yards a carry.

SDSU's offensive line, obviously, has a lot to do with that. Center Wes Genant (6-4, 300), right guard Eagn Lickiss (6-4, 310) and left tackle Aaron Johnson (6-6, 300) are all seniors. Left guard Mason McCormick (6-4, 310) and right tackle Garret Greenfield (6-6, 296), a preseason all-conference first team pick, are juniors. Greenfield was the league's offensive lineman of the week after the win over Indiana State.

SDSU averaged 5.9 yards per play against Dixie State, and average 7.8 yards a play entering Saturday's game against SIU at Dykhouse Stadium in Brookings, South Dakota. The Jackrabbits haven't turned it over this season (they're plus-8 in turnover margin) with new quarterback Chris Oladokun, and are third in the FCS in both scoring offense (48.2 points per game) and scoring defense (9.25 points per game allowed).

The Salukis have allowed 102 points in their five games this season, but haven't allowed an offensive scoring play over 27 yards. Western Illinois receiver Dallas Daniels' 27-yard touchdown pass from Connor Sampson early in the fourth quarter of SIU's 31-30 overtime win was the longest scoring play on offense the Salukis allowed all season. SDSU has put together scoring drives of over 80 yards this season, but hasn't had to do it too much this season with Strong, Davis, and 6-3 receivers Jadon and Jaxon Janke.

"We haven't had to do that very often. We've had a lot of big plays, even against Colorado State in the opener," SDSU coach John Stiegelmeier said. "Credit their defense. Play zone defense, keep people inside. When the ball's supposed to bounce, make it run lateral. It's gonna be Jadon Janke, it's gonna be Jaxon Janke against one of their DBs. One of those guys is gonna have to make a play."

Shortly after Western Illinois scored a touchdown in overtime Saturday night against No. 7 SIU, it lined up for the potentially-winning two-po…

CARBONDALE — If there was any doubt SIU's football team couldn't compete with South Dakota State, it left in the second half of the FCS quarte…

Four of the five conference games this weekend will feature a top 25 team, with two games between top-15 teams.

BROOKINGS, S.D. — Nic Baker threw for 359 yards and four touchdowns at No. 2/3 South Dakota State Saturday, but it might have been about 15 ya…

How did SIU and SDSU combine for 83 points? Find out in our How They Scored.

CARBONDALE — The SIU football team moved up four spots in the Stats Perform top 25 poll and three in the coaches list Monday to No. 4 after Sa…

South Dakota State running back Pierre Strong Jr. (20) runs the ball. Strong, a member of the watch list for the Walter Payton Award, has rushed for five touchdowns and 486 yards on just 55 carries this season for the No. 2/3 Jackrabbits. SDSU hosts No. 7 SIU on Saturday.

South Dakota State quarterback Chris Oladokun runs at Colorado State in this file photo from Sept. 3. Oladokun threw for two touchdowns and ran for another in the third-ranked Jackrabbits' 42-23 win in Fort Collins, Colo.