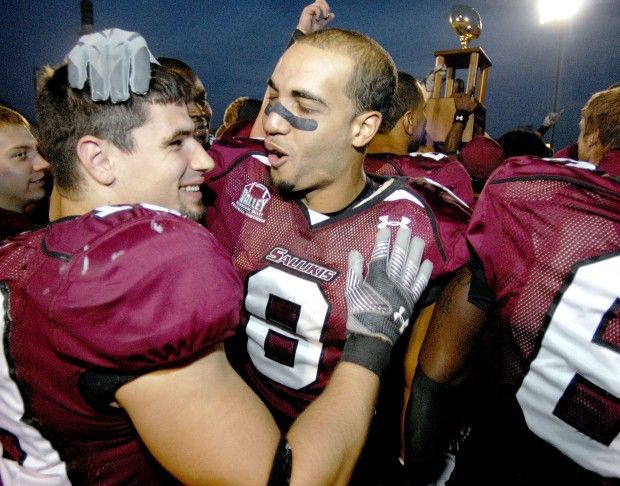 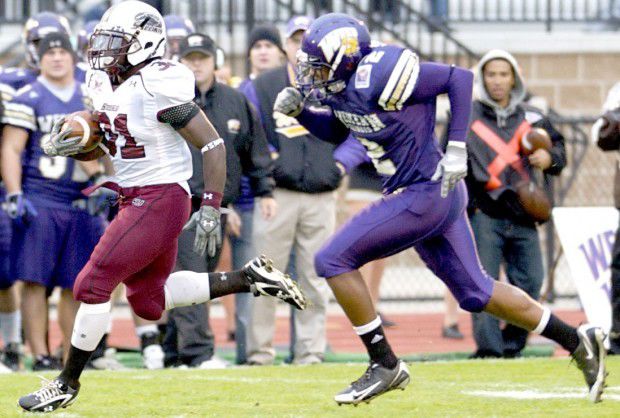 Southern Illinois' Deji Karim sprints in front of Western Illinois' Ed Roberts during the first half of the teams game on Saturday, Oct. 3, 2009, in Macomb.

CARBONDALE — Deji Karim was No. 2 on the depth chart, behind Richard White, before SIU's football team began the 2009 season at FBS program Marshall.

The senior running back went for a modest 67 yards rushing on 16 carries in the Salukis' turnover-plagued 31-28 loss at Marshall, but there was nothing modest about the rest of Karim's season. He returned a kickoff 82 yards for a touchdown against Division II Southwest Baptist and added a 6-yard scoring run and 61-yard touchdown run in the first of 11 straight victories by the Missouri Valley Football Conference champs. Karim went on to lead the league in all-purpose yardage and helped the Salukis become the first team in the new nine-team league to go 8-0.

"Our offense finished as the No. 1 scoring offense in the league and our defense was second in scoring defense," former SIU coach Dale Lennon said. "That, overall, showed you that there was pretty good balance on our team. Offensively, our biggest thing was the emergence of Deji Karim."

Karim, a future NFL kick returner/running back for the Jaguars, Colts and Texans, rushed for 1,693 yards and 18 touchdowns and also caught a touchdown pass. He was named the MVFC Offensive Player of the Year and was drafted by the Jaguars.

"By the second game, Deji was having some outstanding runs for us, so it didn't take long (to switch)," Lennon said. "That was that big-play capability, and why he ended up leading the conference in scoring offense."

SIU, which reached No. 1 in the nation near the end of the regular season, reached the playoffs with two quarterbacks. Chris Dieker was injured early in the year and Paul McIntosh took over. McIntosh threw for 888 yards and eight touchdowns, with three interceptions in nine games — six of them starts — and finished as the team's second-leading rusher (588 yards, six touchdowns). If not for a shoulder injury that never seemed to completely heal, Lennon believed McIntosh may have taken the program back to the postseason.

The 2009 season was SIU's last postseason appearance, as this year's squad was left out of the field after going 7-5.

"He transferred in '08 after school had started, so we got him in at the last second," Lennon said. "Very smart. I always think with Paul what could have been with his career, had he had a chance to stay healthy. Even for our success as a football program, what he could have brought with his performance."

Former quarterback Joe Allaria was SIU's leading receiver in 2009, with 52 catches, 692 yards and four scores. SIU's offense averaged 34 points per game and allowed an average of 15.9 points per game, with the likes of safety Marty Rodgers, linebackers Brandin Jordan, Ryan Patton, Connor James and Kyle Walker, and cornerback Korey Lindsey.  The Salukis had 36.0 sacks, 23 interceptions and 10 fumble recoveries in 2009.

"We just competed in everything we did, from the weight room to practice, and when we got to games it was so easy to lock in and compete with the guys," said Rodgers, who now coaches SIU's cornerbacks. "We all kind of understood the expectations when we stepped on the field for practice, as far as 'This is what it has to look like. These are the results you're striving for on game day.'"

SIU was also special on special teams. Kicker Kyle Daugherty, the program's second all-time leading scorer behind Hall of Famer Craig Coffin, hit 19 of 25 field goals with a long of 49. Punter Scott Ravanesi averaged 42.4 yards per punt and had 11 kicks over 50 yards. Karim averaged 30.9 yards per kickoff return, and Lindsey had 124 punt return yards by the end of the season.

CARBONDALE — Two former Saluki football players have their teams on the brink of the NCAA Division II semifinals.

Former SIU quarterback Austin Reed throws a pass for Division II West Florida this season. Reed transferred after spring ball in 2019 and has …

Colorado transfer could step in at safety for SIU

CARBONDALE — Players come to SIU for a lot of reasons. Aaron Maddox wanted to play with his brother, SIU backup cornerback Christian Maddox, a…

Southern Illinois' Deji Karim sprints in front of Western Illinois' Ed Roberts during the first half of the teams game on Saturday, Oct. 3, 2009, in Macomb.