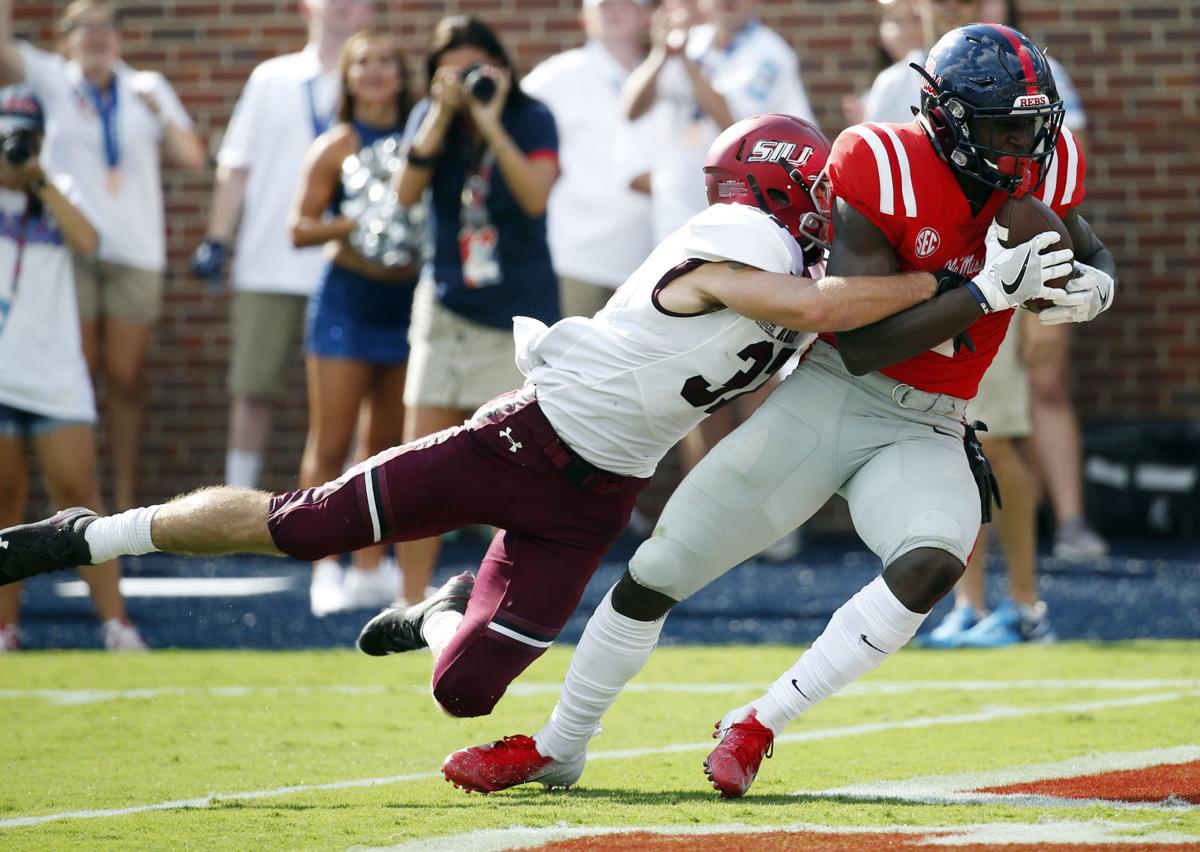 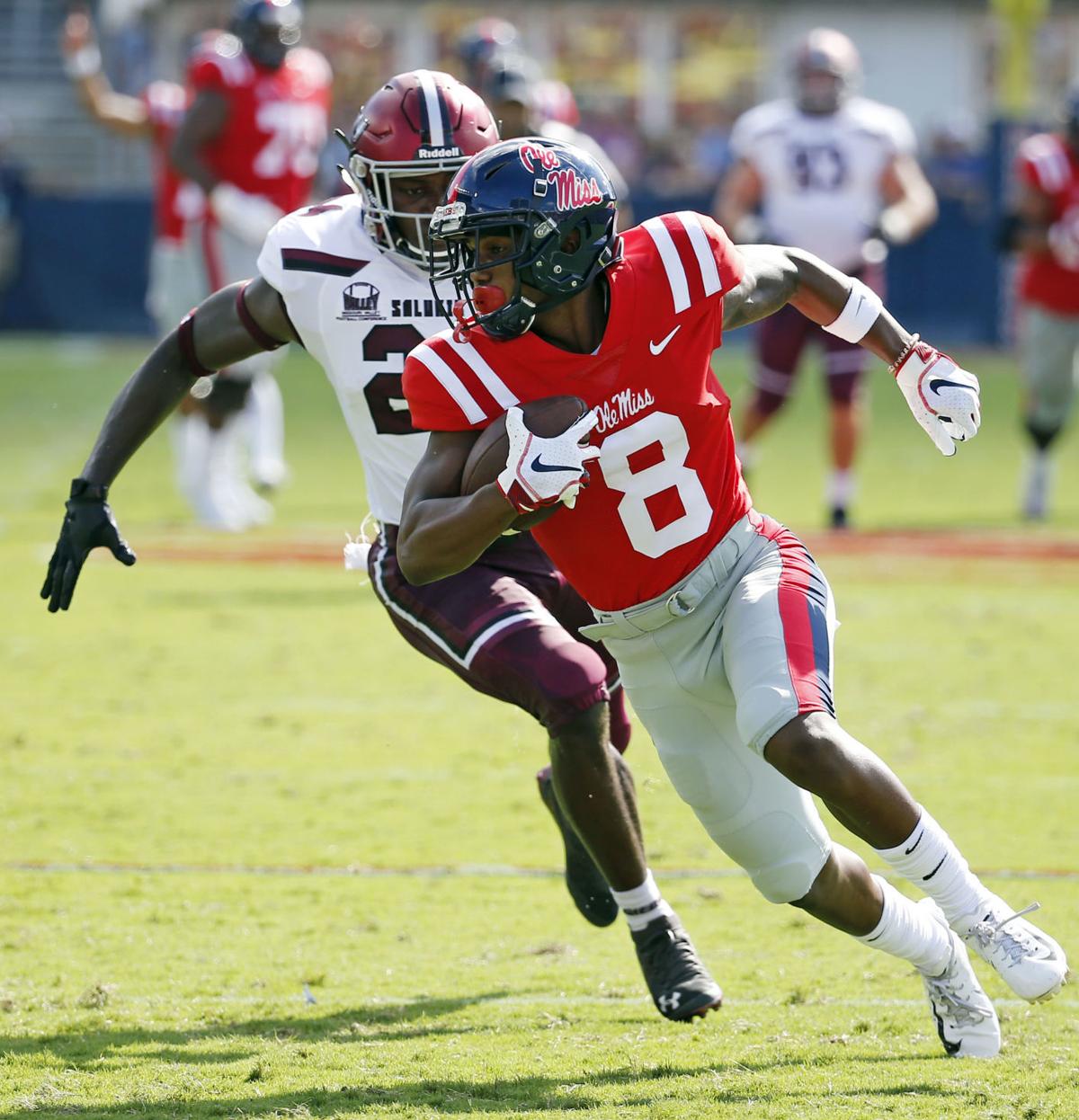 Mississippi wide receiver Elijah Moore outruns a Southern Illinois defender for a 50-yard touchdown reception during a game last season in Oxford, Mississippi. SIU trailed Ole Miss 49-41 before losing 76-41, just one in a series of close calls against FBS opponents. 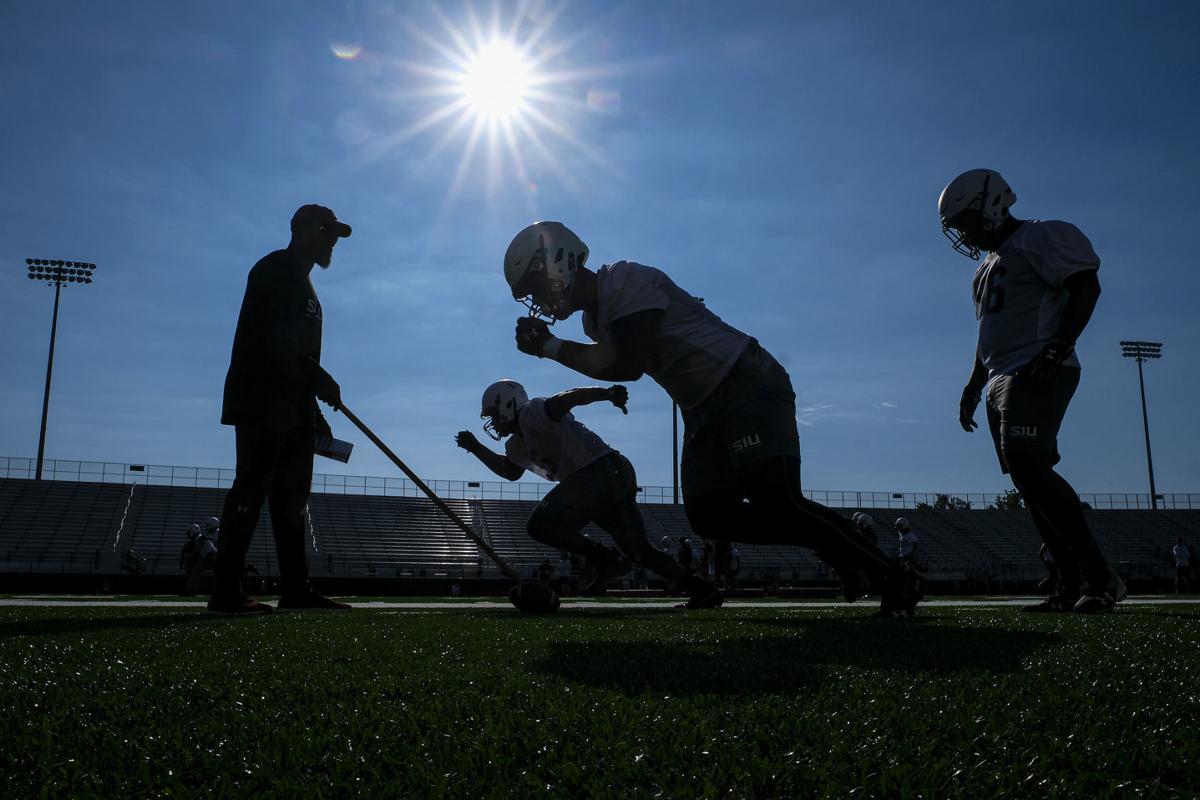 CARBONDALE — SIU football coach Nick Hill has to look no further than his own league to see how playing two FBS opponents in the same season could be daunting, but is not a death sentence for the postseason.

The Salukis haven't reached the FCS playoffs since winning the Missouri Valley Football Conference in 2008 and 2009, and have two FBS opponents for the first time since 1993. After opening at Southeast Missouri State, which was picked 17th in the STATS preseason poll Monday, SIU plays at UMass Sept. 7 and at Arkansas State in Week 4, Sept. 21, as part of a seven-game road schedule.

Northern Iowa opened the 2014 season at Iowa and Hawaii, but came back to win eight of its last 10 games of the regular season and reach the playoffs.

"That is extremely challenging for your head coach, and for your program," said Farley, Northern Iowa's leader since 2001. "How you try to set things up is very important because of the wear and tear of those games. It's not those games. It's the games after. It's the midseason, the second half of the season, that you have to really look towards."

SIU hasn't beaten an FBS opponent since the last time Hill was the starting quarterback, in 2007, when the Salukis went to Dekalb and beat Northern Illinois 34-31. Hill also led SIU to a 35-28 win at Indiana in 2006 with four touchdown passes. It was the first win by a Gateway Conference/MVFC team over a Big 10 squad. Since then, the Salukis have had a series of close calls.

With a 12-game schedule for the first time since 2014, and a regional rival lurking later this month, Hill said he can't look too far ahead.

"The FBS games will come when they come, but our first game is Southeast Missouri," he said. "We've got 12 games this year, that's different than it's been for us, but it's just like an extra week in the schedule. We have a plan going into training camp on how you want to install and get your team prepared for every situation, get your base philosophies in, and towards the end of those practices you start to gear towards your first game. I think if you're preparing that far out, things change."

A team from the MVFC has beaten at least one FBS program in nine straight seasons dating back to 2010. Illinois State beat Colorado State on the road last year, 35-19. The league has 45 victories over FBS programs since 1985, when it was known as the Gateway Conference.

UMass, an independent that used to compete as an FCS program in the Colonial Athletic Association (CAA), is coming off a 4-8 season and has a new head coach in Walt Bell. Bell was the offensive coordinator at Florida State last year. Arkansas State was picked to finish second in its division in the Sun Belt Conference preseason poll. The Red Wolves went 8-5 overall and 5-3 in the Sun Belt last season. Five players were named to the Sun Belt's preseason first team Monday, as voted on by the league's 10 coaches and select media, and released during media day festivities.

Here is a quick look at SIU's three FBS victories. The Salukis were a Division I-AA program (now known as FCS) since 1982:

CARBONDALE — Saluki Football single-game tickets went on sale Thursday, with prices ranging from $12 to $20 for the five home games this season.

CARBONDALE — The remnants of last year's record-breaking Saluki defense hang on the walls of the locker room, but they're not exactly positive…

Mississippi wide receiver Elijah Moore outruns a Southern Illinois defender for a 50-yard touchdown reception during a game last season in Oxford, Mississippi. SIU trailed Ole Miss 49-41 before losing 76-41, just one in a series of close calls against FBS opponents.