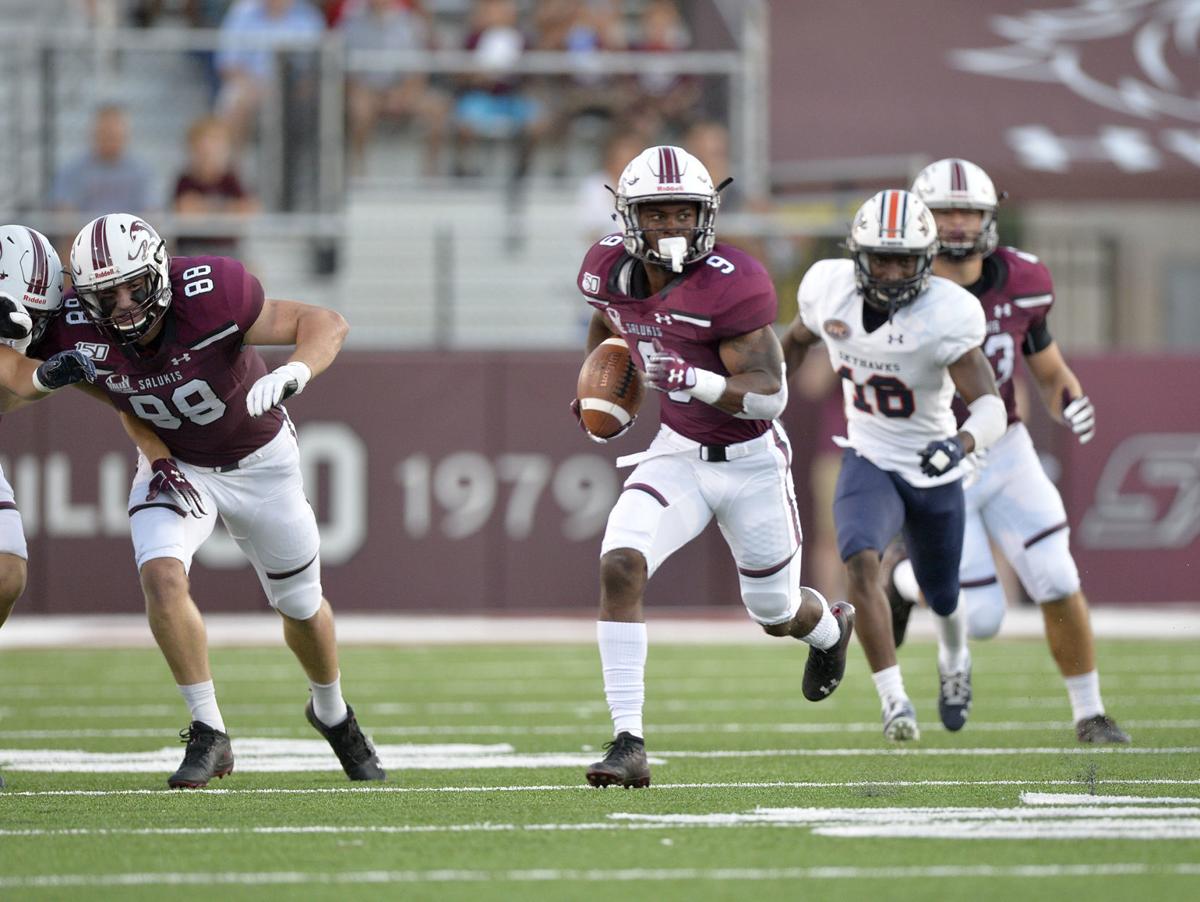 SIU running back D.J. Davis (9) returns a kickoff for 31 yards during the first quarter of a game last season against UT-Martin at Saluki Stadium in Carbondale. 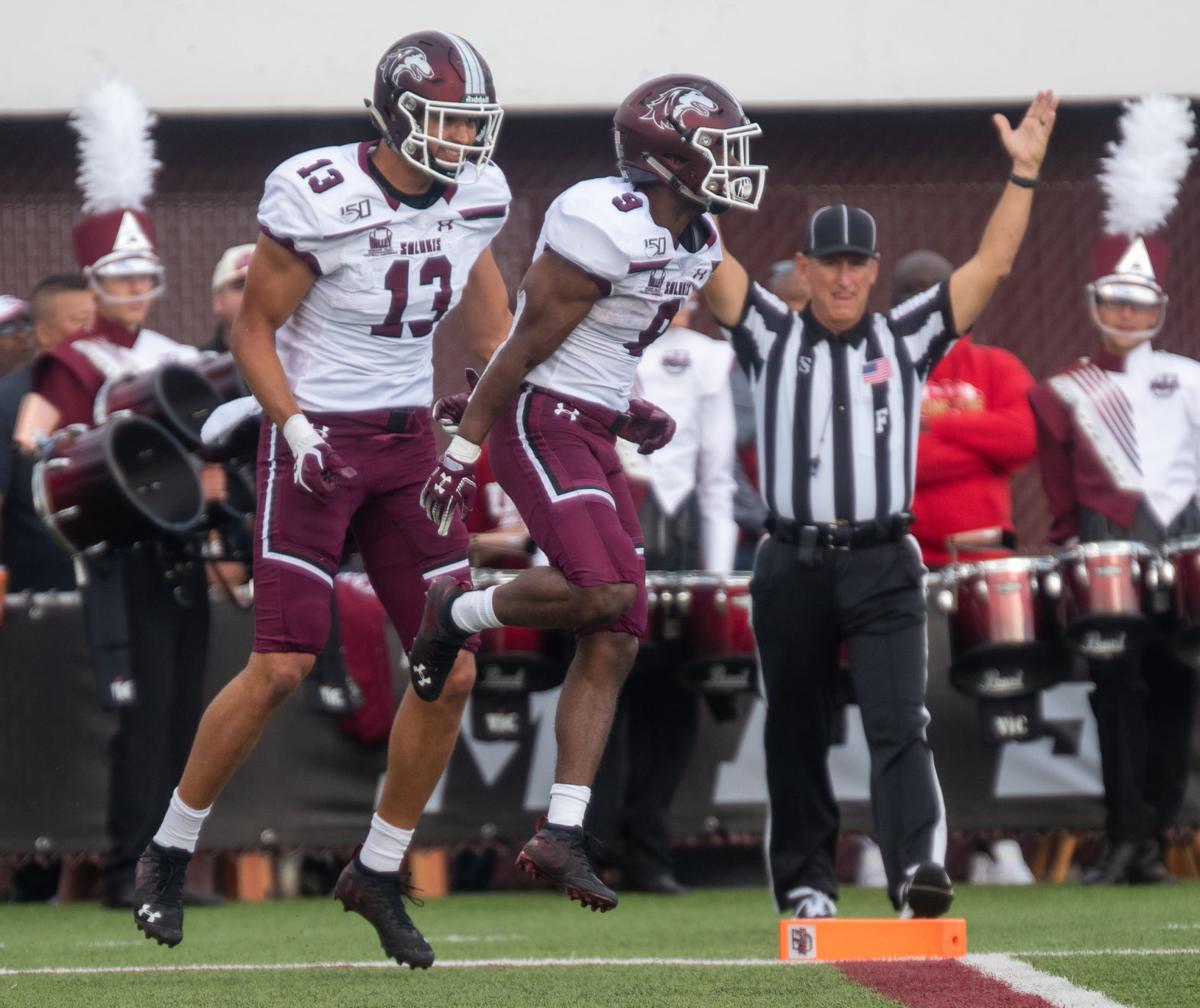 CARBONDALE — Once the pain subsided a bit, and D.J. Davis was able to think about the implications of his dislocated elbow at Centennial Bank Stadium instead of the actual elbow, he started to believe he would come back.

The question for the all-conference running back was when he would come back from an injury that could have been season-ending at Arkansas State on Sept. 21. The 5-foot-8, 170-pound senior from Pompano Beach, Florida, has been incredibly durable during his four-year career, starting 23 of 40 games with an SIU-record 1,798 kickoff return yards. Davis crossed the 5,000 all-purpose yards mark last weekend at Indiana State, when SIU (5-4, 3-2 Missouri Valley Football Conference) captured its third straight victory, 23-14.

"It's just being humble. Having a humble mindset," Davis said. "Like I said, keep the faith, keep thanking God and really it's just about getting these wins and stacking on top of each other, and doing what I gotta do to help my team get these wins. That's all it is. They gonna stack the box sometimes. They gonna cover our receivers sometimes, but you just gotta execute the play that's called."

Davis moved into sixth place in school history in rushing (2,388 yards) after toughing out a season-high 160 at Memorial Stadium in Terre Haute, Indiana, on 22 carries. It was his third game this season with 22 or more carries. Davis has made a living out of getting four yards when there are four yards to get, or stretching a run out even more.

"When you gotta get those four yards, and like (running backs) coach (Nate Griffin) said, they know what we're doing," Davis said. "We still gotta be physical, outphysical them, and get those four yards that we need, and that's all there is to it. Keep chippin' away, keep playing hard and sticking to the details, and it's gonna work out."

SIU coach Nick Hill will keep giving him chances when the Salukis host Missouri State (1-7, 1-4) Saturday with a chance to earn the program's first four-game winning streak since 2009, when it won 11 straight games.

"If you give it to him enough, he's gonna make you look good. He's gonna make that guy miss. He's gonna run through a tackle, and Romeir (Elliott) is the same way," Hill said. "Romeir had a couple big runs for us. He doesn't get as many carries because of D.J., but those two are gonna wear you down and you're gonna pop some big runs. You have to be OK, if they're blocked up and you can get three and you go get four, you stay ahead of the chains. That's what makes offenses go."

SIU features the fifth-best scoring offense in the Valley (27.8 points per game). The Salukis' 218.1 yards a game on the ground rank 14th in the country and third in the MVFC. Their passing offense — seventh in the league and 94th in the country — has taken a backseat to the three-headed attack of Davis, Elliott and Valley Freshman of the Year candidate Javon Williams Jr. Williams has scored 15 touchdowns as a redshirt freshman, 13 on the ground and two receiving.

MSU has lost four straight games and hasn't won a game in regulation this season. The Bears' only win this year came at Western Illinois in overtime Oct. 5, 37-31. SIU has won 12 of the last 16 games against MSU, and gone 6-2 at home during that stretch.

CARBONDALE — Two days after SIU safety Jeremy Chinn accepted an invitation to play in the prestigious Senior Bowl, he was named on the watch l…

CARBONDALE — Missouri State has struggled to protect quarterback Peyton Huslig, giving up 18 sacks in eight games, but the senior signal-calle…

SIU running back D.J. Davis (9) returns a kickoff for 31 yards during the first quarter of a game last season against UT-Martin at Saluki Stadium in Carbondale.