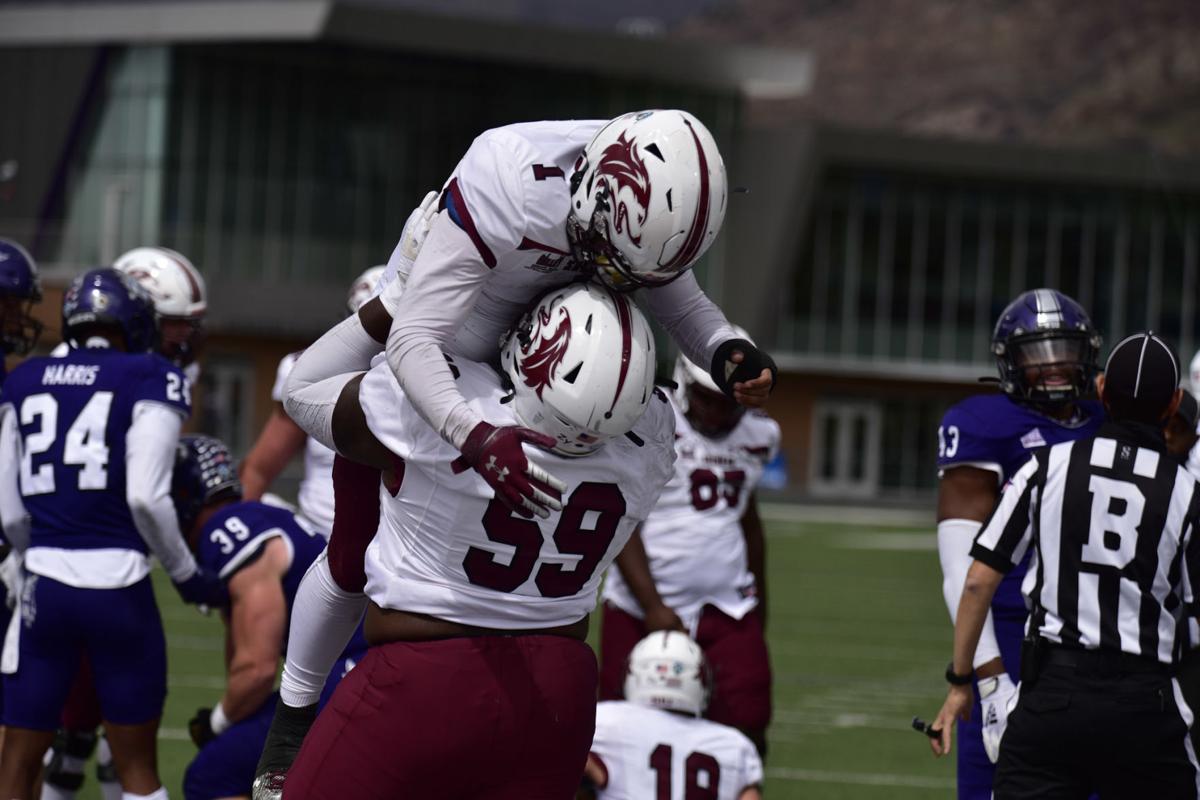 SIU offensive guard ZeVeyon Furcron (59) lifts running back Romeir Elliott (1) into the air on April 24 at Stewart Stadium in Ogden, Utah. The Salukis beat Weber State 34-31 to advance to the FCS quarterfinals. 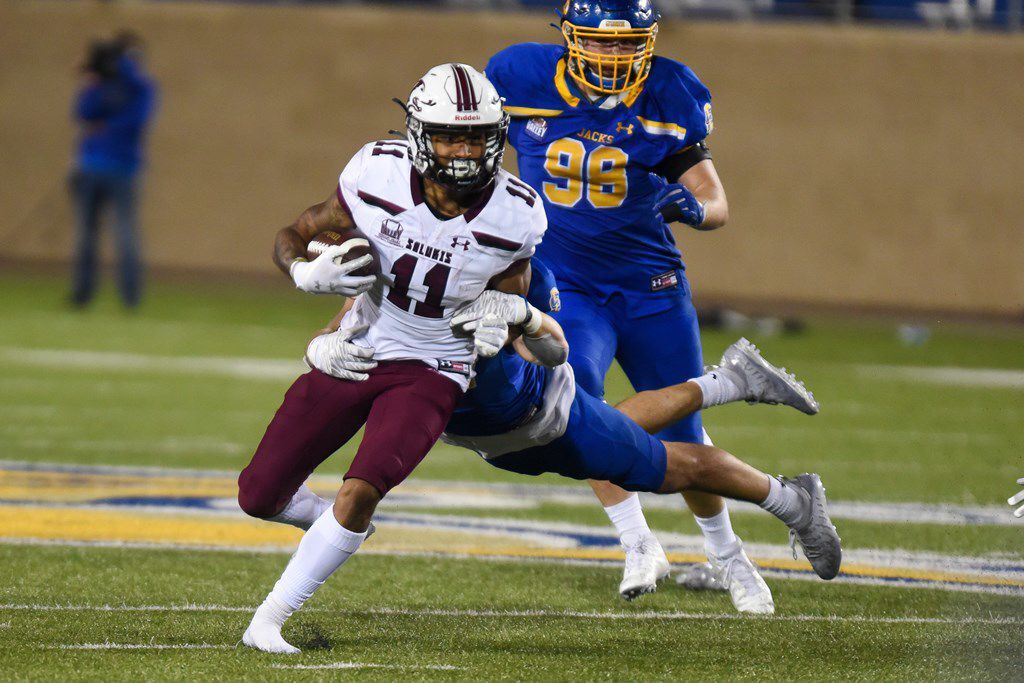 CARBONDALE — SIU's football team knows how to go on the road and get a playoff win, and has been known to pull out all the stops to do it.

The Salukis picked off two Weber State passes in the end zone, got two touchdown passes from former quarterback Stone Labanowitz, and got another one from kicker Nico Gualdoni in their 34-31 win at third-ranked Weber State in the spring. Gualdoni took the ball on a fake extra-point attempt and found a wide-open Cole Steward in the left corner of the end zone for a touchdown that stunned the Wildcats. Steward nearly wasn't at the game after testing positive for COVID-19, but the tight end was able to get two negative tests in a row and got to Utah in time for kickoff. The win was SIU's first road playoff win since knocking off Eastern Illinois in Charleston in 2005.

SIU gave second-ranked South Dakota State, which made it to the national championship game, all it could handle in the quarterfinals the following weekend before falling 31-26 at Dykhouse Stadium.

SIU (7-4, 5-3 Missouri Valley Football Conference), which fell four spots to 17th in the final Stats Perform top-25 poll of the regular season Monday, felt rejuvenated with the at-large bid from the selection committee. The Salukis ended the year losing three of their last four games, but will play at No. 17 South Dakota (7-4, 5-3) at 5 p.m. Saturday. SIU will be going for its second playoff road win in the same calendar year, as well as two straight seasons. Saluki coach Nick Hill believes they can do it after going 4-2 on the road this season.

"I honestly feel like our team thrives at being on the road, and being in a hotel, and being together," Hill said at his weekly press conference Monday. "It's kind of been a norm for them, just, the experience of three or four months ago, five months ago, when we did it in May. We've went on the road and won big games, and we'll have to do it again."

As part of the MVFC scheduling rotation, SIU hasn't played the Coyotes since 2019. The NCAA selection committee put them together for the first time in Vermillion, South Dakota, since Oct. 26, 2019. Under NCAA rules, the committee can't put two teams from the same conference against one another in the opening round of the playoffs unless they didn't play during the regular season. SIU did not play USD or No. 3 North Dakota State (10-1, 7-1), but will get that matchup against the Bison if it's able to get by the Coyotes. As the second seed in the 24-team field, the Bison got a first-round bye and home field advantage throughout the playoffs.

USD will be making its second playoff appearance as an FCS school and hosting its first postseason game at this level. The Coyotes played three Division II playoff games at the DakotaDome, but hasn't hosted any postseason game since December 1986.

Like SIU, USD ended the regular season with a loss. The Salukis lost 35-18 at home to Youngstown State. USD lost at NDSU, 52-24, but had a 34-21 win at Northern Iowa and a 23-20 home win over SDSU. The Coyotes needed a 57-yard Hail Mary touchdown from Carson Camp to Jeremiah Webb on the final play of the game to beat the Jackrabbits.

USD went 4-1 at home, losing 20-14 to unranked Illinois State. Redbird running back Cole Mueller had a 69-yard touchdown run, Kenton Wilhoit returned an interception 22 yards for another score, and the defense forced three Coyote turnovers in the win.

When football coaches spout cliches such as “every play counts” and “every inch matters,” SIU’s playoff berth is what they have in mind.

CARBONDALE — Before Saturday, No. 15/17 SIU looked like a lock to make its second FCS postseason appearance in seven months.

CARBONDALE — South Dakota's football team found ways to win games it didn't play its best, and will be better in the playoffs because of it, a…

"This leg will never be what it used to be", but Tiger is 'on the positive side'

"This leg will never be what it used to be", but Tiger is 'on the positive side'

Players and volunteers get ready for Arab Cup

Players and volunteers get ready for Arab Cup

SIU offensive guard ZeVeyon Furcron (59) lifts running back Romeir Elliott (1) into the air on April 24 at Stewart Stadium in Ogden, Utah. The Salukis beat Weber State 34-31 to advance to the FCS quarterfinals.