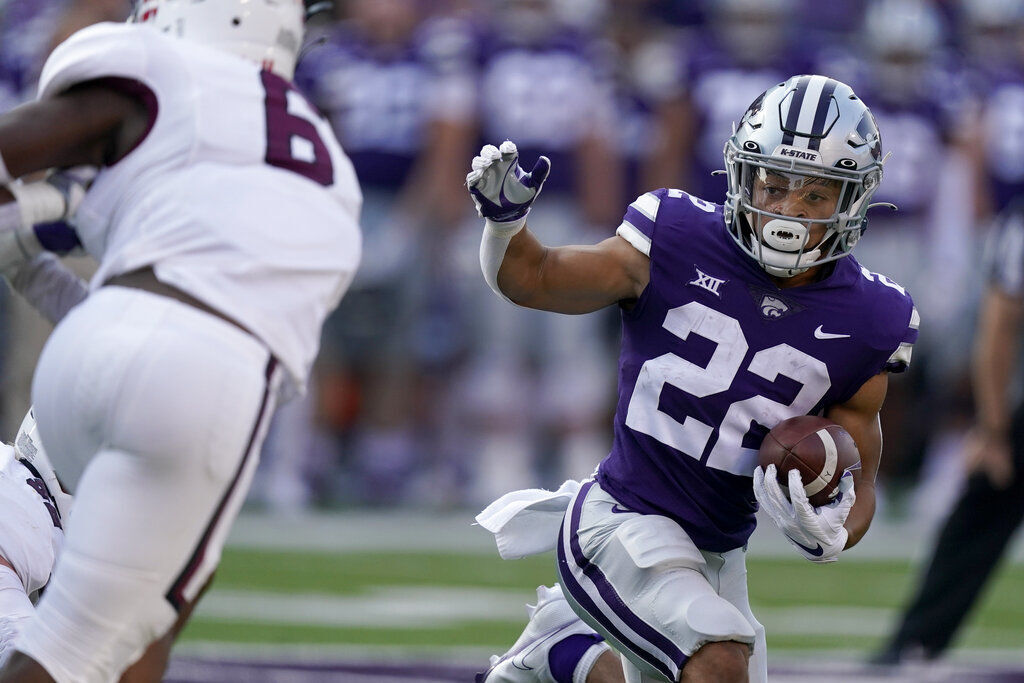 Kansas State running back Deuce Vaughn (22) runs the ball during the first half against Southern Illinois Saturday in Manhattan, Kan. Vaughn rushed for a game-high 120 yards and three touchdowns in the Wildcats' 31-23 win. 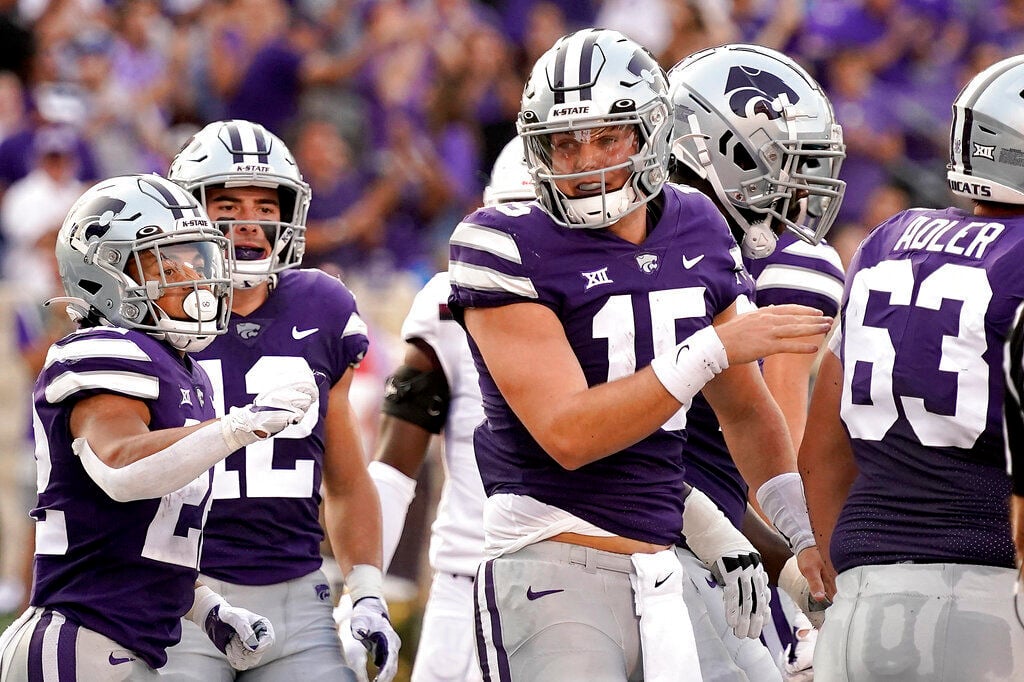 Kansas State quarterback Will Howard (15) celebrates with teammates after scoring a touchdown during the first half against Southern Illinois Saturday in Manhattan, Kan. The Wildcats rallied from 23-21 down at the half to win 31-23 in front of 47,628 fans.

Vaughn, the Big 12 Offensive Rookie of the Year last season, got his fourth straight 100-yard game in the Wildcats' 31-23 win in Manhattan, Kansas. Vaughn had three touchdowns, too, two from four yards out and one on a 1-yard plunge, but was a part of 32 of KSU's 70 offensive plays.

"Honestly think that if you would have told me we would have had the game against him, he probably ended up with a lot of yards, but I'll take that performance, and I bet a lot of people would trade our performance," SIU coach Nick Hill said. "He didn't have the big explosive run for a touchdown that we talked about. They're going to hand it to him a lot. He's one of the best backs, really, in the country, and will rush for 1,000 yards, and he'll have some big-time runs, and I felt like our guys tackled him well, rallied to the ball."

Vaughn, a 5-foot-6, 173-pound sophomore, rushed 26 times for 120 yards at Bill Snyder Family Stadium. He also caught two of six passes toward him. His longest run was 16 yards. Hess, a preseason All-Ohio Valley Conference pick for the Redhawks, rushed for 104 yards on 18 carries but didn't score in SIU's 47-21 win to open the season.

KSU (2-0) hurt No. 8/9 SIU (1-1) more through the air in the first meeting between the two programs in football. Starting quarterback Skylar Thompson had a 43-yard pass to Malik Knowles on the opening drive that led to a 7-0 lead, and hooked up again for 50 on another scoring drive.

Backup Will Howard, who came in when Thompson went down with an apparent knee injury, completed 8 of 17 passes for 76 yards. Howard also rushed for nine yards on eight carries, including a 1-yard touchdown run. Howard sailed a pass in the middle of the field late in the first half, which cornerback P.J. Jules returned 41 yards for a touchdown and the lead.

The Salukis couldn't hold it in the second half. Taiten Winkel hit a 34-yard field goal to put the Wildcats up 24-23 in the third quarter, and Vaughn finished off a 59-yard drive with a 4-yard touchdown run with 1:57 to play.

SIU got all the way to the KSU 21 in the final minute before falling short. Quarterback Nic Baker was sacked by end Felix Anudike-Uzomah from behind and fumbled. Tackle Timmy Horne recovered at the 25, and Howard ran out the clock after taking a knee.

"Well we are excited to get the win against a good Southern Illinois team. I know the league really well that they play in and I know they have really good football players," said KSU coach Chris Klieman, a former head coach at North Dakota State. "Next thing it was 21-9 and then the flood gates opened because we couldn't hang on to the ball offensively, and next thing you know, we’re down 22-21 with four turnovers at half and probably deserve to be down more. I talked and said 'You just gave them life, and it's going to be a four-quarter game, period, because these guys are playing with confidence."

SIU Football | 4-Down Territory: Salukis' leading tackler could be out until October, Dayton wins and UNI's Cuvelier named national player of the week

Linebacker Bryson Strong could be out a few more weeks, a look at Dayton's win over Eastern Illinois, and Northern Iowa's Spencer Cuvelier hon…

SIU Football | Dayton still getting to know each other

CARBONDALE — With 14 new starters and a 650-day-plus layoff, Dayton's football team was still learning about itself Saturday against Eastern I…

SIU Football | 4-Down Territory: What kept Chamberlin at Dayton, the end of the Big Sky/MVFC series, and UND's quick points

Longtime Dayton coach Rick Chamberlin talks about what kept him there all these years, the last weekend of the Big Sky Conference/Missouri Val…

CARBONDALE — SIU's football team is back home after defeating Southeast Missouri State on the road, and almost defeating Kansas State at Bill …

Kansas State running back Deuce Vaughn (22) runs the ball during the first half against Southern Illinois Saturday in Manhattan, Kan. Vaughn rushed for a game-high 120 yards and three touchdowns in the Wildcats' 31-23 win.

Kansas State quarterback Will Howard (15) celebrates with teammates after scoring a touchdown during the first half against Southern Illinois Saturday in Manhattan, Kan. The Wildcats rallied from 23-21 down at the half to win 31-23 in front of 47,628 fans.